Patty Jenkins has brought blue skies back to the DC Universe.

With her soaring epic Wonder Woman,
the director chronicles the origins of the world’s most famous comic
book heroine, taking Diana from the pristine shores of Themyscira into
the frontlines of the Great War. Statuesque Israeli actress Gal Gadot
reprises her Batman v Superman: Dawn of Justice role as the
Amazon princess whose idyllic existence is irrevocably changed after
handsome spy Steve Trevor (Chris Pine) crash lands on the island
paradise.

He brings with him unwelcome news that the outside world has been swallowed up by conflict – which sounds to Diana like the work of Ares, the cruel son of Zeus who has long wished for humanity’s destruction. She insists Steve deliver her to Europe’s battlezones so she can find and slay the bloodthirsty god, ushering in a new era of peace. Along the way, Steve becomes smitten with his new ally – because of course he does.

Wonder Woman is only the second feature from the director, whose gritty 2003 debut Monster earned Charlize Theron a Best Actress Oscar for her portrayal of Florida serial killer Aileen Wuornos. In the intervening years, she’s helmed episodes of TV series ranging from Arrested Development to The Killing, but with her latest project, Jenkins becomes the first woman ever to step behind the camera for a superhero blockbuster.

And not just any superhero: Wonder Woman is a feminist icon, a character admired for her wisdom, her kindness and her strength – and one who has had Hollywood scratching its head for years, seemingly unwilling or unable to determine how to do her justice on the big screen.

Jenkins had no such uncertainty. Adopting the same classical approach Richard Donner brought to his landmark 1978 comic-book movie Superman, she set out to craft a good, old-fashioned action-adventure that wasn’t afraid to make room for warmth, humor and romance. So far, it appears to be a winning formula; early reviews were nearly rapturous, with Wonder Woman hailed as the best offering from DC since Christopher Nolan’s The Dark Knight. (Indeed, even a Twitter controversy trumped up by so-called “men’s rights activists” over Alamo Drafthouse’s plans to hold women-only screenings of the film hasn’t succeeded in tarnishing its reception. Alamo responded by simply adding more.)

As Wonder Woman storms into theaters, we spoke to Jenkins about her ambitions for the film and how she set about capturing the right tone – and whether she’s ready to break out the Amazon regalia once more for a sequel.

It looks like you’re taking it to the patriarchy this weekend.
It’s so crazy. I had assumed it would be a much more jaded reception … particularly in a world where there were questions: Do people want to see her? I always thought, Of course people want to see her! It’s awesome that that’s true.

You lobbied for years to direct Wonder Woman. Why?
I love a great myth. I love a superhero origin story. I had been profoundly touched by Superman when I was a kid; it had this special place in my heart. The idea that you could both make a tentpole movie that’s being totally supported [by the studio] but also make something uplifting and magical and personal – just a single character’s arc – was exciting to me. And I love Wonder Woman. I couldn’t believe that nobody had done a Wonder Woman movie yet. It just seemed like the most obvious thing in the world to do.

How did Donner’s film influence the choices you made with your film?
I watched it very carefully. I was fascinated by how… it was really an adult film with actors taking it seriously and also having a good time. It hit these pockets so perfectly of comedy, action, romance. That balance was an inspiration to me. I wanted to do something that felt as good to go and see and have that adult stuff going on simultaneously. 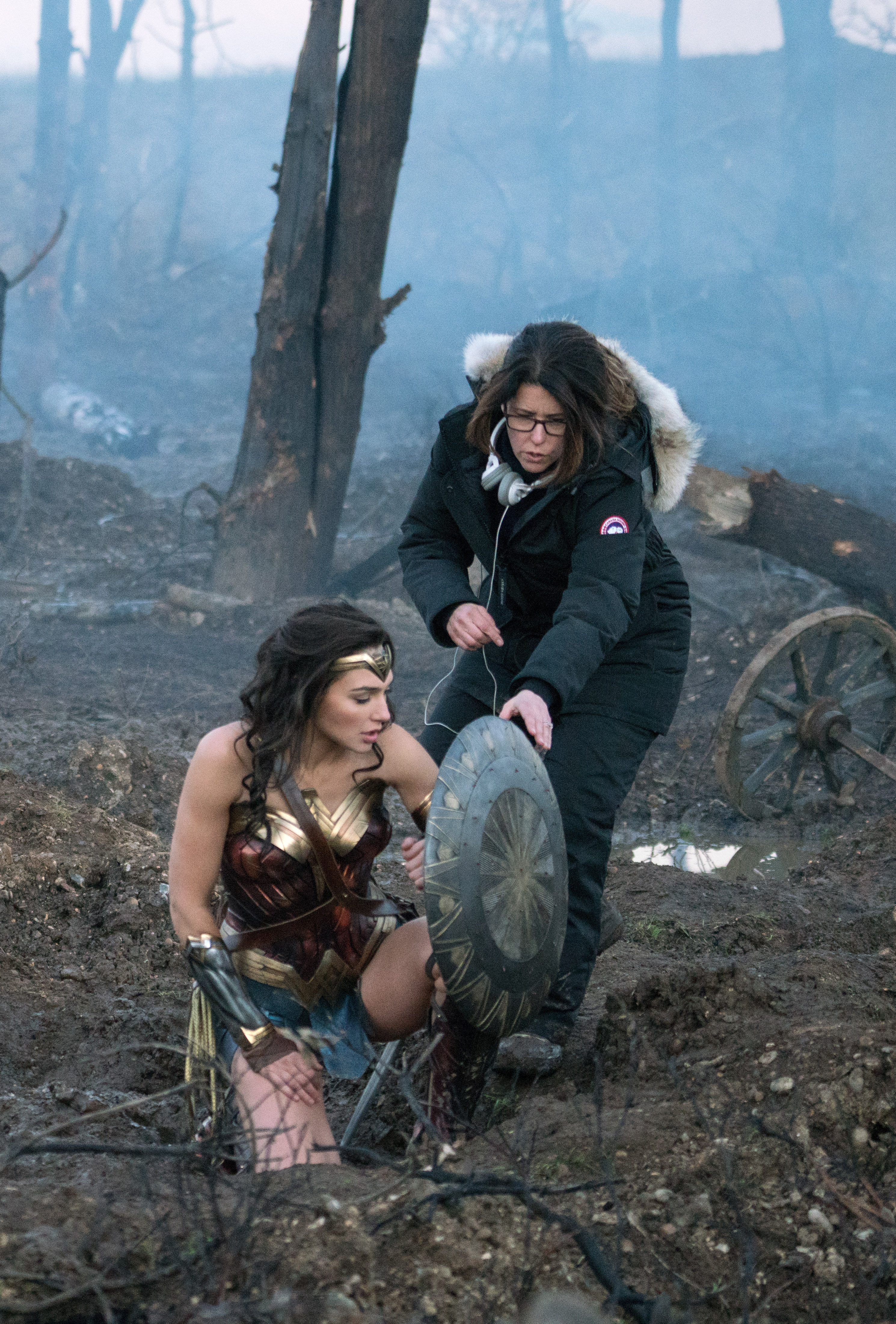 There are very dark moments in the story, but the overall tone is far brighter than some other recent superhero films. Diana is optimistic – her humor and her wit really sparkle.
If you look at the history of Wonder Woman, you look at the iconography, the images that have kept her alive – they’re not dark. The thing I think is so important to always keep in mind about her is how positive and bright and shiny she is – very much in the same way that Superman has been. Staying true to the spirit of that seemed incredibly important to me. And it’s the kind of superhero film I believe in anyway. I felt like the classic romantic superhero film is not one that I see a lot of people doing right now, so I felt like it was a great space to make this.

From its inception, I understood the importance of the scene [in the no-man’s-land]. All my eggs were in that basket. That was the biggest turning point in the movie for her. It wasn’t the most obvious scene to some of the people working with me because she’s not fighting anyone, but I knew that scene had to have absolutely everything. A lot of time was spent on the storyboarding and the set-up. Down to the very last day of finishing the picture, that was one of the scenes I was caressing, saying, is it all it could be?

Would you say the film feels like a turning point in terms of female representation on screen and behind the camera?
In the way Superman affected my life, I don’t know how different it would have been if it was someone I identified with even more. I have an eight-year-old son. Watching his attitude shift from being a kid who’s stuck in all the classic “I-can’t-wear- that-shirt, it’s-too-girly” to needing every incarnation of the Wonder Woman doll and saying, “I have to have her to fight in the battle, I’ve got to have Wonder Woman” … it’s hard not to get emotional. He’s going to grow up thinking that, of course, some of the women you know are going to be princesses. And some of them are going to be princesses who fight side by side with you in battle.

You also must have been under a great deal of pressure, right?
A tremendous amount of pressure. Even though I knew I was allowed to make a PG-13 movie, I knew little girls were going to see it whether I wanted them to or not. The pressure to be aware of them as an audience at all times and make the movie I was tasked with making was very loud.

What about the conversations surrounding your being at the helm of a comic book film of this size and scope? Was there pressure there as well?
That’s one I try to tune out. Of course, I’m aware of it. I tried to complain about [an aspect of] directing at some point a long time ago to a friend of mine who’s an actor, and he said, “I’ve seen every director I’ve ever worked with go through that.” I always try to remember that. It’s not easy for anyone.

How did this experience change you as a filmmaker?
It’s interesting to direct something so difficult but also something that you love so much. I learned a million little things about execution of this kind of movie and longevity of vision, having to hold the center because really only the director does. That’s a big task to be the person who stays super clear. The most incredible thing about it is to see Gal and my true intentions come back at us the way that they are. I assumed we’d be sending our best effort out into a much more jaded world. To have such pure response come back from people talking about heroes, talking about the future, talking about love – that blows my mind. It’s so powerful that what I wanted to talk about is also what everybody wanted to talk about. That’s a beautiful, uniting experience to make a film that does that.

And what you wanted to talk about was the healing power of love?
We need a new kind of hero. It’s not easy to be a hero. You do it because of what you believe, not because of what other people deserve. I wanted to talk about the fact that we can’t defeat the evils upon us by slaying one villain. We’re facing a time where each country has such legitimate complaints against each other and this has all been going on for so long that if we’re going to come to a world of peace in the future, we have to lay down the past and become responsible heroes ourselves. Often what that requires is love and peace instead of battle. That is a hugely important message to the world right now from my perspective.

It sounds like plenty of material for a sequel. Are you ready for Wonder Woman 2, then?
Yes! That’s all I can say about it, but yes.

Watch below: From ‘Girls Trip’ newcomer Tiffany Haddish to ‘Recode’ founder Kara Swisher, here are 10 women you need to know.