'Wind River': Taylor Sheridan on Why He Needed to Make This Modern Western - Rolling Stone
×

Taylor Sheridan is going to go test-drive some horses. That is the exact phrase he’s just used: The 47-year-old actor-turned-screenwriter-turned-director is in his car, heading to Spanish Fork, Utah, for the express purpose, he says, of taking a few thoroughbreds out for a spin like they were a couple of Ford Mustangs. “It’s for a TV show I’m doing,” he claims, referring to the forthcoming family drama Yellowstone he’s prepping. “But yeah, I highly recommend before you buy any, maybe take ’em for a spin. You know that saying, ‘You broke it, you bought it’? With horses, if you don’t make sure it’s a good fit … they tend to break you.”

Sheridan handled plenty of horses on the ranch he grew up on in North Texas, before he moved to Los Angeles to make a stab at showbiz; take one look at him, all compact frame and weathered masculinity, and you realize he’s one of the few modern actors that would make a convincing onscreen cowboy. And after several decades of bit parts, “Cop No. 3” roles and a brief but recurring turn on Sons of Anarchy, he was seriously contemplating moving his family to Wyoming and becoming a full-time wrangler. He was frustrated, stifled, at a dead end. Better to rope fillies and have some dignity, he thought.

'Hell or High Water': The Story Behind Summer's Sleeper Hit

What happened next has become the stuff of contemporary Hollywood lore. Sheridan decided to try his hand at penning a few spec scripts, despite never having written any previously. Within six months, he had finished three of them. Miraculously, he had sold two of them right away. Even more miraculously: One was Sicario, the tense Feds-vs-drug-cartel thriller starring Emily Blunt, Josh Brolin and Benicio Del Toro that topped a lot of 2015 year-end lists. The other was Hell or High Water, the sleeper hit of 2016 that garnered Sheridan an Oscar nomination for Best Original Screenplay.

As for the third one, which Sheridan titled Wind River … well, that one was different. The other scripts had been written to sell as projects for other filmmakers. This one, he felt in his bones, was meant for him to direct. “All three of those scripts … I mean, they’re all personal,” Sheridan admits. “But when other directors started poking around for that one, I found myself getting kind of protective of it. I wanted the vision executed exactly as I saw it in my head. There was a lot in this story, in the wrong hands, could come off as offensive.

Sheridan has done both. Wind River, which opens in wide release today, follows a wildlife tracker (Jeremy Renner) and an FBI agent (Elizabeth Olsen) hunting down a killer in the snowy mountains of western Wyoming. The former has stumbled across the frozen body of a teenage girl from the nearby Native American reservation; the latter has arrived from Las Vegas to spearhead the homicide investigation. For him, the death opens up some painful past wounds. For her, the immersion in a culturally unfamiliar world, one with its unspoken rules and deeply embedded culture clashes is extremely disorienting. And for anyone who’s seen a crime thriller with a grisly murder at its center, the sense that you are watching a particularly taut, unbearably tense example of the genre is enhanced by the fact that its creator isn’t afraid to throw formal curveballs – like a face-off on the verge of getting violent that suddenly turns into an expository flashback – to keep folks on their toes.

“You have to remember, I was an actor in procedural television for 20 years,” Sheridan says. “So I know that structure really well – and I know how limiting it can be. This movie is basically CSI: Wyoming! But having had my life dictated by those rules for so long, I’ll admit that there’s a petulant defiance to them that comes out in my writing. You essentially leave the main character of Sicario for most of the last third of the film; most people would tell you why the brothers in Hell or High Water keep robbing certain banks near the story’s beginning instead of almost at the end. And here, that opening image of a woman we don’t know, running in the snow for reasons that aren’t explained … I wanted the audience to feel immediately out of their element. You’re in a completely different world now.”

And it was that world, he says, that made him reluctant to hand Wind River over to someone else. Over the years, Sheridan has spent a good deal of time with the region’s Northern Arapaho and Eastern Shoshone population; he’s mentioned in past interviews that the strong roles that females play in Native American culture inspired the female protagonist of Sicario and that he’s seen a lot “res life” firsthand. The idea of giving the film to a director who’d consider the setting merely an exotic backdrop for two white characters – without addressing the issues its population faces at all – was simply not something that sat well with him. 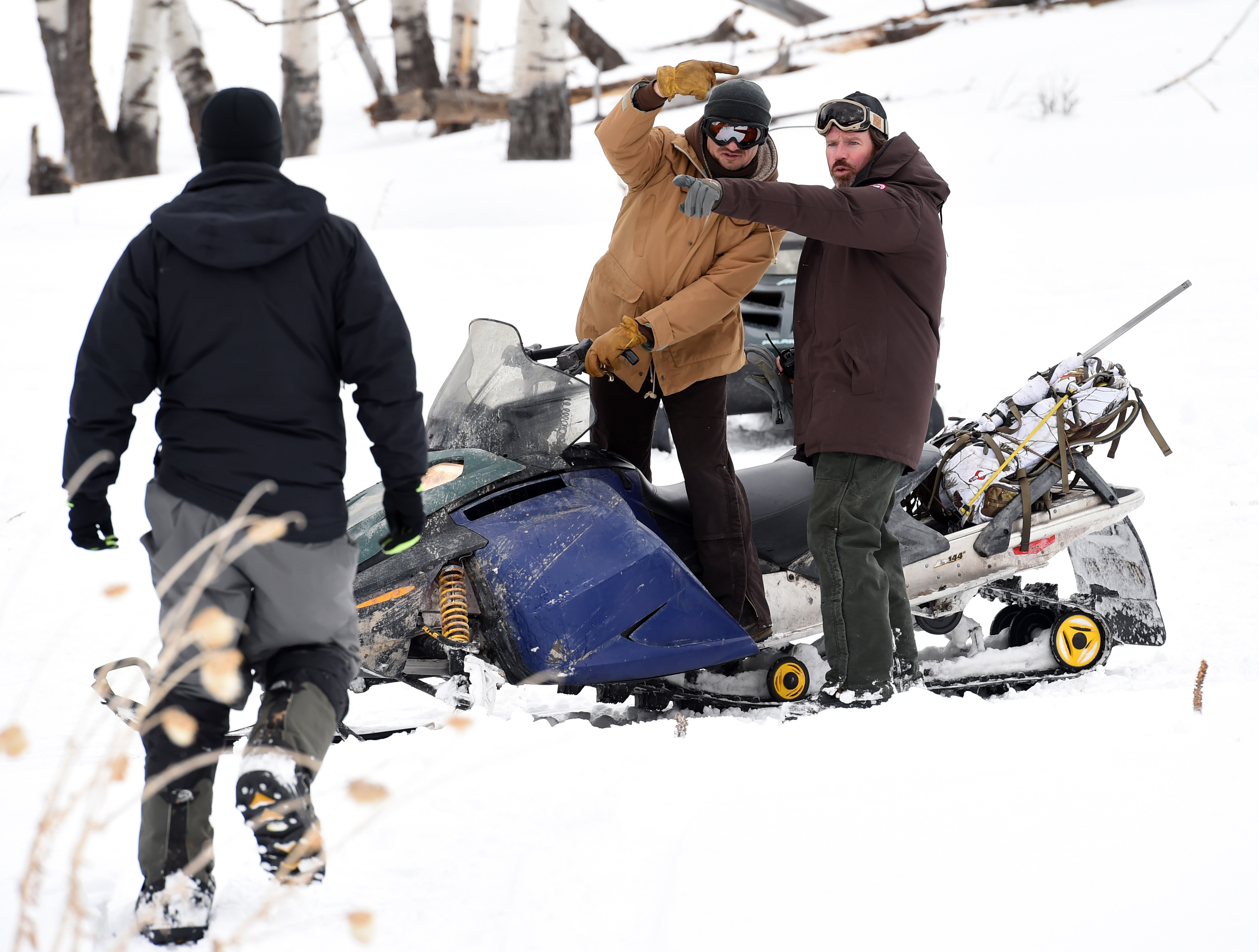 “I have a good deal of friends in Indian Country,” Sheridan explains, “and it required a lot of trust on their part for me to tell this story. And the only way I could guarantee that these things were handled in a way that did not betray that trust was for me to do it. I’ve built enough of a relationship with that community that I could go, ‘I’m thinking about doing it this way – is that ok?’ Which was a question I asked a lot. A person who’s never spent time in that world, or who would go at it in what some people call a ‘Social Justice Warrior-y’ kind of way …” He stops and laughs. “There are certain things they’re just not going to get.”

Sheridan claims that, while he never writes with actors in mind, he kept thinking that both Renner and Olsen would be “very, very right” for the roles. Luckily for him, Renner, who’d just become a father, was interested in the idea of exploring “that fear of failure you have when you’re a parent, which is a big part of the story.” And though Olsen says she initially didn’t see a lot of herself in this fish-out-of-water Fed, the actress was intrigued by the fact that she was even up for the part.

“It was, ‘You want me for this?'” she says, in a separate phone interview. “Then I met Taylor, this cowboy who’s like a combination of your dad and the Marlboro Man, and it’s … when you talk to him, you’re going to get the most brutally honest answers imaginable. So I thought, ok, if he sees something in me that he thinks is capable of playing her, then this could work.” Olsen spent six months doing physical training – “a lot of martial arts, a lot of self-defense” – and some preliminary firearms training three months prior to getting to the Utah set. “I’d send tapes of myself to Taylor’s cousin-in-law, who’s a Green Beret and a weapons trainer. I’d get back comments like ‘Adjust your stance by three inches.’ It was that specific.”

Olsen also began “to train like I was going to hike Machu Picchu, because I hate extreme cold. Taylor actually tricked me, because I kept saying I didn’t think I could film a movie up in the hills and at that altitude. He kept saying, listen, you’ll be sweating in all your layers up there, relax. And of course it was fucking freezing.”

“Let’s get something straight: I did not trick Lizzy,” Sheridan notes when the exchange is brought up. “I flat out lied to her! She kept asking, ‘Is it cold up there?’ and just kept saying, ‘Nah, it’s the spring. People ski up there in bikini tops, are you kidding me? It’ll be great!’ Easily the best acting I’ve done in years.”

As for the notion that Wind River, which Sheridan says is part of a loose trilogy that looks at the American Frontier’s mythology through a modern lens, hides an attempt to shed light on how indigenous people are still fighting for basic civil rights in contemporary America under the guise of a thriller, he quickly mentions the remarks that distributor Harvey Weinstein read when the movie won an award at Cannes: “There is nothing I can do to change the issues afflicting Indian
Country, but what we can all do as artists – and must do – is scream
about them with fists clenched.” He also brings up one of Wind River‘s most arresting shots, in which the twin totems of Western iconography – the “cowboy” and the “Indian” – sit together in front of an empty swing set, both done up in the most straight-out-of-Central-Casting costumes imaginable.

“The fact that they both look like that is not a coincidence,” Sherdian admits, “I am trying to demolish the stereotype behind those particular images with that scene. It’s no longer the concept of two enemies fighting for the land; it’s just two best friends bonded by pain, survival and the idea of making their world a better place to live. But listen, it’s also not a coincidence that the scene I just described happens in a thriller and not a ‘social issues’ drama. I don’t like being lectured to when I go to the movies, and I don’t imagine other people do either. I’m here to entertain. I like playing against expectations. And if you can tell my political affiliations by watching one of my movies, then I’ve failed.”

“But,” he quickly adds, “I want people leaving the theater with something to think – and think hard – about. My job is not to give you all the answers. My job is to ask the questions.” And with that, Sheridan says goodbye. Those horses are not going to test-drive themselves.