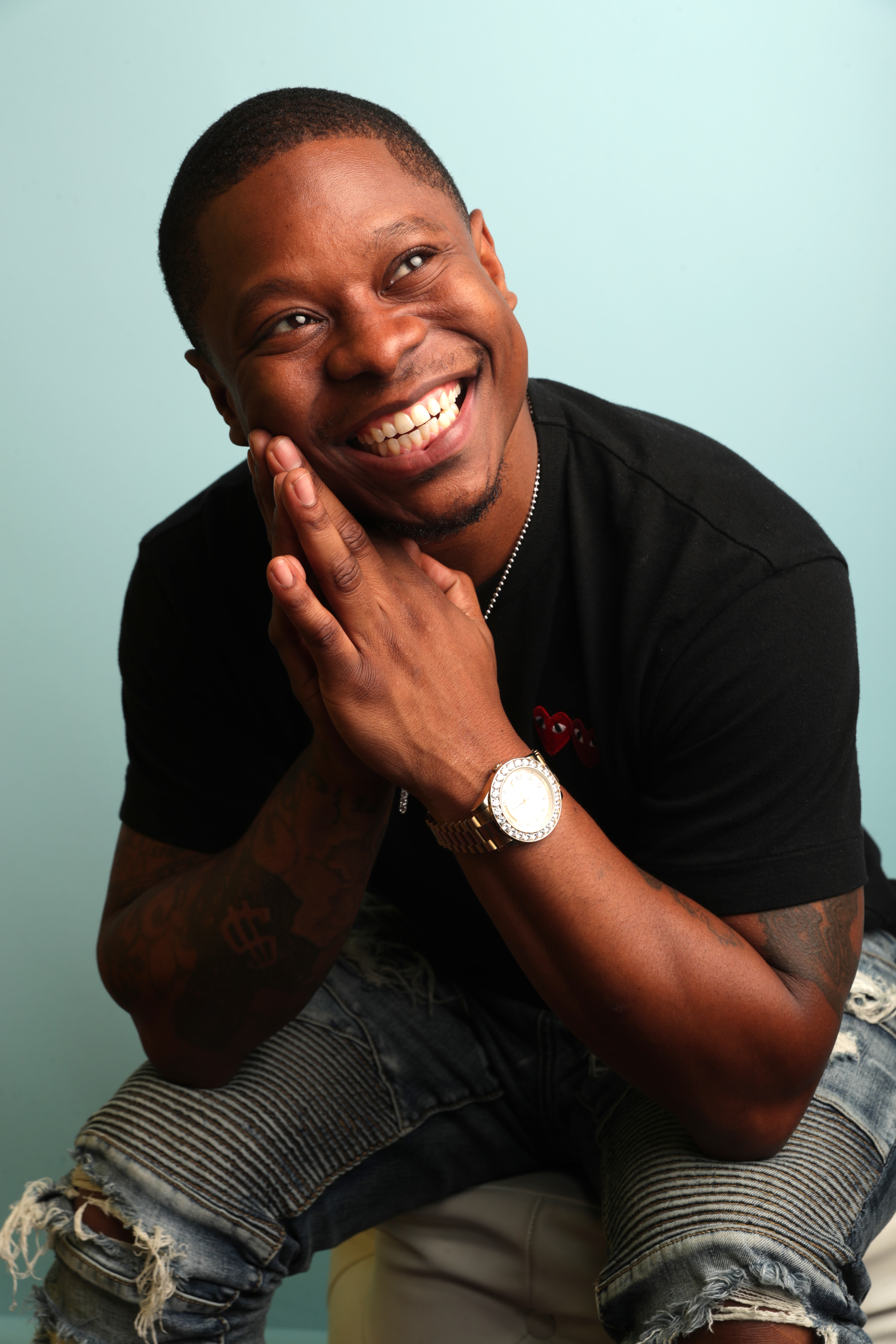 Jason Mitchell is apologizing for being tired. The 30-year-old actor is pouring a double espresso into what may be the single blackest cup of coffee ever brewed; he just flew straight from Chicago to New York this morning, right after he wrapped his new Showtime series The Chi about life in the South Side, then got whisked to a photo shoot. Somewhere in there, he managed an impromptu nap. He’s been busy and a little burnt out, Mitchell admits as he leans back on a hotel lobby couch, heavily tattooed arms folded behind his head. Maybe he’s been pushing himself a bit too much. But Mitchell is not so exhausted that, after a couple of gulps of his customized supercaffeine beverage, he won’t enthusiastically wax poetic about the time he had to force another actor to call him a racial epithet.

“Yeah, like, Jonathan Banks wouldn’t say ‘nigger’ to my face,” Mitchell says, laughing loudly. He is referring to a scene in Mudbound, the upcoming period drama about two families – one black, one white – dealing with poverty, post-WWII PTSD and racism in the rural 1940s South. At one point, Mitchell’s character, a soldier who’s just returned home from fighting Nazis in France, refuses to leave a shop by the back door after being confronted by redneck bigots – including Banks’ patriarchal peckerwood. It turns out the Better Call Saul star was less than comfortable using the n-word on set.

“We’re rehearsing it, and he kept going, ‘Man, people are so fucked up, I can’t say it,'” Mitchell recalls. “I told him, ‘Yeah, they are fucked up … but I’m ready to kick this scene’s ass!’ I gave him permission because it’s like, I gotta kick this up a whole other notch. You know, ‘Jonathan, you and me are tight … Say it, and we’ll hug it out afterwards!'” The older actor finally gave in. When you watch Mitchell in that scene, you can see onscreen how his reaction runs the scale from sorrow to rage and back again. One notch, officially kicked up. Mission accomplished.

In fact, Mudbound, which costars Mary J. Blige, Cary Mulligan and Garret Hedlund, and got a standing ovation when it premiered at Sundance back In January, could establish Mitchell as  the closest thing to this generation’s Denzel Washington. It also caps off what’s been a two-year-long streak for the New Orleans native, which the actor says began with the moment he was told that producers, tipped off by Mark Wahlberg, were considering him for the part of Eazy-E in the N.W.A biopic Straight Outta Compton. “I got to know Mark a little bit when he shot this movie down where I’m from,” Mitchell says, referring to the 2012 thriller Contraband. “He brought me along for this other film he was doing [2013’s Broken City], gave me some good advice and then mentioned my name when they looking for someone. My first thought when I got the call was, ‘The godfather … that’s who they think I can be?!?’

“My second thought,” he continues,” was, ‘Man, if I fuck this up, it’s like: Don’t bother coming back to L.A.,'” he jokes. “You know, ‘You messed up Eazy?!? Your California privileges are revoked.’ I just wanted the family to be cool with it. I figured, if I do justice to him and the group, I should be okay. And then it all just took off.”

His portrayal of the “godfather” of West Coast hip-hop quickly escalated Mitchell to holy-shit-who’s-that-guy status and a series of supporting roles in movies like Keanu, Kong: Skull Island and Detroit. It was his role in Compton, however, that got the attention of Mudbound director Dee Rees, who saw him go from stalking onstage to slowly wasting away in a hospital bed and thought, that’s the guy. Once casting on her epic historical drama began, she told her producers she had to have him. “I think what I said was, ‘It’s Jason or nobody,'” Rees confirms over email. “He has a wisdom,  a kind of behind-the-eyes quietude and a calm bravery on-screen. When it was time for the doorway showdown, most actors would’ve gotten flustered. Jason moved through it with such grace and aplomb. He’s the real deal.”

The result is generating Oscar buzz for Mitchell, who’s already got more than enough projects lined up for the next year – in addition to the Showtime series, he’s got a guys-weekend-gone-awry thriller (Tyrel) and a drama about a prison inmate working with horses (Mustang). Having worked with Rees, The Chi‘s showrunner Lena Waithe and Detroit‘s Kathyrn Bigelow, he says he wants to keep doing more projects with female filmmakers. “They have more finesse on set,” Mitchell muses, “especially Big Kat, which I what I called [Bigelow]. Even though Dee is more run-and-gun, you know, it’s the same thing. They seem to get more done with less words, I’ve noticed.” Most importantly, he says, he wants to use any momentum he may have right now to help movies like Mudbound and Detroit get out in the world.

“You know, my grandfather fought in the Korean War, not World War II … but Mudbound is really his story,” Mitchell says. “He’s 87, he’s been through some shit – and he’s never seen his  life onscreen before. So the fact that I may get to walk down a red carpet with him and show him his story up there, in a movie theater, two generations later …” He almost tears up for a second before gulping down the rest of his coffee. “That’s why I do this.”