Julia Nash felt as though she’d stepped into a Wax Trax! Records museum when she started looking through Dannie Flesher’s belongings. Flesher had cofounded the pioneering industrial label in 1980 with his life partner, Julia’s father Jim; they were responsible for putting out important releases by Ministry, KMFDM, Front Line Assembly and My Life with the Thrill Kill Kult, among others. When Jim died of AIDS in 1995, his partner tried to keep the label and the couple’s Chicago record store going. Flesher eventually retired to Arkansas, where he, too, succumbed to a bout of pneumonia in 2010. What Julia didn’t know is that her dad’s significant other had also held on to nearly everything Wax Trax!-related and stashed it away for safe keeping.

'Gunda': An Intimate Portrait of a Sow's Life

So she had gone to Arkansas with the hopes of recovering her father’s ashes, only to find herself embroiled in a legal battle for custody of his items. Because the state wouldn’t recognize Jim and Dannie as a legal couple, she had to jump through hoops so everything wouldn’t end up “in a burn pile,” she says. “I don’t think Dannie’s family understood the relevance and the history that was there,” Julia’s husband, Mark Skillicorn, adds. When they finally started sifting through the belongings, they uncovered the original Wax Trax! record store sign, contracts from the label’s later years and rare recordings by Coil, Ministry and Thrill Kill Kult. “I don’t even think I still have the words to describe how it felt looking at all of that,” she says. Her daughter, who was a junior in high school at the time, filmed them excavating the storage space — and that footage kicked off what would become a documentary about her father and Flesher’s legacy.

Industrial Accident: The Story of Wax Trax! Records traces the label’s history from Jim Nash and Dannie Flesher’s affair (ending Nash’s marriage to Julia’s mom) to the opening of the first Wax Trax! record store in Denver. Once they moved to Chicago in the late Seventies, they launched their label with releases by local artists like Strike Under and Ministry (as well as the drag queen Divine) and found their footing with industrial music. In the doc, Steve Albini talks about how the record store was important to Chicago; Ministry’s Al Jourgensen describes the community surrounding the label; and Trent Reznor explains how it proved to him that interesting music could come from the Midwest, where he’d grown up. Other talking heads include KMFDM’s Sascha Konietzko, former Ministry member Paul Barker, Jello Biafra, Dave Grohl, Ian MacKaye and Chris Connelly. “Just to boil it down for a 95-minute narrative is crazy,” says Julia, who directed it. “There are probably seven other 95-minute stories in there.”

She started giving the film screenings last spring and recently heralded its soundtrack release with a series of events that paired a showing of the movie with a performance by Ministry, which played an “old-school set.” Although the Brooklyn event attracted a line around the block of people dressed ghoulishly in black, Julia has been happy to see the doc reach wider audiences too. “There have been a ton of people at these screenings that really have had no idea what Wax Trax! was about,” she says. “It’s been amazing seeing people recognize that this is a love story overall about two guys who, against many odds at the time, really made things happen and didn’t give a shit.”

“I guess we didn’t realize that it was more than just a label with some great bands on it,” says Skillicorn, the film’s screenwriter, who is on the same call as Julia. “It was much more of a cultural touch point. This was a pioneering label for a community that defied some of the stereotypes of what was happening. It was for a lot of people that had no experience with anybody who was gay. It’s like the other side of the coin.”

“Gay people can like something else besides Cher?” Julia rejoins sarcastically. “That is crazy.” 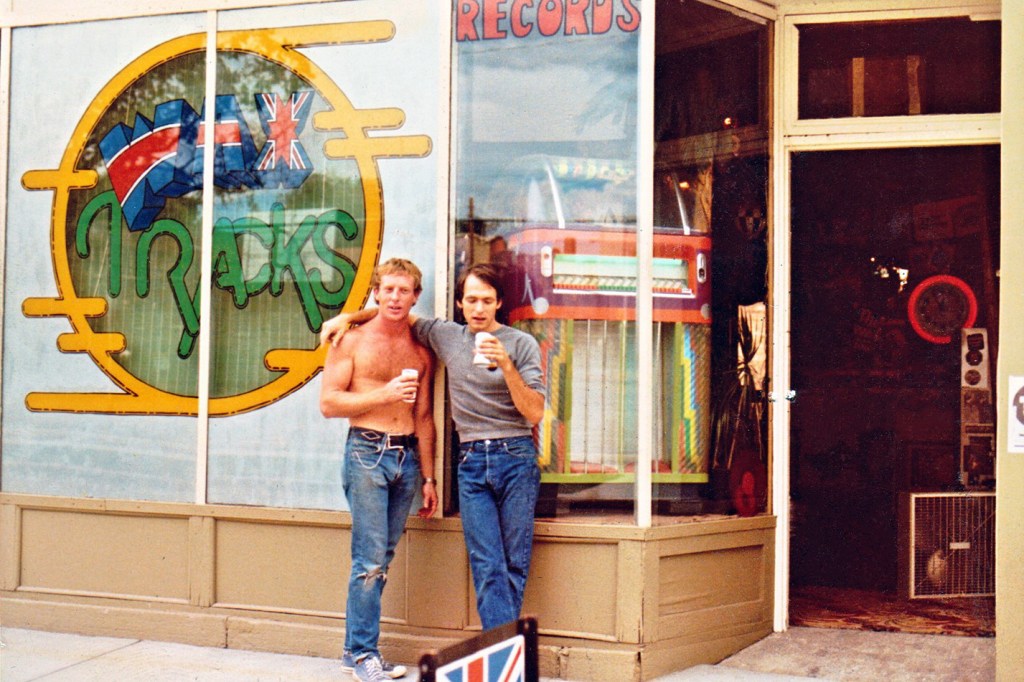 Jim Nash and Dannie Flesher outside of their Denver location in 1975. Photo courtesy of Wax Trax!

The record store and the label offices were a second home for Julia when she was growing up. Although she was more interested in “other music” growing up, she grew up looking at musicians like Jourgensen and Thrill Kill Kult’s Frank Nardiello like big brothers. “Frank and I would go to lunch almost every day at this local diner,” she says. “He taught me how to ‘rockercise’ — exercise to rock music. And Al is a sweet, sweet guy. He gave me my first car, this lemon-yellow 1972 convertible [Volkswagen] Karmann-Ghia. My dad drove it to Kansas City, where I was living [with my mom] and proceeded to paint it black with a paintbrush. But prior to that, my dad spray-painted it two giant boobs on the hood. After he painted over it, the spray paint still kind of came through, and it was really nice driving to high school in that.” She laughs.

After the label declared bankruptcy in 1992, Jim and Flesher sold it to TVT Records and the couple also slowly divested themselves personally of the label and eventually the store. Julia says she never heard her father express regret over how it all fell apart. “In hindsight, he said, ‘I wish I would’ve had people sign contracts,’ but other than that, I don’t think he would have changed anything,” she says. Around the time he became sick, Julia had just had her daughter and what he cared about changed. She found it hard to keep the store going with Circuit City and Best Buy selling CDs for cheaper than cost and eventually it closed.

In 2011, after Flesher died, she put together a three-night celebration of the label she dubbed the Wax Trax! Retrospectacle in Chicago. The concerts featured performances by Front 242, My Life With the Thrill Kill Kult and former members of KMFDM and Ministry. The positive turnout changed the way she’d seen her father’s life’s work. “I had no idea that the connection that that store, the label, the music, my dad and Dannie had with people, how it kind of altered the course of their lives in a way,” she says. “So the really touching stories from the fans are really what made us think about doing the film.” 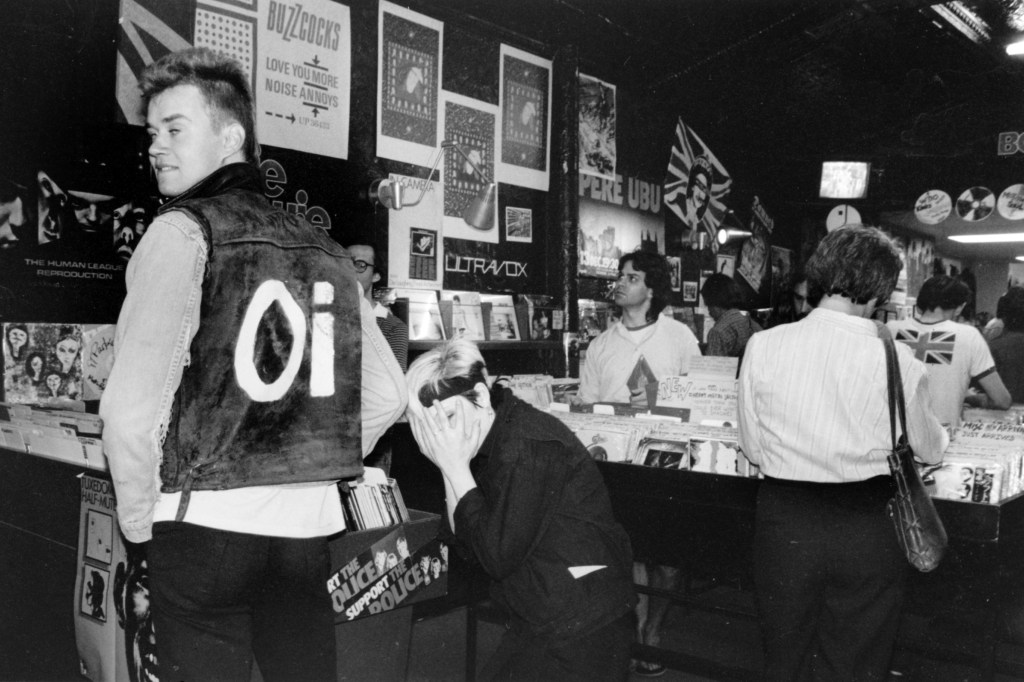 Even though the doc is now available on Blu-ray and DVD, Julia is still sorting through the treasures she found in Flesher’s storage space. The Wax Trax! label recently issued a soundtrack album for the movie, which features 15 previously unreleased recordings and mixes of songs by Thrill Kill, Revolting Cocks, Ministry, KMFDM and others. She and her husband hope to compile a coffee-table book history of the label at some point in the future.

“It’s been years, and we’re still trying to get through everything because it’s just a staff of us,” Skillicorn says. “So when we get that properly catalogued, we can start to work with one of our designers and come up with something that’s good. Quality is a big deal to us.”

“We were joking the other day that it was going to have to be the size of those old Manipulator magazines from the Eighties that were, like, three-by-five feet,” Julia says. “Those were huge. It’s just going to be a bitch for people to ship. It’s going to be awful.”

From the way she talks about it, though, it’s clear that Julia is happy with her role as the Indiana Jones of industrial music, unearthing relics from Flesher’s collection to present to the world. But then again, she says, an embarrassment of riches can be taxing in other ways. “When we’re like, ‘Oh, my God, we still have these boxes to go through,’ we’re not so glad,” Julia says. “But it’s all discovery nonstop, and from that discovery there’s new ideas of projects or things to do to honor these guys.”