Ask Vanessa Kirby if, as a little girl living in London’s middle-class neighborhood of Wimbledon, she dreamed of punching people in the face. You might hear a giggle on the other end of the phone line. Inquire about the endless hours she must have spent during her formative years wishing she could throw a toaster at someone in the middle of a fight or choke someone out with her thighs — that inspires a heartier baritone chuckle from her. Suggest that Kirby must have grown up filled with a burning desire to drive a 360-degree rotating jeep out of a warehouse window. Now the 31-year-old actress makes a sort of pffft sound before laughing uproariously.

“I’m so not an action-movie type,” she says. “I’m a theater nerd from London! But you want a lot of different experiences as an actor. As many as possible.” A pause. “Which is how you find yourself hanging on the edge of a cliff and a helicopter is spinning around you and you’re thinking, ‘What the hell is going on?!’ ”

The helicopter scene comes near the end of Hobbs & Shaw, the Fast & Furious spin-off that Kirby stars in alongside Dwayne “The Rock” Johnson and Jason Statham. By the time we get to that visceral, climactic stunt, however, we’ve already watched her character Hattie Shaw — a rogue MI6 agent and the sister to Statham’s bad-guy-turned-good-guy Deckard Shaw — do every one of those aforementioned activities. We’ve also seen her hop and sprint across the tops of storage containers, slide across a concrete floor to take out two thugs at once, drive a truck sideways through a wall, display an affinity for heavy artillery, ride shotgun in roughly a half dozen high-speed car chases, and kick a chair into a guy’s midsection before slamming his head into a table. Kirby more than holds her own against her rough-and-tumble costars. “Dwayne and Jason have been doing stuff like this for years,” director David Leitch says. “Vanessa is new to all of this, and she immediately gave as good as she got.” Plus, like Ginger Rogers, she occasionally has to do what they do backwards and in heels.

For an actor whose breakthrough role was playing Princess Margaret in Netflix’s award-winning series The Crown — a part whose biggest physical requirement, she points out, was stubbing a cigarette into a sandwich — Kirby’s coronation as a bona fide running, jumping, ass-kicking action hero may be the best surprise of the summer movie season. Her brief but memorable turn in Mission: Impossible — Fallout proved that she could handle herself in a melee and was handy with a knife. But what she’s doing in this F&F franchise standout is some next-level, close-contact, roll-up-your-sleeves kind of work. It suggests that, in addition to playing rebellious royalty and femme fatales, Kirby may very well be the female Bond we deserve. 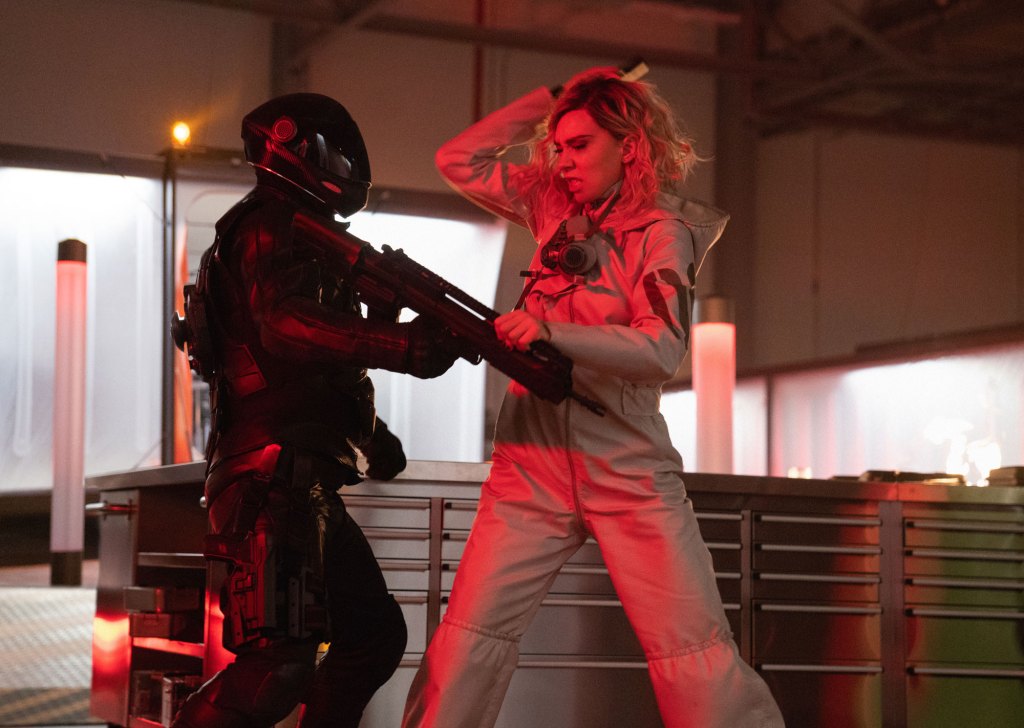 “Yeah, I don’t quite know how this happened, yet here we are,” she says. “When they came to me with this, I suddenly felt like: Ok, well, here’s this opportunity to introduce another strong, female character into this series. I mean, you have Michelle Rodriguez and these other wonderful actresses who’ve been a part of these films in the past. But this is a story where you have these two men, and a woman who’s an equal part of their team. She’s not being objectified. She’s not the weak link. She doesn’t need them to fight on her behalf. She doesn’t need to be saved.

“I knew it’d be hard, and I knew it’d be fun to do,” she continues. “But what drove me was the idea that somewhere out there, some 13-year-old girl would go to the movies, and while her brothers are freaking out over the Rock, she gets someone to relate to. That girl gets to see herself up there. She gets to have the same experience her brothers or her male friends have when they go to an action movie. It suddenly seemed like this was an important thing to do as well.”

Growing up in London, Kirby was more likely to be buried in a book than catching a blockbuster, claiming she “preferred Chekhov to action movies, really,” before groaning, “That sounds so pretentious. God, so sorry. What a wanker!” She was “not what you’d call sporty” and caught the theater bug early on, as an outlet and an escape; Kirby has talked about being severely bullied at school and suffering from giardiasis as a teen. After years of doing plays in the U.K., she nabbed the Crown role. One of the show’s fans, Tom Cruise, recruited her for M:I duty, and Kirby claims she wanted to make her character “kind of weird, a little strange…I liked the idea of subverting the usual stereotype of the femme fatale.” (The stare her mystery woman fixes on Cruise before planting a violent kiss on him is as intense as any of the action sequences not involving extreme skydiving.)

But it wasn’t until she found herself watching the star on set that she gleaned the appeal of a D.I.Y approach to action filmmaking. “Honestly, I didn’t understand the whole notion of doing stunts until I saw Tom do what he did. You have to be part athlete, part dancer. A fight sequence is like learning a ballet.” And Leitch, a former stuntman and fight co-ordinator who co-directed the first John Wick movie and Atomic Blonde, had a reputation for staging sequences which relied on his performers to be in the middle of things as much as possible. “If you can train the actor to stay in 90-percent of the action, it’s just that much more compelling for the audience,” he notes, citing Charlize Theron’s one-shot shootout in Blonde as a prime example. “So to observe Vanessa get to the point where judo-throwing guys on the ground looks like it’s no big thing…it was a blast to see her take to it.”

Getting to that point, however, required a lot of training: three days a week, three hours a day, for six weeks. “Lots of fighting, lots of parkour, lots of martial arts drills — which I was pretty crap at initially, if we’re being honest,” Kirby says. “Then once I started to get the basics down, we could add things, take things away, create combinations of moves. I was doing a play at the time [Julie, a riff on August Strindberg’s Miss Julie at the National Theatre], sometimes two shows a day — I’d get up at 7am, train for three hours, rehearse, do a performance at night. So, lots of soreness as well. But I ended up loving it. “

Then there were the more complicated stunts — the ones involving, say, Kirby being inside a car as it was rotated 360-degrees on a gimbal, with the actress strapped into her seat but still flying about every which way. Or one in which the actor was wired to the outside of car that Statham is driving and “drifting” at some impressive speeds. (“You need a willing participant to make these types of things work,” Leitch says. “But there were a few things where even we were going, ‘So Vanessa, you really want to do this?'”) Mention that last one to Kirby, and she replies, “Maybe it’s crazy to say this, but after a while on this shoot, these dangerous stunts…you kind of get immune to it. You know, ‘Strap myself to a moving car?'” She adopts a singsong voice. “‘Just ano-ther daaaaay on the job!'” It eventually got to the point where I’d go, ‘Oh, today I just have to repeatedly punch someone? Easy!'”

And while neither of Kirby’s next few projects — an untitled low-budget collaboration with Gimme the Loot director Adam Leon; The World to Come, a character study about two women in love set in the 1800s — will require her to flip a man by the neck using only her coat, she is now ready, willing and able to employ her new skill set on demand. “It’s funny, I was thinking about Princess Margaret,” she says, referencing her Crown character. “I look back on her now, and think, well, half of the time, all she really wanted to do was fight! And she never could. With Hattie, I finally got to do that. So in that way, the role was cathartic.” Kirby drops her voice to a conspiratorial whisper. “I’m in a movie where I get to fight the Rock. And I get to win.“