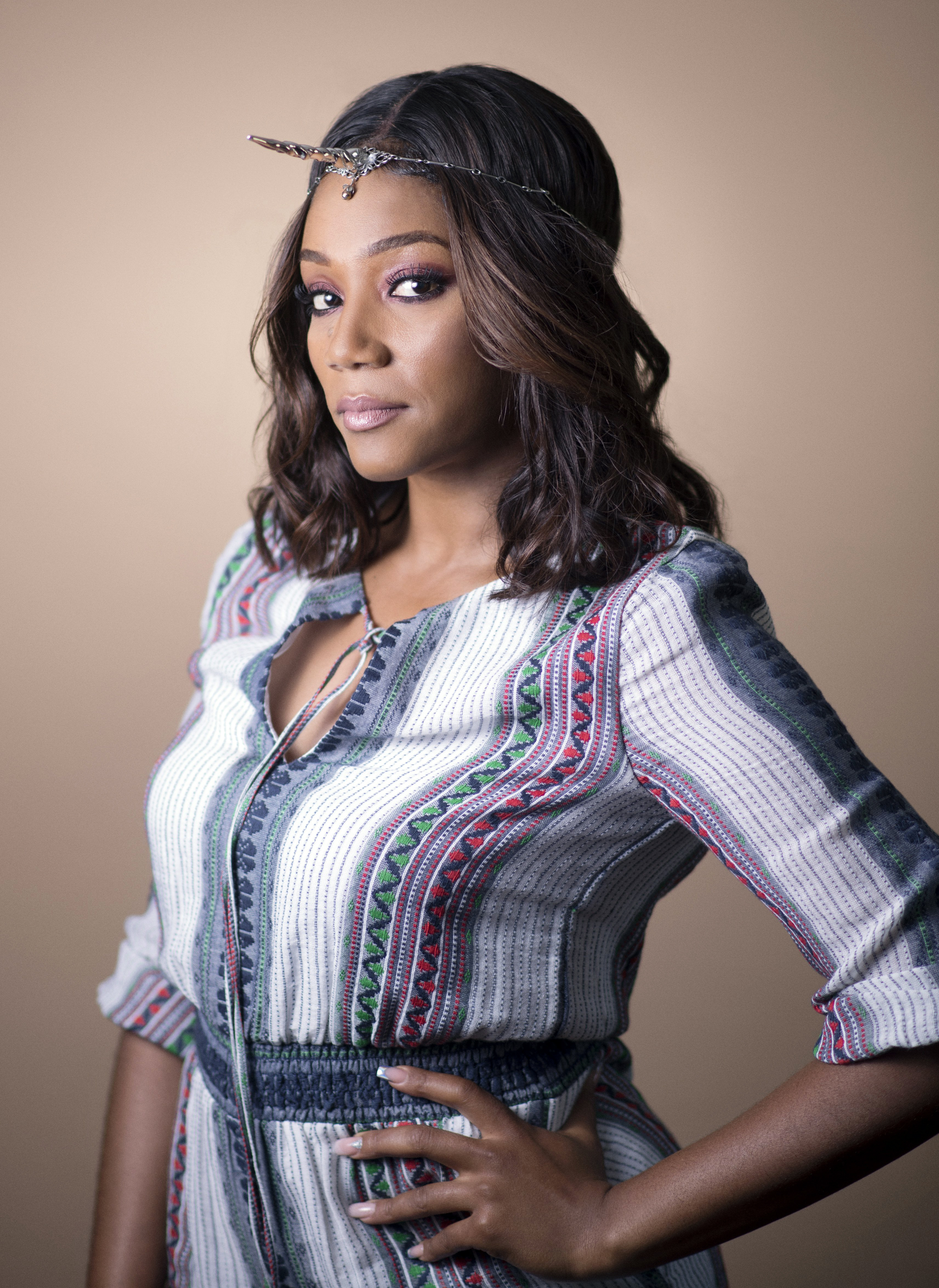 “I’m not pregnant by Leonardo DiCaprio yet, but who knows what could happen?” Tiffany Haddish asks in a way that makes it hard to tell if she’s joking. And, truth be told, she probably isn’t. Thus far, the 38-year-old comedian has manifested most of the other items on a wish list she made back when she was in her mid-20s, living out of her car (“but in Beverly Hills!”) and trying to make it in the stand-up comedy circuit after a bout of depression led her to quit her job as a customer service agent for Alaska Airlines and do some serious soul-searching. “My therapist was like, ‘What brings joy to your heart?’ And I was like, ‘I like to see teeth. I guess maybe I should have been a dentist.'”

In fact, comedy had always been a coping mechanism for Haddish, who grew up in South Central Los Angeles and whose childhood went from “pretty normal” to decidedly not so after her mother, who had worked for the post office, suffered brain damage in a car accident. “When she came home, it was like a different person came into the house,” Haddish explains. “It was like this kid inside of this grownup body.” Haddish, then nine, was suddenly charged with taking care of her mom and her three younger siblings, a situation untenable enough that all the kids eventually landed in foster care, where Haddish’s foster grandpa once walked in on her stuffing toilet paper in her training bra and “was like, ‘Well, if you let me suck on your titties every day, then they’ll grow and you’ll have some.’ So I let him do it. I didn’t even realize I was being molested. I thought he was helping me.”

Meanwhile, Haddish was finding that her “powers of comedy” were the best means by which to convince the kids at school to share their lunch or invite her over or do the homework she couldn’t do on her own because she still could barely read. “I learned from Roger Rabbit that if you make people laugh, they’ll do anything for you – which is almost true.” A high school crush (“who lost his virginity to a girl named Tiffany; I wanted to kill that bitch”) led her to her school’s drama department, where she typically got cast as “the maid or the monkey or something funny. By the time I got into high school, my social worker was like, ‘Look. You got two choices. You can go to Laugh Factory Comedy Camp or you can go to psychiatric therapy, because something is wrong with you, child.”

It was outside the Laugh Factory, nearly a decade later, that Kevin Hart noticed that Haddish was living out of her car, gave her $300 to get a hotel room, and told her to write out her list of life goals – which aside from impregnation by DiCaprio, also included “find a place to live, work with Kevin Hart, work with Jada Pinkett Smith and spend time with Arsenio Hall.” All of which Haddish has since managed to accomplish as her career has steadily snowballed from bit parts on TV to breakout roles on The Carmichael Show, Keanu and this summer’s Girls Trip, for which Haddish auditioned for director Malcolm Lee over Skype (“I told him, ‘The only time I’ve ever Skyped was for Skype sex. If I start touching on myself, just check me. Just reel me in”) and in which her raunchy, riotous character stole the movie à la Bridesmaids‘ Melissa McCarthy (sample line about a dick pick: “I just wanna make that my wallpaper – and not on my phone”).

Since then, Haddish herself has gone viral after describing to Jimmy Kimmel how she took Will Smith and Jada on a Louisiana swamp tour with tickets purchased via Groupon. “I said, ‘Jada, what do you think a Groupon is?'” Haddish says of Pinkett Smith’s confusion about sharing the tour with the masses. “She said, ‘I thought it meant you had a boat that you could take a group of people on!'”

Now, she’s publishing a biography called The Last Black Unicorn, filming Night School with Hart, and regularly calling Queen Latifah, who she met in the first class cabin on the way to shoot Girls Trip and has since been known to drunk dial (“I’d be like, ‘Oh shit, I’m drunk!’ She kept me from making really bad choices”). As for wrapping up that list? “Brad Pitt hasn’t called me,” Haddish laughs. “But anything is possible.”