'The Shape of Water': Sally Hawkins on the Art of Romancing a Fish-Man - Rolling Stone
×
×

Sally Hawkins was writing a story about, of all things, a mermaid. That’s when the call came in.

New project. Guillermo del Toro. Vague premise. Might not happen. But he has you in mind.

The film that the 53-year-old Mexican director, best known for outrageous, ornate fantasies like 2006’s Pan’s Labyrinth, was working on was titled The Shape of Water. And oddly enough, like Hawkins’ tale, this project also  revolved around an underwater creature: a merman cryptically referred to as “the Asset,” who’s been captured by the U.S. military just as the Cold War with the Soviets begins to heat up. To say that the British actress and one-time Oscar nominee (Blue Jasmine) was experiencing a moment of supreme kismet would be putting it lightly.

From 'Shape of Water' to Silver Surfer: How Doug Jones Created His Creatures

'The Shape of Water' Review: Guillermo del Toro's Girl-Meets-Monster Romance Is a Gem

“I just got goosebumps and nearly fell off the chair,” Hawkins recalls, when she first heard that the filmmaker had written a character specifically for her. “I said, ‘I don’t need to read a script, it’s Guillermo del Toro. Whatever it is, it sounds amazing.” For a long while, nothing happened. Then, after she unexpectedly found herself at the 2013 Golden Globes (“I was gate crashing – my friend brought me along,” Hawkins explains), the actress was getting ready to leave and suddenly bumped into a very inebriated del Toro. “It was very loud and I couldn’t quite hear him,” she says. “but he just picked me up and said, ‘The
fish! The fish! Will you be in my fish film?!?’ And I said, yes, of course – just
say when and how high I need to jump and I’m there!”

“She then said, ‘You’re not going to believe this,” del Toro recalls, picking up the thread. “But I am writing a story in which a woman turns into a fish.’ I asked, ‘Can you send it to me?’ I was surprised at how poignant and beautiful the material was. It seemed to be rephrasing something very deep in her. As a writer, you recognize when a piece of material hurts.” He would soon take that charming bit of synchronicity one step further: By the time the two had finished making The Shape of Water, which opens In New York and Los Angeles today and goes into wide release on December 8th, he had included two details from Hawkins’ original tale: the scars on the side of Eliza’s neck and the use of saltwater in a bathtub. It was the beginning of a beautiful friendship. 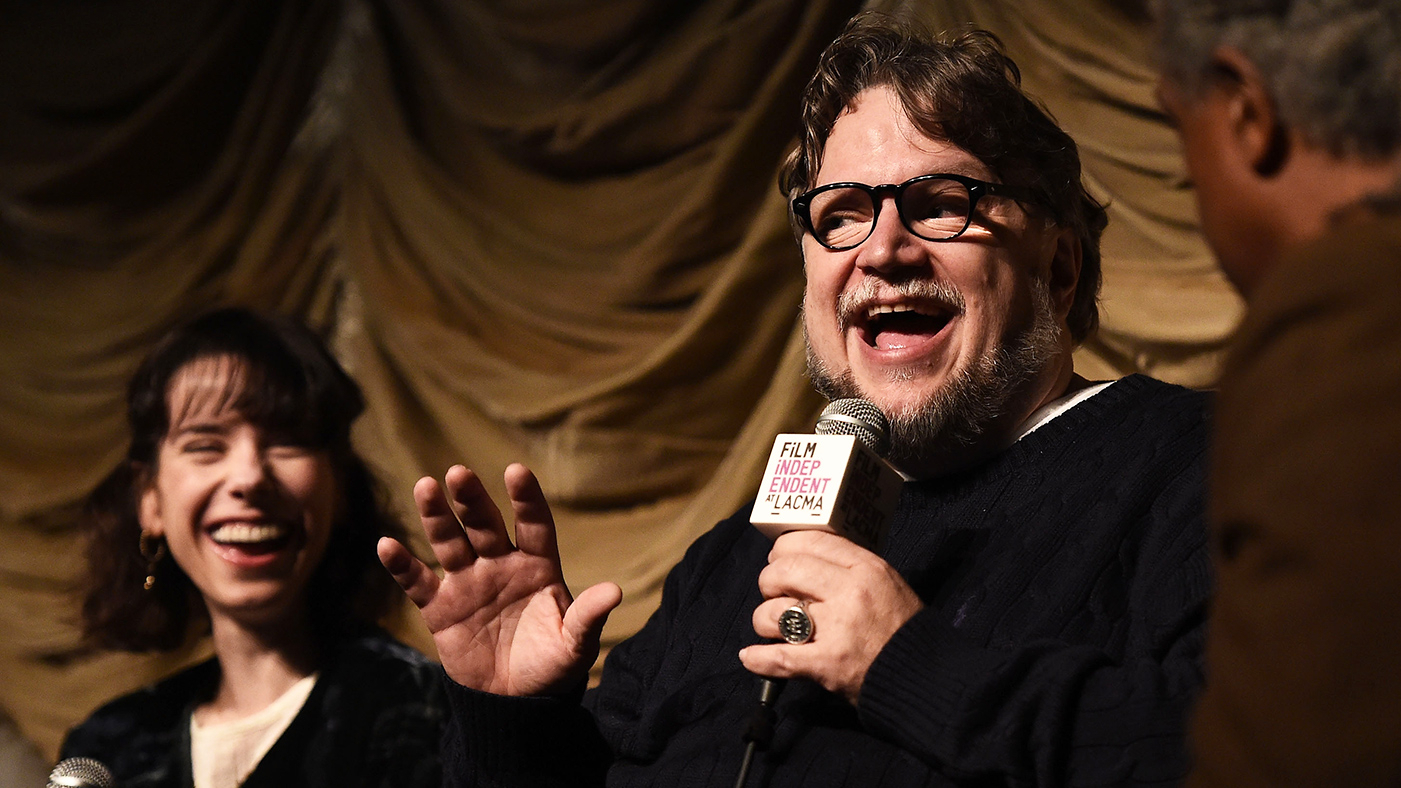 An inverted take on Beauty and the Beast blessed with the filmmaker’s social consciousness and signature magical allure, The Shape of Water follows a mute cleaning lady named Elisa Esposito (Hawkins) who works at a government facility in early 1960s Baltimore. Before she encounters the Asset (played by del Toro favorite Doug Jones), Hawkins’ heroine busies herself in routine: she wakes at the same time every day, boils eggs, takes a bath, masturbates, shines her shoes, pulls off a new page from the calendar, then heads to work. Other than her friends, Zelda (Octavia Spencer) and Giles (Richard Jenkins), Elisa’s inability to speak aloud is often brushed aside by strangers as a weakness. But the woman is fearless, living life in a perpetual state of curiosity despite her repetitive day-to-day. She’s one of the few people to offer this fish-man kindness and friendship. And like the Asset, with whom she soon develops a close romantic bond, she knows how what it’s like to be treated as nature’s mistake. “He does not know what I lack or how I am incomplete,” Elisa signs to Giles. “He sees me for what I am.”

With Shape, Elisa only communicates through sign language and body movement – the flick of an eyebrow, a shrug, a tender smile. To prep, Hawkins honed in on the role’s physicality, taking ASL lessons – “I would have given a year to it if I’d been allowed,” she admits – and learning how to dance. (The latter was for what’s arguably the movie’s most sublime sequence, an exquisite Fred Astaire and Ginger Rogers-esque pas de deux between Elisa and the creature.) More importantly, she says, was that she kept returning to del Toro’s central idea behind writing the movie in the first place: how the power of love can render one speechless. “We’re animals: we pick up sound, we pick up energy from someone,” she says. “And love is beyond words. So much is body language and eye
movements, gestures, the feelings somebody gives you or you get from somebody
else. Any words fail to express the true nature of love, and that’s why [Guillermo Del Toro’s story is] so brilliant. I actually adored the challenge of it.”

Depicting the doe-eyed look of love on screen is a skill that Hawkins has been asked to call on a lot during her two-decade career, from falling head over heels with a woman in the 2005 Victorian-era TV miniseries Fingersmith to her relationship with a brash and boisterous mechanic in Woody Allen’s 2014 melodrama Blue Jasmine. But her real speciality is bringing a sense of humanity and empathy to misfits, kooks and social pariahs – she has an affinity for outsiders living on their own terms. It’s there in her breakout role in Happy-Go-Lucky, Mike Leigh’s 2008 character study about an insanely optimistic young woman who wins over a number of depressed, dour Brits through the sheer force of her sunny disposition. And it’s there in both The Shape of Water and her other 2017 standout role: the painter Maud Lewis in the sleeper-hit Maudie, a biopic which follows the Nova Scotia-based folk artist (who suffered from rheumatoid arthritis) as she works on her canvases with gnarled hands and a large heart.

“One of the most magical and genuine ways of acting is when you see a person that carries reservoirs of emotion,” says del Toro. “Pain, happiness, anger – [it’s] in their bodies, almost like emotional camels, and they only release them in front of the camera. And this is Sally. I think she’s truly and completely alive and in the moment when she acts.”

“I’m so emotional about it because it meant so much,” adds Hawkins. “It’s
Guillermo’s heart on film. For me – and I think he said the same thing – he’s
both Eliza and the fishman.” And their collaboration has paid off: Shape took home the Golden Lion award at the Venice Film Festival when it premiered there this past September, and has been repeatedly mentioned as a shoe-in for Best Picture and Best Actress nods at the Oscars. After spending months shooting a movie where she doesn’t utter a word, Hawkins now can’t stop talking about the film, effusive in Del Toro’s vision – and how lucky she was to be apart of his project.

“Guillermo was really interested in tapping into that innocence [and] the silent movie era that I was fascinated in as a child,” says Hawkins. “Because there was nothing else on television that was made for kids at that time. Sunday matinees with my mom. It was a big part of my life, while she did the ironing, and … .” She stops, takes a breath and then chuckles. “Oh my god, I am talking too much, aren’t I?” You can almost picture her smiling, nodding her head like Eliza and beaming right through the phone line. “There’s so much power in silence. But it’s just such a pleasure talking about it right now.”