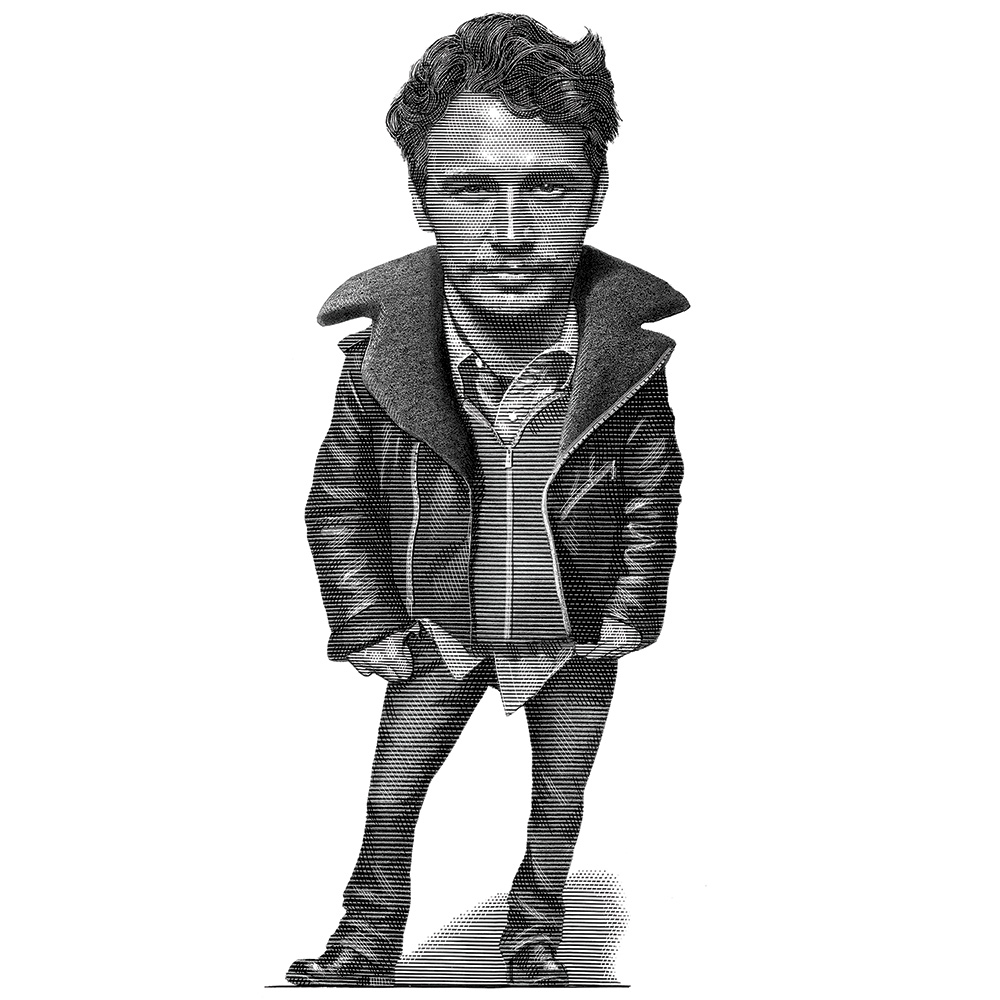 This week, James Franco gives arguably the greatest – and inarguably one of the most bizarre – performances of his career in The Disaster Artist, a bonkers account on the making of the worst movie ever made. The 39-year-old actor, who also directed the film, plays Tommy Wiseau the mysterious figure behind The Room, an incomprehensible fever-dream of a drama that’s become a midnight-movie staple and a cult classic since its release in 2003. (Franco says he stayed in character for the entire performance, speaking in Wiseau’s unplaceable accent to the cast and crew for the entire shoot.)

The film caps a typically big year for the always busy star. He’s just finished starring in David Simon’s latest opus The Deuce, a mean and gritty drama about Times Square and the birth of the porn industry in the 1970s; he’s got several projects in various stages of production; and he’s beginning to hit the awards-season circuit to capitalize on The Disaster Artist‘s Oscar buzz. Franco was cheerful when he got on the phone with to discuss the pitfalls of fame, teenage brushes with the law and quitting social media. “I have lived past that age of James Dean age,” he says. “I’m not looking at Dean as a hero anymore. I am looking to people like Brian Cranston and Meryl Streep, who’ve been able to maintain a career and have gratitude and humility and are still amazing at what they do.”

'The Disaster Artist' Review: James Franco Takes on Worst Movie Ever – and Wins

What’s the best advice you’ve ever received?
Get out of your own way. Ego is a killer.

What does religion or spirituality mean to you?
Spirituality is crucial. It is a very simple thing: You have to give the world back to the world. It is the law that I abide by. You get out of life what you put in. You put flop in, you get flop out. You put in love, you get out love.

It’s the ego, dude! Ego is the problem of the world, and having success in my business multiplies that by a fucking million. It’s like you have a 100-foot mirror around you at all times. You don’t have a chance.

What do you like to do to relax?
I listen to this podcast You Must Remember This. I love it. It’s all about the first 100 years of film history. It touches on most of my heroes in the industry. But almost every story is filled with wreckage: people trying to be successful,  people who were successful and then lost  it, people trying to hold on to careers or  love and marriage.

What’s your basic approach to life?
I believe in hard work. I believe suffering isn’t a necessary ingredient of good work; people don’t need to use their art to work out their demons. I loved Bryan Cranston’s book A Life in Parts – somehow that dude figured it all out. He has a line in there, something like, ”I want my life to be stable so that I can be crazy in my art.” I subscribe  to that.

When you were a teenager, you had some brushes with the law – underage drinking, graffiti, shoplifting. What did that teach you?
I just listened to Marc Maron’s interview with Barack Obama [on the podcast WTF], and Obama  said that when he was younger he sort of tried on different hats. Growing up, we learn how to fit in with the world. And when I was young, I just felt I didn’t fit. I had a rebellious stage, and then I realized that being tough wasn’t me.

I grew up in Palo Alto, six blocks from Steve Jobs. I thought, “Man, I am the most unlucky kid in Palo Alto, getting caught all the time. My friends are so much worse than I am – why am I a cop magnet?” I realize now that I was lucky. It was like the universe was saying, “Dude, stop. It’s time to wake up.”

“I was at breakfast with my grandmother when Obama came on and said [The Interview] should be played: ‘I love Seth Rogen, I love James Flacko.’
And I was like oh man, he got my name wrong!“

There was a point when you were getting degrees from Columbia, NYU, Warren Wilson and Brooklyn College while you were working in film. How hard was that?
Going to four graduate schools at once was an extension of that kind of searching for my way in the world. It was hard. I had dropped out of UCLA when I was 18. When I was 26 or 27, I went back and finished my bachelor’s in literature. And I found that I loved school. I was getting something out of it that I wasn’t getting from my acting career. It’s my nature that when I find something that feels good, I throw myself into it. Obviously, I reach for too much. By overdoing school I wasn’t living life – I was sort of hiding in school.

What’s the best lesson you’ve learned from acting?
I did this movie not many people saw called Annapolis. We went to the Naval Academy to meet with the shipmen and learn what it was like. I was told that they give the midshipmen more work than they can handle. They are overloaded with work. They are always under the gun, so that when they are out on the ocean or in a battle situation they’re equipped to make decisions under pressure. But I should have just gone to one grad school and just enjoyed the experience more.

So what do you do for fun?
I binged Stranger Things 2; I watched it all in one day. I started surfing. I play ukulele. I started playing with a ukulele group once a week, a bunch of actors and producers. It’s awesome. We play a lot of Dylan, Leonard Cohen and Cat Stevens.

When you did The Interview, you suddenly found yourself in the middle of an international controversy? How hard was that to go through?
It was weird – it all happened quickly. Obama talked about it. I remember I was back in my hometown around the holidays when the movie was supposed to come out. I was at breakfast with my grandmother when Obama came on and said the movie should be played: “I love Seth Rogen, I love James Flacko.” And I was like oh man, he got my name wrong!

You’re a hardworking person, but there’s also this stoner persona around you that doesn’t jibe with who you are.
I guess I am a good actor. I do have squinty eyes, and when I smile I look very high. I remember going to a party and Lady Gaga was there, and she almost fell down [because] she was so surprised that I didn’t smoke weed while we were making Pineapple Express. She just assumed that we were high all the time. Seth [Rogen] is self-admittedly high all the time, but I don’t smoke at all. I’m sure you don’t believe me.

I saw Hello Dolly recently and you were in the audience. Are you secretly into musical theater?
You’ve got to put that in the fucking article: “I saw him at Hello Dolly.” Bette Midler has some thick shtick. That is the definition of shtick, but she does it better than anyone. I’m more of a contemporary musical guy but I was blown away by it.

I love Broadway, I go see almost everything. I loved Hamilton; I saw that three times. I loved Dear Evan Hansen. My friend went to see Hello Dolly and he said that the guy behind him had a gay meltdown. When Bette arrived, he was just like in shock and they actually had to escort him out. I guess that play is really important for some people.

Between The Disaster Artist and The Deuce, there’s a been lot of Franco nudity on screen lately. Are you comfortable with being naked on set?
Yeah, I am pretty comfortable. I knew that the scene in The Disaster Artist was going to be a key scene. It’s one of my favorite scenes in the movie – so crazy, its funny, but it’s also a real low point for the character. And I knew that the nudity was really crucial to the insanity of the moment. So I was on a diet for like a year of Whole Foods salad for lunch and dinner. I was feeling pretty good about showing off my butt [by then].

In The Disaster Artist, Tommy Wiseau has a very particular body type. It’s like, I don’t even know how he got it. I have seen people ask him in person like “Tommy, how do you get your muscles?” And he is like, “Ha ha ha, I do 1,000 push-ups every day. Next.” I don’t believe it. I heard [costar] Jason Mantzoukas describe it on his podcast with Paul Scheer, How Did This Get Made: “It looks like his skin has been freeze-dried to his body.” It’s so odd.

Why did you quit social media?
I got pulled into that weird, dark hole. Social media sucks you in – like, “Whoo, I got a lot of likes, I gotta get more of those.” Nobody was giving me likes when I went to MoMA and saw this great exhibit. You get likes for exhibitionist stuff. I got pulled into that. You think, “This isn’t me, this is just a funny mask I wear sometimes.” And then the mask is cemented to your face, and that is how people identify you.