Kelly Marie Tran grew up dreaming of Hogwarts, not Dagobah. In fact, when she got the script for Star Wars: The Last Jedi back in 2015, she had never seen a Star Wars movie – not even The Force Awakens, which hadn’t yet come out. She still landed the most prominent new role in the latest entry to the galaxy-far-far-away franchise, playing maintenance-worked-turned-Resistance-hero Rose Tico. Along the way, she caught up on the saga. “I like A New Hope the best,” she says, referring to the original 1977 movie. A San Diego native whose parents immigrated from Vietnam, Tran saw herself mainly as a comedy performer before landing the Last Jedi part (you can spot her in a bunch of College Humor videos). Now, she’s trying to convince herself that no one will recognize her on the street, even after the movie’s December 15th release. “I feel totally Hannah Montana,” she says, in an interview conducted in late October for Rolling Stone’s The Last Jedi cover story. “Like I have that life and I also have a normal life.”

14 Things We Learned About 'Star Wars: The Last Jedi'

What’s it like for you as the release of this movie looms?
Well, it feels like I’ve been a part of it for so long now. I’ve had a lot of time to think on it – I’ve spent most of the year being very afraid. And I finally got to the point where I’m just, like, ready to face whatever it is, and I’m excited for it to come out. I’m excited to see it. I don’t really know much, so I feel excited and scared, but in a good way.

How did they present this character to you when you were auditioning?
They didn’t, really. The character description was so vague, it was like, “Any ethnicity, female.” Then the sides that they sent were fake, but I think it was one of those things where they knew what they were looking for. I just tried to be honest with what I saw on the page, if that makes any sense. There was no one saying, “She’s supposed to be like this, this and this.”

“One day we were shooting this scene and I remember John [Boyega] stopping and saying, “Kelly, we’re making history right now” … and we were.”

Did your lack of Star Wars background affect the way you shaped the character at all?
I was really lucky that I hadn’t been influenced by all of the allure of this world – and I kind of wanted to keep it that way. I wanted Rose to stand alone, even though she is affected by the things that have happened in Force Awakens. When she first meets Finn, he’s now a hero in the Resistance and that’s a huge deal to her. But when you first meet her she hasn’t met any of those characters – she’s just heard about them.

You had this unique experience of reading the Last Jedi screenplay before you knew much about The Force Awakens. Does it now seem inevitable that this is how the story went, given that weird reverse order?
Hard question. I feel like what’s cool is it feels really unexpected to me. I feel like The Last Jedi is a lot of things that people aren’t going to expect, which I think is a good thing. So if your question is after seeing Force Awakens I thought, “Oh, this would happen,” I didn’t. It was definitely something where I was like, “Oh I get it, but I’m also like, ‘Whoa, it’s going to be different in a great way.'”

You didn’t know how surprising it was until you saw its predecessor.
Exactly, because I didn’t know the relationship exactly between some of the characters until after I saw it, which was after I read the next installment. 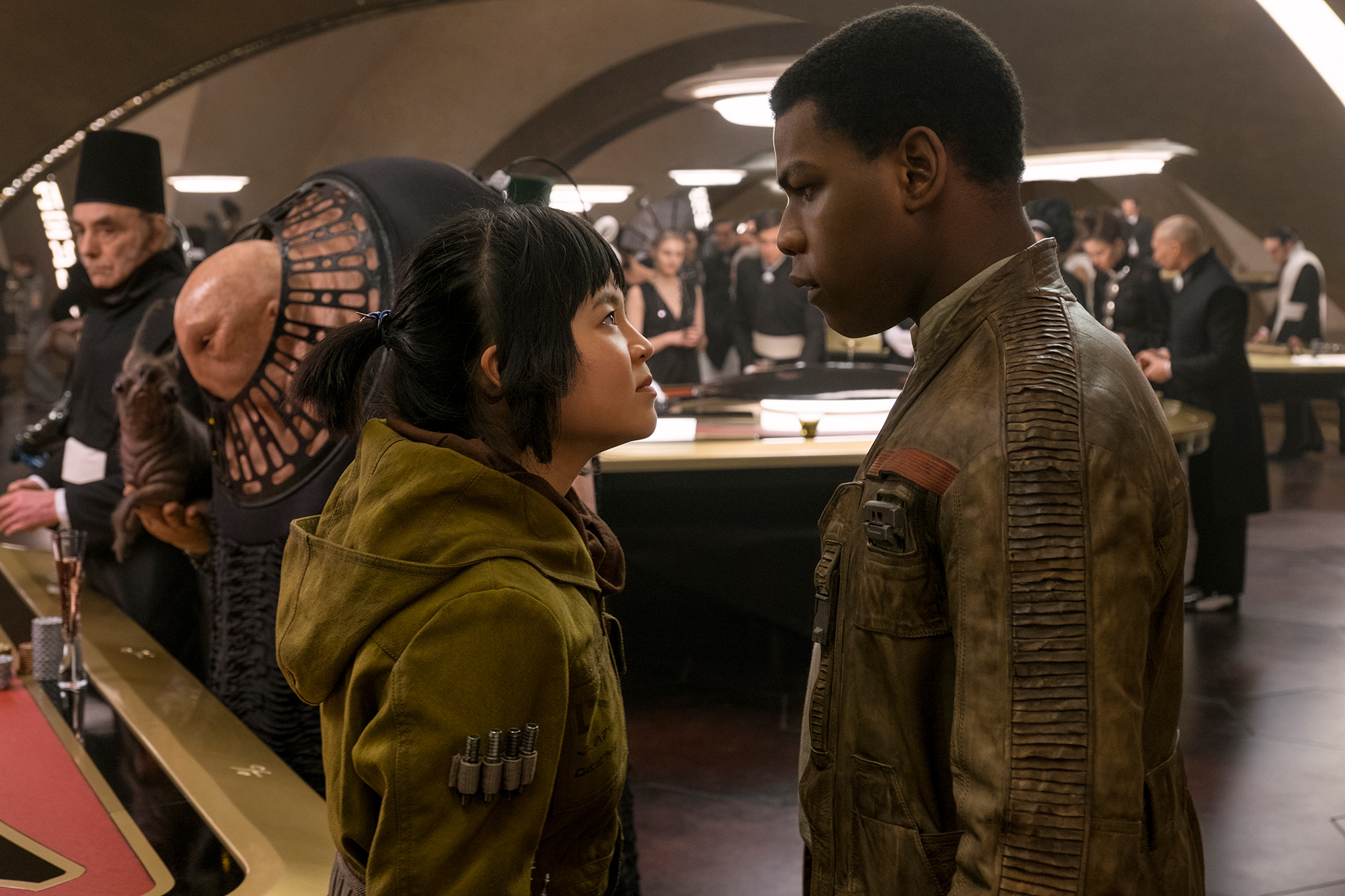 You got to hang out with Carrie Fisher a bit. Did she have any advice for you?
She told me that this was an amazing experience and to enjoy everything because it’s fleeting and it’ll go away. But if there’s anything else that you want to do – if you want to write, want to produce, whatever – start now because there’s going to be a time when you aren’t looked at the same way. She is really someone I got a lot of comfort from – just her presence. Because I didn’t know what this was [going to be] like. This was my first movie, and I remember being scared and not wanting to lose this job.

And do you want to create your own stuff?
I eventually want to write and direct and produce my own stuff. That’s a long journey that I’m starting because of that advice from Carrie. I’m one of those people where if I get a piece of advice from someone I look up to and respect, I’ll really listen to it.

You’re the first Asian-American woman to star in a Star Wars movie. What does that mean to you?
I wish it was just a nice little bonus, because it kind of feels like a lot of pressure in ways, I would love to live in a world where no one person has to represent a very large group of people just purely because of the fact that there’s not many of those types of people in movies or TV – or writing or producing or directing. I would like to live in a world where there are a bunch of different types of people doing those things. But obviously we don’t, and it’s something I think about a lot. I don’t take it lightly at all. I think from the moment I got this part – and it was also because this is a Star Wars movie – I just wanted to do the whole thing justice.

And on a representation standpoint, I wanted to do that justice too. Me and John talked about that: Just the idea that we are people of color, that’s something we always address in interviews. We actually had this one moment on set that I still hold really close to my heart. This one day we were shooting this scene and I remember John stopping and saying, “Kelly, we’re making history right now” … and we were. Because not only are we making a Star Wars movie, we have scenes where it’s just John and myself.