'The Climb': The Story Behind the Indie Buddy Comedy of the Year - Rolling Stone
×
×

When it comes to The Climb, filmmakers/real-life movie bros Michael Angelo Covino and Kyle Marvin have learned to expect any and all reactions. For one, Covino received what he calls a “lovely email” from Tom Hanks after he saw the award-winning indie dramedy (he has a small role in Hanks’ upcoming movie News of the World). And then, after the film played Sundance this past January, a fellow indie director told him that the story of two long-suffering pals had inspired him to reach out to one of his old friends. “I said, ‘That’s so sweet,’” Covino recalls over a recent Zoom call. “And he said, ‘Yeah, I need to tell him to go fuck himself!’ I thought, ‘Okay, that’s a take-away.’”

Zoe Lister-Jones on Conjuring Up 'The Craft' Sequel

There are complicated buddy movies, and then there’s The Climb. Taking place over the course of roughly 15 years, the film tells the often squirm-inducing saga of two old friends who share a love of biking (hence the title), and the various ways that eternal screwup Mike (Covino) continually upends the life of his chum Kyle (Marvin). Its time-spanning vignettes also take in broken marriages, drunken brawls, heated arguments, and the near collapse of that friendship several times. So it’s not remotely hard to understand the disparate responses to the film, which was written by the duo and directed by Covino — it’s less a feel-good comedy and more feel-intermittently-very-bad comedy.

“We understand those relationships that aren’t the best thing for you,” says Covino. “But there is that other ingredient that factors in — your connection to that person that operates on a deeper level, often due to the shared experiences you’ve had with them from a young age. Letting go of people we had a deep connection with is really hard, because we’re letting go of our past and the only person who shares those memories with us. Kyle is willing to hold on to Mike even though he shouldn’t, not only out of loyalty but also because of a sense of wanting to hold on to himself.”

The co-writers/costars’ own friendship dates back about a dozen years. Marvin, who grew up in Oregon and began working in the ad world, met Covino in 2010 when they acted together in a commercial. Eager to get into that business himself, the latter pitched an idea to the agency where the former worked for an Old Spice ad — it involved Steven Seagal and a bunch of chocolate-stealing monkeys. (“That’s when zany and absurd was the thing,” he says.) The idea didn’t fly, but the men bonded over a similar sense of humor.

One of the more surreal moments of their early collaboration arrived that same year when they produced a spot for the Montgomery Biscuits, the minor-league Alabama baseball team. After Covino had donned the uniform of the team’s star player, he had to repeatedly tell autograph-seeking fans he wasn’t the actual guy. “It broke their hearts,” he says, “so the next few kids who came up to me, I just signed like I was him.” Along with another friend, the two eventually started their own commercial production company in 2012. 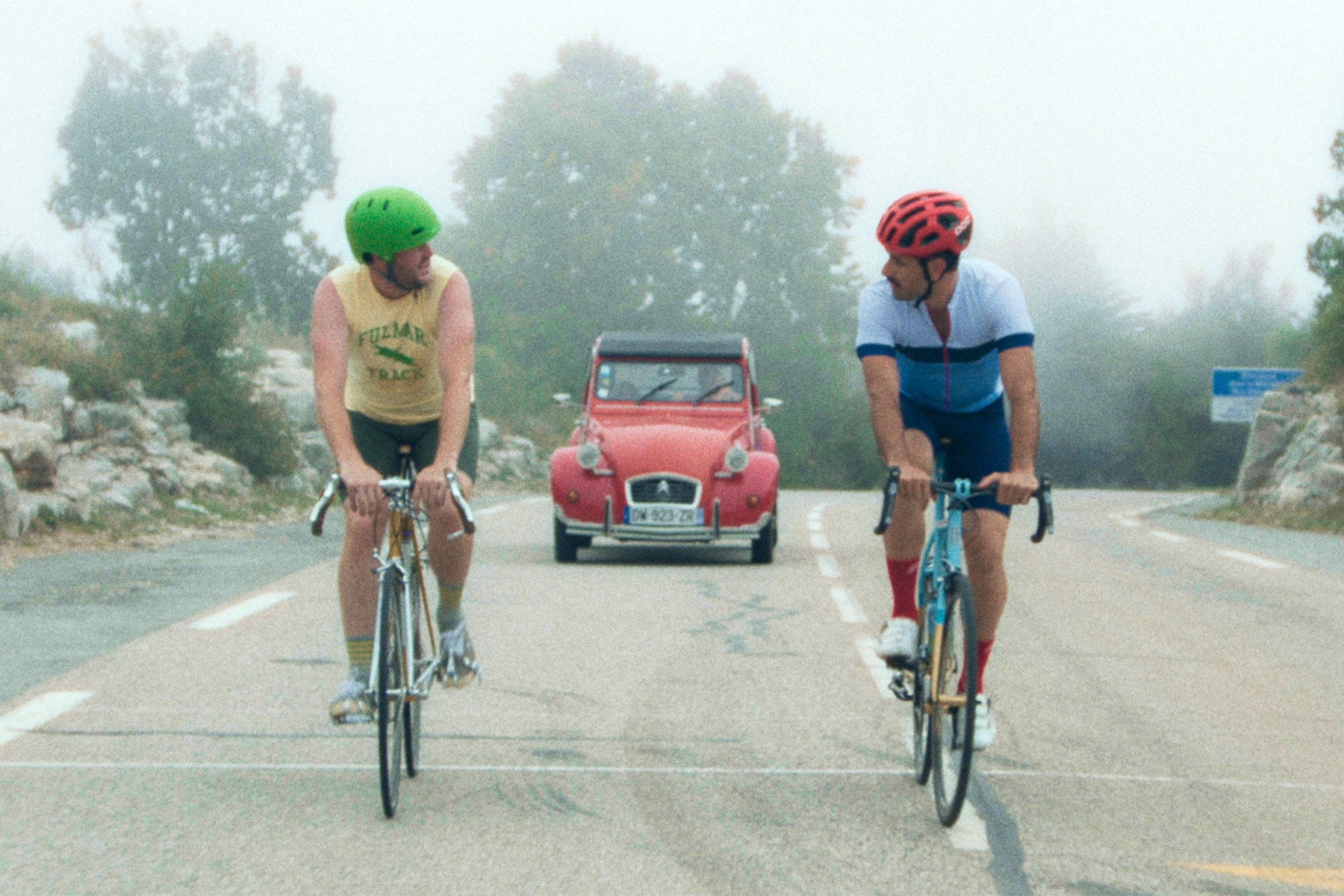 During a bike ride, Covino conceived the idea of a film about two friends whose bond is tested when one of them admits to sleeping with the other’s girlfriend. From Jules and Jim to Carnal Knowledge, movies about male buds and the women who come between them are a niche genre. But given that Covino and Marvin are friends now in their mid-thirties, and who play characters with their same names, how much was their film based on any real-life scenario? “I slept with Kyle’s wife,” deadpans Covino, relaying one of the movie’s pivotal plot points. “Once. I’m going to come right out and say it. It happened last week. At a festival.”

Turning somewhat more serious, Covino continues, “We definitely tapped into our own experiences less than our personal relationship, although some of that is there. I had to tell someone close to me not to marry someone. It wasn’t Kyle’s wife.” He smiles fake-lasciviously. ” I love Kyle’s wife.”

The Climb began as an eight-minute short the two men filmed in 2017, centered around a grueling uphill bike ride in which Mike reveals his transgression to Kyle. The following year it was shown at Sundance, where it was received warmly. A few months later, Covino and Marvin struck a deal with Topic Studios to expand it into a full-length feature, with an eventual $3 million budget. “On paper, it’s a really absurd pitch: two guys who have never acted before and a first-time director and a crazy shooting approach with a lot of single takes,” says Marvin. “There were a lot of risks they took, and thank goodness they did.”

Although the cast consists largely of unknowns, one recognizable face stands out — former Cheers regular George Wendt, who plays Kyle’s dad. “They sent me the script and I thought it was hilarious,” says Wendt. “It’s this horrible and wonderful relationship full of need and toxicity. I just really responded to it. I think we all do when it comes to having a friend like that.”

Marvin says they were discussing who would be “the coolest person ever to play my dad, and George came up, and surprisingly he said yes.” Adds Covino, “We love the idea of making his dad a familiar, comfortable character who everyone has lived with, in a way. We needed someone who was affable and welcoming, which is George’s persona even before this movie.” (Covino says Wendt did tell them he can’t go into bars anymore thanks to those Cheers associations.)

As planned, most of the scenes in The Climb were filmed in single takes after days of rehearsals, a process all new to Wendt. “I’ve never done a feature like this where you basically film each of the little segments entirely in one shot,” he says. “It was very theater-like.” Has he worked in any remotely similar situation during his career? “Oh, God, no,” he says. “You’d do the entire 10-minute scenes. But it was incredible.” 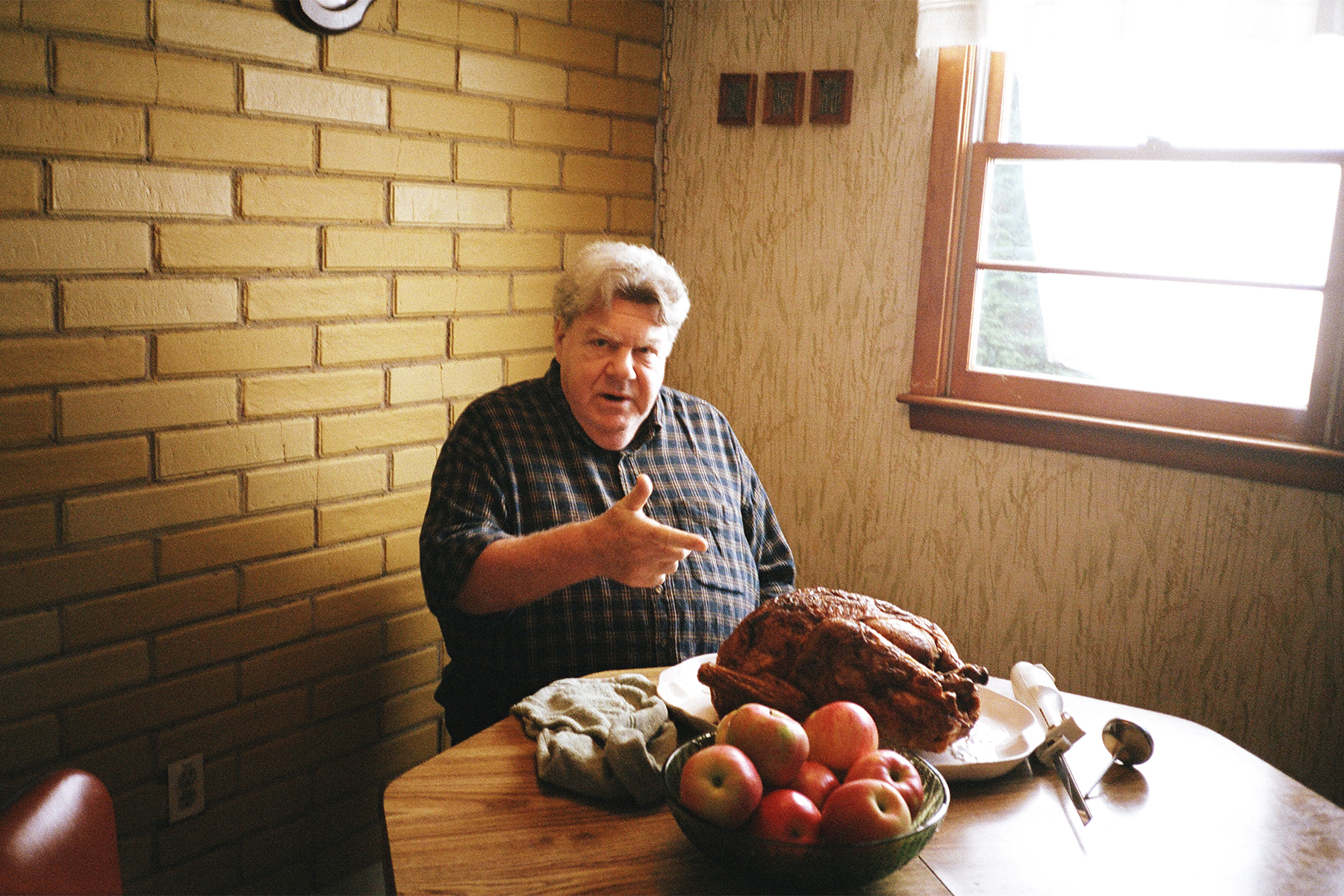 Wendt, in a scene from ‘The Climb.’

After winning the Un Certain Regard Heart Prize at last year’s Cannes Festival, The Climb was set for a theatrical run this spring; Marvin recalls doing TV interviews that would be followed by updates on the emerging pandemic. As with many other films, the release date was subsequently pushed back; it will now arrive in select theaters around the country on Friday.

During those months, Covino himself contracted the coronavirus, which he thinks he received from a family member. “I had mostly loss of smell and severe body aching,” he says. “But for me it was relatively mild compared to other people.” Still working by phone and Zoom, the men did manage to finish writing their next film: an ensemble piece set in the world of youth football that explores the tension between ambitious parents and “children realizing their parents weren’t the role models they thought they were,” says Covino.

Meanwhile, Marvin has written The Quench, a “coming-of-age thriller” in the midst of being cast, and which his friend will produce. (Covino has functioned in this role before, serving as a producer for the 2015 indie doc The Rat Slayer of Hillside, NJ, about a real-life war veteran accused of animal cruelty after killing a rodent in his backyard.)

But in an unexpected way, the delay in releasing The Climb could benefit the film. A movie about old friends who stick with each through trying circumstances could resonate in an  era in which many have been reconnecting with people from their past. “It’s a good point,” says Covino, “and as soon as you said it, thoughts went through my mind about the last eight months. When you’re on pause and staying at home, those are bound to be moments to reflect who and what is important in your life. I’ve done some of that. In the film, you watch Mike and Kyle overcome obstacles. It’s acknowledging that we have these tight bonds with people who sometimes we didn’t choose.”

Then there’s the riding aspect. More people than ever are grabbing two-wheelers over public transportation, and both Covino and Marvin have fielded calls and texts from friends asking for bike-buying advice. “Let’s be clear — we’re not professional cyclists,” says Covino. (Marvin, who hadn’t biked regularly since he was a kid, found the filming of the original short particularly grueling.) “Cycling is booming, so maybe there’s an audience for us? I don’t know.”

With the bike demand have come a wave of thefts, especially in Manhattan, where Covino has an office. Unfortunately, one casualty was the vintage blue bike that Covino rides in the closing scene in The Climb, which was locked up on the street. “It was right in front of our office for 20 minutes and the thieves are so fast right now,” says Marvin. “They’re just stealing like crazy. If anyone sees a blue Saronni, we’ll buy it back from you. Even it’s just the parts.”