Up until a few years ago, Sofia Coppola swore she would never do a remake. Then her production designer, Anne Ross, brought Don Siegel’s 1971 pulp classic The Beguiled to her attention – and the director saw a film ripe for retelling. A group of Southern belles are holed up at an all-girls school during the Civil War; suddenly, the young women and their headmistress have their isolated existence disrupted by a wounded Union soldier. Nearly half a century ago, Clint Eastwood’s Corporal John McBurney behaved as if he had arrived at a brothel, indulging promiscuous fantasies about ménage-a-trois. Meanwhile, the competition for his ardor drove most of the women to madness and, eventually, violence. Not surprisingly, Coppola saw the source material – a 1966 book by Thomas Cullinan – playing out a little less hysterically.

“That was a macho guy’s point of view,” she says, via phone, in early June. “I kind of love it for what it is, but the women are crazy, and you can’t relate to those characters. My main thing was to imagine what it was like for these women who were raised to be ladies, but then have to survive during this really brutal time.”

Coppola circled the wagons, bringing together a formidable squad – Nicole Kidman, Elle Fanning and longtime muse Kirsten Dunst – to square off against McBurney, played by Colin Farrell. “Before she even wrote the script, she talked to me about it,” says Dunst, who starred in two of Coppola’s previous five films, The Virgin Suicides and Marie Antoinette. “There aren’t that many great, beautiful movies about women. You’ve got Robert De Niro driving around in a taxi, thinking, but you don’t see women think so much on film. It’s a different kind of story.”

Both films open in 1864 in Virginia (technically, Louisiana) with the same gorgeous shot of moss-draped oaks. Sherman is closing in on Atlanta, and even as cannon smoke drifts closer to neglected plantations, the bloodshed – and any consideration of slavery – remains miles away. At Miss Martha Farnsworth’s Seminary, the eponymous headmistress (Kidman, in a role originated by Geraldine Page) still aims to instruct the girls in ways that, she says, will lead to “a calm and happy life,” and Miss Edwina (Dunst) obediently persists with lessons on French declensions and proper sewing techniques.

“There aren’t that many great, beautiful movies about women. You’ve got
Robert De Niro driving around in a taxi, thinking, but you don’t see
women think so much on film. It’s a different kind of story.”
–Kirsten Dunst

Into this Southern-gothic idyll stumbles Farrell’s soldier, an Irish mercenary. Coppola’s agenda is subtle from the start: In her telling, McBurney doesn’t assume virility alone will secure his refuge from the Confederate cavalry. He is cunning, even obsequious. “I’m grateful to be your prisoner,” he says, as the ladies turn their music room into an ad hoc infirmary. But soon, like a physician feeling around for that troubling tender spot, he begins the deliberate business of seduction. Miss Martha swats away his compliments. Lonely Edwina, however, is an easy target, and the uncharacteristically muted Dunst lends her an air of sadness and insecurity that McBurney eagerly exploits.

“Somebody pointed out that they never saw my dimples in this movie,” says Dunst. “I guess Edwina was so demure and soft-spoken, I never smiled wide enough.”

“In the original film, you know he’s a bad guy,” explains Coppola. “There’s flashbacks and voiceover. In this version, I wanted you to see it through the women’s point of view. You don’t really know if you should trust him.” She laughs. “One of my friends saw an early cut, and when he’s seducing Kirsten, she said, ‘I’ve dated that guy!'”

The routine that McBurney interrupts is a stifling one. To prepare, Coppola had the female cast cook and eat meals together. A Civil War reenactor demonstrated how to dress wounds, and a priest explained the many prayers that Kidman reads from the Book of Matthew. Coppola also distributed an antebellum etiquette book. “I think it was titled How to Be a Good Southern Lady,” says Fanning, who plays Alicia, the eldest of the schoolgirls. “A lot of it had to do with how to cater to a man. When he comes home, the whole house changes.” 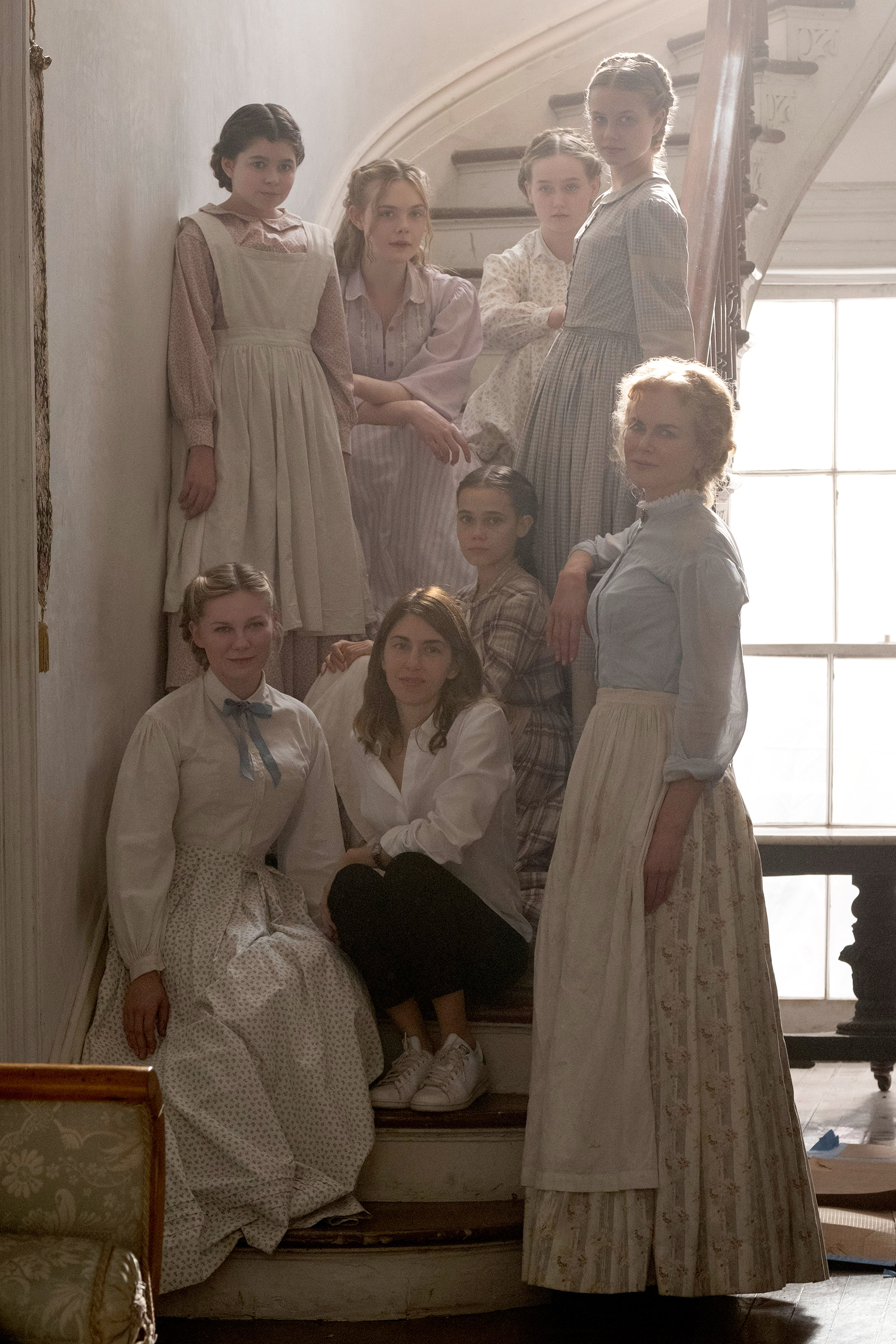 Raised for subservience, the women are practically free agents by the time they’re confronted with an outsider – a circumstance Coppola was keen to explore. “All they’re taught is how to be attractive to men and be modest, and now they have to find their roles,” she says. The filmmaker has long been drawn to thoroughly feminine spaces: With a résumé that includes The Bling Ring and Lost in Translation, she’s become something of the patron saint of young, white womanhood. In fact, The Beguiled shares DNA with Coppola’s 1999 debut, The Virgin Suicides, an adaptation of Jeffrey Eugenides’ book about five Michigan sisters confined to their house by strict parents. Both films even feature a dinner scene in which a male presence sends the sexually repressed room into giggly reverie. “I never thought I would revisit that aesthetic but [this film] appealed to me because it felt like a continuation of that,” says Coppola. “I got an email recently from Jeff that said, ‘I heard you’re doing The Beguiled, I always loved that movie.’ It must have had some influence on him when he wrote the book.”

McBurney succeeds in soliciting everyone’s affection – the subtext around a discussion of who will take credit for the delicious apple pie that he enjoys during dinner is as loaded as the whipped cream piled on top of it. But Coppola makes sure the audience is privy to female desire in its many forms. A resolute Miss Martha chalks her feelings up to Christian duty and compassion, while prepubescent Amy (Oona Laurence) imagines her much older crush is a “student of nature” from whom she can learn. “It’s a delicate balance,” says Dunst, noting that Eastwood’s “McB” kissed a little girl just minutes into the film: “The original movie had a lecherous feeling about it.”

“I didn’t want to be disrespectful by brushing lightly over such an
important subject [as slavery]. I’m a Yankee, but I tried to tell
the story through the women’s eyes, and not as political.”
–Sofia Coppola

Only Fanning’s Alicia, whose teenage hormones seem at odds with the genteel environs from the outset, proceeds from pure id. “Sofia said she was so excited to make me the ‘bad girl,'” recalls Fanning, who got her big break at age 11 on Coppola’s Chateau Marmont-set film Somewhere. She noted that the dynamics on set mimicked the script’s shift in perspective: A shirtless Farrell did his character’s yardwork and jokingly posed as though for a pin-up calendar. “He was the object – and a really, really good sport about it,” she says, adding that during those dinner scenes, Kidman would try to make him laugh by “talking about ‘watering the garden,’ and anything with a little innuendo.” (According to Dunst, Farrell lapped it up: “He loves women, he grew up with sisters. He says it’s his favorite movie he ever made.”)

For the young actress, who just turned 19, it marked the first time she worked on film unaccompanied by a guardian; both she and Dunst describe the mood onset as very “safe.” They even staged an era-appropriate Girls Gone Wild, flashing an indecent ankle under those corseted dresses. “Colin was probably the most naked person on set and I think Sofia was definitely very aware of that,” says Fanning. “She wasn’t looking to oversexualize the women in the way the original did.”

In fact, Coppola avoided nudity altogether. With the exception of a scene in which Alicia and McBurney are discovered in bed together, it wasn’t even a consideration. “[In the original], there’s an over-the-butt shot of the girl in bed with Clint, and it was so funny that we thought about doing that,” she says. “But when it came down to it, I just didn’t want to be shooting Elle’s butt.” Dunst also collaborated with Coppola for her own explicit moment. “There’s so many feelings going on with Edwina,” she says. “We wanted a bodice-ripper type of scene, but without any kissing, to make it more animalistic.”

Neither film, it should be noted, grapples with the period’s tectonic racial politics. In Siegel’s version, the late blues singer Mae Mercer portrays Hallie, a house slave. She is sidelined as a character – her motivations and her seemingly uncomplicated role among a group of white women go unexamined. And she is absent altogether from Coppola’s retelling; much like the battlefields, the miserable realities of slavery stay out of view. “I didn’t want to be disrespectful by brushing lightly over such an important subject,” Coppola admits. “I’m a Yankee, but I tried to tell the story through the women’s eyes, and not as political. To try to be empathetic with what they were raised with and what they believed in.” (Coincidentally, it was filmed in part on the same Louisiana plantation Beyoncé used for Lemonade.)

The biggest challenge for the director was negotiating the film’s suspenseful mood and the plot’s pivotal moment of violence. [Spoilers ahead.] Specifically, the sequences in which McBurney suffers after Edwina, shocked by his indiscretion, pushes him down the stairs. Shooting on 35-millimeter film, cinematographer Philippe Le Sourd plays beautifully with candelabra lighting and shadow, yet the gory realities of a broken leg were almost too much for the director. “I’d be meeting with the special-effects makeup guy,” she recalls, “and he’d be like, ‘Where do you want the bone to be popping out? How big do you want the wound?’ I was like, ‘You just go for it. Do your thing, because it’s not my thing at all.'” Coppola chides herself for not having a stronger stomach. “I grew up being on the Apocalypse Now set,” she says, referring to father Francis Ford Coppola’s 1979 masterpiece. “There were lots of buckets of blood and dead fake bodies around, and my brothers and I would play with them, do pranks.”

Whether it will ultimately be interpreted as an empowering story, and to whom, is up to the audience. “I think it’s feminist because it’s a female director … and you don’t see this many women working together that often in film,” says Dunst, who gravitates to female-driven ensembles (see Little Women and Bachelorette). At Cannes last month, where Coppola took home the award for best director – becoming only the second woman to do so – a foreign journalist asked the assembled cast if the moral of the story was that there was something inherently “unhealthy” about all-female environments. Kidman responded icily: “I thought we were doing just fine without him.” Dunst laughs about it now. “That’s exactly what Miss Martha would say.”