“We didn’t want any of the bullshit,” former Talking Heads drummer Chris Frantz says about Stop Making Sense, the band’s influential 1984 concert film. “We didn’t want the clichés. We didn’t want close-ups of people’s fingers while they’re doing a guitar solo. We wanted the camera to linger, so you could get to know the musicians a little bit.”

It was December 1983 when the group filmed three shows at Hollywood’s Pantages Theater, while on a tour for Speaking in Tongues that found them playing in an extended lineup with extra percussion, keyboards and guitar. The one thing the band wanted from the movie – directed by Jonathan Demme, who would later win an Oscar for The Silence of the Lambs ­– was something that would be the complete opposite of anything on MTV at the time. The film had long, drawn-out close-ups on the musicians’ faces, it barely showed the audience and it used dramatic lighting to exaggerate the choreography. The group, which consisted of Frantz, vocalist David Byrne, guitarist/keyboardist Jerry Harrison and bassist Tina Weymouth, financed the movie mostly by itself and by the time Stop Making Sense came out, that tenacity had given way to a hit. Filmgoers were literally dancing in the aisles as the movie played.

Last month, a 30th anniversary edition Stop Making Sense came out digitally and it is also being re-released at various theaters throughout the United States. Rolling Stone recently caught up with the drummer – who is still recording with his wife, Tina Weymouth, in the Tom Tom Club – to find out how the film holds up three decades later.

What do you think of Stop Making Sense the last time you saw it?
All the nice things that people say about Talking Heads? It just confirms those statements are true [laughs]. We were very fortunate in that everybody who worked on it did such a good job. I would pay 1,000 bucks to see that show [laughs].

How did the idea for the movie come about anyway?
We were all thinking that that it would be good to document that particular tour. We had rehearsals for about a month to learn all the material. Right when we were about to get on the road, Jonathan Demme came to one of our shows along with his girlfriend at the time, Sandy McLeod, and Jonathan said, “We would like to make a movie of this.” And we thought, “How nice.” Jonathan Demme was a new director then. He had done this movie called Melvin and Howard, which we liked very much. Jonathan’s not that much older than we are and he was hot at the moment, at least theoretically.

How did Jonathan plan the scenes?
At the time, he was also working on this movie for Goldie Hawn called Swing Shift. After seeing the first cut of the movie, she decided she wanted to completely reshoot every scene with her in it, so it was up to Sandy McLeod to follow the band around and make notes of what band members were doing what, at what time and when the cameras should be on them. She followed us around for a good month while Jonathan was dealing with Goldie.

Were you getting support from Warner Bros. at the time?
One thing that nobody ever mentions, particularly our singer, David Byrne, is the fact that the band paid for the movie. Yes, we got a loan from Warner Bros., but it was against our royalties so the band, the four of us, really coughed up the money. We didn’t have a whole lot of savings at the time, so we were basically putting our life savings into this movie, which we did and I’m glad we did, because not only did we get it back, but we have a great movie.

It was also the band’s decision to put it into very small college theaters and art houses around the country instead of trying to open big. That’s one reason that it succeeded as well as it did: It was able to have long runs at art theaters. The audience would keep coming back.

What do you remember about David’s intro with the playing “Psycho Killer” to a drum loop?
David put that together himself; I was not party to that or anything like that. He didn’t ask anybody, it was like “I’m going to do this.” It worked well.

When you get onstage, you listen to a headphone for a minute. Was Jonathan directing you?
No. In the headphone, I was listening to the tempo. Because we were shooting over three nights, we wanted to make sure each song began at the same tempo. So I devised a click track to listen to at the beginning. Sometimes when you play live, you might speed up a little bit, especially in punk, New-Wave style; the audience likes to get hammered, they like to have a lively performance, so we had to make sure it wasn’t too lively.

The movie has so many great close-ups on band members’ faces. What are your favorites?
Tina looks really angelic and great throughout the whole film, and I love when Bernie Worrell gives some of his weird glances at who knows what [laughs]. Bernie’s a funny guy to watch. David is awesome throughout.

Did it ever surprise you when David came over to the drum riser during “Life During Wartime?”
I’m just amazed he didn’t ever fall. He was moving around a lot, you know. He’s quite a remarkable performer or at least he was then.

How did the group work out its choreography?
Everybody did their own. The [backup singers] were great. Edna [Holt], Lynn [Mabry] were just amazing. They were not crazy about the outfits they had to wear, because, you know, they’re a couple of fine, black women, and they like to dress up. But David had them in like yoga clothes. They got used to it and I think it looked good.

What was the reasoning behind the costumes?
David said, “I want everybody to wear neutral colors because I don’t want anybody to stand out too much.” And then he comes out in the biggest white suit you’ve ever seen in your life [laughs].

Was that as surprise?
We did know he was going to do it, but we didn’t know it was going to look like until the suit was actually made. It was amazing. It was pretty funny [laughs].

What was the idea behind the suit?
We had been in Japan just prior to the tour, and David always said it was based on Japanese Noh theatre costumes where the main characters wear these great big square outfits, similar to his suit except theirs would be kimono style.

So did Jonathan Demme offer much direction?
No, he just captured it. The only directions we got were from Gary Goetzman, who was technically the producer. Gary said, “Don’t look at the camera and, for God’s sake, don’t pick your nose.” That was the amount of direction we had [laughs].

Were you surprised to hear people were dancing in the movie theaters when it came out?
I actually saw that happen and I thought, “Wow, this is cool.” I’d never seen that before, nor since [laughs]. Well at the Rocky Horror Picture Show, where there’s a lot of audience participation, but that’s a different type of thing. 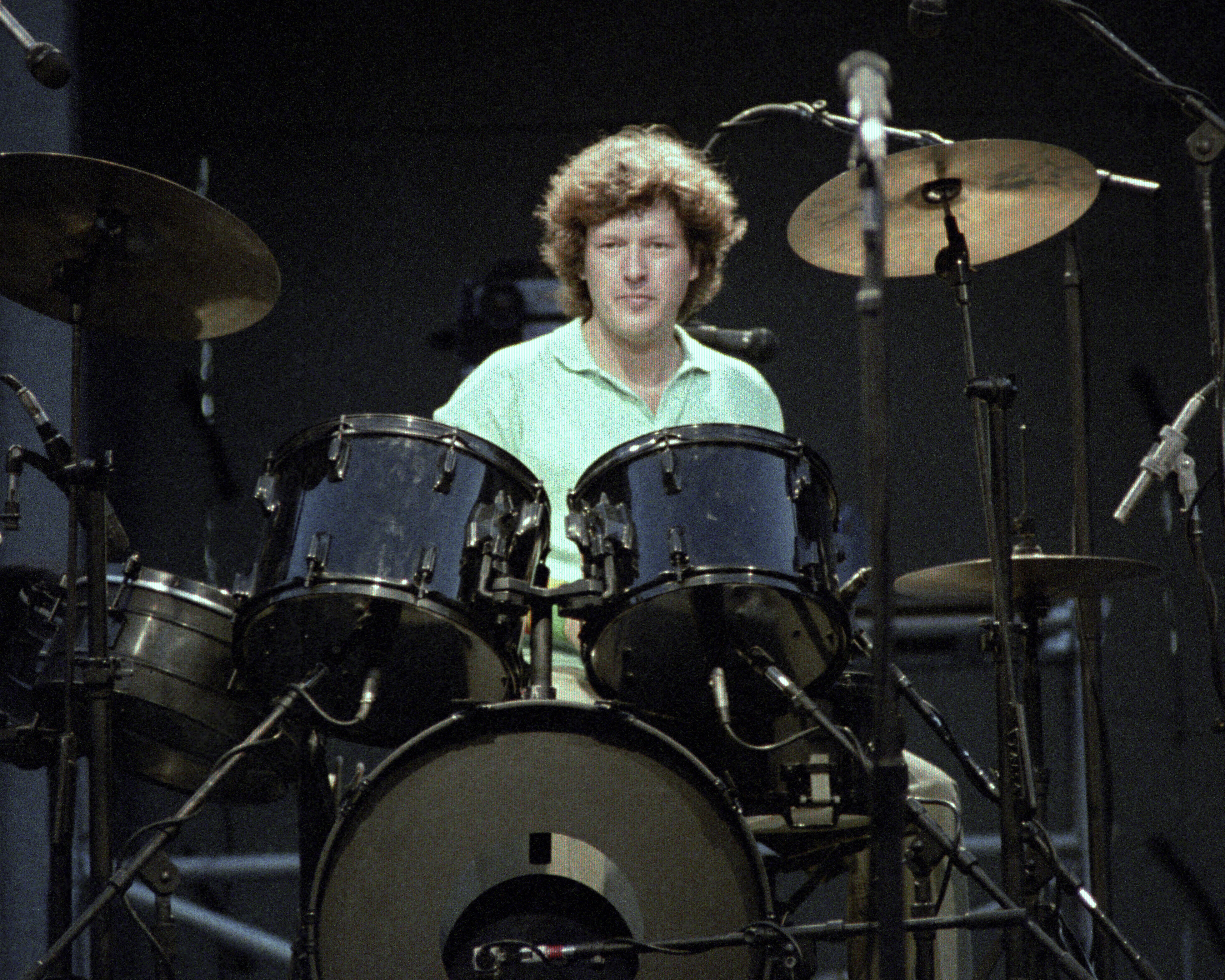 Was the Tom Tom Club section of the movie a regular part of the set from that tour?
Yeah, “Genius of Love” was a big hit at the time. It also gave David the opportunity to change into his big suit.

It also gave you the chance to use the mic.
Yeah, one of my only druthers about that movie is I wish I had been a little bit more reserved on the microphone but, you know, I was just so excited. What can I say?

A Talking Heads website is giving away a Blu-ray copy of Stop Making Sense that all four of you signed. Are you all on good terms now?
Tina and I are on great terms [laughs]. Jerry, I’m on very good terms. With David, I guess you could call it “email terms.” I haven’t actually seen him in person for quite a few years. That’s not my decision, that’s his. He likes to keep it to email, so whatever, I can play that game [laughs]. I can answer an email. Even though we’re not performing as a band, we still have things we need to talk to each other about from time to time. They sent us the Blu-ray and we signed them and sent them back.

What’s next for you and Tina musically?
We have about half a dozen basic tracks of Tom Tom Club recorded for a new album, and we’ve been talking about starting on a project called “Chris und Tina,” like German style. The music will be totally electronic and kind of Germanic, as opposed to rock & roll or funk. It’s inspired by Kraftwerk. That’s what we’re thinking about right now.

Finally, a previously unreleased instrumental song called “Theme,” from 1976, surfaced online. What do you remember about that tune?
It’s kind of a cool song. It was inspired by the Beach Boys. We played it for maybe the first six months that Talking Heads was in existence, and it never got recorded in a proper recording studio. But we do have a studio recording of it from a little basement studio of a friend of ours in the Shirts. We were practicing recording because none of us had done very much recording. So we would go from the Lower East Side over to Brooklyn and we would, thanks to the Shirts, use their little basement studio. We recorded that along with some other things, I recently baked the tapes and transferred them to digital, and they’re surprisingly good.

Will you be releasing those soon?
Maybe someday, there are no plans at the moment, but it could happen. A lot of times with these things, the reason they were never released is because we thought they weren’t that good. But you listen to them 40 years later and you think, “Damn, that’s not that bad, that’s pretty good.”