Taika Waititi: How I Made 'Thor: Ragnarok' - Rolling Stone
×
×

Like a candy-colored Jack Kirby acid trip, Thor: Ragnorak bounces all over the Nine Realms – taking its hammer-wielding hero from Asgard to Earth and some truly mind-blowing places in between. Yes, the latest adventure from the comic-book blockbuster factory ticks all the customary Marvel boxes. It’s a spirited adventure punctuated by heady bursts of CGI spectacle. It’s got just enough fan-service cameos to delight knowing viewers. And there’s at least one arguably gratuitous shirtless shot of its handsome hero (not that anyone is complaining).

But the movie (which hits theaters on November 3rd) also makes perfect use of Led Zeppelin’s “Immigrant Song” – twice – which is one of several key differences you can chalk up to Taika Waititi. The New Zealand actor and filmmaker has made a name for himself with smart, wacky comedies like the vampire mockumentary What We Do in the Shadows (2015) and quirky, sincere coming-of-age movies such as Hunt for the Wilderpeople (2016). His films are populated by imperfect, likable heroes who exist at mainstream society’s margins, and whose search for human connection requires a sharp sense of humor and a dose of unquenchable optimism. Waititi’s unmistakable stamp is all over Ragnorak, from playing up the comic gifts of star Chris Hemsworth to giving Cate Blanchett the opportunity to play Hela, the goddess of death, as one part Disney grand-dame villain and one part gothic seductress.

It’s also we get a Marvel movie that doubles as a weird buddy comedy that pairs Thor with Mark Ruffalo’s Bruce Banner/Hulk, who spend much of the film stranded on an alien-junkyard planet ruled by Jeff Goldblum’s royal Grandmaster, a supreme oddball who finds great entertainment in staging gladiator-style coliseum fights. (“There are 100,000 versions of Jeff Goldblum,” Waititi says. “We got one of the most pure, uncut versions.”) It’s also where Thor meets Tessa Thompson’s alcohol-soaked, Asgardian warrior-turned-scavenger Valkyrie and the Kronan Korg, an intimidating-looking rock-person who turns out to be a real softie – and is played through motion-caption by Waititi himself.

The director/craggy comic relief gave us his first-person thoughts on the making of Thor: Ragnorak, creating the unique look for the film, injecting his sensibility into a massive corporate blockbuster and how he managed to get Blanchett to go full Maleficient for her role. As told to Gina McIntyre.

Bringing His Sensibility to the Marvel Universe
Basically, I just went for it and left it to them to rein me in when they thought I’d gone too far. I started by identifying the more human, relatable moments [of the script] and trying to create those kind of almost like my independent films. An example of that is when you have Hulk and Thor sitting on the bed talking about emotions and stuff and apologizing after having an argument, which is something I don’t think I’ve ever seen in a superhero movie. It’s something I do believe helps endear us as an audience to these characters. That was my goal, really: to approach it as I would my normal films and have Marvel help me with the bigger spectacle elements. I tried to foster an environment on the set where it felt like all my other films because I work with my friends all the time – that’s what I want. I want to be with friends who aren’t bringing an ego to work and aren’t precious about anything.

Casting Cate Blanchett as Hela
[Cate] had said to me when we first met that she wanted to take a break from crying, all this dramatic acting [she’d been doing lately]. I guess what she was saying was, “I want to take a break from winning Oscars.” She wanted to do something that was silly and fun but also cool, something that her kids could watch: I can’t imagine the family sits around on a Sunday watching Carol. That came through on set – she was very loose, which was very important to how the character comes across. Hela has won countless battles in the past; she’s very confident in herself as a leader and as a fighter. Cate has won countless awards in the past and is very sure of herself as an actor. She seems like she’s enjoying herself, and I think that mirrors the way Hela’s enjoying coming back to Asgard and taking over. 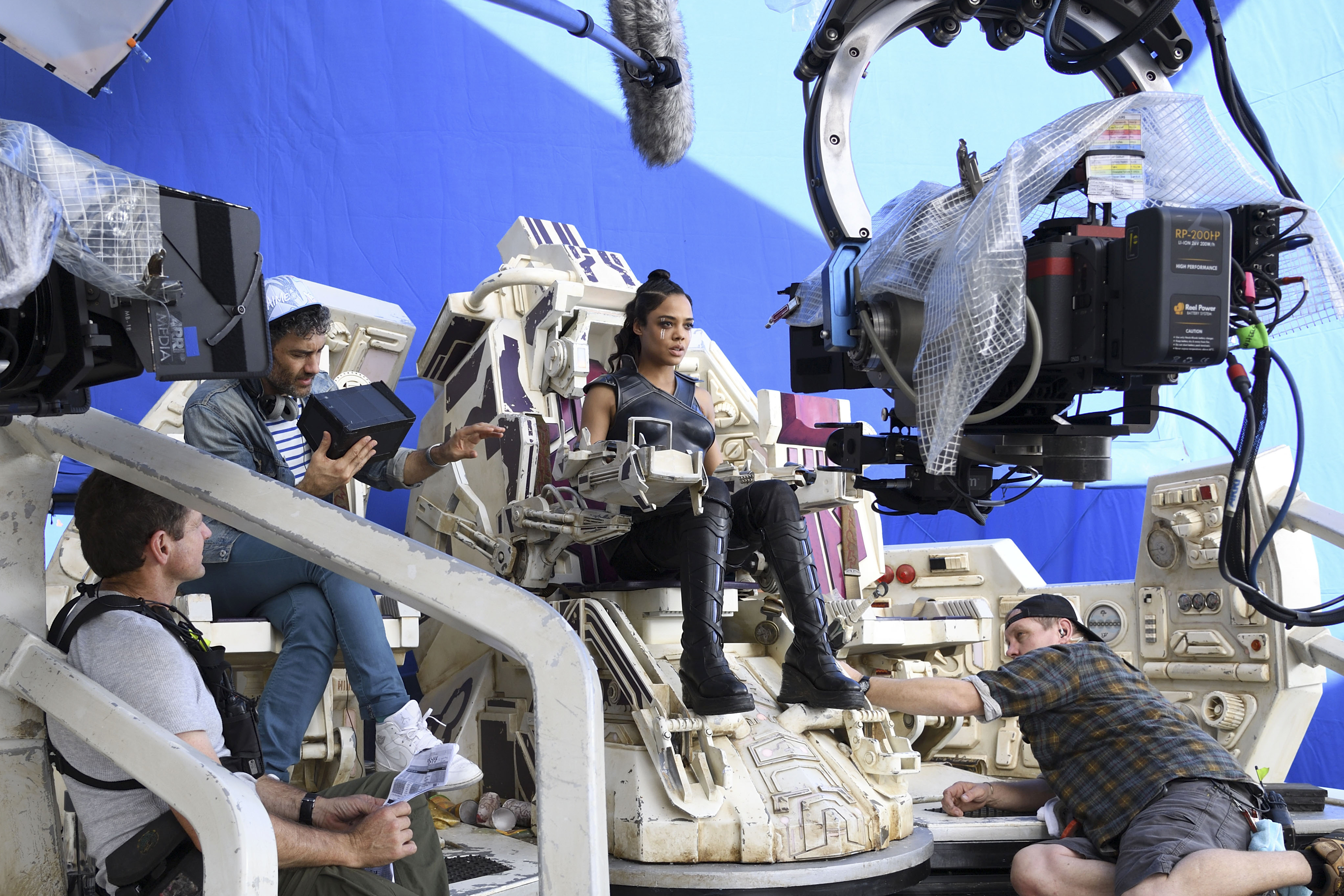 What Valkyrie Brings to the Mix
She’s one of the more interesting characters. I think typically what would happen is you would have Thor and Banner, Chris and Mark, riffing off each other, doing their banter and stuff. Valkyrie would be the character who’d maybe try to rein them in and corral them. She subverts what we expect – even down to her introduction in the film. In every other film, the hero is being [surrounded] by a bunch of dudes, a mysterious figure runs in, takes off their mask … and it’s the love interest. What I think is different and cool is she’s not the love interest. There’s flirting going on, but that’s not the point of her character. When she arrives on the scene, the first thing she does is fall off her spaceship in the least sexy, least elegant way possible. It’s telling the audience: Whatever you expect from the stereotypes and what’s been done 1,000 times before, you can just forget it.

Creating the Film’s Look
What we wanted from Sakaar was very bold and vivid – something different from Asgard, which had been established in the other films. How we achieved that was leaning very heavily into the art and design of Jack Kirby, the brilliant comic book artist. That was something Marvel was very enthusiastic about because Jack’s work was so influential and so important to the MCU. We really looked at his work and said, if he had created Sakaar, how would it look? A lot of it had to do with the color. His art doesn’t quite translate from the two-dimensional format, from the page into live-action. It’s sometimes very hard to figure out what you’re supposed to look at. It took a bit of trial and error.

The idea really is that everything is built from junk. The whole planet is the meeting point of a bunch of worm holes, so all the sort of lost socks end up in this place. The city has been cobbled together by the locals out of things that have fallen from the sky, which is why there’s such an irregular form to the rooms and the buildings. Everything’s slightly asymmetrical. The society we’ve created there on the outskirts is kind of a big rubbish dump. The poorest people scavenge stuff that comes from the sky. The city is where the tallest, most elegant buildings are because they’ve got all the best stuff. 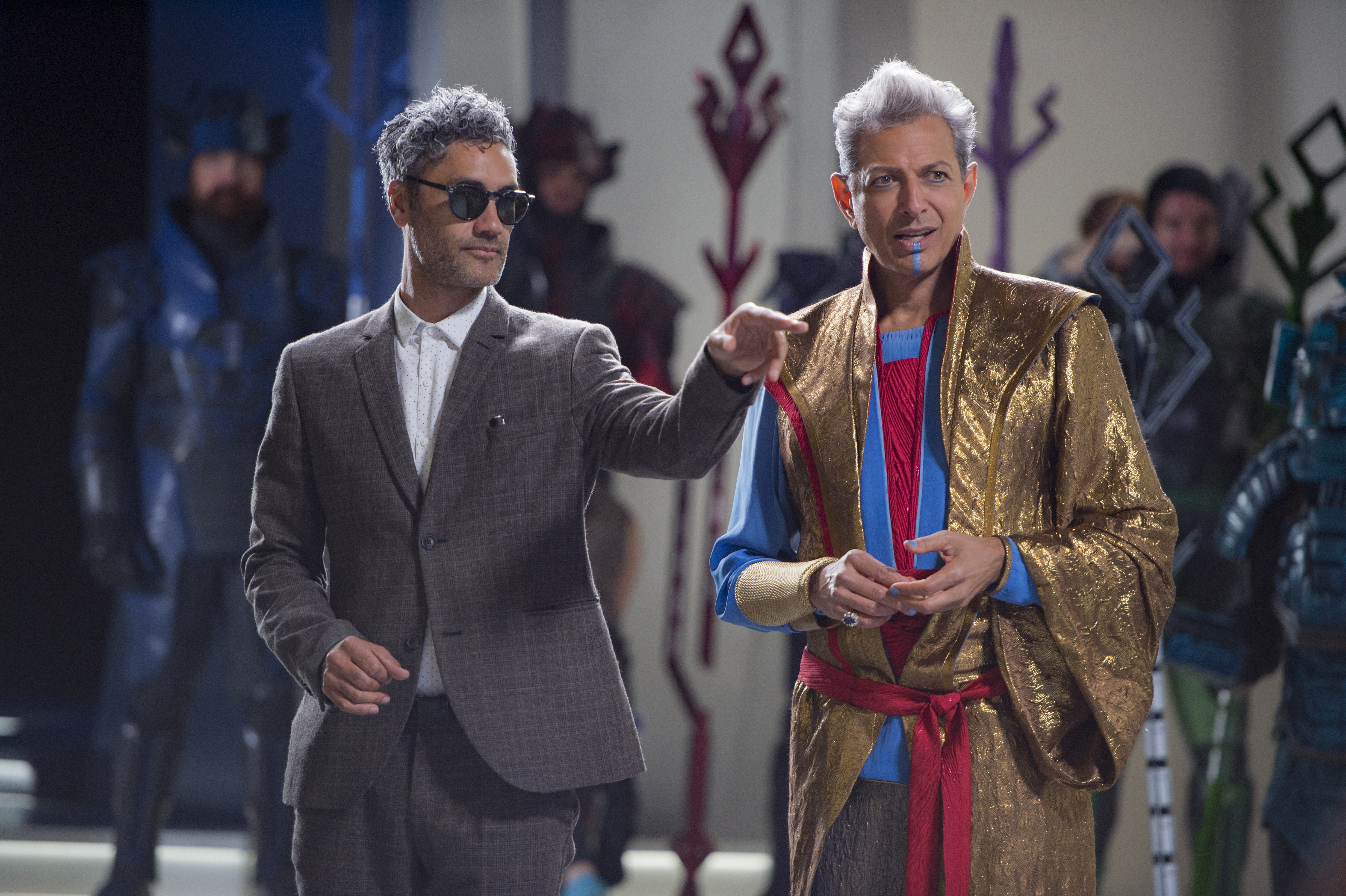 Finding the Funny on Set
My thing with comedy in these kinds of films – in blockbusters in general – the jokes really feel like they were written eight months before they were shot. Whereas all the humor in this film was discovered on the day we were shooting – which is why we had these tangential cerebral moments where people are just talking about weird, mundane things but in a hilarious way. [That made] it feel so different to every other film like this. For me, it was about tapping into Chris [Hemsworth’s] qualities in the real world. He’s not only good looking and good at everything, but he’s funny and he’s charming and he’s the kind of person [with whom] you want to go on adventure. That’s what I wanted for Thor.

Directing Himself in a Motion-Capture Performance
I loved it. I felt it was very freeing. I didn’t enjoy looking the way I looked in those pajamas – it’s very embarrassing having to direct a crew or other actors when you look like that, very hard to be taken seriously or to be listened to. But the acting was fun. I always put myself in my movies, so I was always going to play something. That was one of the smaller roles that hadn’t really been snapped up by the time we started getting close to shooting. I thought, Oh, I’ll just do that. I started playing with the voice and made him kind of a rural New Zealander who happened to be an alien. I thought, We’ll probably re-voice this later, but it’s alright for now … I’ll crack some jokes. But then people loved him. The idea of playing a rock guy who’s a very gentle soul, that to me was the ultimate. When I play characters, I like playing people who just comment on stuff, stand around and talk.

Fine-tuning Mark Mothersbaugh’s Score
From the start, I wanted a Jean-Michel Jarre-esque soundscape approach where it was just synths and beds of different sounds that would wash over the film. We wanted to pinpoint that stuff mainly in Sakaar. I told that to Mark, whom I’d always admired. Once we got him on board, I was like, Obviously, we’re going to do some traditional score, but here’s another thing I want to look: synth stuff, a real analog sound. He said, “Funny you should mention that.” Then he pulled out 10 different synthesizers from the Seventies and Eighties, all this analog stuff … a programmable Moog that Robert Moog gave to him back in 1980 or something. I felt we were in good hands then. The sounds that came through are exactly how I’d imagined it.