How Danny Boyle Made a Near-Perfect 'Trainspotting' Sequel - Rolling Stone
×
×

“I’m not sure that Americans have penises,” Ewan McGregor declares, carefully and painstakingly keeping his expression as deadpan as possible.

Danny Boyle’s ears suddenly perk up. “Wait, your penis isn’t there? Did they blur it out?” He lets out a laugh that might be characterized as the sound of exploding joy. “That would explain a lot!”

“They have to import them from Scotland,” Jonny Lee Miller adds, at which point McGregor’s stone-faced look begins to crack a bit.

“Scottish sausage!” Ewan Bremner chimes in, chuckling. “It’s where the term comes from.”

“No, I really do think the American version blurs it or cuts it out entirely,” McGregor continues, “because in the British version, you can very clearly see …”

Danny Boyle on 'Steve Jobs,' Sorkin and the Fassbender Effect

“Yes, Ewan, trust me, you can very clearly see it!” Boyle says, at which point the entire table loses it.

If you had told the director and three-fourths of the core cast of Trainspotting a decade, or even five years ago, that they’d all be together in a New York hotel room, promoting a new movie and joking about McGregor’s infamous nude scene while a blizzard raged outside, they might have thought you were on some serious mind-altering, hallucination-inducing drugs. But there the quartet is, Boyle and the men who respectively played Renton, Sickboy and Spud (Robert Carlyle, the actor who gave life to the psychotic Begbie, is still back in the U.K. working), joking with each other as if the last 20-plus years had never happened. Except the middle-aged men who are siting here discussing T2: Trainspotting, the cheekily titled, long-awaited, long-delayed, unlikely-it-would-ever-become-a-reality sequel to their iconic 1996 film, are proof that time has indeed passed. You can still see the resemblance, but they’re no longer the twentysomething lads who snarkily asked filmgoers to “Choose life.” Those guys have long since faded out of the rearview mirror.

And as the four of them will happily, eagerly tell you, the fact that T2 revolves around the notion that these characters have gotten older if not necessarily wiser, that the world has moved on around them even if they haven’t quite let go of the past, is exactly why they all signed up to do it. No one was interested in simply remaking the first movie. The idea was that they’d embrace the fact that these characters who represented the cinematic epitome of mid-1990s Britpop rebel chic are now slightly pathetic man-children. “The moment I read the script and realized, ‘Oh, I’m not supposed to be pretending I’m the same guy who made the original, I could relax,” Miller admits. “It’s supposed to be different. I’m not supposed to be the fucking cool guy with dyed platinum blond hair anymore. I’m the fortysomething guy who’s not cool anymore.” A beat. “With dyed platinum blond hair.”

So Boyle abandoned the idea and went on to make Slumdog Millionaire, win Oscars and direct the opening ceremony of the 2012 Olympics, among other things. Then, as the 20th anniversary of the original movie began to roll around, he decided it was time “for one last go. A bunch of us – myself, John, Irvine, [producers] Andrew MacDonald and Christian Colson – got together for a week and talked through what we might do. When we all sat down that first time, every single person there thought, We’re not going to do this. By the end, we all had an idea that was lot more personal and made a lot more sense. Suddenly, it was: This is why we wanted to go back to these guys in the first place!” 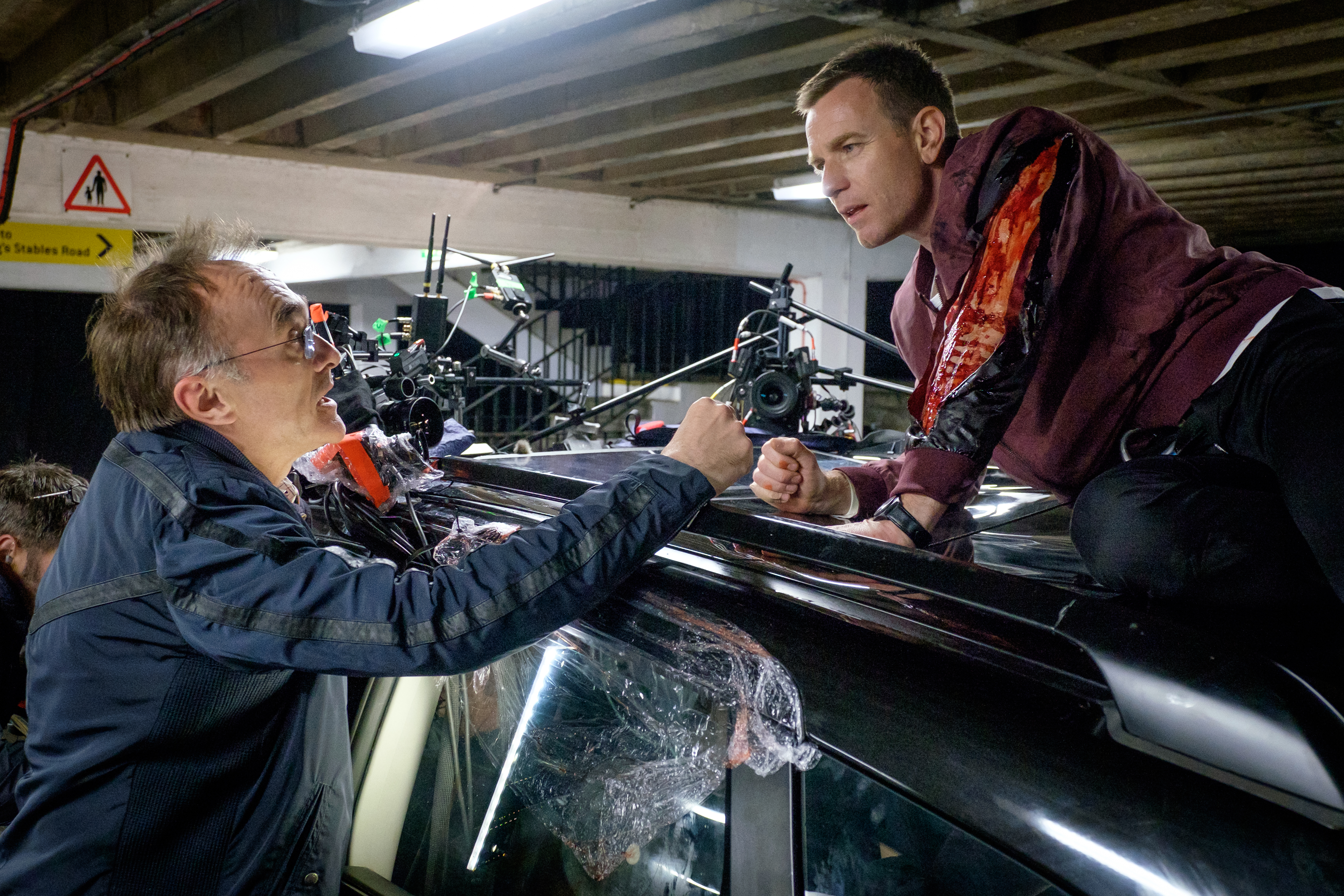 The gist was essentially that Renton, who we last saw hightailing it out of the country with the gang’s loot, has been living in Amsterdam for the past two decades. He’s chosen life, a career, a wife – and he has chosen to return to Edinburgh, and to make amends with his mates. Spud, once clean, is back on smack and bottoming out hard. Sickboy has traded heroin in for cocaine, and now runs a rickety pub when he’s not blackmailing the businessmen having kinky sex with his Bulgarian working-girl girlfriend (Anjela Nedyalkova). And Begbie, who’s been doing hard time in prison, has just busted out of the joint around the time Renton comes back to town. Suffice to say, he has some unfinished business he needs to settle with the person who ripped him off all those years ago.

And while there are plenty of the anarchic, free-for-all moments and the same go-for-broke stylistic brio that characterized Trainspotting, the sequel leans hard into the idea that you can never go back to those defining moments of youth – in real life or onscreen. The original began with McGregor’s junkie sprinting down the street; the new film begins with a stockier metro-professional sweating away on a treadmill. “It opens with someone running and going nowhere – I mean, it’s fucking brilliant!” Bremner enthuses. “You read it and immediately went, this is how the sequel starts? Oh, this is ambitious. I think all of us wanted to be part of something audacious, but my first thought after I finished the script was: Fuck, can we all pull this off?”

“It took me 10 minutes of being around everybody to find Renton – as I was being smacked over the head with a poll cue. That was Day One for me.”-Ewan McGregor

Slowly, Boyle began to get the proverbial band back together – including McGregor, with whom the director had not worked with since a highly publicized falling out in the late NIneties. (The two friends would not speak for almost 10 years, until the actor presented the director with a special BAFTA award in 2009 and they cleared the air.) McGregor was still in Los Angeles finishing up a project when production began; he mentions that he watched the first movie, “which I hadn’t seen in ages – and it was the American version with no penis” on his laptop on the flight over. “I basically ran into Ewen when I got on to the set, in the lunch line,” he says, “and told him, ‘I have no idea if Renton is still in me. I’m shitting my pants here, man.’ And Ewen, bless him, said, ‘We were all shitting our pants, but you’ll see. Just get on set and you’ll fine.’ He was right. It took me 10 minutes of being around everybody to find Renton – as I was being smacked over the head with a poll cue by Sickboy. That was Day One for me.”

Everyone seemed to find the old groove within a few scenes, the group admits. More importantly, as production went on, everyone seemed committed to honoring the old movie while not making T2 a sort of greatest-hits memory-land tour – the equivalent of Trainspotting: The Amusement Park Ride. “There’s really only one very explicit reference to the original in the movie,” Boyle points out, referencing a scene in which Spud finds himself on the same street that he and Renton are running down in the first movie’s opening scene – and sees his younger self run right past him. “Everything else was sort of spur of the moment, to be honest.” McGregor ended up inspiring two nods to the 1996 movie on the spot: One was a scene in which he was crawling through a building’s rafters and ended up replicating Renton’s exit from the “worst toilet in Scotland”; the second came after the actor had to tumble down off the roof of a car. “I go over the [hood] and end up on the ground,” he recalls, “and then I asked Danny, ‘Should I get up and laugh?’ Suddenly, it’s the exact same thing that happens when I get hit by the car in the original.”

“We filmed it both ways,” Boyle adds, “because Ewan thought, ‘Well, bit too on the nose, isn’t it?’ Then I saw that take and was like, Fuck it, that’s great. We’re definitely keeping it.” 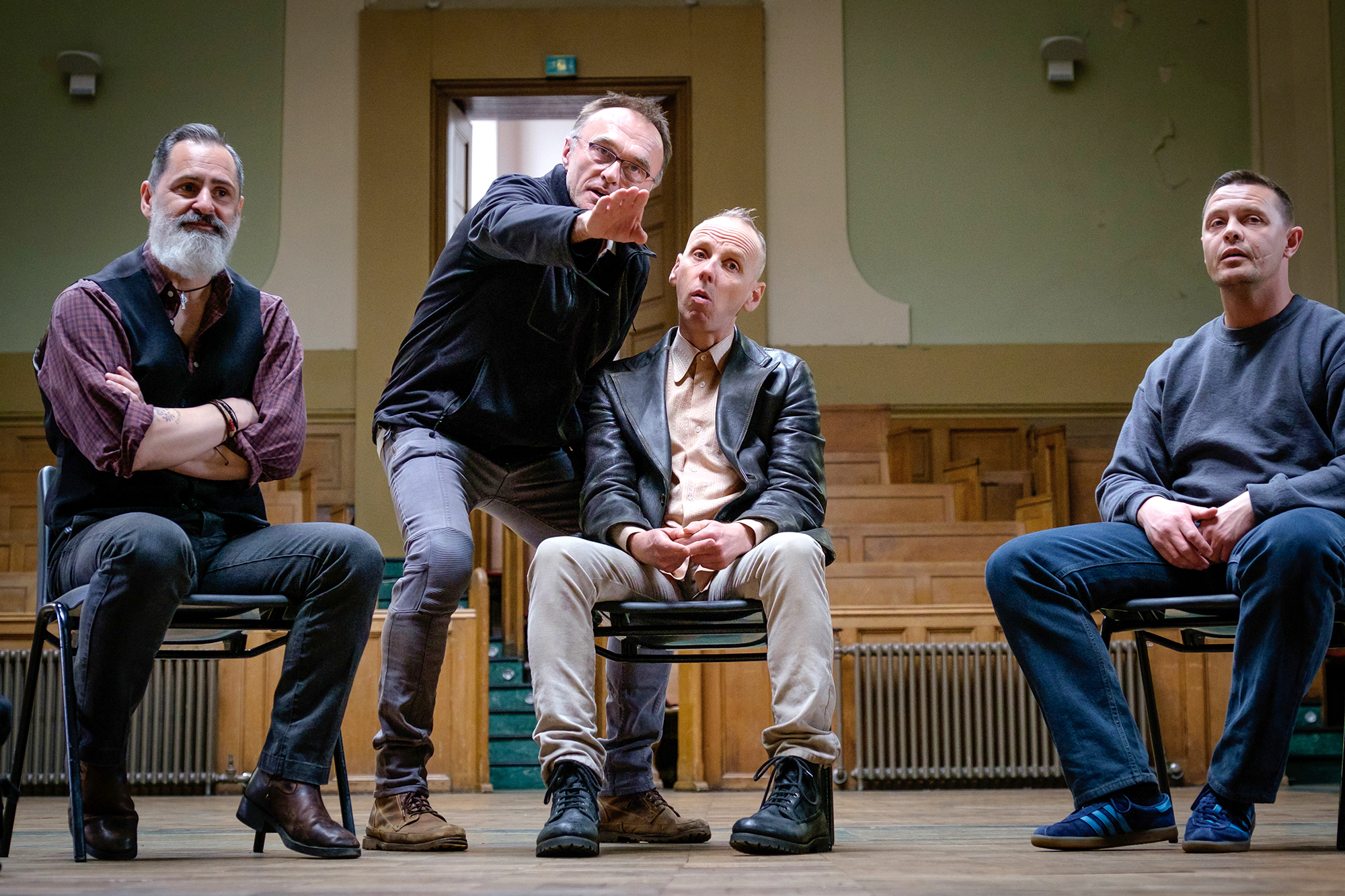 There was also the question of whether they’d revisit the first movie’s more memorable musical selections, given that Trainspotting‘s soundtrack is as much a mid-Nineties cultural touchstone as the movie. You can hear the strains of Underworld’s “Born Slippy” play very briefly behind one scene; in another, McGregor puts the needle on a record and the bombastic assault that kicks off “Lust for Life” hits your ears before he violently yanks the LP off the player. Given that Boyle was dead-set against too many nudge-wink callbacks – he claims he purposefully ixnayed any voiceover narration for T2 to avoid comparisons and had considered not putting Trainspotting in the title at all – so he wasn’t even sure he wanted to include Iggy Pop’s tune. Then he got an odd text one day.

“It was Liam Howett, of the Prodigy,” the director recalls. “We’d used one of their songs in A Life Less Ordinary, but I don’t really know him; I don’t hang out with rock stars. Somehow, he got my number and said, ‘I hear you’re doing it again … I’ve started making a remix of Lust for Life. Do you want to hear it? I need to know whether it’s worth finishing.'”

“So you didn’t ask him to do it?” McGregor inquires.

“No, he just sent me like 90 seconds of it,” Boyle replies. “I thought, oh hell, okay. Then I pressed play, and heard that grinding noise” – he makes a ggggrrrrtttt sound with his mouth that resembles a piece of heavy machinery getting a spoon stuck in its gears – “that he puts over the opening notes, and thought, ‘Found it. That’s how we do it'”

“He walked around with this top-secret track in his pocket for like six months!” Miller cries. “I kept asking him, ‘Can I hear it? Can I hear it, please?’ He never responded to me.”

“Because then it would have been everywhere!” Bremner exclaims.

“Half of London would have had it,” McGregor yells, prompting a fresh round of laughter.

“It was a philosophy thing, really,” Boyle continues. “Because look, the movie hit on a cultural moment and, for a lot of people, it defines the 1990s for them. It made all of our careers, too – it certainly made mine. So there was this pressure of doing a sequel and all that entails: ‘Oh, well, you have to include this, and include that, and do this here as well …’ There’s a ridiculous equation you have to adhere to with sequels: If it’s completely the same, you’re dead. If it’s completely different, you’re dead. So it has to be just enough the same and just different enough to work.

“But if you do it right,” he continues, “you can find that balance, and I think we found it it here. I think that’s what fans wanted. You know, it wasn’t until I started putting together a rough cut for this second film that I really understood what the original Trainspotting was about. People always said, oh, it’s about drugs, or youth, or friendship. But what it’s really about is masculinity and how you defined it in the mid-Nineties. And then I realized I was making a sort of statement with this movie about older masculinity now, and how when its stunted, it sort of wrecks everything around it, especially in relation to women. What happens when that becomes toxic? And to explore that with these guys …” Boyle’s wide grin somehow becomes even wider. Everyone else at the table smiles right back at him. They all suddenly seem 20 years younger for a single solitary second. And then the moment passes.