“There was blood everywhere – a lotta blood,” Slipknot percussionist Shawn “Clown” Crahan tells Rolling Stone with glee in his voice. “It was on my shoes. It was on my jacket. It’d be on monitors.”

The percussionist, who also works as a photographer and provides his band with many of its stomach-churning visuals, is talking about Officer Downe, the first feature film he’s directed. The movie, which just came out, is an adaptation of the gory graphic novel of the same name about a policeman who is brought back from the dead to battle anthropomorphic animal baddies, a dynamic martial artist and an evil nun. It stars Sons of Anarchy‘s Kim Coates as the unstoppable titular officer and features a cast that includes Alison Lohman (Drag Me to Hell) and Lauren Vélez (Dexter), among others. Crahan has filled it with bright, stark comic-book colors, violent-looking special effects and, of course, gallons of his own special homemade concoction for stage blood.

“I’d always laugh because there were literally guys on the set who were hired to clean up the blood every day, and I’d just walk away and have a cigarette,” he says. “I personally dumped the blood on the floor in some scenes. I’m like, ‘More here. More there.’ And they’d follow me with a squirt gun spraying it.”

5 Things You Didn't Know About Slipknot

Crahan’s main concern was staying true to the source material, which he’d only discovered just before he signed on to the project. His manager had met with one of the movie’s producers and realized that Crahan would be a good fit for it, so he passed him a copy of the graphic novel. “I saw the first page and I shut the graphic novel and said, ‘I’ll do it based on the first page alone,'” Crahan says. And what was on that first page? “It was Officer Downe giving a chick a lot of orgasms.”

But beyond embracing the graphic novel’s flair for perversity, he felt a duty to do right by the story that the comic’s writer, Joe Casey (also the movie’s screenwriter), had come up with. “This is somebody else’s work, and it’s very important for me to respect that work,” he says. “I tried my very best to recreate the comic book. I know how sensitive fans are, and I’m a fan of many things that Hollywood has ruined. So it was very important for me to respect Joe Casey and the character.”

To that end, Crahan encouraged the film’s star to push his performance to the physical limit. “Kim Coates did pretty much 100 percent of his own stunts,” the director says. “There’s a part of the movie where he’s hung upside down and being beaten by prisoners. He was hung upside down for 15, 20 minutes at a time, blood rushing to his head. And believe me, actors really don’t like that crap. But I just have no sympathy.”

That merciless attitude was hardly the only thing that Crahan carried over from Slipknot to the making of Officer Downe. Another aspect of the band that came in handy was his knowledge of creating costumes. Since Slipknot produce their own Halloween-ready masks, Crahan put his skills to use working on the “Fortune 500,” a group of villains with animal faces, and worked closely to get them made right. “I picked everything that you see,” he says. “The color, the outfits, everything. It was inspired by the comic but hand-done by ourselves.” 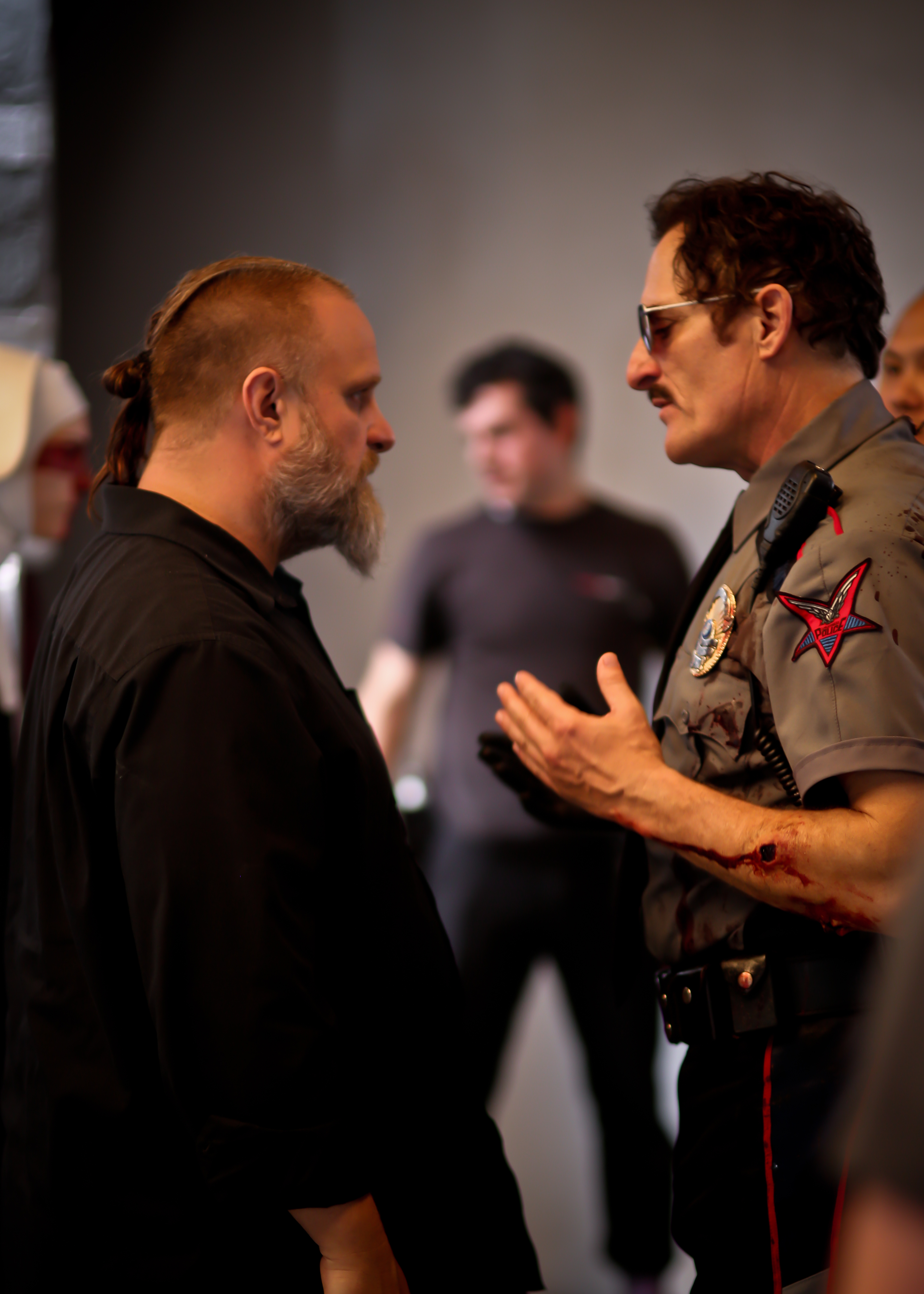 That said, Crahan is not about to kick up his feet and take an extended vacation anytime soon. With Slipknot on a break after a few years of touring in support of their .5: The Gray Chapter album, Crahan intends to use the time to assess what he wants to do next. He has a plan to get together with Slipknot guitarist Jim Root in early February and start writing new music – “because we want to write,” Crahan adds – and they’ll leave the date they actually go back into the studio up in the air. In the meantime, he hopes to make another film. “I was born to make movies,” he says. “I think it’s more a matter of who I was born to make movies with.”

That last remark aside (he alludes to on-set personality conflicts but is not specific about what happened), he claims to be “190 percent satisfied” with Officer Downe. He’s particularly happy with how the graphic novel’s content dovetailed into his own interests as a visual artist. “I’m into fashion, death, sex and clothes,” he says. “I work really hard to portray things that you’re not going to see at Walmart.”

When asked why his art, whether onstage with Slipknot or behind the camera, tended to veer toward the violent, he demurs. “I don’t look at my work as being violent,” he says. “Officer Downe is more campy than anything. It’s a comic book, so it’s funny to me.” He likens it, in a way, to the “splat-stick” horror of the Evil Dead franchise. “American Psycho is violent,” he says. “Apocalypse Now is violent. Officer Downe is a comic and not violent to me.”

But no matter the intention of the movie, Crahan still cannot escape the sheer amount of blood he had to face on set. “It’s got its own smell,” he says. “It doesn’t have a smell like real blood clotting or whatever, but it’s got its own funky little smell and after a day of drying, it’s just ugh. For one scene, Kim Coates was covered in blood all the time, and we had eight of his shirts ready to go: pre-blood, blood, all-out blood, dead or alive. … It’s very sticky and it’s a pain in the ass. When I got it on my shoe, there was no getting it off.”