Trapped in a giant, furry suit, Peter Mayhew had only his emotive blue eyes and his seven-foot-three body to help him bring Chewbacca to life — and he did it, making Han Solo’s fuzzball co-pilot as real as any of the homo sapiens around him. In November 2015, Mayhew, who died on Tuesday at the age of 74, called me for an interview meant for Rolling Stone‘s Star Wars: The Force Awakens cover story. Here, for the first time, is that full conversation.

Is this a uniquely exciting time for you?
It really is. I’ve been in the business a long time and I’ve never seen anything like it. It’s going to be anxiety and I’m going to enjoy it.

How did you first get word that you were going to be needed back for this film?
Well, we did the original trilogy and then we got a call for Episode III where they needed Chewie back to get Yoda out of danger. Nobody said anything about it until, obviously, they were going through the script and thought, “Oh, we’re going to need Peter.” For this one? I get a call from J.J. Abrams, “Hey Peter. How are ya?” “I’m fine.” “Well there’s a little thing I’d like you to do for me.” “What’s that?” “We’ve got this new film coming out and we would like you to participate in the movie. Go to England where we’re filming blah blah blah blah. Do you think you could do it?” I said, “Yup. I don’t see why not.” I explained that I had just had a medical procedure before we even started — I laid my cards on the counter. I said, “Look, I can’t walk. I can do most things, but the only thing I can’t really do is walk. But I can do the facial expressions and everything else like that for Chewie.” And he said, “Right, we’ll find out what you have to do and we’ll get it done.” So I was very very pleased.

Unlike your peers from the original trilogy, once you put the costume on you can look in the mirror and see the same Chewbacca you were in 1977.
Yes, yes. I haven’t put that much weight on. Chewie is a little bit more rotund but he’s still smaller than some of the other Wookiees that were in Episode III! In this one they precisely duplicated the outfit from the middle trilogy. You will not be able to tell. I had to be there to get the fittings right and the head and everything else for that particular character. 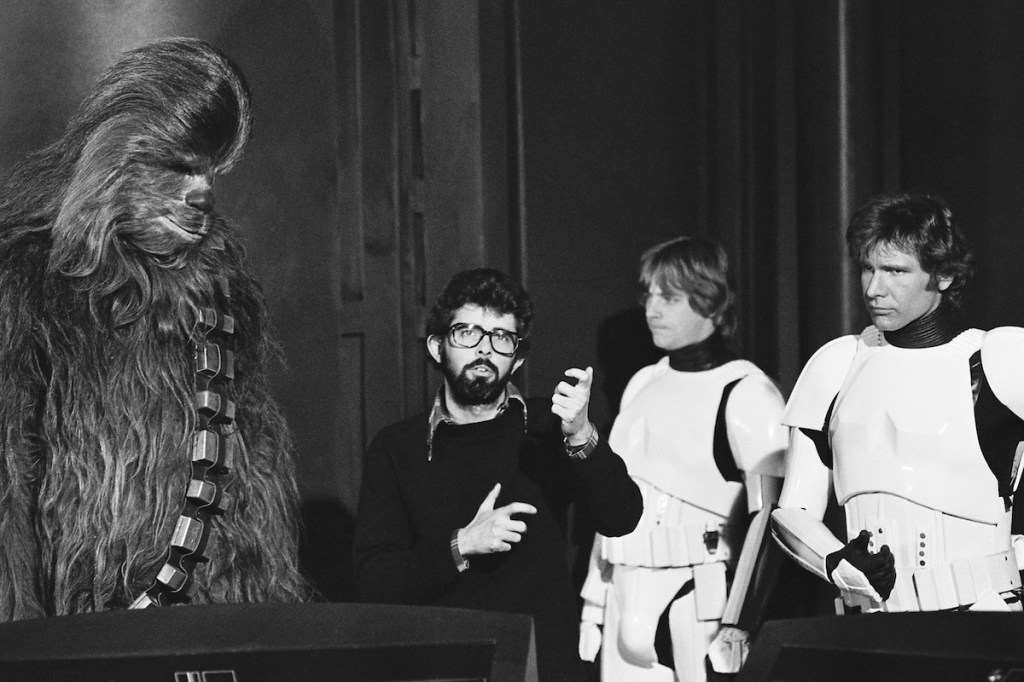 Peter Mayhew as Chewbacca, George Lucas, Mark Hamill and Harrison Ford on the set of ‘Star Wars: A New Hope.’

What was it like doing a scene with Harrison Ford for the first time in three decades?
It was very interesting. Harrison is a magnificent teacher. He teaches you what to do and how to do it. You just follow — you work off his words to get the reactions for Chewie.

How have you coped with the acting challenge of playing this character over the years?
George [Lucas] told me right away it was going to be a mime character, because they put the noises on afterwards. It makes it easier for me because just try making loud enough noises through a mask! It’s very hard so you do as well as you can, and then they take it to the sound studio and put their own voices in it. It’s not easy, really.

A lot of your fellow actors told me that it was an extremely moving thing to see you in costume in the Millennium Falcon again — and as a fan, it was amazing to see it in the trailer, which you helped debut at the Star Wars Celebration in California.
I had goose bumps, I tell you. You can imagine how weird it felt to have seven thousand people looking at that trailer and standing up cheering because they wanted Chewie in the movie. It was a phenomenal experience. And I won’t ever forget it.

What stands out most in your memories of filming this new movie?
I think it was actually getting back into the Falcon. Because it was exactly the same size. They used the drawings from the original Falcon to make it the exact same size as the one we were shooting on. They both had racing car seats on sliders in the cockpit, so with me and my long legs, I was able to get in there reasonably quickly, without too much fuss. All the stuff like that actually worked.

Harrison told me a little bit about his accident on set, when the door of the Falcon slammed on his leg. Were you right there when that happened?
I was close by, let’s put it that way. I saw what they were doing, and was not in a position to help, because there were stagehands and a lot of other actors there who could help more than me.

I was just talking with Anthony Daniels about his favorite C-3PO moments from the original trilogy. What were your favorite Chewie moments?
I think one would be the chess game in Star Wars, because there was a checkers board, but no characters on there. So how do you try and play chess when you haven’t got anything on the chessboard to play? And the answer is, they put them in afterwards. Empire [Strikes Back], it was when we were on Hoth, and there was a shot of the big doors closing, with Mark [Hamill] and Harrison outside. It’s when Chewie’s under the Falcon, and he sees the doors close, and he lets out one hell of a growl… hell of a roar. And that, we did in about two takes. If you watch it, it’s very emotional.

It is! It’s unforgettable.
Yeah, oh yeah. It was wonderful. [Return of the] Jedi? I suppose when we were up on Jabba’s barge, on the skiff, waiting to go over, because the skiff that we’d come alongside on was 30, 40 feet up in the air on stilts, and it was 15 feet long, and it had maybe a half a dozen people on it. Billy [Dee Williams] was there, Han was there. And it did start to rock back and forth at certain stages! But we got over it. And the film carried on.

What is your theory on why people love Star Wars quite this much?
Well, it’s a family film, for starters. When it came out, when the original Star Wars came out there was nothing around anywhere in the world that you could take the whole family together from grandkids to grandparents. Star Wars comes along, the kids love the robots and everything else. The parents look at it and think, “I could do that.” And the grandparents enjoyed what they thought was the love triangle between Carrie [Fisher] and Mark and Harrison — it works out that Harrison gets lucky.

And how would you sum up Chewbacca’s role?
My character is a teddy bear, basically. I bet you, if you looked around your office, how many people had a teddy bear as a youngster or a security blanket as a youngster? And that’s what Chewie is, he looks after everybody.