Watch Mute,
writer-director Duncan Jones’ years-in-the-making pet project (now
streaming on Netflix), and you’ll find yourself in a very familiar, very
typical sci-fi noir scenario. The movie’s hero – an Amish, strapping Alexander Skarsgård left voiceless from a childhood accident – lives in a future-shocked Berlin circa 2048. He
splits his time between a shabby apartment and the sleazy strip club he bartends at; the
latter is also where his blue-haired lady love (Seynab Saleh) works as a cocktail
waitress. Then, suddenly, she goes missing. And down these mean dystopic streets
Leo must go, trying to unravel a mystery amongst the hovering cars, neon lights,
polluted skies and broken dreams.

So far, so Blade Runner. But lurking on the sidelines is another narrative, one involving two AWOL Army surgeons who ply their trade on the underground sew-and-slice circuit. One has a weakness for loud Hawaiian shirts and martinis, as well as showcasing what might best be described as a normal mustache run amuck; the other sports long, hippie-ish blonde hair and granny spectacles. Both favor smirks over smiles. If you feel like you’ve seen this perpetually wisecracking pair somewhere before, well, that’s on purpose, one more signifying influence worn on a sleeve already cluttered with them.

But the dose of meta-anarchy this duo brings to Mute is not just welcome but invigorating, ingenious, life-saving – and that’s completely thanks to the casting coup of getting Paul Rudd and Justin Theroux to play them. And as the two actors sit in a SoHo hotel room, far away from some worst-case-scenario German cityscape and already deep into a press day, they find themselves wrestling with a question that has taxed some of our greatest contemporary minds.

“What the hell is Crackle, exactly,” asks Theroux, 46, partially rhetorically.

“No, the app on your phone,” Theroux says, referring to Sony’s bid for a space in the online-content arena. “I see it and I always think, ‘What the fuck are they putting on there?’ Apparently, they have a big comedy slate?”

“Well, comedies with mid-range budgets, they’re hard to make now,” Rudd notes. “Something like I Love You, Man, [his 2009 brom-com with Jason Segel], around that $35 million budget range … I mean, now they go straight to TV, right?”

“Yeah, but that’s because” – Theroux leans forward and talks directly into the digital tape recorder in front of him – “Paul takes $30 million off the top of all of projects and the other $5 million goes to everything else. Please make sure you write that down.” He turns to face his costar. “Not cool, dude.”

“I’m totally worth it,” Rudd deadpans. 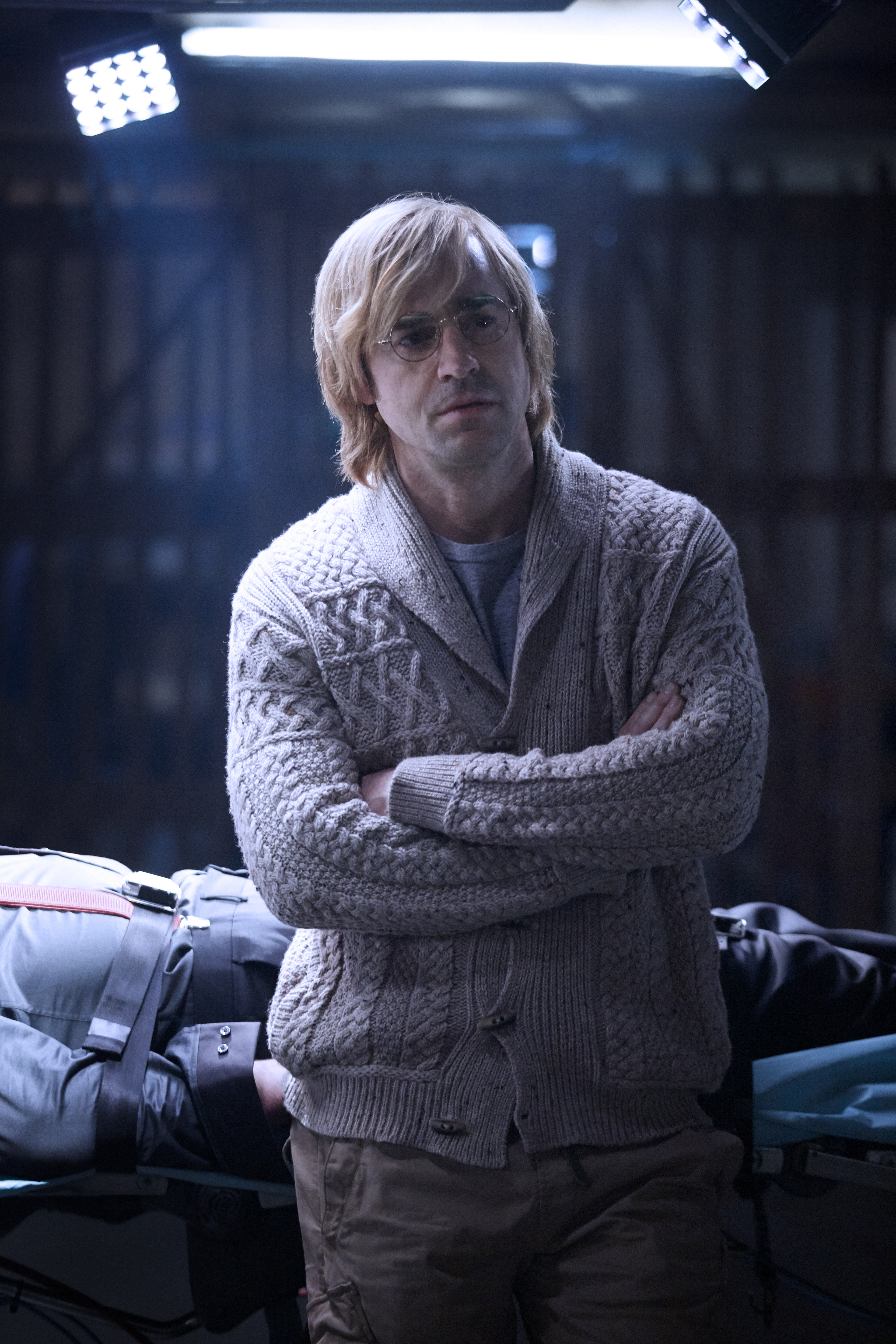 It’s the well-honed repartee these old friends bring to their oddball characters – who, it turns out, aren’t as peripheral to the plot as they initially seem – that adds a whole other dimension to this Raymond Chandler-meets-William-Gibson thriller. They two have only worked together a handful of times, most notably in David Wain’s 2012 comedy Wanderlust, where Theroux played a commune Casanova and Rudd spends an ungodly amount of time practicing hillbilly dirty talk. But they’ve known each other since the mid-1990s, when they “ran in the same circles, knew the same folks,” Theroux says. “When we finally met, we just sort of hit off right out of the gate.” Watching them in Mute, it’s apparent that these guys have a natural double-act screen chemistry that’s hard to fake. The second thing you pick up on is that they look like dead ringers for MASH‘s Trapper John and Hawkeye Pierce. Not the TV versions – the original countercultural pranksters played by Elliott Gould and Donald Sutherland in Robert Altman’s 1970 comedy.

Which is, according to everyone involved, anything but a coincidence. “The original MASH – it’s my absolute favorite comedy,” Jones admits, when reached over the phone. “The idea that these guys were based directly on Trapper and Hawkeye was always there, even in the script’s earliest incarnations. I mean, you have a protagonist who doesn’t speak at all – how do you balance that out? You give him two characters who can’t shut up. I knew the [parts] needed to be cast as a pair, because you had to get the sense that there was a long history between them. And Paul and Justin already had that.

“More importantly,” he adds, “if you go back to Altman’s movie and watch those guys, you realize: They’re kind of dicks. I mean, they’re not very nice people at all, yet I can’t help liking them, though. So what if you take that to the extreme and go: Well, what if these charming, carefree guys who are so witty turn out to be the villains of the film?” 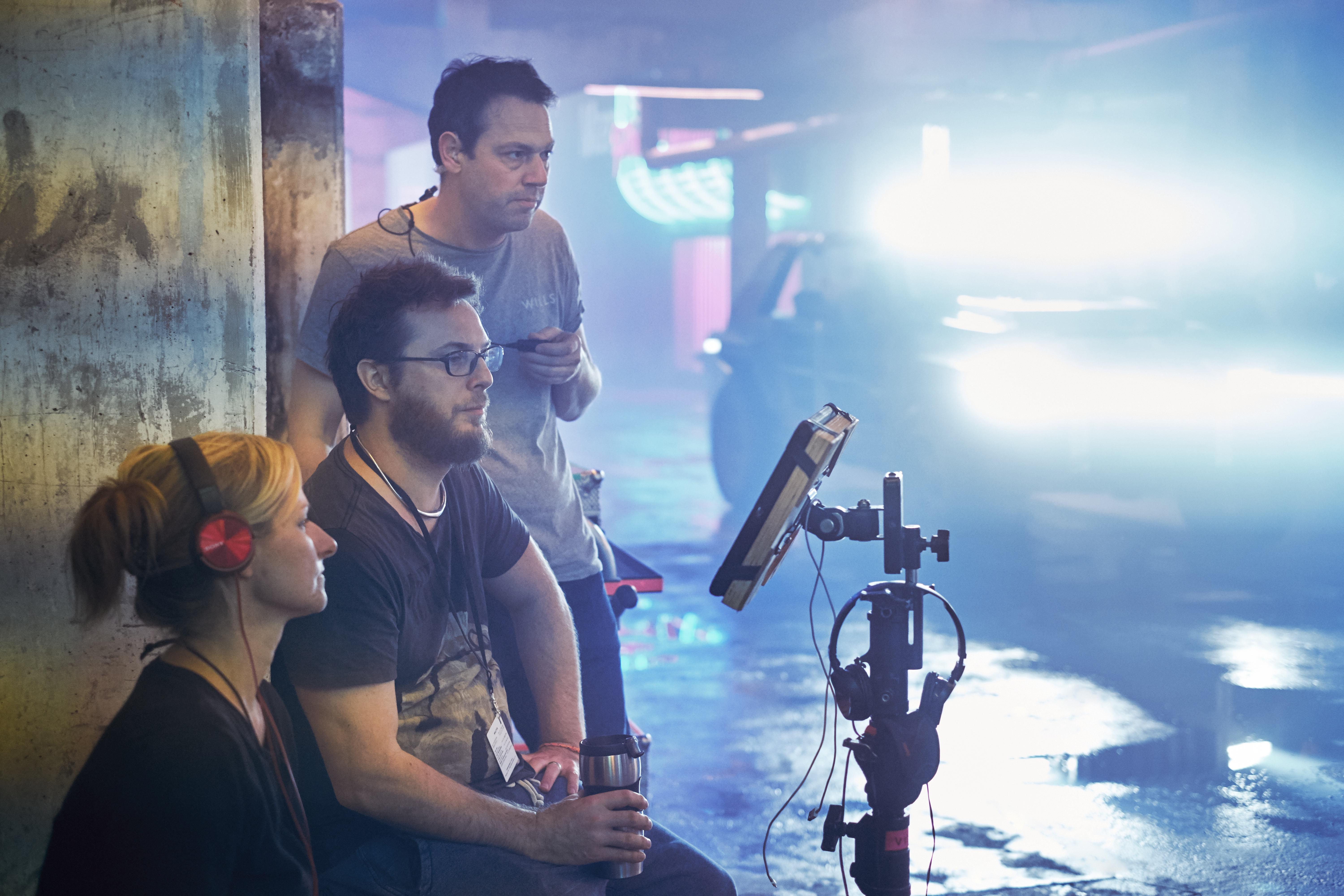 “Yeah, ‘Go watch MASH‘ – that was Duncan’s homework assignment to us,” Rudd admits. “We both immediately went, ‘Oh, I get it. Right, we can do this.’ I mean, they call each other ‘babe!’ It’s right out of the movie!”

“Still, it was pretty jarring to see Paul show up in full Seventies Elliot Gould wardrobe, with that mustache,” Theroux says. “I saw you and just yelled, ‘Holy shit!'”

“It was the same with your Sutherland wig,” Rudd adds.

“But we liked what Duncan was trying to do,” Theroux continues, “which was lull you in to a false sense of security. You see us done up as Trapper and Hawkeye, it’s, ‘I know these guys, these are the goofballs I like, they’re going to be the fun part of the movie!'”

Theroux: “…until they’re not. They clearly become less fun as the movie progresses.” He smiles. “From fun to fucking psychopathic.”

That, in short, is Mute’s ace in the hole: By the time the movie hits the midway point, you’ve already spent a good part of the movie inadvertently rooting for the bad guys. (What’s that maxim about Satan getting all the good lines in Paradise Lost?) At the risk of treading into slightly spoiler-ish territory, it’s safe to say that Rudd’s military doctor has a bad temper and a large knife that would put Crocodile Dundee to shame, and Theroux’s sleazy surgeon has an extremely unpleasant secret. “That was the big bump in the script,” the latter admits. “When I got to that part, I thought, ‘Well, that’s dark.’ It was not, shall we say, the easiest thing to play.”

And in one of Mute‘s smarter moves (and this is spoilery, so beware), the movie also reveals a direct connection to Jones’ 2009 sci-fi flick Moon, notably via a scene in which you quickly see various Sam Rockwells arguing with each other in a courtroom on TV. Both Rudd and Theroux are huge fans of the cerebral space-madness film; both say it’s the reason they wanted to work with Jones in the first place. “We were filming something on set,” Rudd says, “and Justin and I walked over to check on Rockwell, who was a few soundstages over. And there’s Sam and 50 empty chairs, he’s changing into all these different outfits and jumping from seat to seat, going ‘I have to film all of these bits today, guys, I’m so tired …'”

The longer you listen to these two guys joke with each other, the more you understand why Jones really needed both of them for those parts: It’s Rudd and Theroux’s second-nature, sentence-finishing bantering that grounds the story’s mix-and-match science fiction aspects. It’s easy to argue that, in many ways, the movie wouldn’t work without them and their particular understanding of each other’s rhythms – though they’re both quick to assign credit where it’s due. “The banter is in the script,” Theroux notes. “I can imagine, because of some of the comedies Paul and I have done, people think it’s all just improvised or something. But other than a line here or there in the surgery scenes, it’s all on the page. As it should be.”

“Plus what people forget is that improvisation isn’t about the joke,” Rudd says, “It should service the story. And you can tell when people have a script where it’s like, ‘We know this needs work, but hey, guys …”

“’This is where you zhoosh it up!’” Theroux chimes in.

“‘You guys just do your play-around thing'” Rudd continues. “And then it never works. Almost never.”

“It used to drive me crazy when you’d write something,” Theroux says, “where you work really hard on it, and then you go and do press and the actors are going, ‘Yeah, we just showed up and improvised the whole thing, nothin’ to it!’ And you’re like, hold on a second! I don’t think these incredibly taut, well-structured jokes just fell out of your mouth …”

“They’re conveniently forgetting that out of the 100 improvisations they tried, 99 of them didn’t work!” Rudd says. “People think Anchorman wasn’t scripted at all. Clearly, they have never met Adam McKay. That man is so hilarious it should be illegal.”

“Adam McKay is so hilarious he should do a biopic of Dick Cheney,” Theroux jokes, referring to the director’s upcoming not-at-all-a-comedy about the former Vice-President.

“They can release it straight to Crackle,” Theroux says. And then both of them burst into laughter one more time.