Edward Norton is fidgeting with the Western-style pearl snaps on his white collared shirt. You wouldn’t call it a tic — though nervous tics are one of many deeply researched subjects he’s able to wax about at a moment’s notice. It’s more like a subconscious tell that he’s about to say something he feels is very important.

And when Norton starts to get worked up about an issue, which is often — his reputation for intensity is well-earned — he has a habit of punctuating his statements with a passionate, percussive clicking and unclicking of the top button. America worships power and elevates bullies. Snap. Moviegoers are so used to getting fed the equivalent of high-fructose corn syrup that they can’t taste anymore. Snap. New York is the ultimate American melting-pot city, and look what happened to it in the Fifties when one man had unchecked power. SNAP.

The 50-year-old writer-director-actor is tucked into a plush leather booth at the Knickerbocker, a West Village restaurant that looks like it’s been time-warped out of the Eisenhower era: Al Hirschfeld sketches on the wall, Black Angus meatloaf on the menu, bartenders who definitely make a mean martini. Norton likes this place. It feels very Old New York, which is one of numerous personal obsessions — including political mechanisms, the power of the movies, and Robert Moses — that drove the star to spend nearly two decades bringing Motherless Brooklyn, Jonathan Lethem’s 1999 postmodern detective novel, to the screen. With the finished film finally hitting theaters on November 1st (with a cast featuring Norton, Bruce Willis, Gugu Mbatha-Raw, Willem Dafoe, Bobby Cannavale and Alec Baldwin), he’s waited a long time to sit in this monument to a bygone era and discuss his pet project in the past tense.

“I mean, it’s not like I haven’t been doing other things,” he adds, digging intently into an omelet. “I’d been making movies. I’d written scripts. But I kept coming back to this. There is a certain kind of just, like, discomfort I feel with not completing a thing.”

As Lethem’s stock was rising, Norton had been coming off an incredible hot streak, starting with a breakout role as a stuttering teenage altar boy in 1996’s Primal Fear and peaking with his portrayal of a neo-Nazi skinhead in American History X in 1998. Thanks to those roles, he’d already garnered two Oscar nominations before he’d turned 30. His immersive, Method-y approach to parts had people hailing him as the new Brando.

Norton knew Lethem’s early work, and they had friends in common; he remembers being tipped off by a mutual acquaintance that the writer was putting finishing touches on “this new thing about a Tourettic detective. They were like, ‘You need to check this out. You would really like this character.’ ” He reached out to Lethem and got a copy in galley form. He thought, “I know this character. This is right in my sweet spot.”

So when the folks at New Line Cinema asked him what he wanted to do now that he had the clout that comes with being an Academy Award-nominated movie star, Norton immediately mentioned the book. Only he didn’t just want to play Lionel; he also wanted to write the script. Maybe direct it, too. The studio purchased the rights. Suddenly, Norton had his next project.

Or rather, his “next” project: There were a few hurdles before Norton could get started. Like his schedule. “We were just starting to rehearse Fight Club,” he says. “I knew that was going to take over a year. I had a plan to direct Keeping the Faith. I knew it’d be a while before I could realistically get to it. But I already had an idea about what I wanted to do.”

“It’s not like I haven’t been doing other things. But I kept coming back to this. There is a certain kind of discomfort I feel with not completing a thing.”—Edward Norton

Norton loved the lead character, an “afflicted underdog” who played off the traditional Bogart-style detective. But the book took place in the present day, and the actor felt that trying to set a film version about a gumshoe — even one who blurted out obscene non sequiturs — in the Clinton era would risk sarcasm. “I told Jonathan that if you tried to do it in the Nineties on film, it could end up feeling like The Blues Brothers,” Norton says. “Like retro hipster satire. He agreed that irony was not the angle. There’s a Fifties gestalt to the book, so why not set the movie in that decade? He liked that a lot.”

Moving the story back into the past also allowed Norton to add a new, era-appropriate element. In Lethem’s novel, Lionel tangles with mobsters and a mysterious Japanese corporation; for the movie, however, Norton wanted to introduce a character named Moses Randolph, a bureaucratic bully who lords over New York’s urban-development departments. He’s a clear stand-in for Robert Moses, the “master builder” who transformed the landscape of the Big Apple and turned entire neighborhoods into racial ghettos. Norton had read Robert Caro’s book The Power Broker, and saw how it detailed a secret history of the city. The idea of making a Moses avatar the heavy in the story — of examining how, in Norton’s words, “from 1928 to 1968, New York was essentially run by Darth Vader” — appealed to him.

It also appealed to Lethem, who gave the OK to Norton’s radical revision of Motherless Brooklyn‘s storyline in early 2001. “I prefer it when movies aren’t the Classics Illustrated version of a book,” the author says. “I thought, ‘He’s going to make an interesting film out of this.’ And then I went through many years of thinking, ‘Oh, this isn’t going to happen, is it?’ It became part of the secret imaginary multiplex of movies based on my books that existed only in my head. ‘That 1950s Motherless Brooklyn Edward Norton thing … that would’ve been cool. Too bad about that.'”

Former New Line executive Toby Emmerich remembers when Norton, a longtime friend, first pitched the idea of a throwback Motherless Brooklyn right after the company bought the rights. He also remembers a September 2001 meeting at New Line president Bob Shaye’s house on Long Island where the three of them were swimming in the Atlantic Ocean and Shaye suddenly said, “ ’OK, Ed, what’s going on? It takes 12 weeks to write a script; it’s been a few years now, and we have other directors interested in the material.’ Edward said, ‘Give me until Christmas.’ Come December, we still didn’t have a script — but he turned in 25 or 30 pages, and it’s excellent. It was enough for us to say, ‘Keep writing.’ We figured he’d finish it up soon.” 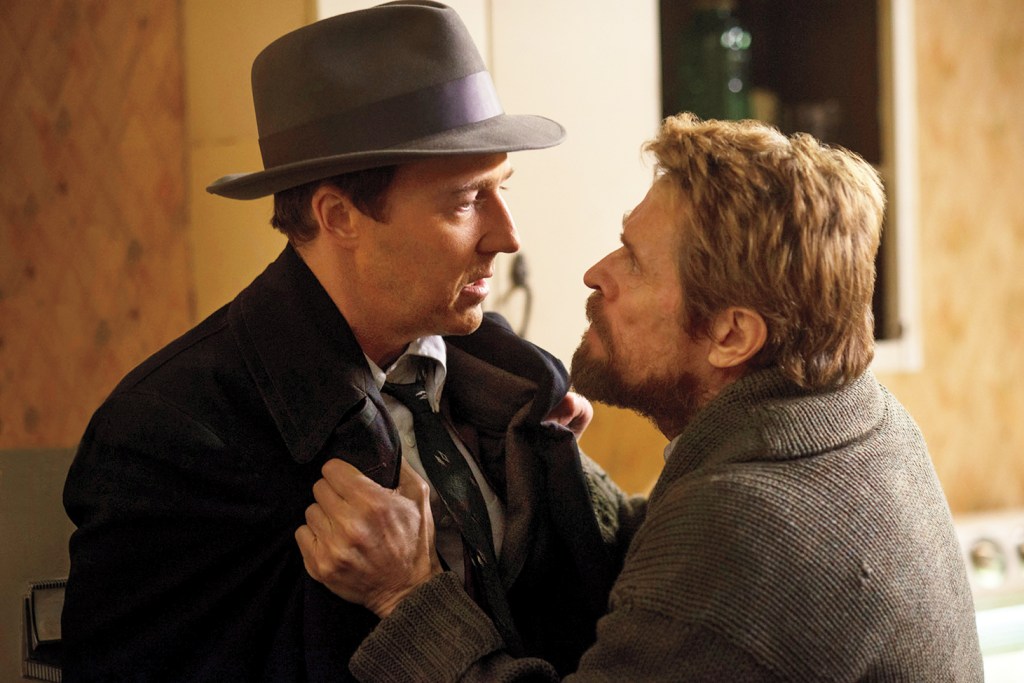 Except Norton found himself up against a key roadblock: namely, that he didn’t quite know how to solve the new mystery at the center of his revamped story. “Looking back, I think it took me a while to figure out how to deal with this complex history and make things murky but not too murky. All I know is, I got blocked for a while and kept picking it back up and putting it away.” Other acting gigs came his way. He wrote an entire miniseries about the Lewis and Clark expedition, which he still hopes to make. Talk of maybe doing Motherless as a streaming series came and went. When interviewers asked when he’d get around to making the film, he’d say, “Soon.”

In the meantime, Norton kept researching. He studied documentaries on Tourette’s, noting how each person manifested different symptoms. He remembered a cab driver he encountered a few times as a college student, who would uncontrollably yell the word “if.” He’d met a litigator in New York with Tourette’s who’d stretch his neck and jaw — at the Knickerbocker, Norton demonstrates the double tic, which he’d eventually borrow for Lionel — and made a note of it. “It’s so much more than just vocal outbursts of shit-fuck-piss,” he says.

Then, around 2012, he figured out what he calls “the mechanism of the mystery.” The dam burst, and he finished a draft that tied together all the strands of race, politics, power, and noirish thriller. Only he was a little worried that the story he wanted to tell — about the way the One Percent operate without accountability — felt out of sync with the moment. “Obama was being inaugurated for his second term,” Norton says. “A lot of the coastal cognoscenti believed we were entering this post-racial utopia with all of this other shit in the rearview mirror. Then the 2016 election happened.”

Suddenly, Norton found himself with a highly politicized David vs. Goliath tale that couldn’t have seemed more resonant. Emmerich, by then the chairman of Warner Bros., told him they could make it for the right price, so Norton figured out how to do period New York for under $26 million. And Emmerich was adamant that Norton direct it. “He didn’t need a ballast, the way some actor-directors do,” Emmerich says. “He’s his own tough critic, his own reality check. I always thought he’d make something singular, unique, and special. And I think he did.”

Though the production wasn’t without problems — a fire on one of the film’s sets in 2018 resulted in a fatality and pending lawsuits; Norton personally thanked the firefighter who lost his life during the incident at the film’s New York Film Festival screening — he was finally able to get his longstanding pet project made. (After Norton showed it to Lethem, the actor says, the author was “prostrate with happiness.”) “I think I needed two decades with it,” he says. “I don’t think that even 10 years ago I would have had the sense of how important something like empathy would be to our society. And the piece really is about empathy. It’s about how we’re all in this together.

“There’s a line in the film where someone asks Lionel, ‘What is with you?’ ” Norton says. “And he says, ‘Let’s just say that an unfinished puzzle makes my head hurt.’ That’s me. I share with him a certain fixation with things in that I can’t stop twisting the puzzle around in my head.

“It feels like an itch has finally stopped,” he adds. “I feel a sense of liberation. When I look at it, I think, ‘We set out to do what we wanted to do.’ ” Norton puts his hands down on the table. He’s finally stopped fidgeting.