Nearly 50 years ago, Mick Rock conducted one of his first photo sessions with former Pink Floyd frontman Syd Barrett. Within a couple of years, he was documenting the advent of glam rock, and shooting iconic portraits of David Bowie, Lou Reed and Iggy Pop – including the dynamic cover shots that graces Transformer and Raw Power LPs, respectively. Over the years, he’s shot Queen, Blondie, Mötley Crüe, the Sex Pistols, Snoop Dogg, the Yeah Yeah Yeahs and many others, as well as publishing several books that demonstrate why he has one of the sharpest viewfinders in music.

Now Rock has participated in a documentary about his life and career, Shot! The Psycho-Spiritual Mantra of Rock, which opens in theaters today. Directed by Barnaby Clay, who’s previously worked on shorts for Rihanna and TV on the Radio, the film tells the photographer’s life story in vivid detail, from the way LSD opened him up artistically to the stories behind some of his most recognizable portraits. Throughout, Rock tells stories about his famous muses – focusing heavily on Bowie and Reed, to whom he dedicated the film – and reveals how he struggled with personal demons, including drug abuse. (The film is structured around a near-death experience involving a nasty incident with cocaine and heart-bypass surgery.)

Here, Rock discusses what he likes – and doesn’t like – about seeing his own life flash before his eyes.

Why did you want to do this documentary?
I don’t know if I wanted to do it. But people, including the BBC, have been asking me to do a documentary for about 15 years. I’ve been off and on about making it, whether or not it was a big fucking mistake. Then I started thinking, “Nope. You’re too far in.”

How did director Barnaby Clay come aboard?
When I agreed to do this film, I got to choose the director. The fact that he’d never done a documentary was important to me. From what I’d seen of his work, I knew he had a real aesthetic sense, visually. He was a Londoner living in New York, with a taste of American women – because he’s married to Karen O, which was helpful, too. And he agreed we didn’t need talking heads. Why do you need other people’s opinions about somebody’s work? If you’re watching a film, you either like the work or you don’t.

The original agreement was that the doc should be two-thirds about the past and a third about the present. And then I thought there was just too much deathbed stuff. But I think what we produced is something original.

“One of the things David [Bowie] and I exchanged was
that Syd Barrett was a friend of mine – and that David had met Lou and
Iggy in New York. Imagine that conversation in 1972 between two guys in their early twenties.”

The doc focuses a lot on your drug use, including a series of photos you took of cocaine. Were you hesitant about including that?
I thought it was unnecessary. I just thought it was distracting. It’s like the Robert Mapplethorpe documentary – it concentrated too much on his sex life. I know it related to his work, but what I remember about the film is a phone call where he talks about getting fist-fucked the night before and how he preferred to do it rather than having it done to him. I thought, “OK, that’s interesting … but did I really need to know that?” It was all I could think about afterwards. Maybe that says something more about me than it does the film, but I think it took away from the work.

Did you learn any new insights about yourself from watching your life story?
No. I still don’t understand any of it, and it was kind of chaotic the way it ambled forward. It’s not a linear thing because my life hasn’t been linear. The only constant for me has been the yoga that I did and that LSD was very important. And you could say I was very lucky that my first subject was my friend Syd Barrett. But how did the rest of it happen? I clearly had some organic intuitive thing, because a lot of the people I took pictures of were not so well known when I shot them.

Do you feel you’ve established a certain look?
It would be foolish to try to analyze it. I’ve never analyzed my photographs. I have a process – an inner process – and I can’t explain it. It looks to me like there’s a bit of high drama at times; I think it’s just that I have an attitude and an obsessive thing. I come out of rock & roll; you can’t have just one style. I’m not a fashion photographer. Even if you look at my Kate Moss pictures, they’re not shot like regular fashion pictures – nor did I intend them that way. 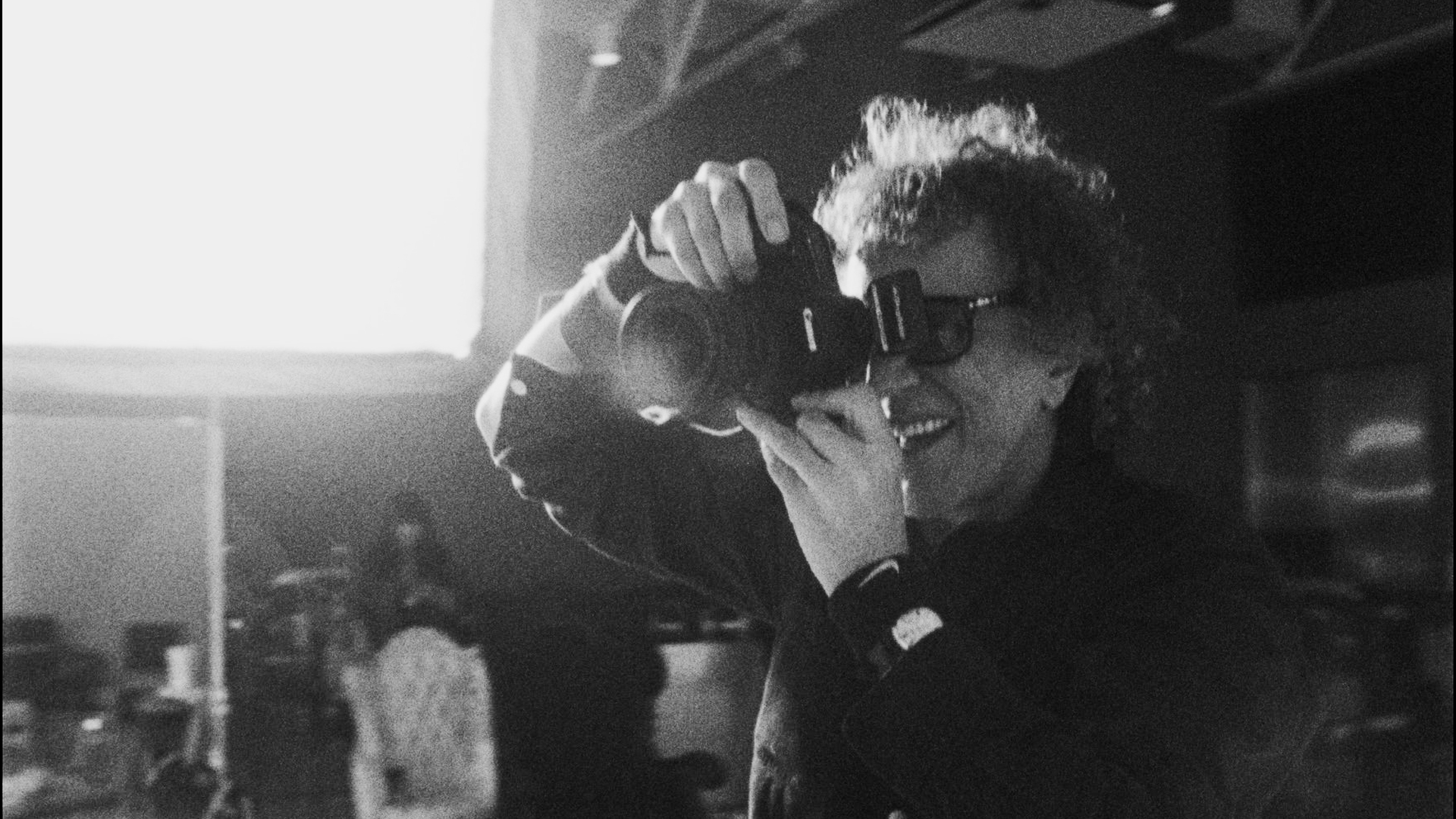 You dedicated the movie to “the timeless genius of David Bowie and Lou Reed.” What about them made you want to do that?
They made an important contribution to the development of my own sensibility. Obviously, I’d shot Barrett probably two-and-a-half years before I ever met David, but I do think that [David and Lou] were also good people. When I was having trouble, they both helped me out financially. They bought my prints. When I was in the hospital for my heart bypass surgery, the first flowers that were there waiting for me were from Lou and David. Not only were they my true friends, they were also my true heroes. My admiration for their work is strong.

What about David made him a good photo subject?
You just couldn’t take a bad picture of David. I didn’t know much about him when I met him. One of the two things David and I exchanged in our first interview was that Syd Barrett was a friend of mine and that David had met Lou and Iggy in New York when he’d gone over to sign an album deal with RCA. So we had those three people in common. Imagine that conversation in 1972 between two guys in their early twenties.

What do you think about how these days anyone with an iPhone thinks they’re Mick Rock?
I love it. Yes, it’s easy for me to take a picture, and I can shoot without thinking too hard about it. I like the modern world, and I like the things you can do with Photoshop. I’ve been able to use it to resurrect some of my early Syd Barrett pictures that looked thin and dark because they just sat around for so many years.

Everyone is a great photographer. In fact, I’ve seen some pictures that my wife and daughter have taken that are so good I tell them that we need to credit me on them – so they’ll be worth more money [laughs].