Ask most folks what the most iconic thing about Los Angeles is, and they’ll say the Hollywood sign, Grauman’s Chinese Theater, the Walk of Fame stars, maybe the Capitol Records building. Ask Damien Chazelle, the director behind the modern-day City of Angels romance La La Land (which opens in theaters on December 9th), and he will answer, without missing a beat: “Freeway gridlock. Anyone who’s lived there will tell you that.” Sitting in a hotel room far from home last September, a little over a week after his movie premiered in Venice and the day after it’s knocked everyone sideways at the Toronto International Film Festival, the 31-year-old filmmaker says he even misses the stress-inducing traffic a bit. “I loved the idea that if you were writing a love letter to L.A., you’d take the single most annoying thing about it, the one thing you mock the most – and prove that even that can be the site for a musical number.”

The number Chazelle is describing, which kicks off his story of an Angeleno jazz pianist (Ryan Gosling) and an aspiring actor (Emma Stone) falling head over heels for each other is not just any set piece. Rather, it’s a delirious five-minute sequence that involved shutting down an active freeway off-ramp for two days, hundreds of dancers hoofing and singing their hearts out on top of color-coded cars, and an extraordinary amount of co-ordination to make it seem as if it’s all happening in one seamless, smooth-as-hell single shot. (Chazelle admits that there are two “invisible edits” that you can catch if you’re especially eagle-eyed.) It’s the first of many exhilarating sequences that make viewers feel as if they’ve time-warped back to an era when musicals were the epitome of American studio filmmaking, and the only one in the genre’s history that ends with two A-list stars flipping each other the bird. “I mean, how else do you begin a musical in this day and age?” he asks, laughing.

An even better question: How do you even make a musical now, much less convince two marquee-name actors to to take a chance on it and have it turn into an unexpected Oscar frontrunner? Both Chazelle and his longtime friend/collaborator, composer Justin Hurwitz, had been toying with the idea of doing this kind of throwback-with-a-twist type of film since the two met at Harvard and started a band together in their freshman year. They had bonded over their mutual love of old-school MGM-style showstoppers and the sort of revisionist takes on the genre that French directors like Jacques Demy had done in the Sixities, and after they made their first movie, the lo-fi black-and-white 2009 musical Guy and Madeline on a Park Bench, they began discussing the possibility of doing a full-blown song-and-dance extravaganza.

“We kept asking ourselves: Is there a way to take those musicals we loved, but kind of make them make them relevant,” Chazelle says. “And not just modernize it, but humanize it … to get actors who you normally don’t associate with this kind of stuff, and make you feel like all this fancy stuff on screen is being done by people.”

After college, Chazelle moved to Los Angeles in 2011, where he pitched the idea around and, for the most part, was told he was nuts (“The ‘original musical’ part was definitely not a cha-ching aspect for producers,” he jokes.) Hurwitz kept making music, including a few early stabs at future La La Land tunes, and did the occasional TV writing gig for The Simpsons episode and The League. 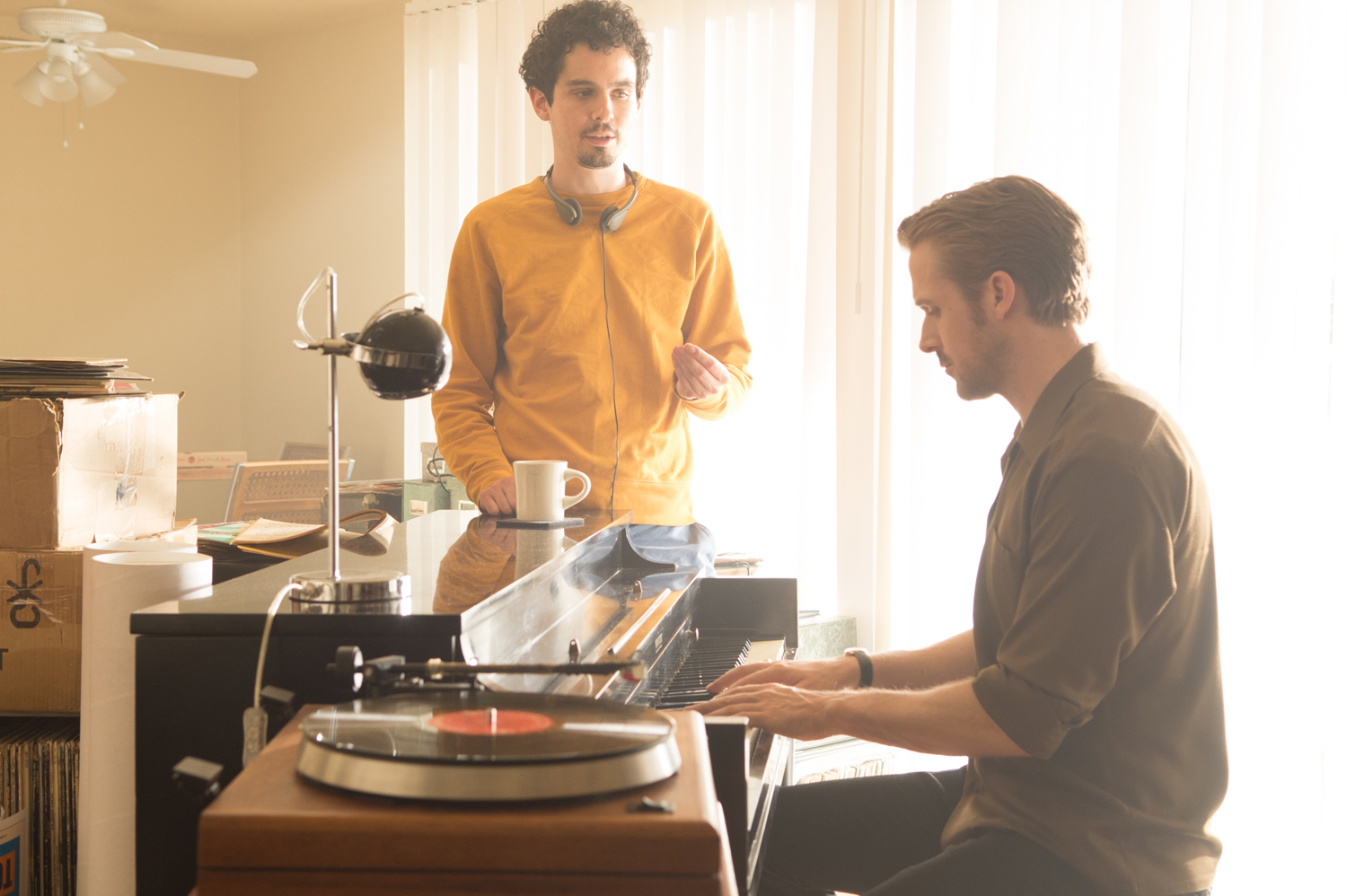 And then came Chazelle’s 2014 drumming drama Whiplash, which made him an Academy-Award nominee and an unexpected hot property. If there was ever a time for the gents to make their Technicolor dream project, it was now. “I had a little bit of capital,” Chazelle claims, “and then I maxed it all out.” While he started hammering out a treatment, Hurwitz began simultaneously writing a score and songs that would complement the idea of two lovers trying to make it in showbiz.

“He had some big set pieces in mind already,” Hurwitz says, citing the freeway opening, a magical dance scene at Griffith Observatory and the breathtaking fantasy montage that ends the film as being key elements from the get-go. “So the first thing I came up with an instrumental we called ‘Mia and Sebastian’s Theme,’ which we knew had to carry a lot of those sequences. Then it was just me making piano demo after piano demo for Damien, until we come across the right melody.” The composer takes a deep breath. “I made over 1,900 demos for this movie. We throw out lots of material. It’s ‘No, no, no, maybe; no, no, no, no!’ Eventually we get to ‘no, no … oh my god, I love that!’ Then we starting working on finding a verse and a chorus, and after that, we give the music to our lyricists Benj Pasek and Justin Paul” – the songwriting duo behind the current Broadway sensation Dear Evan Hansen, and who are having quite a moment – “and then I’d make MIDI mock-up orchestrations.” Songs like “Audition (The Fools Who Dream)” came “fairly quickly”; the deceptively minimal-sounding, Chet Baker-ish “City of Stars” was “one of those that went through many demos. And I do mean many.“

As songs started to come together, Chazelle kept writing script drafts and refining his idea for the story as the music pointed things in different directions. He claims, somewhat sheepishly, that “Ryan and Emma were in the back of my head when I was writing, even way back when.” While working his way through the awards-season circuit, he met Gosling, who apparently told Chazelle he “had been wanting to do a kind of Gene Kelly-ish thing”; Stone had just come off doing Cabaret on Broadway, and met the director shortly thereafter. “It was at a diner,” the actress says, via email, about their first encounter. “We both had chicken-pot pie. He told me about La La Land before I’d even read the script; he seemed funny, passionate as hell, incredibly sweet … and about 16 years old.” Chazelle later found out that she and Gosling had been talking independently about the project for a bit. Soon, the Drive star was taking piano lessons, and both were getting crash courses on how to get in touch with their inner Ginger and Fred.

And while the two stars weren’t asked to jump and leap over vehicles in that opening off-ramp number (asked about the sequence, Stone says it was wonderful because “I got to witness it all happening from the comfort of my Prius”), they were required to convincingly pull off several numbers that showed off some impressively fleet-footed chops, including a stylized park-bench pas de deux at dusk and that aforementioned Griffith Observatory set piece, in which the two appear to float up into the cosmos. “That sequence was fun because we were on wires,” Stone says, “and I felt like I had a real leg up on account of my Spider-Man past. So I mainly remember spinning and flipping around a lot while Damien rolled his eyes.” For Chazelle, the toughest thing to film wasn’t one of the elaborate dances, but a long scene right past the movie’s midpoint where the couple engages in a knock-down, drag-out fight over dinner. “It’s an extended six-to-seven minute conversation that’s completely on the actors,” he claims. “It’s literally the point where the music stops for them. We rehearsed that more than anything else, I think.”

Asked whether he thinks La La Land could convince audiences to once again embrace the idea of people spontaneously breaking into song on screen – especially in films that weren’t Broadway adaptations or animated Disney features – Chazelle thinks for a second before theatrically crossing his fingers. Whether or not his ambitious attempt to pay tribute to the movies he and Hurwitz admire so much connect with a audience that doesn’t binge on TCM programming, he admits, is slightly out of his hands; he simply hopes he might change the minds of a few naysayers who outright dismiss the form. “I would tell someone [what] I was doing and they’d go ‘I love Singin’ in the Rain, but I hate musicals,'” Chazelle says, cracking up. “We were conscious that the form had fallen into traps that we wanted to avoid. So we made a musical for those folks who wouldn’t be caught dead at a musical.”