'It's Reality TV': Jonathan Glazer on His Nightmarish Short 'The Fall' - Rolling Stone
×
×

There was a man with a noose around his neck. It wasn’t clear who he was, or who the men were that had been chasing him before they strung him up, or why they were after him. Jonathan Glazer was not privy to the details. In fact, the British filmmaker behind countless legendary music videos (Radiohead’s “Karma Police,” Jamiroquai’s “Virtual Insanity”) and movies like Sexy Beast could not even tell you why the scenario had lodged in his head. It might have sprung from something he was writing, he admits. Or maybe a sentence or two he’d come across in an article he’d read ages ago.

All Glazer knew was that the sight of someone being hounded and hanged had somehow wormed itself into his brain for a long, long time. Specifically, there were two images that had embedded themselves deep in his subconscious. One was a tree being shaken, as seen from far away. And the other was someone falling from a gallows and never, ever stopping.

The Otherworldy Charms of Scarlett Johansson

Both of these visuals appear in The Fall, Glazer’s seven-minute short, and the first film he’s made since 2013’s space oddity extraordinaire, Under the Skin. Both will almost certainly take up permanent residence in your skull as well, whether you’d like them to or not. A free-form dystopian travelogue that plays like Kafka filtered through Cronenberg, it follows a masked mob who pounce upon another masked man in the forest. After a quick group selfie with their prey, the faceless crowd lynch him. The camera slowly tracks toward a rope that endlessly unspools into what appears to be a cavernous hole. Eventually, we see the victim quietly, methodically trying to climb back out of the hole he’s fallen into. A mere description of what happens, however, can’t do justice to the sensation of watching this brief yowl from the abyss. Like the best poetry and your worst nightmares, Glazer’s short has a way of channeling a mood that defies logic or reason. (A24 is releasing the short online; you can see it here.)

“I remember speaking to a friend of mine in London, and telling him, ‘If I have to talk to anybody about this film, I don’t really want to say anything,’ ” Glazer says, in a rare phone interview. “And he replied, ‘Well, just tell people that it’s reality TV.’ Which, I think, is fairly accurate. It’s what we’re seeing every day, whether we care to acknowledge it or not.”

The Fall started with a request from Rose Garnett, the head of BBC Films, for Glazer to make a short film. There were no rules or parameters, the director says; he had free reign to turn in whatever came to mind. “It was more of a general commission,” Glazer recalls. “And it was quite paralyzing, to be honest. Having someone just say, make whatever you want to make . . . I mean, I do that when I make feature films, but usually I have a long time to think about things, suss through ideas and really immerse myself in it. I didn’t have that here.

“So it really did come down to: What am I feeling right now? What’s going on the world?” he continues. He thought of the inscription that a friend had written on the front page of a Brecht anthology she had given him, taken from one of his poems: “In dark times, will there be singing?/Yes, there will be singing about dark times.” He thought about a Goya painting called “The Sleep of Reason Produces Monsters,” in which a figure is surrounded by predators, and a picture he’d seen recently of Eric and Donald Trump Jr. posing with a kill while on a hunting trip. (This was the inspiration, he told The Guardian, for the selfie shot.) And then those two aforementioned images, which had been floating around his head for years and, he says, started to present themselves once again.

“I hadn’t thought about them for a long time,” he notes. “It was almost like they surfaced at that moment; some ideas, you just can’t get rid of them or shift them. And they suddenly tied into this sense I had where we’re living in times when reason is under attack and aggressive ideas seem to be in the ascendancy. So I wanted to use this as an opportunity to express that notion, in the hopes that someone else out there was feeling the exact same thing I was.” 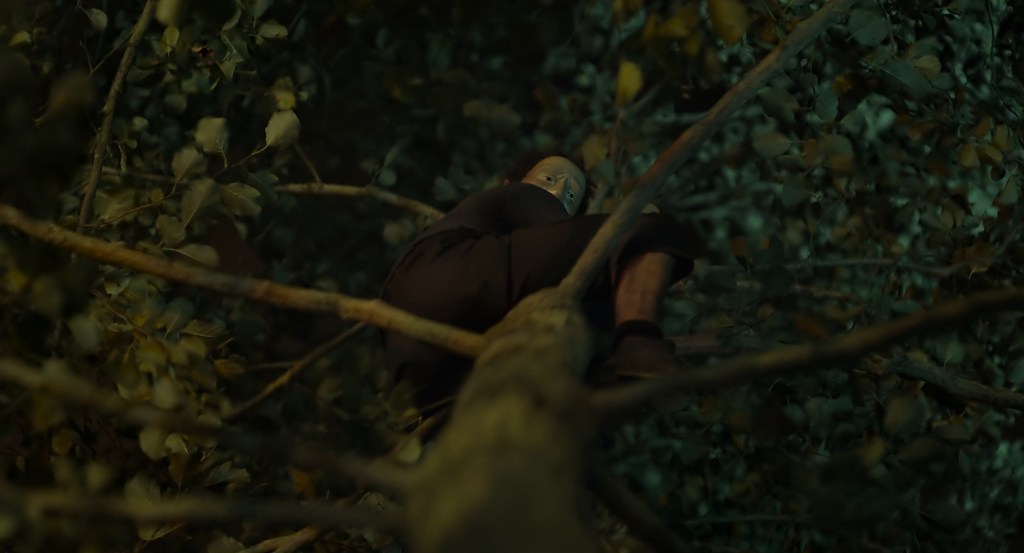 If nothing else, The Fall concisely taps into the sort of communal, free-floating dread and anxiety of the current moment, in which the concept of the center being unable to hold and sheer anarchy being loosened upon the world feels like it’s constantly one Twitter-troll rant away. The masks, based on two models of Japanese Noh theater masks, were used as a shorthand for the anonymity that, Glazer says, “is such a major part of our culture, with online comments and disinformation, all of that . . . I thought the mask was a way of expressing how comfortable we can be when we’re anonymous. How comfortable, and how awful.” Mica Levi’s score, which he praises as “a perfect racket,” turns a consistent ticking into a background chatter of pure unease. And then there is the concept of a downward spiral that just seems to keep going and going and going, without a bottom in sight. You can tell it’s a Glazer work by the look and feel of it, though the closest thing you might compare it to is Picasso’s “Guernica,” if that portrait of despair had inexplicably sprung to life.

“Funny you mention ‘Guernica,’ ” Glazer says, “because I have a very vivid memory of when I first saw that painting. I didn’t know what it was about, I did not know where Guernica was — it wasn’t like I came to it with any sort of intellectual history, or knew the subject or themes of it. But I felt it. And it’s kind of what I was going for here. It’s not an intellectual film; it’s much more of something from the gut. It’s almost like something invisible to the eye. And the images are sort of the scaffolding around the feeling. That feeling is what we’re trying to get to.

“Someone asked me recently if we’re any closer to hell these days,” he says. “The only answer I could come up with was, ‘We’re no closer to hell than we are to heaven.’ And the film is really about that.”

It’s part of the reason, he says, why he’s reluctant to talk about The Fall at all — he didn’t particularly want to do any press behind it, and still thinks that “my interpretation isn’t going to help anyone else’s.” (He’s also hesitant to say much about his next feature, which he confirmed will shoot in the spring, and won’t confirm that, as has been reported, is an adaptation of Martin Amis’ book The Zone of Interest. “It’s so far from any sort of source material that I just . . . I can’t . . . I can’t talk about it yet.”) And it’s part of the reason why, when he turned the end result in to Garnett, Glazer suggested they just present it without introduction or explanation. The first screening of The Fall happened at 10 p.m. on a Sunday night on the BBC, slotted between a documentary and a televised talent showcase. To say that most viewers were not prepared for seven minutes in hell would be putting it mildly.

“You’re sitting at home watching television, and something comes that you haven’t expected, you haven’t sought out,” Glazer says. “But there it is, this thing that’s in absolute contrast to what you thought you were watching. There’s something very strong about being in people’s living rooms that way, and I thought that simply dropping this unannounced was our best bet. To be disruptive I suppose. I think the BBC got a lot of complaints — ‘What the hell was I watching? Here I was, sitting down to watch a nice program at 10 o’clock in the evening, and then this thing comes on! What were you thinking?!’ I’m sure that’s what happened — and that’s how it should be.

“It’s actually very simple and parable-like,” he adds. “You know, my brother rang me up and said, ‘Saw your short on television the other night.’ ‘Oh really, what did you think?’ ‘Well, a man’s up a tree, he gets shaken out of it, gets hung, falls down a hole and climbs back up. Have I missed anything?’ Glazer lets out a low, dry laugh. “And I said, ‘No, that’s pretty much it.’ Break it down by what happens, and it’s basic. Trying to explain the sensation you’re left with . . .” He trails off.

The filmmaker will, however, mention that viewers may want key in to the short’s long, cryptic final shot. “Someone asked me recently if we’re any closer to hell these days. The only answer I could come up with was, ‘We’re no closer to hell than we are to heaven.’ And the film is really about that as well. It’s up to us which direction we go. It’s within our power. It’s our choice as to how we want to live and how we want to be represented.”