All Jon Bernthal wanted to do as a young actor when he arrived in New York was get a job on The Sopranos. He wrote letters to the casting department, begged his agents constantly to get him an audition. “And I never got one,” he laments.

Still, the very existence of The Sopranos made much of Bernthal’s career possible. The HBO series’ success inspired an explosion of darker dramas on cable and streaming, many of which — including, notably, The Walking Dead and The Punisher — needed just the intense, brooding screen presence Bernthal can deliver. And now, things have come full circle, with the actor cast to play Johnny Boy, father to Michael Gandolfini’s young Tony Soprano, in The Many Saints of Newark, a prequel film set in the late Sixties and early Seventies (premiering October 1st).

“In the beginning, when I was fighting tooth and nail for every part, I just wanted to be involved in that show in any way,” Bernthal recalls. “I remember looking at the people in the deep background and wanting to be that person so bad. One of the best parts of doing the film was that I got to go through the series again. It was not only so fun to dive into what I think is the best show of all time, but to get to know [Sopranos creator and Many Saints writer] David Chase. He had encyclopedic, Shakespearean insight into all these characters — their histories existed in his heart. You can absolutely trace things in this movie [back] through the series. It staggered me going back and seeing the seeds that were planted. It’s just other-level shit.”

Earlier this summer, Bernthal spoke with Rolling Stone about following in his idol James Gandolfini’s footsteps, the bond he formed with Jim’s son Michael, his work rescuing pit bulls, and more. 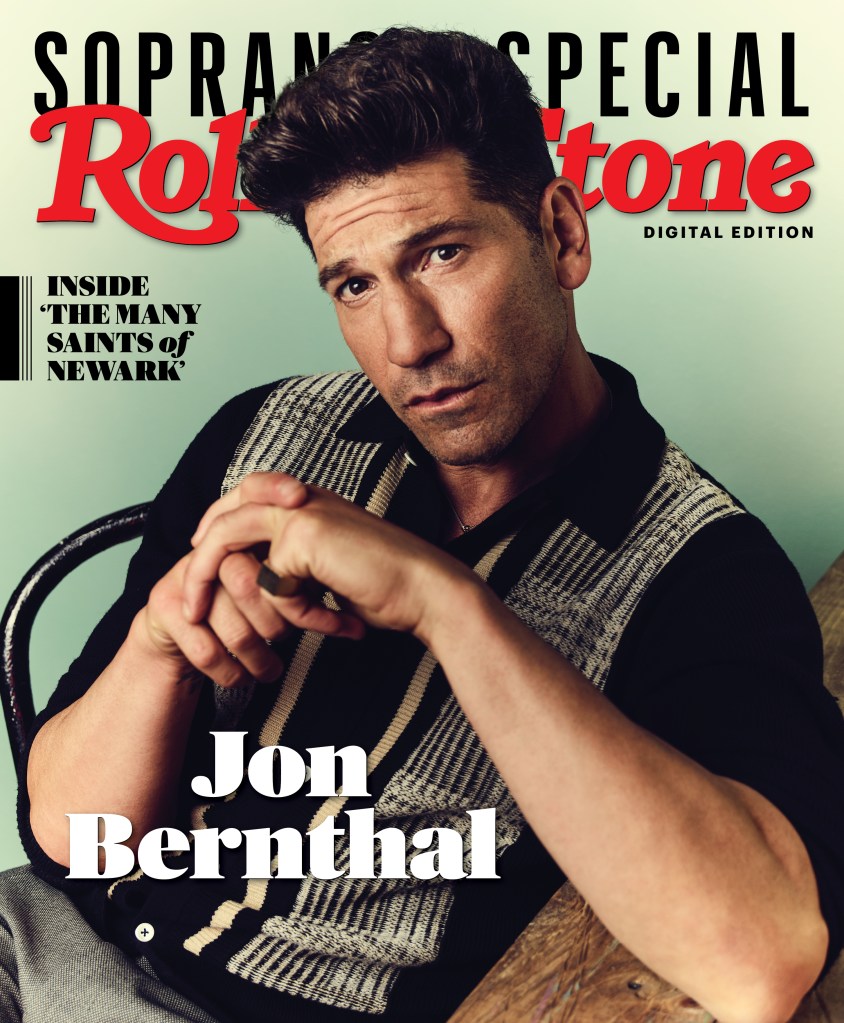 Jon Bernthal photographed by Joe Pugliese for Rolling Stone. Produced by Walaa Elsiddig and Shelby Gordon. Grooming by Kim Verbeck for The Wall Group. Styled by Stephanie Tricola for Honey Artists. Polo by King and Tuckfield. Pants by Kilton.

When you were watching the show back in the day, did you think much about Johnny Boy as a character?
I did not. The show centered so deeply on the relationship [Tony] had with his mom. But, I think, when you start to examine [Tony’s sister] Janice, and why Livia is the way that she is.… Going back and looking at the show through the lens that I had this time, I saw how omnipresent [Johnny Boy] was.

Vera Farmiga and Corey Stoll have all this old footage to study for their performances as Livia and Uncle Junior. Johnny Boy appears only briefly in a few flashbacks in the series so you don’t have much to draw on, but you’re also not going to draw as many comparisons. Was this good or bad for your purposes?
I don’t know if you can look at it as good or bad. It’s just different. I get a lot more freedom with what I get to do; there’s going to be a lot less scrutiny. But then again, when I saw what Corey was doing, and when I saw what Vera was doing, it’s a really interesting challenge. It’s not mimicry — it’s “What would this character have been like at this time earlier, before these key events in their life happened?” What Vera did in this movie, it was astonishing. And such a joy to be a part of. More than anything else, what Mikey went through, what Michael Gandolfini had as the task at hand, both as an actor and as a young man, was such a beautiful thing to behold. I have to be honest: For me, that’s my big takeaway from this experience. I’m so enamored with this young man. I love him so much.

How did Michael impress you?
When I met him, he was on this journey of trying to get to know his father in this more intimate way. He grew up with Tony Soprano as his dad in New York. [Having been] in New York at the time, it’s unimaginable to me. He was on a mission that I thought was so mature and so emotionally courageous, where he was traveling the country and talking to old friends of his dad, and acting coaches, and people who had played a part in [Jim’s] life, and [dealing] with this unbelievable loss he had suffered. Then to make the decision to compete for this part that his father played, to go play that part and keep Tony Soprano in the Gandolfini family, was such a beautiful, awesome thing. I was so thrilled that I could be a father figure going through it. At the end of the process, he gave me this beautiful gift, something that belonged to his dad. And you’ve got to understand that for me, when I saw [James] Gandolfini in True Romance, I saw something in him that I aspired to, that made me say, “This guy’s on a different level.” There’s so much nuance and detail to every moment he’s onscreen. To have this connection to him now — not just from the movie or the part I play, but through the fact that his son is now in my heart? I consider myself super grateful.

What was the gift he gave you from his father?
He gave me a watch that his dad used to wear, that is one of my most treasured items — not just because it belonged to my hero, but because Mikey gave it to me. I really looked at the bond between fathers and sons. I’m a dad, I’m extremely close with my dad, and I think that there’s sometimes these fractured lines. Sometimes, it’s prison, sometimes it’s death, sometimes it’s the inability to articulate emotion, but every father loves the shit out of his son, and it’s always there. Whether they know how to express it or not, it’s always there. 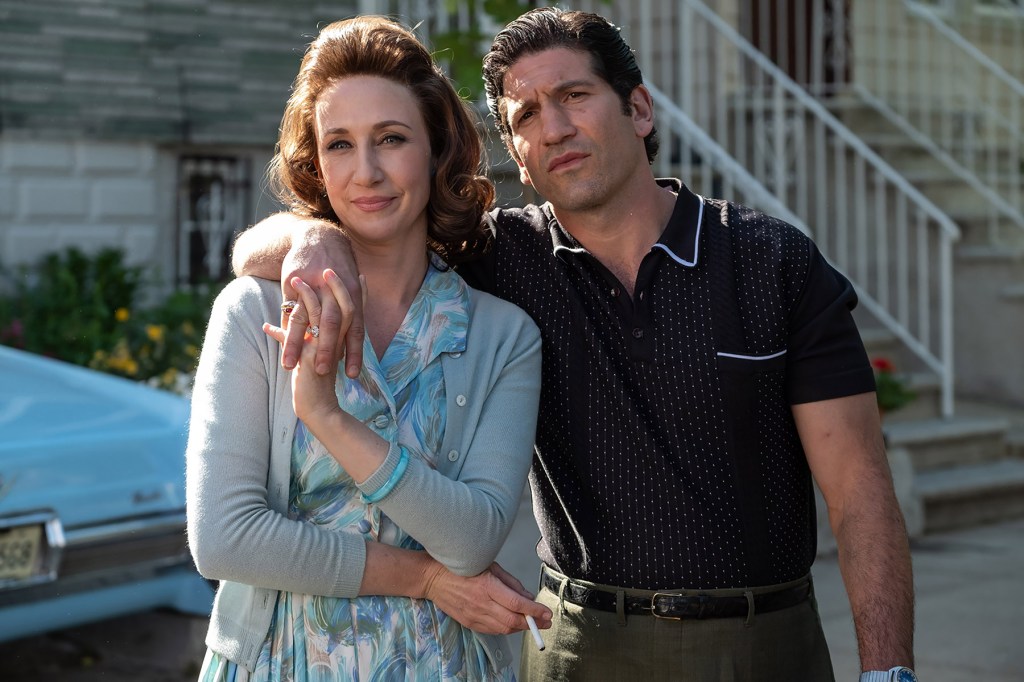 Vera Farmiga with Bernthal in ‘The Many Saints of Newark’

It sounds like there was a degree of protectiveness from the whole cast toward Michael.
I’m always kind of that way with people. Sometimes, you need to conjure enemies: “Well, it’s us against them.” That’s kind of my thing. But protecting his performance was most important to me. That’s exactly what I think a father would do.

In an early episode of The Sopranos, Tony’s telling Dr. Melfi about his father and says that Livia “wore him down to a little nub.” He’s definitely not there yet, but there’s a sense throughout your performance that Johnny’s just over it, with both his wife and at times with the Mob. How would you characterize both of those relationships at this stage of the story?
So much of what’s steeped in Sopranos DNA is guilt, shame, expectation, and the trappings that your family and your culture puts you in. There’s expectations to behave a certain way, and then there’s the residual shame and guilt that encompasses you. Those are the things I wanted to focus on. Johnny Boy is going forward in ways he’s always gone forward. But none of these behaviors are actually making him happy. And he’s filled with guilt in the choices he’s making. If you notice, [in the film] he’s always leaving. He’s either just coming from somewhere and saying he wants to be somewhere else, or he’s on his way out. He’s never in a place where he wants to be. He can’t stand being in his own skin. And look, everybody likes him, everybody respects him, but that’s something that I really took from the show: Tony had that element in him.

How conscious were all of you in the Many Saints cast about the legacy of the show and the expectations that Sopranos fans will have for this?
How can you not be conscious of that? But I think you’ve got to separate them. I think Sopranos fans will really dig this. Seeing these beloved characters as young people will be satisfying for them. That being said, this is a very specific story about a very specific time, and in a much different world than the TV show. And you can’t really compare the two mediums. Those are impossible shoes to fill — and I don’t think you attempt to fill them. What you can say is that hopefully we’re in the same shoe store, you know?

You’ve worked on a lot of shows that probably would not have existed if not for The Sopranos.
I’ve been enormously blessed in my television career to play these dark antihero characters. I’ve been able to do things on camera where I’ve been able to really turn my back on the audience and say, “I don’t care if you follow me or not, I don’t care if you’re with me or not. So long as I’m emotionally honest, you’ll come back to me, or not.” Jim, he was able to be so ugly and so cruel and so vicious, and any line that was drawn, he was so willing to cross it. It elevated the art form [of] television performance, and acting, period. I don’t mean to sound too grandiose, but when Stanislavski went on a world tour and had the actors literally turn their backs on the audience, I think it set off a revolution in acting, and it created James Dean and Marlon Brando and Robert De Niro. What Gandoflini did for television was exactly that. All of these incredible characters that have got to come forward since then, we all have to be in complete gratitude for David Chase, and for that bold performance that Jim laid down.

When the Many Saints cast came back together for the Rolling Stone digital-cover shoot, you brought one of your dogs with you, and everyone was smitten.
Bam Bam’s my little right-hand man. My dad used to be the chairman of the board of the Humane Society of the United States. Shutting down fighting kennels and rescuing pit bulls has always been a real passion of mine. Pit bulls are the most misunderstood breed. I’ve seen what the power of love and belief and opportunity can do for children, and I think it’s the same for animals. I want my dogs to be ambassadors. I love it when people tell me, “I’m afraid of pit bulls,” and then I can bring my dogs over and say, you know, “My dog will like you to death.” It is possible to win people over and get them to open their hearts to that breed.

Well, you’re often cast as sort of these tough, scary guys, but there’s also a sweeter and funnier side to you. Do you see something of yourself in these dogs?
I think, if you look at anybody who has a dog long enough, you see how connected they are, whether it’s on purpose or it just works out that way. You see the yappy dogs, and then the owner never quits talking. I do fundamentally believe that there’s no such thing in life as good guys and bad guys. Everybody’s got trauma. Everybody’s doing the best they can. The biggest and most missing element of masculinity right now is empathy. We have a masculinity crisis in this country, where people think it’s all about acting tough and being loud and being rigid and unbending. And I think being empathetic and open and emotional, that’s what being a man is about.

In This Article: The Many Saints of Newark, The Sopranos