As Occupy protests spread in the fall of 2011, rattling elites and offering a brief, tantalizing vision of grassroots uprising, the most uncompromising and confrontational arm of the would-be revolution was in Oakland. At its center was Boots Riley, the longtime radical activist and frontman of the hip-hop group the Coup. While covering Occupy, I accompanied Riley to a foreclosed Fannie Mae house that had been taken over by squatters from the youth-led Tactical Action Committee and watched as he addressed the crowd during a march that shut down the Port of Oakland, sabotaging an estimated $4 million in business. To his slight chagrin, Riley had become a prominent face in a leaderless movement; with his prodigious Afro and mutton-chop sideburns, he could have been repping his hometown circa 1967, when the paint was still drying on the Black Panther Party’s headquarters.

Sundance 2018: 'Sorry to Bother You,' 'Tyrel' Rip on Race, Toxic Masculinity and Us

Over lunch that week, Riley mentioned that he’d been working on a screenplay. “A dark comedy with magical realism inspired by my time as a telemarketer,” he said. Riley, who had done theater in high school, was planning to play the lead, although he was concerned about upsetting the careful balance of art and activism he’d struck in his music career. “I’m already somewhat known, so of course the cameras come to me,” Riley said. “But that kind of makes Occupy look smaller than it is. It’s this weird thing where increasing my celebrity hurts what I’m doing here.”

Seven years later, that film, Sorry to Bother You, is one of 2018’s buzziest indie movies, with Atlanta’s Lakeith Stanfield starring and Riley in the unlikely role of 47-year-old debut filmmaker. The title tips off the setting – a dreary telemarketing cubicle farm – but doesn’t begin to hint at what Riley has in mind. After setting up his audience for a familiar workplace comedy in the vein of Office Space, he proceeds to madly derail all expectations, producing, instead, a surreal racial satire and pointed capitalist critique with startling plot turns that veer toward dystopian science fiction. It’s formally eccentric, politically charged and very, very funny.

Fans of Riley’s past work won’t be surprised. “Presto! Read the Communist Manifesto!” went the first line on the Coup’s 1993 debut, Kill My Landlord. By the end of that verse, he’d referenced Che Guevara, Mao Tse Tung, the Ghanaian revolutionary Kwame Nkrumah and George H.W. Bush’s racist Haiti policy. By the next verse, “won’t get no callouses” was rhyming with “‘Cause I’m spitting dialectical analysis.” The music sounded as if George Clinton’s Mothership had beamed up a Marxist study group; the secret weapon was Riley’s humor and self-awareness.

He brought a similar philosophy to Sorry to Bother You. Stanfield – who, as the philosophical stoner Darius in Atlanta, manages to steal every one of his scenes in slow-motion – stars as Cassius, a broke, underachieving depressive who lives in his uncle’s garage and tries the patience of his performance-artist girlfriend (Tessa Thompson) by obsessing over existential conundrums such as the fact that one day the sun will explode. When he lands the telemarketing job, his cubicle neighbor, Langston (Danny Glover), teaches him to channel his “white voice” in order to win over customers on his call list. We expect Glover to pay homage to the old Richard Pryor bit and begin talking through his nose, but in one of the film’s first surrealistic touches, the jarring sound of a voice that sounds uncannily like Steve Buscemi’s emerges from Glover’s mouth instead, in the manner of a crudely dubbed kung-fu movie. (The voice actually came from a temp engineer on set that day.) Cassius soon masters the technique (he’s voiced by David Cross), and as his star begins to rise in the company, things only get weirder. 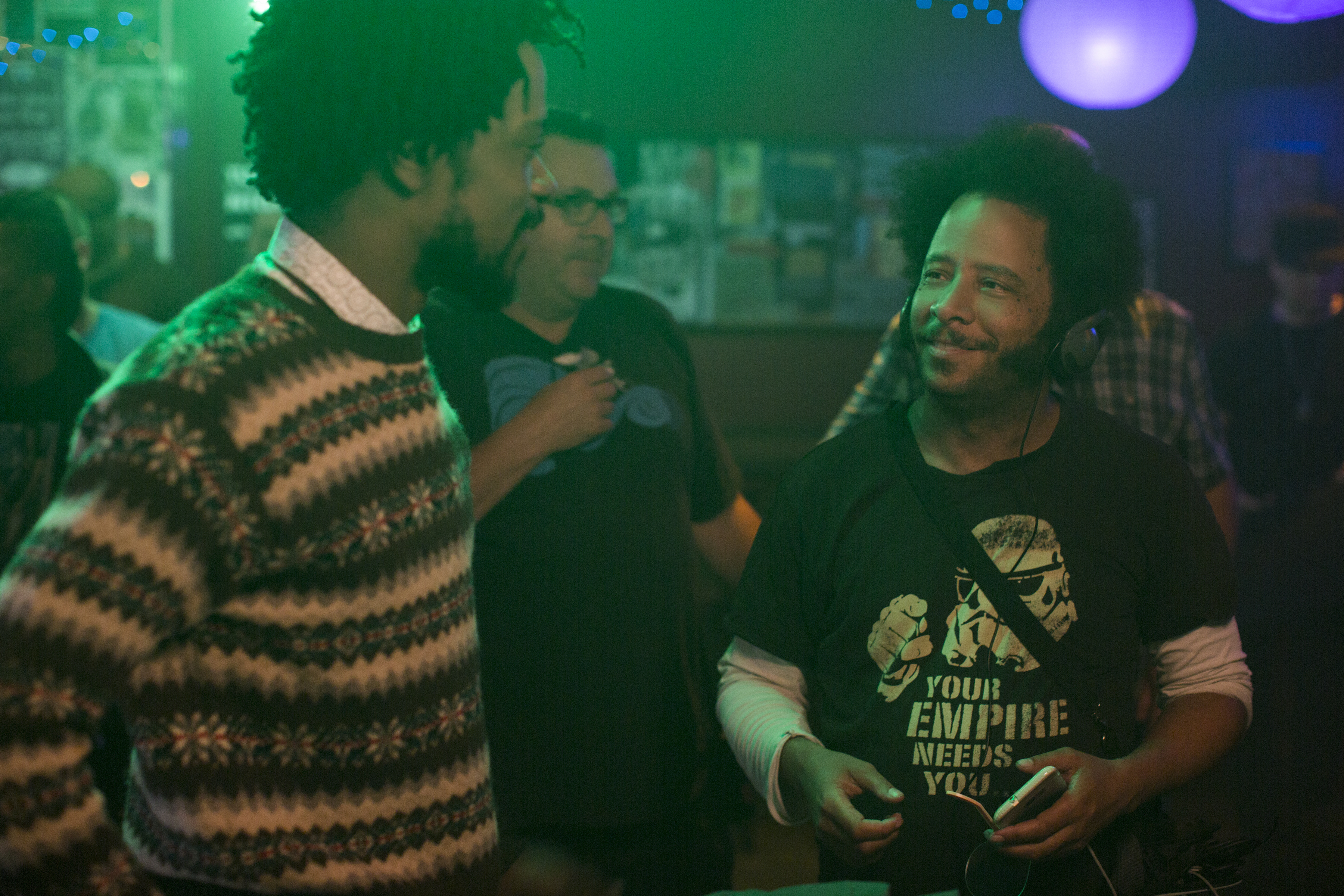 “When I started working on the script,” Riley tells me, “I was like, ‘OK, I’m going to write a one-location thing that we can make for $30,000. And I will lie and tell the record label that we’re going to spend all that on music videos, and make a movie with it instead.’ ”

It’s a balmy spring night in Manhattan’s Chinatown, and Riley has arrived at an outdoor cafe looking more or less unchanged from the Occupy days: kente-cloth shirt, blue blazer, olive cargo pants, white sneakers, over-ear headphones. Same hair. He was born in Chicago, but his parents, who met during a student-led strike at San Francisco State University, returned to the Bay Area when he was six. By high school, he was helping organize farmworkers in California’s Central Valley. As an undergrad at San Francisco State, he studied film, hoping to be the next Spike Lee; instead, the music he wrote for his Super 8 shorts ended up becoming demos for the Coup. Released as an EP in 1991, these songs caught the attention of the hip-hop label Wild Pitch, and soon Riley’s dreams of filmmaking had been sidetracked by a record deal.

From the beginning, Riley had a habit of upending genre conventions. At the height of ’90s West Coast gangsta rap, the Coup tweaked one of Snoop Dogg’s biggest hits, releasing an album called Genocide & Juice. And on the great early single “Not Yet Free,” Riley complicates the macho posturing not only of hip-hop but of certain strains of revolutionary politics – including the Panthers’ – with the line, “I got a mirror in my pocket and I practice looking hard.” Gunshot sound effects ring out at the end of the song, not as a commodification of violence, but as a backdrop to a series of mock-political assassinations.

“Fats Cats, Bigga Fish,” a single from Genocide & Juice, began getting radio play, but after EMI bought Wild Pitch, Riley says the new label management quickly lost interest. “Fuck,” he recalls thinking. “I am putting myself in a position where I have no control over anything.” So, in an even more heretical swipe at the success-oriented ethos of mainstream hip-hop, he quit. Riley spent the next couple of years working as a telemarketer. “I was so good at it, I could just work one day every two weeks,” he says. The rest of his time went to the Young Comrades, a community organizing group he’d co-founded.

Riley revived the Coup in the late Nineties, having decided music offered him a larger platform to spread his ideas, only to run into one of the worst cases of timing in show-business history: Their album Party Music, originally set for a September 2001 release, featured an edited cover image of Riley holding a guitar tuner like a detonator as the Twin Towers exploded behind him. (The cover, which Riley said at the time was “a metaphor for destroying capitalism,” was swiftly withdrawn.)

Riley had given up on getting his script for Sorry to Bother You produced when he ran into the novelist Dave Eggers on the street in 2014. They’d never met, but Eggers recognized Riley from the Coup, and he ended up releasing the screenplay through his book-publishing house. Hollywood noticed: Jordan Peele and Donald Glover both expressed interest in starring, but were sidetracked by, respectively, Get Out and Solo. Riley was admitted to the prestigious Sundance Institute Screenwriters Lab, and eventually decided to direct Sorry to Bother You himself.

Shot mostly in Oakland in 2017 – 61 locations in 28 days – the movie has an appealing handmade quality, reminiscent of early Spike Lee joints and dark satires like Hal Ashby’s The Landlord and Robert Downey Sr.’s Putney Swope. Perhaps as karmic payback for the 9/11 image debacle, with this project, Riley’s timing couldn’t be better. “There’s this zeitgeist happening, and people are more open to Sorry to Bother You being a hit with Get Out being out there,” he says. “But that zeitgeist is also happening because of the movements going back to Occupy and Black Lives Matter. Usually, film is years behind. It just so happens that this time, everything is lining up.”

The promising early response to Sorry to Bother You has already landed Riley a television
development deal; it’s also led to the first Coup album in six years, The Sun Exploding, due out as the film’s soundtrack this summer. Citing a recent survey commissioned by a right-wing think
tank that found 44 percent of millennials would prefer to live in a socialist
country, Riley chuckles. “If the film industry doesn’t put my politics in
there, even just on an opportunistic level? They’re missing out.”