Tonya Harding is still best known as the woman who maybe, possibly, potentially played a part – for the record, she denies it – in her figure-skating rival Nancy Kerrigan getting hit in the knee just before the 1994 Olympics. Margot Robbie knows this – the Australian actress spent months studying the sad backstory of Harding’s life in preparation for the biopic I, Tonya, and she was well aware of what the public’s opinion on the disgraced athlete was. But the more Robbie dug, the more she developed sympathy for the fallen champion. When it came to finally meet her subject face to face, Robbie was a little worried about how the former tabloid fixture was doing. What happened next shocked her.

'I, Tonya': What You Need to Know About Tonya Harding and Nancy Kerrigan

'I, Tonya' Review: Tonya Harding Biopic Is the Movie We Need Right Now

By the time Harding was 23, she was America’s villain, a sensation for all the wrong reasons and an easy go-to punchline. But I, Tonya, directed by Craig Gillespie, recasts her story as a darkly comedic fable, one that challenges the nasty narrative that has followed the skater for years. It charts her rise to figure-skating record-breaker and the personal turmoil leading up to “the incident” by employing a Rashomon-like structure, where Tonya (Robbie) and her former husband Jeff Gillooly (Sebastian Stan) give their “wildly contradictory” accounts of what happened. The result is funny, yes, but also heartbreaking as it graphically depicts the abuse Harding says she endured at the hands of Gillooly – who pled guilty in the attack and implicated his ex-wife – and her mother, LaVona Golden (Allison Janney). “I wanted people to feel guilty,” Gillespie says. “I wanted you to come into the movie being judgmental … and then have that perspective change.”

An opening title card reveals that what’s to come is based on actual interviews with Harding and Gillooly – a credit to screenwriter Steven Rogers, who managed to infiltrate both of their lives when he was pursuing the project as a spec script. In his separate conversations with the pair, he found their perspectives differed to such a degree that Rogers simply decided to let them speak for themselves, directly addressing the audience and letting their conflicting versions of events jockeying for screen time. The brashness of that script got the attention of Robbie, who had been looking for female-driven pieces to produce with her company LuckyChap Entertainment.

At that point, the Australian wasn’t familiar with Harding’s story, or that the most ridiculous plot points – like Kerrigan assailant Shane Stant crashing into a locked glass door – were drawn straight from real life. “I thought, ‘Wow, this writer is, like, crazy creative coming up with all this bizarre stuff,” Robbie says. “I love that he’s written it in a style as if it’s like a mockumentary version of like [in air quotes] ‘a true’ story.” Upon learning that all of the more outrageous aspects were 100-percent real, she found it “mind-boggling and enthralling” – and immediately wanted in. “There were a lot of scary elements: Real life people who are still very much alive, dealing with domestic violence, a very specific tone [that] few directors could pull off. So to pick the right filmmaker was going to be huge,” Robbie says, citing why she also signed on as a producer: “I just wasn’t prepared to let all of those things just be left up to someone else’s decision. I was like, ‘I’m sorry, but I’ll need a say in this.'” 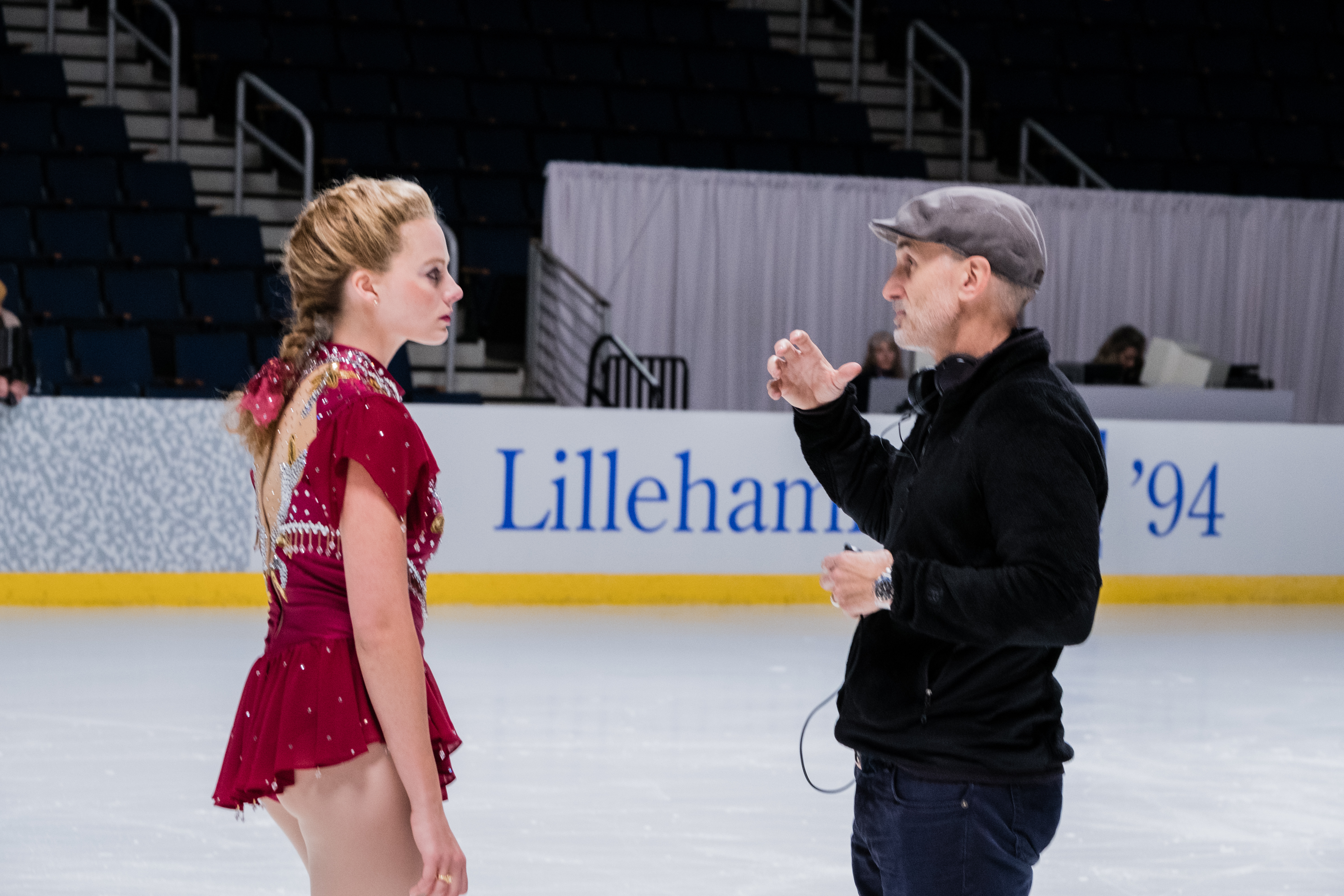 To actually play Tonya – who ages 29 years over the course of the film – required multiple types of physical transformation for the Suicide Squad star. First and foremost, Robbie underwent rigorous skating instruction with choreographer Sarah Kawahara, who, in a bizarre coincidence, has previously worked with Kerrigan. “I felt like I lived at the ice skating rink,” Robbie says. “Every time my alarm would go off at like 5 a.m. I’d be like, ‘I can’t do it again today, I’m still so bruised from yesterday.'” Ahead of filming, Gillespie choreographed the performance sequences so Robbie and the two professional skaters on hand could work on them. Most of the routines replicated on screen were based on Harding’s real programs – like when she becomes the first American woman to do a triple axel in competition during the 1991 national championships. There was one that the director did dream up one on his own, however: A number set to ZZ Top’s “Sleeping Bag” (a song Harding did actually use) that he sees as a mashup of “all the things that were unique to Tonya,” quirks which displeased the conservative judges she was up against. (Cue: Hair thrashing.)

While the indepent production couldn’t afford extensive prosthetics, the makeup team used other tricks to embody Tonya’s “spirit,” like purchasing cheap products that could have been found during the period. Robbie then went about adjusting her posture. “We deal with a lot of class issues and the scrutiny from the media,” she says. “I wanted it to feel like the world was bearing down on her … I wanted her shoulders rounded, her head to be stooped. I wanted her to always be on the defense – and whenever she was sitting to be sitting forward, waiting for validation, like she was waiting for a skating score.” And, of course, Robbie studied hard: “I watched for about six months every single thing, every bit of skating, every bit of interview, every documentary, I played it my iPod at night … I had her face, like, painted on the inside of my eyelids and her voice just constantly in my head.”

The result is a portrait of a woman who is both coarse and confident while still being perpetually treated with disdain. Robbie says the last thing she wanted was to be exploitative, but that she also didn’t want to shy away from showing Tonya as a victim of violence. In fact, one of the first questions the actress posed to Gillespie in their initial meeting was how he was going to handle the abuse. “When she first asked me I said, ‘I think we can’t shy away from it,'” he says. “‘I think it has to be brutal because it informs us on who she is as a person and why she made those choices.’ So, I really didn’t want to soften it because I felt like … how hard her life was, and the way that she sees world – it’s because of violence being so front and center in her world. The hard part was, how do you switch between that and then go into humor in a different scene?”

Tonya’s fraught relationships with Gillooly and Golden LaVona (played by Janney as a foul-mouthed chain-smoking monster) take centerstage in I, Tonya. Her interactions with Kerrigan, however, are relegated to a brief aside – something Robbie was thankful for that and says was intentional. “There’s nothing I hate more than reading a script where two women are pitted against each other,” she says. “There’s nothing that I hate more than reading an article where they are trying to find a scandal out of nothing and make it seem like there’s only room for one women to be on top – so they better hate each other.”

That she’s still seeing those kinds of tropes in material speaks to how little has actually changed since Kerrigan was branded “Snow White on blades” and Harding a “surly ice witch,” per a Los Angeles Times report from the era. But after more than 20 years as the villain, the latter may finally be getting reevaluated as an “independent strong woman,” per Gillespie – someone who bucked convention and was punished for that. For Robbie, whatever you think of Harding, she just hopes I, Tonya just makes audiences takes a look beyond the tabloid headlines and view the skater as a human being.

“Everyone wanted to sum [her] up and put her into these neat little soundbites and splashy headlines,” she says. “And we still do that today. But it’s just not that simple.”