When Asia Argento released Scarlet Diva back in 2000, she didn’t think anyone would recognize the rotund Hollywood producer who tries to rape the main character, Anna Battista, as a character based on a real-life movie mogul. But it didn’t take long for others to figure it out. “I was asked many times, ‘Is that Harvey Weinstein?'” she says, speaking by phone from her home in Italy. “I thought this had happened only to me. The cream, the massage, the room, the tricks – I didn’t know this was Weinstein’s modus operandi.”

The daughter of Italian horror director Dario Argento and actress Daria Nicolodi, Asia began acting as a child and appeared in more than a dozen movies by her 21st birthday. Scarlet Diva was Argento’s first effort as a writer-director, a low-budget romp through a year in the life of an Italian starlet (and self-described “whore”) as she travels from Rome to Paris to Los Angeles. Her screen counterpart, Anna, is trying to establish herself as a serious filmmaker; she accidentally becomes pregnant by an Australian rock star in the process. The film combined drug sequences, horror tropes and semi-pornographic scenes to illustrate the way a young, famous woman is both entranced by and torn apart by her own sexuality.

Following poor reviews, Scarlet Diva became a cult favorite, but popular interest in the film rose last October when Argento came forward as part of Ronan Farrow’s first Weinstein exposé in The New Yorker. In the article, she accused Weinstein of sexually assaulting her at the Cannes Film Festival in 1997, and discussed how people would ask her if the Scarlet Diva scene was based on the Miramax founder. Now, as the former industry bigwig faces multiple international criminal charges and civil suits, the film is being rereleased in a limited run (starting May 11th) at Alamo Drafthouse theaters across the country.

Argento wrote the script for Scarlet Diva shortly after the incident. “After my rape, I started developing PTSD,” she says. “I couldn’t leave the house, and that’s why I had to start writing.” She couldn’t shake Weinstein – he continued to contact her, she told Farrow, and offered expensive gifts. So while writing the scene, Argento changed one key thing: In real life, she’s said that “the monster,” as she calls him, pushed her onto the hotel bed and forcibly performed oral sex on her. But in the film, Anna escapes, chased down a hall by the producer – naked but for his cowboy boots – immediately telling her friend how he said, “I wanna eat your fur pie.”

“I wanted to tell a bit of truth about show business,” she says. “And to forge it, to manipulate it, so that hopefully I could learn to live with it. I changed it [to be] that I ran away, because I didn’t want to be that person who was so petrified that I couldn’t fight back.”

When Scarlet Diva was released in Europe, Argento says she was “vilified” by the Italian public. “They were like, ‘Oh, you’re so self-obsessed,'” she says. “‘Oh, you play the victim. You say everybody wants to fuck you.'” But she pushed through the criticism and continued to work.

In 2002, after appearing opposite Vin Diesel in XXX (resulting in a press blast in the United States, including a turn on the cover of this magazine), Scarlet Diva began gaining attention overseas. It was then, she says, that Weinstein once again got in touch with her, apparently recognizing himself in the film. “That’s the moment he came back into my life,” she says. “He was like, ‘Please, trust me. I am so sorry this has happened. Let me be your friend.’ I didn’t put it together that it was because of the movie coming out, and he was shaking in his boots.” 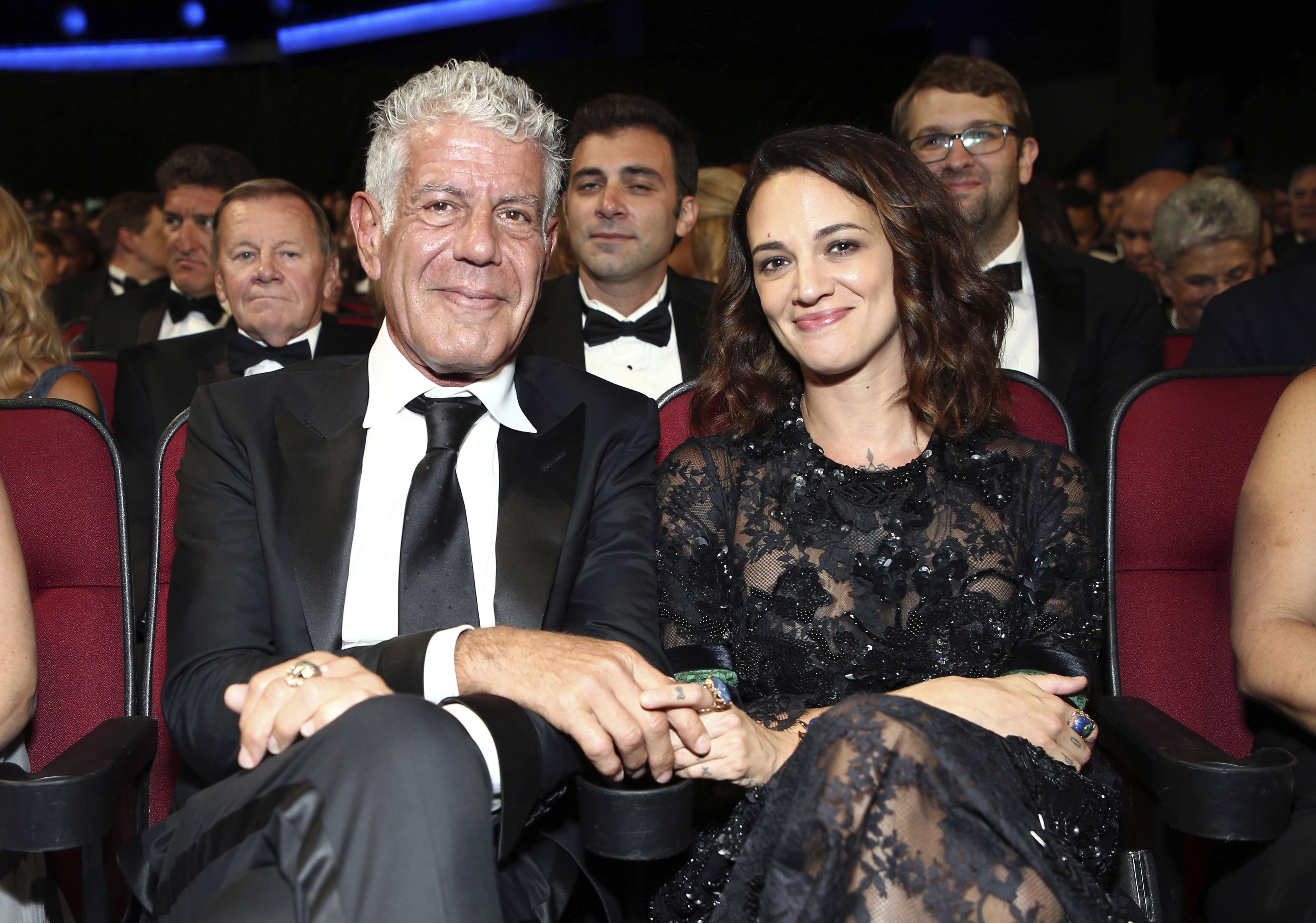 One night last fall, Argento was at her home near Rome, pacing around her room, mulling the question of whether to use her name in Farrow’s New Yorker story. She’d been discussing it for some time with her boyfriend, the chef and TV personality Anthony Bourdain, and her mother. “They were like, ‘Are you sure?'” she says. “I was like, ‘Yeah, maybe not.'” But that night, after putting her son to bed, she decided to take the risk. “I’ll remember this moment forever,” she says. “[There was] a voice inside of me that was the truth, it was the light. Like a spiritual moment. Like, ‘How are you gonna live with yourself when you know there’s other women out there? I have nothing to lose. I’m not the A-List. I don’t give a shit. I’m a punk. I’m an anarchist. I always do what the fuck I’ve wanted.'”

Without contacting anyone – not even a lawyer – she went with it. “I called Ronan and said, ‘OK, I’m going on the record,'” she says. They talked at length about her experience at Cannes, and also about what happened in the years that followed. As she explained to Farrow that night, Argento and Weinstein ended up having several sexual encounters over the next five years. She said that while it wasn’t exactly “assault,” she felt pressured into those situations; given Weinstein’s power, she felt she wasn’t in a position to say no. “I was never the girlfriend,” she says now. “I never woke up next to him. I never had breakfast. It wasn’t like that. It was not consensual sex.”

“When I made Scarlet Diva, I thought it was just me alone. To find out that this had happened to many other women by the same predator … this was the only healing thing.”

But after the article came out, she says, many read Farrow’s story to mean that she was Weinstein’s lover. She was once again condemned in Italy, called a slut and a prostitute. “Since the story came out, I’ve been retraumatized,” she says. “I feel mortified.” She considered reaching out to the magazine to ask them to clarify, but decided against it. “There were so many women coming out, that I had to take a step back, because I admire them greatly. I can’t say, ‘I’m gonna ask David Remnick from The New Yorker, “Can you please write an article to explain this five years?”‘ I don’t hold a grudge [against Farrow] because I truly, truly love him for what he’s done, and still doing.”

Yet the venom with which the public came after her has left her terrified. “It tells you how one phrase of somebody trying to do something good can ruin your life,” she says. “I had to sue 15 people that here, in Italy, were saying I’m a prostitute every day for months on TV, on the first page of newspapers. ‘I wanted it. I asked for it. I went to the room. Everybody knows she’s a whore.’ Look, I have many friends [who are] sex workers. If I was a prostitute, if I had ever taken any money for my sexual service, I would say it. No problem. [But] I never took anything from him.”

Despite the backlash, becoming part of the #MeToo movement has been cathartic. “When I made Scarlet Diva, I thought it was just me alone,” she says. “Not the article coming out, not making the movie – to find out that this had happened to many other women by the same predator, this was the only healing thing.”

These days, Argento rarely leaves the house. She’s still fearful of the ex-Mossad agents who Weinstein had hired to dig up dirt on his accusers in a failed effort to stop his eventual reckoning. “I’m afraid to leave my apartment,” she says. “I am still afraid. I am more afraid now that I know everything that they had on me, Rose [McGowan], Rosanna [Arquette], Annabella [Sciorra], all the women he had hurt. He knew who they were. But most importantly, now we know who they are.”

Of course, just because one predator has been stopped, doesn’t mean that the industry is safe. Take, for example, Cannes – the festival where she says she was assaulted by Weinstein. She has some good memories from there – she’s been going since she was 16, and two films she directed have been official selections. But she scoffs at the news that, this year, they have adopted the slogan “Correct Behaviour Required” and established a sexual-assault hotline for attendees.

“I don’t think putting ‘Don’t Rape Women’ on the gift bags is going to stop a predator,” Argento says. “Cannes has been a hunting ground for this since the festival started. It’s Dante-esque, the horrors that are behind this sense of glamour. This idea of glamour and perfection. If you scratch the surface, underneath is a Bosch painting of the most hallucinatingly scary apocalypse.” Yet she’s cautiously pessimistic, allowing that she’s going to see how the festival – currently in full swing – handles it this year. “We’ll see what they’ll do or what they’ll say,” she says. “If it’s gonna be some rose-water, washed-out shit like the Oscars or the Golden Globes or if anybody’s gonna stand up and speak the truth.” (A representative for Cannes was not able to provide comment by press time.)

For real change in the industry, Argento sees only one solution: “Having more women in power,” she says. “We live in this position of submission. The hierarchy will crush us. No matter how we try to stand up for each other, the men still have the power. And I don’t think that, genetically, men are made to give us this power. We have to take it. You know, it’s the revolution. It cannot be done with empty words and gestures. It’s taking this to heart and doing the work every day.” 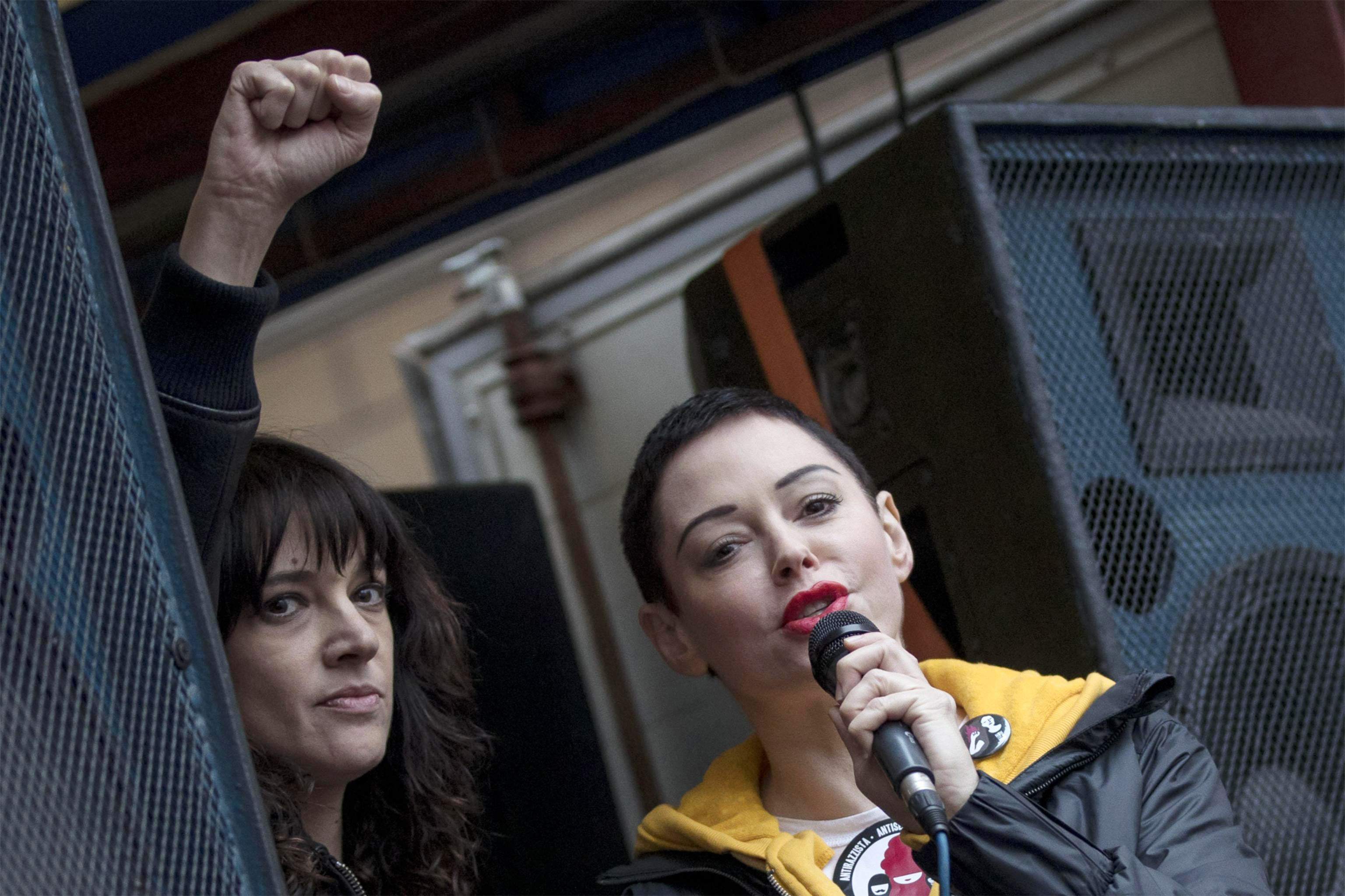 On the eve of the rerelease, Argento still hasn’t watched Scarlet Diva. “I haven’t watched the movie in years,” she says. Before becoming an outspoken member of the #MeToo movement, she spent two decades making movies – including directing and starring in a 2004 adaptation of the J.T. Leroy novel The Heart Is Deceitful Above All Things ­– releasing music and raising her two children, Anna Lou, 16, and Nicola Giovanni, nine. Though Argento says she’s done making movies based on her life (her 2014 film Misunderstood was based on her childhood), she’s considering writing a book. “I want my narrative back,” she says. “I want to tell my own story with my words.”

In fact, when asked why she decided to put Scarlet Diva back out into the world now, she reveals that it wasn’t even her idea. “I didn’t decide to rerelease it,” she says. “No way in hell. Bring attention from the monster? Forget it. They decided this. Some company. I don’t own it.”

She did watch the rape-attempt scene last fall, though, right around the time Farrow’s story went live. “I was in New York and my boyfriend had the DVD and said, ‘I want to watch that scene again,'” she says. She filmed it on her phone and put the clip on Twitter, adding the caption: “I wrote and directed this scene in 1999. #Weinstein.”

But aside from that moment in mid-October, she hasn’t revisited it. “I know I will have to,” she says, “but for the time being, I’m already triggered by so many things that I don’t want to abuse myself more.”

Still, there’s a part of her that is glad that it exists, and glad it’s being recognized now for what it is: tangible evidence – “historical proof” – of her truth. “It was urgent for me to tell a story,” Argento says. “I couldn’t imagine that it would become a relevant document so many years later.”