Long before he became acquainted with the subject of his documentary Jane, Brett Morgen assumed that the primatologist Jane Goodall was a “goody two-shoe[s].” The filmmaker was used to tackling figures with pronounced dark sides like Hollywood producer Robert Evans and Nirvana frontman Kurt Cobain, not the type of scientific icons children study in grade school. “You were like Mother Teresa,” he says, addressing Goodall, sitting on the couch beside him. She shoots back: “You didn’t know me then.”

Goodall, 83, may have a wry deadpan wit and seems to delight in skewering Morgen, but she’s unabashedly impressed with what he’s produced: A moving, memoir-like chronicle of her early experiences studying chimpanzees in Gombe that charts how her patient dedication yielded unprecedented insight. Constructed almost entirely from archival footage captured by her former husband Hugo van Lawick, the film is a nature documentary, an extended home movie, an intimate look at a marriage and, in its own way, an incredible coming-of-age story. (The film, produced by National Geographic, opens in theaters today.) “When I finally saw the film, it took me right back,” she says, before adding. “The other documentaries haven’t.” Past attempts to capture her experiences as an observer in the wild such 1965’s Miss Goodall and the Wild Chimpanzees, she says, left her frustrated with the numerous inaccuracies and narrative liberties in telling her story. Jane, however, simply reminded Goodall of the relationship she had with the chimps.

Though the movie’s introductory title card explains that van Lawick’s 16 mm material was thought to be “lost,” Morgen is quick to point it was more “forgotten,” languishing in National Geographic’s storage facility. “Archivists went through there in 2014, [and] came across a big collection of boxes,” he says. “They said, ‘What is this? Oh, Jane Goodall?’ They put some film on the projector, and saw there was this early footage of Jane in Gombe.” After the organization did 2K transfers of what was discovered, it reached out to the documentarian with the idea of assembling it into a film, impressed with his work on his Cobain doc Montage of Heck. He was reluctant to take on the assignment, however, assuming that there was nothing he could add to the global conversation about Goodall that had been going on for decades.

As for Goodall, she isn’t sure of when she was made aware of the findings; her institute was in negotiations before she was involved. When she was finally asked about the possibility of a new documentary, she responded: “Oh no, not another one. There can’t be any more to say about Jane and those chimps in the early days.” She eventually decided to go along, however, because of the attention a new movie could bring to the endangered chimpanzees. “I was sold on it by [the Jane Goodall Institute] saying we need all the exposure we can get,” she says. ‘We’re struggling to get money for our Africa programs.”

National Geographic initially sent Morgen a reel of raw footage and the earlier ’65 doc. Watching Miss Goodall, even with its dated elements, he says he came to realize what he was dealing with was comparable to the moon landing in terms of significance. “What Hugo documented and what Jane did was something that had never happened in the history of evolution – and, to be honest, would never happen again,” he says. “And it was documented, by an amazing cinematographer, who wasn’t just a wildlife photographer, but a real artist.” 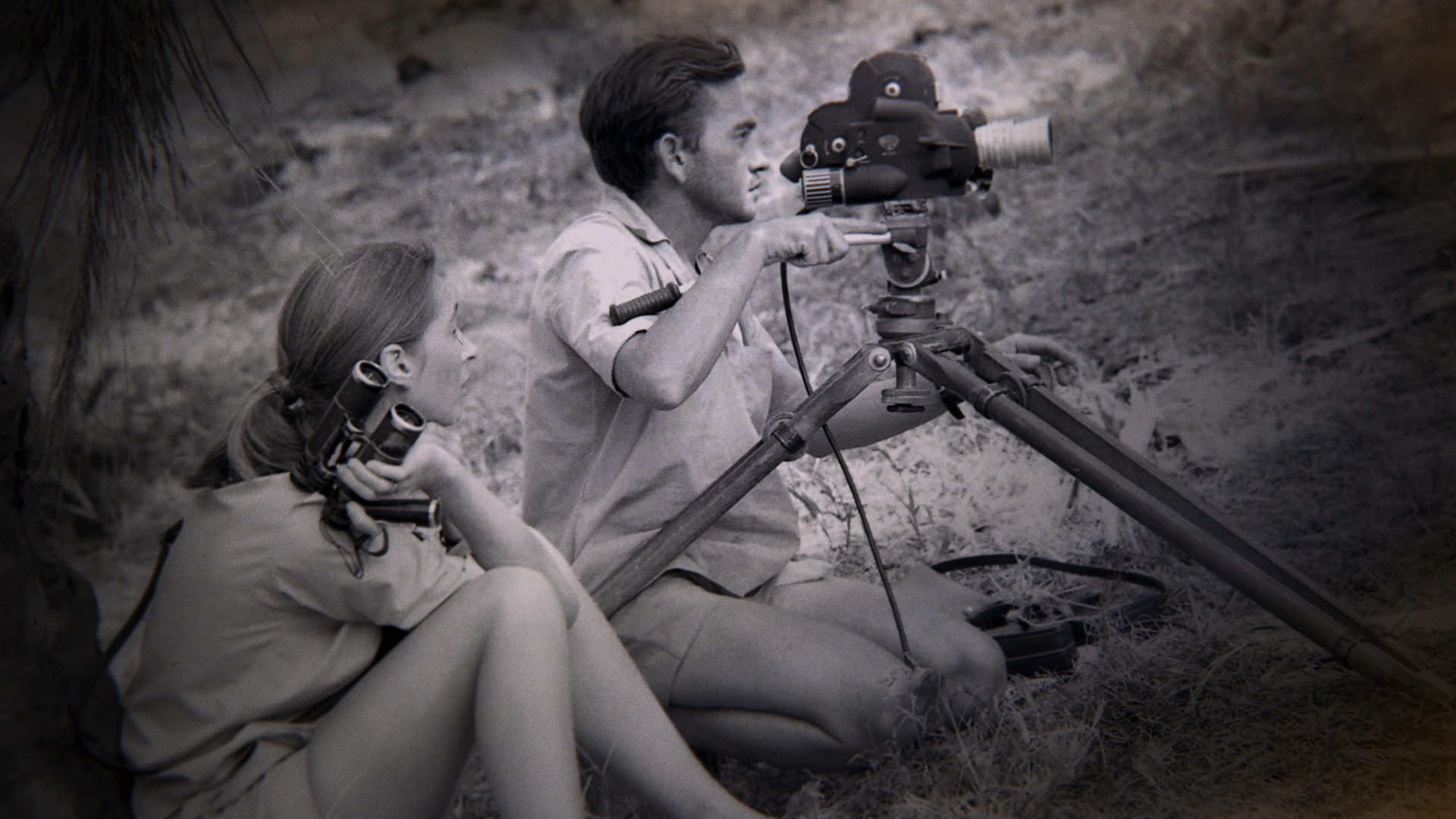 Jane charts Goodall’s evolution from wide-eyed student to wild-life-studies pioneer, starting with her arrival in Africa at age 26 courtesy of a grant obtained by the paleoanthropologist Louis Leakey. She approached her task of observing the chimps with a desire, she says, to embody the spirit of her literary heroes: Dr. Doolittle and Tarzan. Her first major breakthrough came when she witnessed that these animals, like humans, used tools to gather food – a discovery that refuted preconceived beliefs about man. In 1962, National Geographic sent van Lawick to Gombe to make a record of her work. She initially regarded him as an interloper; they soon, however, developed a deep affection for one another. They married and had a child, Hugo, eventually divorcing in 1974 when their careers took different paths. (Van Lawick died in 2002.)

Morgen wanted to take what he found and turn it into an immersive portrait of the woman at the center of it all. “The challenge then became: Can we take this footage that was shot for some other purpose and appropriate it to use for this different reason today?” the filmmaker says. “We found over time through two years of editing, two and a half years of sound editing and a lot of color grading that we were able to make it something new and fresh. Which is why I think we were able to take the same footage that Jane probably saw years ago and have her experience it as something new for herself.”

The movie begins before van Lawick arrives, using establishing shots of Goodall alone that he took to set up the original Miss Goodall film. Morgen initially planned to make his doc, which is scored by Philip Glass, a “cinematic opera” with no narration, but decided that it needed contextualization. In order to have the conservationist tell her own story, Morgen used other recordings of her voice, including the audio version of her book Reason for Hope. Using Goodall’s own prose was crucial, according to Morgen: “It’s what gives our film its soul. Because, here’s the thing: If I were to interview Jane about some of those experiences, and I said, ‘Describe to me the first time you walked into Gombe,’ whatever she’s going to say it would not be invested in the same sort of lyricism that one creates when they’re writing.” 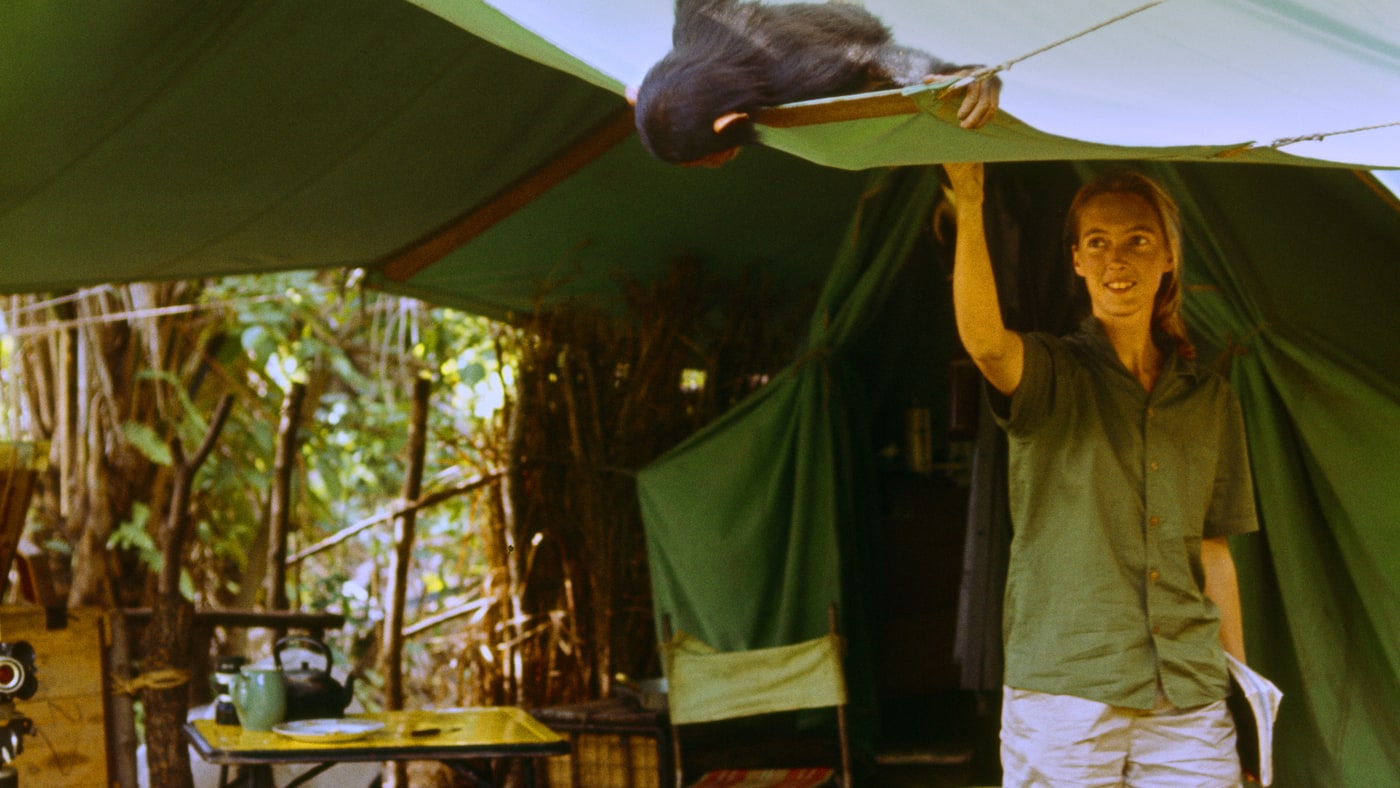 When Goodall did agree to sit down with Morgen for a two-day interview that would be incorporated into the narrative, she wasn’t exactly forthcoming right off the bat. At that point, she had no idea what shape the film was taking. “My first question to [her] was, ‘Do you tire of telling your story?’ And she looked at me and said, ‘Well, it depends on who’s asking the questions,'” he remembers. “And there was no smile. It was very intimidating. I was like, ‘Oh, touché.'” That was, she admits, a joke. Ultimately, Goodall’s only criticism was that Morgen didn’t include enough about her childhood dog Rusty, an early influence on her. In conversation, she continues to maintain that Rusty should have had a more prominent role.

Goodall’s unsentimental yet passionate words course through the documentary, illuminating images that have the intimacy of vintage home movies. Van Lawick caught her in silly moments – she has a tendency to stick out her tongue when she catches the camera observing her – as well as quietly revolutionary ones, such as the moment a normally cautious chimp slowly takes a banana right out of her hand. Morgen uses clips that demonstrate her stoicism, like when she stands, reading, waiting for a chimp to come to her tent to steal food. That’s immediately followed by her glee when the primate she named David Greybeard comes to retrieve a snack. Later, the joys and strains of her own childrearing are drawn in parallel to that of chimp mother Flo and her baby, Flint. Goodall, as Morgen paints her, is as admirable as ever, but is no goody two-shoes: She’s a conflicted, determined force.

It’s the subject’s heroics that make her ever-relevant – someone who Morgen notes is inspiring but not, as he puts it, saccharine. “If we are here on this earth to try to make the world a little bit better just I think Jane’s life is the ultimate example of that,” he says. “It’s also about pursuing your dreams at all costs, something that I think transcends science and gender and is an incredibly important lesson.” It’s fitting, he adds, that Jane is reaching screens the same year Wonder Woman did: “We have a real-life counterpart to that, that can really sort of give a moment of light in this utter sort of dark world that we are currently in.”