When Black Panther star Danai Gurira was five-years-old, her parents moved her from Grinnell, Iowa, population 9,218, to their homeland of Harare, Zimbabwe – a bustling, urban city over two-and-a-half-thousand times bigger than the rural former factory town where she was born. She looked like a local girl, but spoke like a kid from the Midwestern plains. “An American accent isn’t unusual,” says Gurira on a brisk afternoon in Los Angeles, “but sometimes from somebody who looks like me.” Later, her high school theater friends would give her the nickname Megaphone because she had an American girl’s courage to speak her mind. “My voice was really loud,” she claims, grinning. But “no one made fun of my accent. They were so used to it from movies.”

Black Superheroes Matter: Why a 'Black Panther' Movie Is Revolutionary

Ignorant folks have recently called her family’s country an eight-letter slander – and if such insults ever reached Gurira’s General Okoye, the closest advisor of Panther‘s regent-turned-costumed Avenger and guardian of his secret crushes, she might be tempted to grab a retractable spear. One glimpse of her taut, dignified and tougher-than-leather character leading Wakanda’s all-female special forces squad known as the Dora Milaje – or as one character gapes, “some Grace Jones-looking chicks” – and anyone who wants to stay alive in the 21st Century will quickly realize they’ve undervalued Africa at their own peril.

Ryan Coogler’s epic, gamechanging superhero blockbuster may revolve around the adventures of King T’Challa and his efforts to protect his hidden, technologically savvy homeland while adapting to the new responsibility of wearing the crown. But the 39-year-old actress’ Okoye is the movie’s secret weapon – steady, strong, the kind of anchoring presence that can seem fierce one second and, courtesy of a skeptical side-eye glance, be terrifically funny the next. She commands attention from her first scene in the film: a broad-shouldered protector in lotus position waiting for a call to attack. And after rescuing a caravan of kidnapped Nigerian girls, she is the one who gets what may be the movie’s most breathtaking cinematic hero shots: A warrior lit from behind and rimmed in gold.

“I want to tell stories about strong, complicated, African women,” says Gurira. It’s the night after Black Panther‘s premiere and while everyone else seems exhausted, she sits tall in a cream-colored coat tucked tightly around her neck, nibbling on brie without smudging her perfect berry lipstick. Stories matter, especially to kids. In Zimbabwe, they helped her stay connected to the United States. Her mother hung an autographed picture of Martin Luther King Jr. on the mantel and told her daughter about meeting the Civil Rights leader when she was a college student in Illinois.

Mostly though, Gurira kept connected to her birthplace through pop culture. “I read Judy Blume, I read Roots, I read everything,” she says. The self-described “Zamerican” listened to Snoop Dogg and watched Dynasty, imitating Joan Collins’ Alexis Carrington in her backyard. Sometimes, the culture even came to her, like when she got to shake hands with a visiting Nina Simone.

And, of course, she watched Hollywood movies. “American culture is everywhere,” notes Gurira. For better or worse: “My culture isn’t everywhere,” she adds, though Black Panther‘s likely blockbuster status will help. But at least Hollywood gave her a tie to her small-town birthplace. And occasionally, it would reflect her roots back to her: Long before she became a warrior of Wakanda, she says, her spirit wandered Zamuda, i.e. Eddie Murphy’s fictional African kingdom in Coming to America. The Eighties comedy about a restless prince in search of a independent black princess remains one of Gurira’s favorite movies, and like Panther, it’s story about African royalty that imagines a proud culture uninterrupted by colonizers – a myth about what history should have been. The movie remains such a touchstone for her that last year, she and her Black Panther co-star Lupita Nyong’o threw themselves a costumed birthday party where Gurira dressed like Murphy’s queen-to-be. (Nyong’o wore the gold mutton sleeves of her lady-in-waiting, while T’Challa himself, Chadwick Boseman, goofed off as Arsenio Hall’s Reverend Brown.) ￹￹￹

Gurira even opened one of her six staged plays, the Tony-nominated Eclipsed, with a teenage orphan breathlessly recounting Coming to America‘s plot to the two other captured wives of a Liberian rebel commander. “He say, he say, ‘You sweat from a baboon’s balls,'” the young woman howls. It was the first all-female production in Broadway history; not the first all-black female – though it was that, too – but first all-female full stop. Nyong’o played the girl, and every night she and Gurira would dedicate the evening’s performance to women who’d been kidnapped by Boko Haram. The duo were inadvertently doing a dry run for their scenes in Black Panther, complete with their own female army of sorts and a soldier inspired by real-life Liberian rebel commander Colonel Black Diamond – a young woman who battled former president Charles Taylor’s soldiers in feminine tops accessorized with an AK-47. One night while they took a bow, there was someone loudly clapping in the audience: Black Panther director Ryan Coogler. He’d found his leading ladies.

In Okoye’s biggest action sequence, she wears the same bright red that Black Diamond favored – though, stresses Gurira, the two female African soldiers have a key difference: Okoye could never betray her country. “She’s very loyal, faithful,” she says, likening her to a federal employee whose vow supersedes party loyalty. “She carries a lot of weight on her shoulders, a lot of responsibility.” In costume, Gurira imagined herself wowing a 12-year-old Wakandan girl to join the military. On set in Wakanda’s tribal council room with its tall, gold columns and two lines of Dora Milaje guarding the throne, she was energized by her character’s need to protect this world. Instead of fighting in anger, she’s fighting for love. (Danai means “to love one another” in Shona.)

Growing up, Gurira figured she’d be an activist, not an actress. At first, theater was a hobby. In 7thgrade, she made her debut as the title character in the Zimbabwean play, My Uncle Grey Bhonzo. (Yes, as the uncle.) She gravitated toward characters who were outspoken, which often meant men. When her high school staged Hamlet, she played Laertes. She loved the classics – Chekhov, Ibsen, Shaw – but felt her voice was missing in the canon. After returning to America for college, she went to NYU for her masters degree in acting, where she decided to write her own monologues. Those early pieces bloomed into her first play, the two-woman show In the Continuum.

“I believe in creating my own opportunities,” says Gurira. Not just for her, but for the women her words might inspire, young theater kids in who would have more personal monologues to read (Gurira co-founded Zimbabwe theater outreach program Almasi Arts), and other rising actresses like Nyong’o. The future Oscar-winner and 12 Years a Slave star had read Eclipsed at Yale; she and Gurira became friends nearly a decade before either could imagine making both Broadway and Hollywood history. Their affection in Black Panther is earned. “After Lupita got the Oscar, she kept talking about doing my play,” Gurira says. Nyong’o even managed to wedge a plug into her first Vogue cover, telling the interviewer how much she loved her friend’s work.

By this time, Gurira was a well-known actress herself thanks to Michonne, The Walking Dead zombie-slayer known for her two katanas and her take-no-shit attitude. She’d always been an intellectual jock who ran track and played field hockey and tennis. Suddenly, she was famous overnight for playing the TV series’ toughest warrior – and she was driving around with fake swords in her trunk for practice. Imagining an encounter with the cops, she mimes taking out her phone, pulling up a picture of her character and saying, “No, see?” 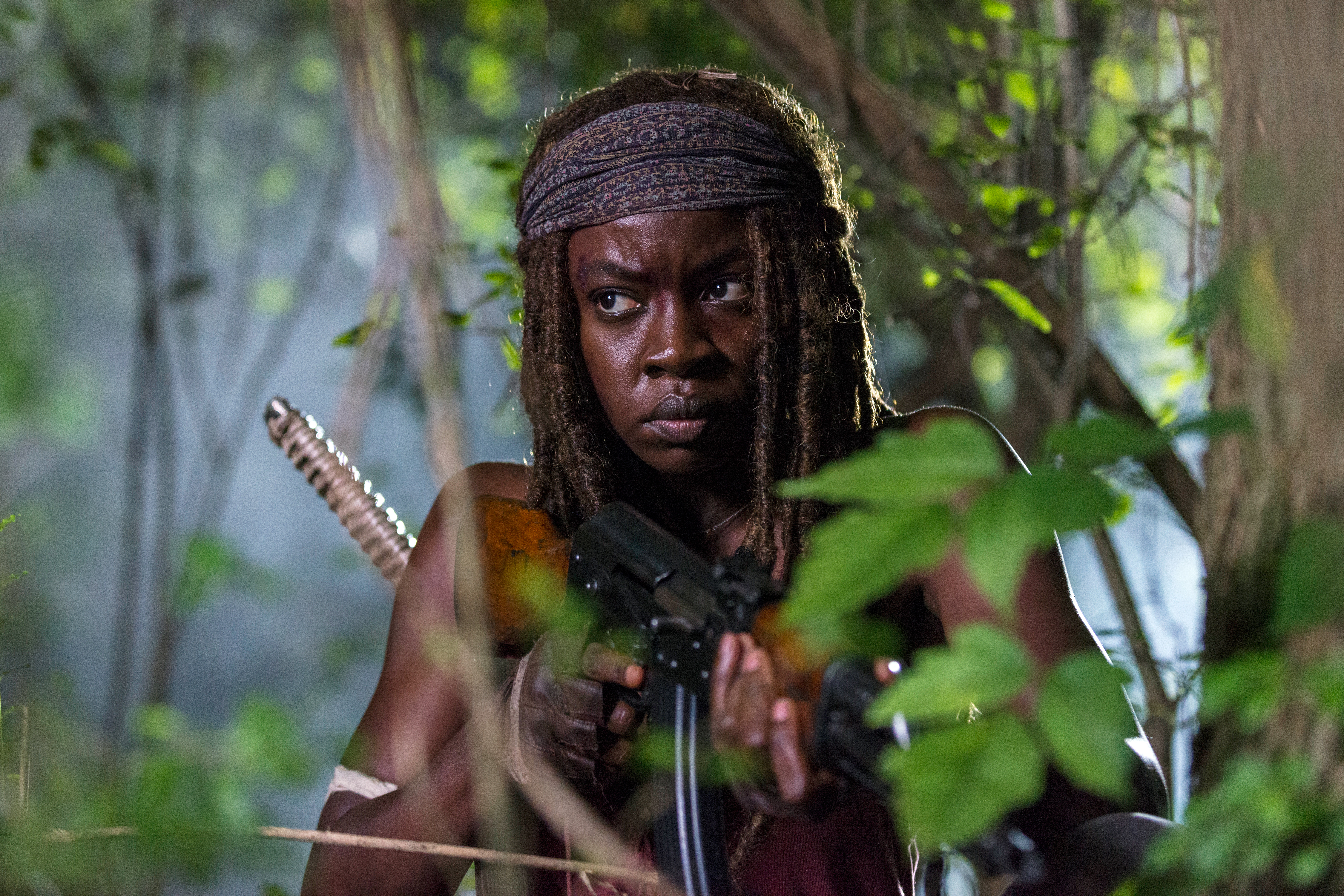 Theater made Gurira a name, and Michonne made her a star. Black Panther, however, is about to make her an icon. “She really took ownership of Okoye,” says Coogler, adding that he’d written the role with her in mind. “I like working with actors that are writers because they tend to be strong with improv, you know? And they tend to make their lines bulletproof.”

True, but some of Gurira’s best bits are barely verbal: a wink, a nod, a watchful gaze or, during an undercover battle scene in a Seoul nightclub, a GIF-worthy shot of Okoye flinging her hated costume wig at a perp.”You don’t need that hair,” she says, laughing. Three guesses how that clip is going to play on Twitter. The bigger question is: How will Black Panther play in Gurira’s African hometown? On a recent trip to Zimbabwe, people were excited to see it. Still, she’s seen firsthand staging her own plays how references that get giggles in Manhattan trigger wise groans in Harare. “I can’t wait to see how it goes in South Africa,” she says. “I really can’t predict it. I hope they think we got the” – Gurira replicates the glottal throat-clicks of numerous African dialects – “right.”

Still, she knows the stakes – and the potential – if Black Panther is a global smash. “There are so many more stories about African women to tell,” says Gurira, adding, “and there are other Americas than what we see in the movies.” What would life have been like if she’d never left Ohio? What’s it like now for young girls in Zimbabwe who, like her, are watching movies to figure out who they can grow up to be? And can she channel her stardom into getting fans to see stories about about strong black women who don’t even have to pick up a weapon?

And though she’s managed to balance activism and acting, the former still occupies a lot of Gurira’s time – from speaking out about violence against women at the United Nations to saying at an awards ceremony five days after the 2016 election that she’s “felt a calling to do more.” After fighting zombies, female traffickers, and the white male dominance of Broadway, are politics in Gurira’s future? “I want to do so much with telling stories,” she insists. Then she pauses, considering what to say. Finally, the mighty megaphone can’t resist adding: “Maybe in 10 years, we’ll see.”