Chris Pine kept fixating on a single image. “I had this picture in my head,” the 35-year-old actor recalls, his voice echoing over a speakerphone from Austin, Texas. “It was two guys on a porch, real rustic. One of them is sitting, the other is standing, kind of leaning on one of the porch’s columns. Both are sort of staring out in the distance while the sun’s going down.” He stops for a second, then continues. “I just kind of got into my brain after I read the script. It was really evocative for me … I’m not sure why. But I kept thinking about it, and every time I was ‘getting into character,’ I pictured that. It was sort of the movie, to me, in one shot.”

When you see the image Pine is talking about, which appears a little past the midway point or so of Hell and High Water, you understand why it might help him find the mood of the movie’s mournful take on living and dying in the closest thing we’ve got to a modern wild frontier, i.e. the outlands of Texas. (You can catch the shot at the 43-second mark in the trailer below.) It’s a crime thriller about brothers holding up small banks, updating a tried-and-true B-movie narrative about robbers on the run and the men trying to catch them. But gracefully nestled within this gritty nugget of Lone Star pulp is a story about fraternal bonds (blood-related and otherwise), social commentary about the way our financial system fucks over the little guy and the sense that certain things are coming to an end — both the ability to live with dignity when the game is rigged and the myth of the American West. It was one of the few small U.S. films to genuinely wow audiences at this year’s Cannes Film Festival. And somehow, as it transitioned from a limited opening to a wide release over the weekend, in a landscape dominated by superheroes and foul-mouthed sausages, this critically praised, minor-key gem has slowly emerged as the unlikely sleeper hit of the summer.

“Disenfranchisement, the sense that institutions have abandoned folks, the passing of the old, the wounds of the country — it was in there from the start,” admits the film’s director David Mackenzie (Starred Up). According to the movie’s screenwriter Taylor Sheridan (Sicario), Hell or High Water‘s genesis sprang from two different sources: a visit to his old stomping grounds, where he saw closed-down storefronts and “empty house after empty house after empty house”; and seeing his uncle, noted U.S. marshal Parnell McNamara, forced to retire despite still feeling he had something to offer. From there, Sheridan imagined two intersecting story strands, one of which involves a Cain-and-Abel pair of siblings (Pine and Ben Foster, in full howling-at-the-moon mode) liberating regional banks with a specific stick-it-to-the-man purpose in mind. The other focuses on an ornery Texas Ranger and his longtime partner — the flipside of the outlaw duo — tracking down the twosome down before the former hangs up his gunbelt.

The fact that the lawman is played by Jeff Bridges only adds another layer to the film’s throwback vibe — Mackenzie wanted the actor to portray the veteran marshal who affectionately ribs his Native American buddy with racist banter, partially because he’s a fan (the director immediately namechecks Fat City and Heaven’s Gate) and partially because “I knew it would tap into his own iconography and past, especially his work in the 1970s. It’s not a coincidence that the first robbery takes place in Archer City, for example; it’s the place where The Last Picture Show is set. I love the connection of the DNA of some of my favorite films of the era, you know … the humanity and the slightly freewheelin’ sense you got out of these movies, while not being afraid to look at America’s past in a very critical way.”

“It does have kind of a Seventies last-of-the-West feel to it, doesn’t it?,” Bridges says enthusiastically when told about Mackenzie’s last comment. (He’s slightly more diplomatic about the idea that his marshal might be a descendant of his equally gruff, cantankerous True Grit character Rooster Cogburn, with a hint of Jeffrey Lebowski’s laidback attitude. “That’s a pretty interesting concept there, man,” he chuckles.) “I mean, that’s one of the themes of the movie: The times, they are a-changin’.

“But what you’re talking about, with those movies that David brought up,” he continues, “is this ambiguity about right and wrong, and them not being so clear as you might think. Robbin’ banks — it’s a bad thing to do, right? But then, is it righteous for banks to be loaning people money that they know very well can’t pay it back … and then they can grab their oil-rich land? That gray area is one of the more cool things about the film, I think.” 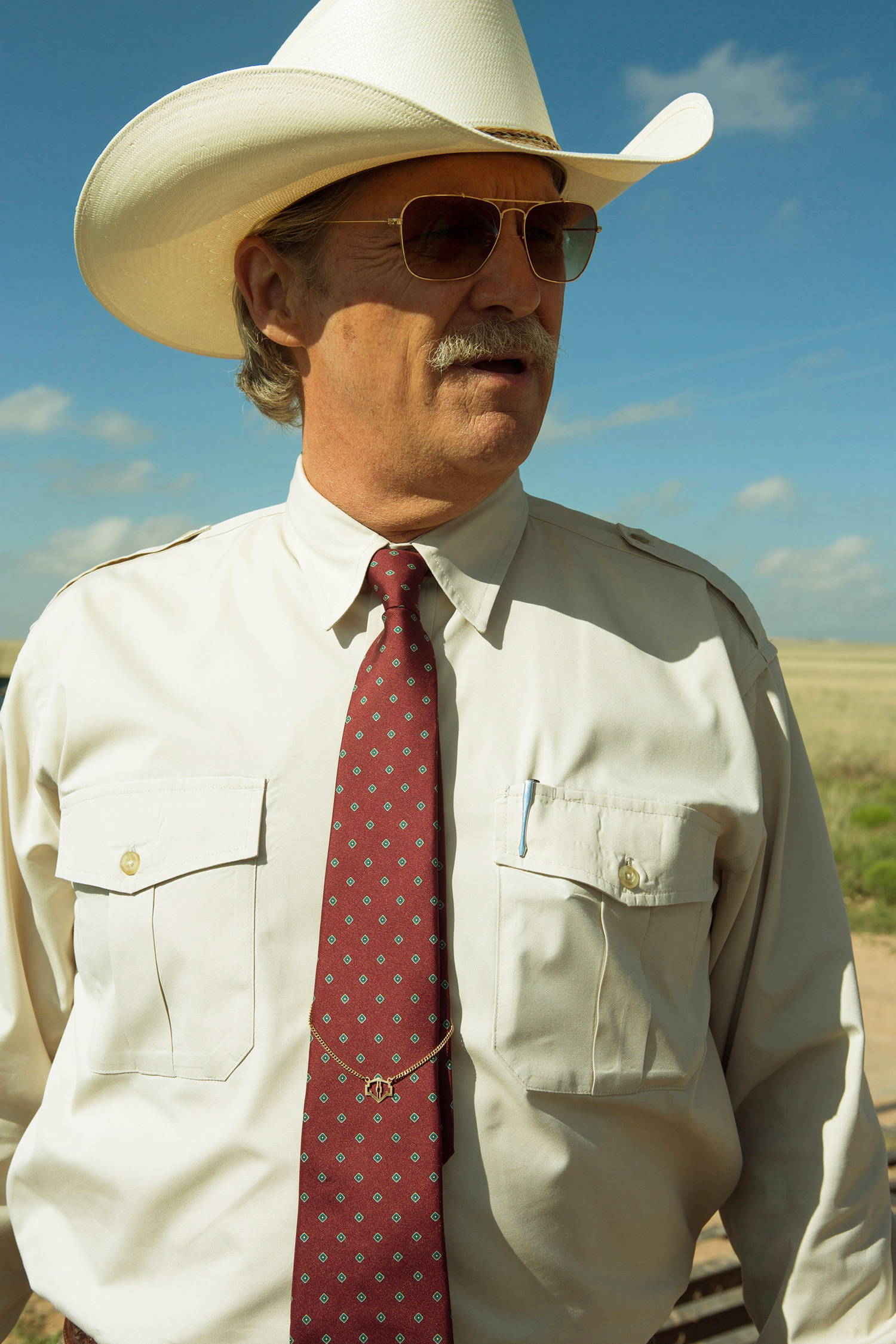 Ambiguous about its criminal protagonists or not, Hell and High Water makes no bones when it comes to the subject of the nation’s class disparity and hard times. The robberies that the brothers commit have a personal impetus, involving the family home and the threat of foreclosure (they’re literally paying off the bank with their own pilfered money). Every highway is dotted with billboards advertising debt relief. After a waitress gets a large tip from Pine’s character, she refuses to hand it over to as evidence because she’s “using it to keep a roof over my daughter’s head.” Bridge’s Comanche partner, played by the actor Gil Birmingham, laments how his people’s land used to be stolen by armies, and now it’s being taken by them, gesturing to a bank they’re staking out — one of several lines in which jus’ folks point out that the real robbers in these parts don’t wear ski masks but three-piece suits.

All of which comes to a head when fate allows the working-class criminal and his authoritarian pursuer to eventually meet face to face, in a stand-off that echoes the image Pine had running in heavy rotation in his head: two men on a porch, shooting the shit — only this time “the bad guy” cradles a shotgun and “the good guy” has his hand on his holster, testing each other to see who gives in first. “If it was a different kind of movie, my guy would have walked in and just assassinated the kid,” Bridges says, laughing. “In this movie, they sit down, have a beer, and talk … so there you go. My character, he’s a lawman, but he’s got compassion for this dude. He’s curious to see what’s behind all this.” He goes silent for a second. “I mean, we could all stand to be a little more curious about each other, right?”

As for Pine, he claims he went in to the project well-prepared to tackle anything (the actor credits a documentary on Colorado cowboys as being the key that unlocked his character: “There was one cowboy who was telling a story about a dead buddy of his, and every time he started to cry, he swallowed hard — like he was trying to force his sorrow down. I thought, ‘That’s my guy.'”) Then when it came time to hash out his “OK Corral” scene with Bridges, a personal hero of his, he suddenly found himself at a loss. “We met and rehearsed the scene once, and he was already off book,” Pine says. “I had to start shooting in a few days — he wasn’t coming in until the end — so I thought, Man, I need to get my shit together. Then by the time we finally got to it, it just worked.

“But the best part was,” he adds, ” was that afterward, he goes, ‘Why don’t you come by the trailer and we’ll play some music?’ I got to play country-and-western songs with Jeff Fucking Bridges. While he’s sitting there drinking a White Russian! It was the best fucking day of my life.” He cracks up. “I mean, maybe, if he’d given me his flip-flops and one of the Lebowski sweaters, that might have made it better. But for a second, I was living the dream. It was no sitting on the porch looking at the sunset, but it’ll do.”