The ambitious new Western The Harder They Fall (in theaters and streaming on Netflix now) begins with a winking disclaimer: “While the events of this story are fictional . . .” the opening title card reads, “These. People. Existed.” The feature debut of writer-director Jeymes Samuel stars Jonathan Majors as the outlaw Nat Love, one of America’s most famous Black cowboys. Around him, Samuel assembles an Avengers-like crew of real-life Black heroes from America’s frontier era — Stagecoach Mary (Zazie Beetz), “Treacherous” Trudy Smith (Regina King), and Cherokee Bill (LaKeith Stanfield), to name a few — for a shoot-’em-up adventure delivered with gory flare.

“It’s not a biopic,” Samuel says via Zoom from London. “But it can change perspectives of what has been presented to us as the Old West.”

The film opens with the gruesome murders of a preacher and his wife in the presence of their young son. One of the outlaws etches a cross in the boy’s head. That boy, of course, is Love, whose destiny, following the classic Western trope, is to avenge his family. It’s a story that will see him join forces with Mary, Jim Beckwourth (RJ Cyler), and Bill Pickett (Edi Gathegi), and bring him face-to-face with a merciless gang led by another legend of the Old West, Rufus Buck, played by Idris Elba. 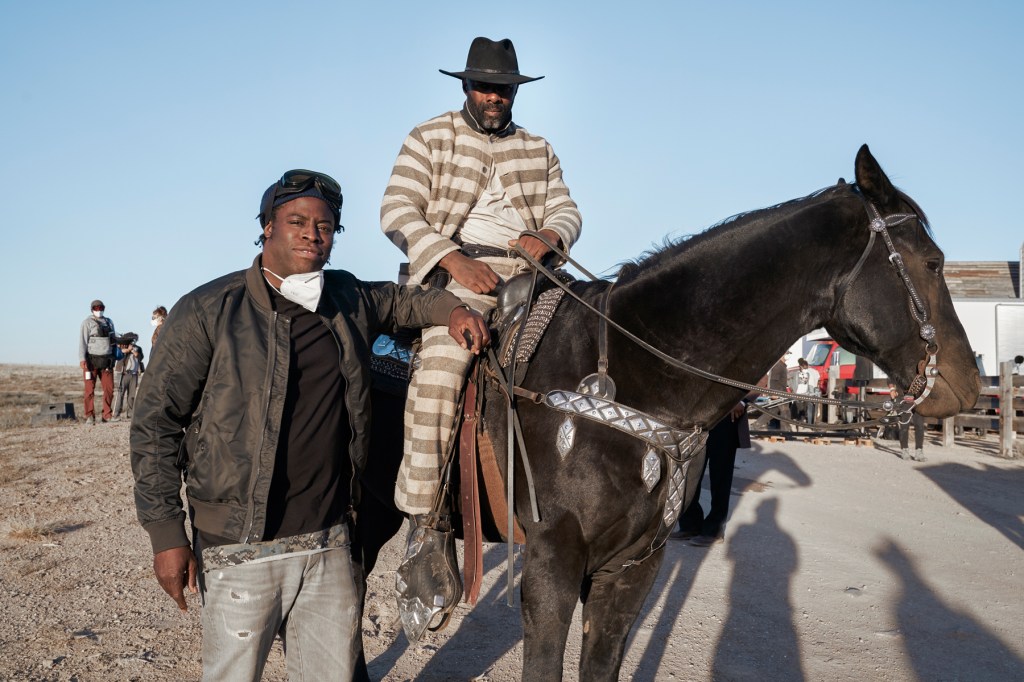 A self-proclaimed lover of Westerns, Samuel says that he’s been unconsciously researching this movie for much of his life. “I just loved the stories,” says the filmmaker, whose 2013 short, They Die by Dawn, also features many of his new film’s heroes and bandits. He sees a connection between those characters’ struggles and his own. “I grew up in Mozart’s Estate in West London. And the things that we would experience I find bleeding into the story of The Harder They Fall,” Samuel says. “I wanted to show the cycle of violence that I grew up seeing.”

Visually, the movie is rendered in the vibrant color palette of a music video, while maintaining a distinctly classic feel. Samuel’s vision of the sprawling Old West arrives in warm hues that offers a subtle canvas that elevates the characters’ humanity. The rich texture of the environment makes Stanfield’s stylish swagger even more compelling — at once modern and like a newly discovered piece of history. “The way I wanted the movie to look, visually, was like a painter [painted in] 35 millimeters,” Samuel says.

The lush backdrop stops short of being over-stylized, not unlike the movie’s score, which Samuel — who began his career as a musician under the stage name the Bullitts — composed himself. With a heavy reliance on the earth-trembling bass of dub and reggae, The Harder They Fall presents a refreshingly anachronistic sonic landscape. Barrington Levy’s dub classic “Here I Come,” for example, backs an exhilarating sequence where the notorious Buck escapes from shackles. But Samuel’s approach has deeper implications than just being a mash-up of time periods.

“I wanted to connect the entire diaspora of our culture with this story,” Samuel says. “Because it’s all the same trauma that we went through that spawned these beautiful genres of music, from soul to reggae to gospel.”

While it’s a noble mission, narratives designed to shift understandings of race can either land as a matter of political urgency, or as something more cynical. Last year, the HBO series Lovecraft Country was met with criticism over what some saw as opportunistic use of traumatic events in Black history. Similarly, the racial re-imagining present in the Netflix series Bridgerton left some critics wondering if the show lent itself to historical amnesia.

Samuel’s film manages to achieve something resonant. More than offering a knowing wink to viewers, he makes a strong case for historical accuracy. The Harder They Fall isn’t the first film of its kind. There have been a handful of movies about the people of color who were also Old West badasses — 1972’s Buck and the Preacher, starring Sidney Poitier and Harry Belafonte; 1997’s Buffalo Soldiers, with Danny Glover. Still, the Old West was replete with swashbuckling Black folk who had their own mythos that, for generations, has gone unacknowledged.

Samuel says his film is simply correcting the record: “You want to broaden the thematic landscape with truth. If you remove women and people of color from the storylines of the Old West, you don’t necessarily have the Old West at all. You pretty much have a lie.”