It was early 2015, and the Twilight star was now three years removed from Edward Cullen, the iconic vampire heartthrob who made the British actor’s name but had also painted him into a corner. Looking to break free, the then-29-year-old star began seeking out daring dramas and working with filmmakers like David Cronenberg, David Michôd, Werner Herzog and James Gray. He was determined to prove that he wasn’t just a YA pinup. And in the midst of that reinvention, Pattinson stumbled upon a promotional still for Heaven Knows What, a gritty, unsparing 2014 New York indie about a homeless woman ravaged by heroin addiction.

“It really struck me,” he says softly, sitting in a Beverly Hills hotel suite, remembering the moment. “You normally see really striking imagery in a lot of European movies. But it’s rare to see that coming out of American independents.”

Pattinson knew nothing about the movie – he hadn’t even seen a trailer. Nor had he seen any of the previous films by its directors, the brothers Josh and Benny Safdie. But, looking at that image, he knew: He had to be in business with these filmmakers. So Pattinson emailed them.

“When I like something, I get unbelievably enthusiastic,” the actor explains with a warm, ingratiating smile. “The first email I sent was like, ‘I’m completely certain that we’re supposed to do something together.’ And they’re like, ‘Have you seen any of our stuff?’ I said, ‘Nope, don’t need to see it. I know.'”

Cut to two years later, and the result of that initial interaction is ready to blow a hole through the screen. Good Time  follows a two-bit crook named Connie Nikas over the course of one increasingly frenetic night in Queens, as this determined low-life goes on a frantic quest for bail money in order to spring his mentally challenged brother out of jail after a bank heist goes bad. To say that this electric indie thriller recalibrates what we think of Pattinson would be putting it mildly – yet it’s also a hell of a coming-out party for the Safdies, two under-the-radar filmmakers known for dynamic cult dramas like 2008’s The Pleasure of Being Robbed and 2009’s Daddy Longlegs. It’s an urgent, pulpy crime flick, but more importantly, Good Time is a marvel of good timing – the combustion of an actor wanting to go dark and filmmakers looking to expand their commercial profile.

In a separate interview, Josh and Benny Safdie remember that initial
exchange back in 2015, which took place as they were preparing to screen
Heaven Knows What at South by Southwest. “I noticed that his
struggle that he was going through was not a commercial one,” Josh says
of Pattinson. “He was after something deeper.”

As it just so happened, the brothers were after something themselves. They specialized in out-of-the-mainstream films, which boasted nonprofessional actors, dark subject matter and an emphasis on raw, street-level evocations of everyday life. Their movies benefited from lots of critical acclaim, but the duo had hit a ceiling outside of the festival-circuit bubble. “We’ve been making these features for, like, a decade,” says Josh, who speaks in impassioned bursts, his quieter brother sitting beside him listening. “We were a little bit frustrated with the lack of an audience. We understood that they were reaching certain people – and we’re making these films primarily for ourselves. But every movie we make, we think about them as blockbusters.”

So the idea, they say, was to try something slightly different this time out. “We wanted to make a rocket ship,” Josh explains. “We had this burning desire to make a pulpy genre thriller. We wanted to take everything that we’d learned on all of our character studies and tie them into a genre. We didn’t want to make it an exercise.” He shakes his head. “I can’t stand when something is ‘an exercise.’ We’re not doing this to naval-gaze.”

First, however, they had to figure out what kind of story they wanted to tell. As Pattinson recalls, “The initial treatment was, I was getting out of prison, and my brother was in an acting class. I go to join the acting class, and then there’s a person who is learning how to act who is a makeup artist. He does prosthetics, so we use prosthetic makeup to rob banks in disguises.”

That sketch of a storyline soon morphed into a tale of Connie and his brother Nick (played by Benny Safdie), who brazenly pull a bank heist in broad daylight. But after the job goes pear-shaped, Nick panics while being questioned by cops, winding up arrested as Connie runs for it. Pattinson envisioned the character in the mold of indelible 1970s roles he’d longed to play when he was still an aspiring actor. “You’d watch Mean Streets and think, ‘I would never, ever be able to get that.'” he says. “When I first started acting, everyone’s like, ‘Oh, you went to private school? You’re an English person? That means you’re gonna do period dramas and that’s it.’ Even my agents at the time were like that. You have to prove these things – and you have so few opportunities to prove it.” 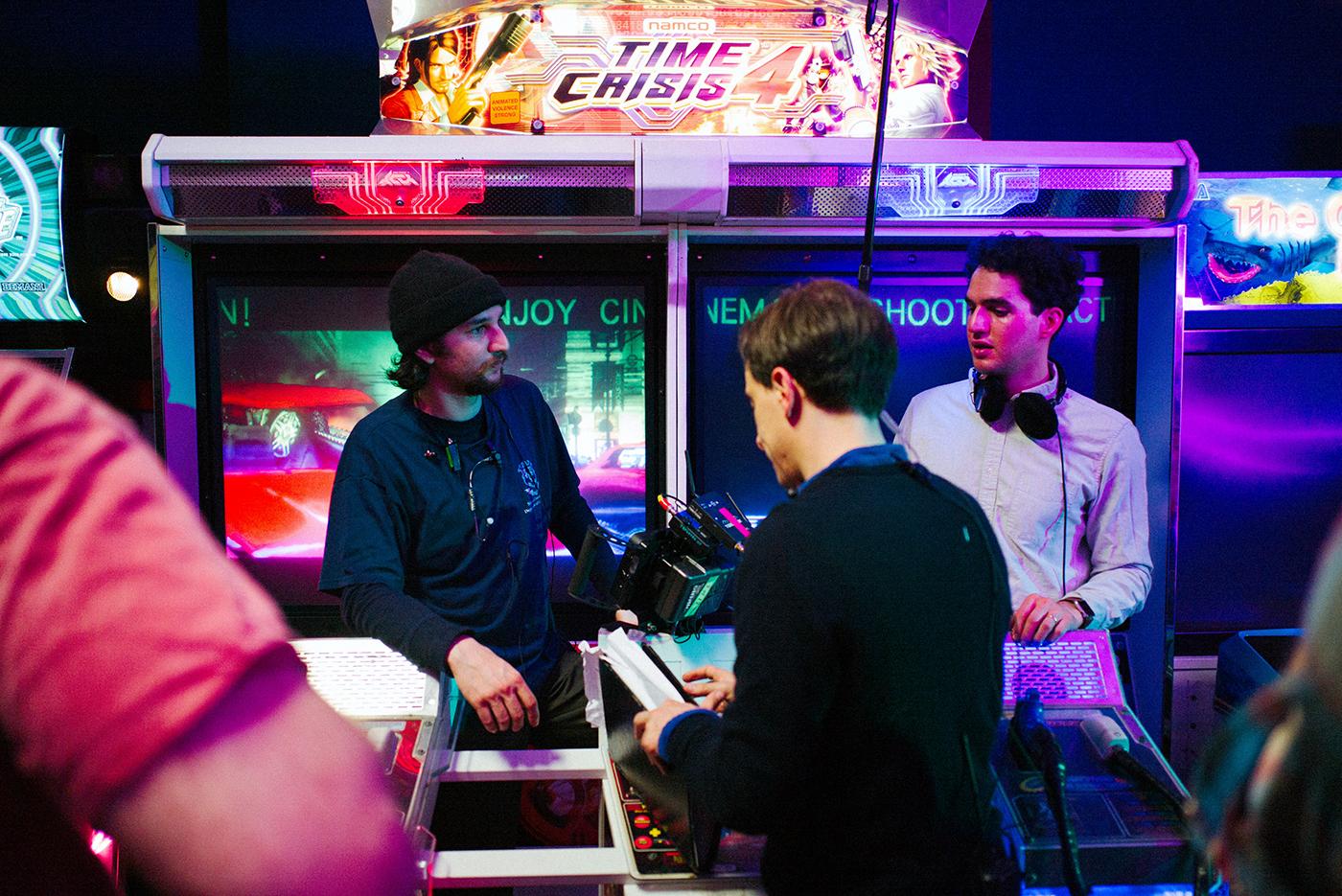 All three men insist that they weren’t worried about how a trained actor would work with the Safdies’ non-pro casting. (Jennifer Jason Leigh and Captain Phillips breakout star Barkhad Abdi also appear briefly.) “I think part of the attraction for Rob is that he knew we weren’t going to be worshipping [him],” Josh says. As for Pattinson, acting alongside actual bail bondsmen and criminals offered moments of liberation and terror. “I’m always thinking another actor is judging me,” he says with a self-deprecating laugh. “So, if you’re doing something and you think the other [professional] actor’s thinking that what you’re doing is inauthentic, you just go, ‘Well, you just don’t have taste.’ But if the other person’s essentially playing themselves and they think you’re being inauthentic – you’re genuinely being fake.”

Still, the Safdies drew the line on authenticity when it came to casting Benny as the mentally challenged Nick. “We were looking at people who had developmental disabilities to maybe play that part.” Benny explains. “But that was kind of problematic for us, because in order to get them to do things and say things [in the movie], we’d have to push them, manipulate the situation. It felt wrong, morally, to do that.”

And while this experiment in grunge-ing up one of the world’s most famous faces should be considered a success for everybody involved – especially Pattinson, whose edgy, desperate turn feels like a real breakthrough for the actor – it’s telling how differently the star and his directors perceive their triumph. For the Safdies, who always consider what they’re making to be blockbusters, they’re cautiously optimistic about the prospect of greater visibility and a better chance of getting future projects off the ground. (They’ve already lined up Jonah Hill for their follow-up, a thriller called Uncut Gems.)

“I’m getting a sense – I hope it’s not a false sense – that this
could work,” Josh says, laughing nervously. “For the first time, we’ve
been invited to the table. The echo chamber’s very loud; I just hope that this can break out of the chamber. Because, you know, I want to see more stuff like this.”

For Pattinson, however, the appeal was the opportunity to disappear. “Me and Benny did maybe four days where we’d just go and talk to people fully in character,” the actor says. “It was just amazing — I’ve never done anything like it. We went into a Dunkin Donuts in Yonkers and just had lunch there – totally in character. And we’re just talking to the people who work there. People weren’t questioning anything.” He laughs, suddenly aware of the actor-ly preciousness of what he’s saying. “It’s probably ’cause they just didn’t care.”