“There’s a saying: When the shit hits the fan, it’s never evenly distributed.”

Leon Vitali is describing what a bad day on a Stanley Kubrick set was like. And he knows better than any man alive. Not long after he was cast as Lord Bullingdon in the 1975 period piece Barry Lyndon, the then-25-year-old actor was seriously worried he wouldn’t survive the shoot. He had been a devotee of the director since seeing 2001: A Space Odyssey during its theatrical release and had watched other actors come and go on the whims of the famously tempestuous director – “We had three different George III’s,” he recalls.

So when Kubrick called him back for a talk during a lunch break, Vitali assumed he was getting the hook. Instead, the filmmaker praised him as “extremely focused” and wanted to see more of him. A bit part gradually mushroomed into a crucial supporting role, kickstarting the beginning of a creative partnership that would continue through three more films, the rest of Kubrick’s life and for nearly another two decades after his death. “I think he saw possibilities in people as much as anything else,” says Vitali. “It’s a wonderful facility to have as a filmmaker: ‘Oh, it needn’t go the way I thought. Let’s see what happens if we take it down another path.’ That’s the kind of person Stanley was.”

In his new documentary Filmworker, director Tony Zierra accounts for the many jobs that Vitali did for Kubrick over the years, but even the subject can’t remember all of them when asked. As casting director and dialogue coach, Vitali weeded through thousands of child actors to find Danny Lloyd for The Shining; he then stayed with the six-year-old on set, coaxing him through take after take after take. He was crucial in helping the late R. Lee Ermey make the leap from off-screen military adviser to the galvanizing role of drill sergeant in Full Metal Jacket. He worked on promotion; approved subtitle translations for countries around he world; became an expert in color timing; and continues to supervise transfers for Kubrick reissues on Blu-ray, 4K and 70mm. He played several orgy-goers in Eyes Wide Shut, including the red-masked ringleader. He even stomped around Kubrick’s estate to Foley the footsteps in Full Metal Jacket.

In fact, most
of the images and clips used in the documentary make Vitali seems like a Kubrickverse version of Zelig –a
guy tucked in the corners and backgrounds of a picture, in all the right places at all the right times. Zierra convinced several of the actors Vitali coached
to appear as
talking heads in the film – including Lloyd, who rarely submits to
interviews. Ermey credits him for putting his drill-sergeant
routine on video, which persuaded the director to recast
the role; Matthew Modine
says he and his Full Metal Jacket castmates were initially worried
that the constant red-haired presence on the periphery was a spy. Zierra also gets Vitali to crack
open up his personal treasure trove of materials, from a log of Lloyd’s
allotted hours as a child actor (it’s labelled “BOOK OF LIES”) to reams
of handwritten instructions and approbations.

It’s an incredible behind-the-scenes look at the art and grind of making movies, and both the documentarian and his subject describe the project as a salute to the unsung “below-the-line” artisans that make a film happen. Still, even by those standards, the man at the center of this portrait is a special case. For anyone to morph from being an actor to a jack-of-all-trades would be remarkable enough under normal circumstances, but Vitali also had to meet Kubrick’s exacting standards, log 16-18 hour work days without a vacation and withstand the director’s infamous mood swings. He credits his childhood for thickening his skin.”My father was a frustrated creative person who was just unbearable at times, the worst of the worst,” Vitali says. “But he could also be the best of the best, so it was always an up-and-down kind of thing.” 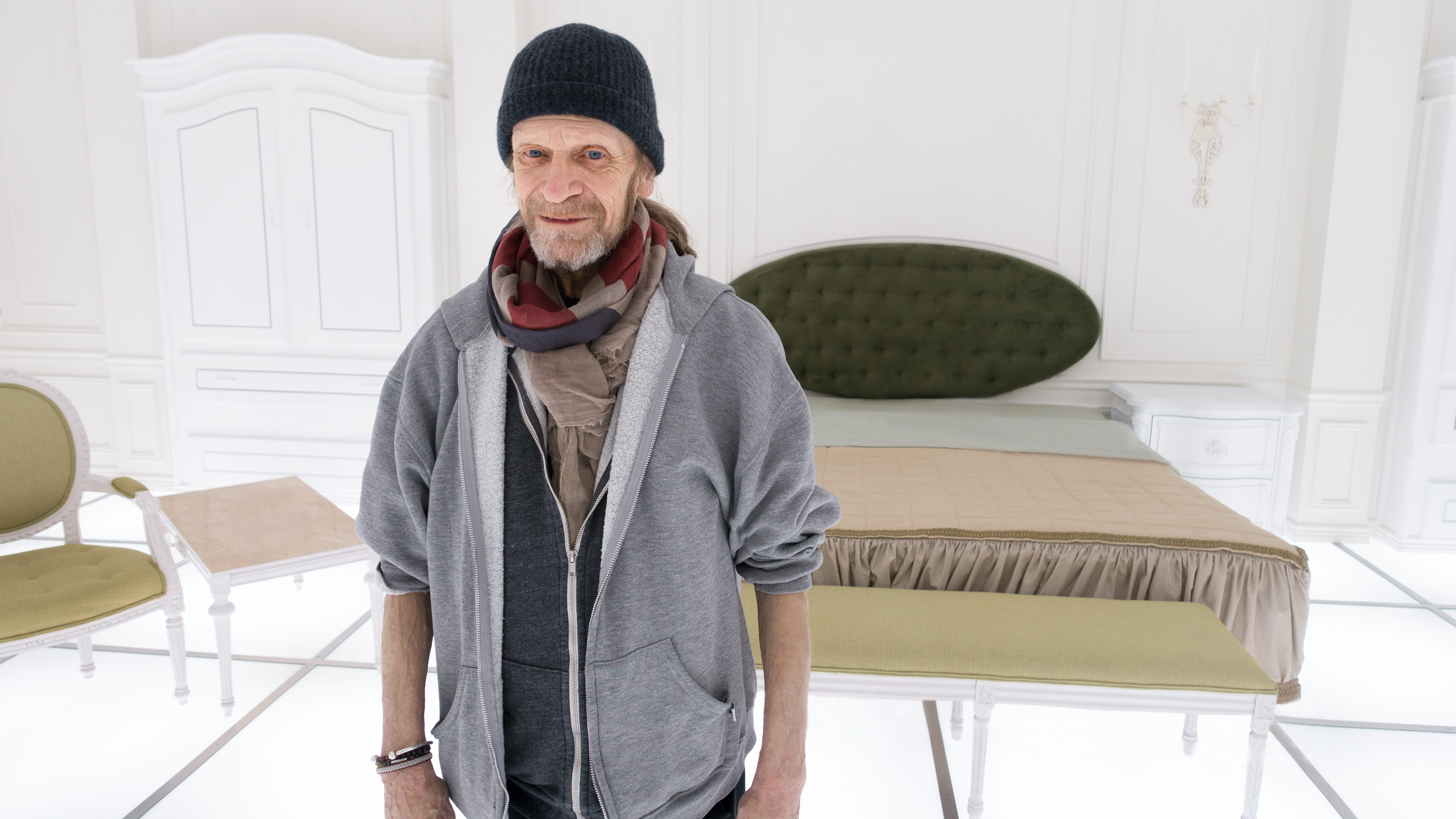 When Zierra decided to make a film about Vitali, he was in the middle of shooting a documentary about Eyes Wide Shut called SK13, so named because it was Kubrick’s 13th and final feature. The filmmaker is currently working on completing the project, but says he felt an urgency to get Vitali on camera out of temporary concern for his physical state several years ago. (The process of making Filmworker, he noted, “pumped [Leon] up.”) It’s not the first time that Vitali had suffered serious health issues. When Kubrick died, he had delivered his final cut of Eyes for the executives at Warner Brothers, Tom Cruise and Nicole Kidman to see. Postproduction and promotion on the film wasn’t nearly complete, however, so from March to October in 1999, Vitali and others worked ceaselessly to help release the film as faithfully as they could. The effort nearly killed him.

“Once he sent out the last translation and delivery to the last country, which I think was Turkey, he said he collapsed,” says Zierra. “This is when he realized that Stanley was gone. He had to be hospitalized. He weighed 65 pounds at one point. He had rages, thinking he was being attacked. He developed abscesses, all sorts of things.”

“I went into a real depression,” remembers Vitali. “It was time for Prozac. It was the first time in my life I’ve entered therapy. It just felt like, ‘What now? What now?’ Happily, there was quite a lot of ‘what now,’ because in a way, he’s not dead. I just finished this 4K transfer of 2001: A Space Odyssey and did the color timing on this 70mm print they have at Cannes. Just because Stanley had died, it didn’t mean his principles had died, too.”

“It felt like, ‘What now?’ Happily, there was quite a lot of ‘what now,’ because [of the films]. Just because Stanley had died, it didn’t mean his principles had died, too.”
–Leon Vitali

It’s a surprise to learn, in the middle of Filmworker, that Vitali was married and has adult children – or really, that he had any life at all beyond a shared obsession with Stanley Kubrick. That’s the mystery at the heart of the film: Why would a man of such abundant talent, with an already-established acting career, dedicate his professional life to a near-monastic devotion to another man’s art? Why so many sleepless nights, so much time away from family? And how did he put up with all the seemingly thankless gruntwork, like fussing over a Full Metal Jacket window display or the video box art for some faraway territory?

“It’s such a tough thing,” says Zierra, “because he has difficult days … where he feels like no one cares. Like he did all this, but what’s the point? But the more I got to know him, the more I understood why he had no regrets. At first, it was Kubrick above his head, always. Then slowly Kubrick disappeared and I started to see [Vitali] for who he is and admire him. [To him], it was about the journey. It wasn’t about cashing in at the end, you know? Even his children had a hard time with that, because it just never made sense to them. ‘Why do just you wanna be an assistant?'”

At one point in Filmworker, Zierra visits the Kubrick exhibition at LACMA, a massive assemblage of archival materials, scripts, costumes, camera lenses, and other assorted Kubrickiana from his long career in filmmaking. Vitali wasn’t consulted about the exhibit. (“It didn’t matter to me,” he insists. “I wasn’t hankering to be a part of it, or anything like that.”) But Zierra finds the symbolism telling. Here’s a man who worked more closely with Kubrick than anyone in the last stretch of his career, but once again was relegated to the shadows, the unacknowledged supporting player in a great artist’s life.

“We were inside,” says Zierra, “and he’s pointing out all the objects, like The Shining typewriter. He was looking at the stuff that he used to work with. He goes, ‘I used to sit on that couch, I used to use that typewriter.’ And I thought it was just so odd, for a guy to walk around with objects from his own life at an exhibit.”

Vitali thinks about it another way. In Filmworker,
he talks about the exhibit as his chance to finally say goodbye to
Kubrick – how he spent hours just
staring at the lenses and memorabilia that’s part of their shared past.
He also appointed himself as an unofficial tour guide. “I saw that thing
20 times at least,” he says. “People asked me to go with them, and so I
did. And it was interesting to do that because
everybody was receiving all the information in that exhibition in a
different way. And they wanted to know different things, had different
questions. It was great. I love being able to do that.”

Zierra
was just one of those 20-plus people – and so is anyone who watches the
film. It’s completely in character for a man so devoted to someone he considered a creative genius to redirect a profile
about himself into another
angle into Kubrick’s cmindset. (“It is a bit strange when someone says they want to make a film about you,” Vitali admits. “It feels like a giant public therapy session.”) There’s never a moment in the documentary when he seems bitter or regretful about not having his moment in the
spotlight or getting the credit he deserves. His proximity to greatness
was, and remains, enough to sustain
him.

As for those terrible days on set, when the shit hit the fan? “If [things] was going really well, then it was a sort of magic place to be,” Vitali says, “and we felt an absolutely beautiful air of excitement. And if it wasn’t going well, it could be murderous, like walking through treacle. It was a wonderful kind of up-and-down, all-embracing emotional experience.” For him, there’s no separation between the good, the bad or the ugly. It’s all part of the experience, one that Vitali says continues to this day with every film print he inspects frame-by-frame, every faded notebook he archives for posterity.

“Stanley is always there with me,” he admits, “[still] saying ‘Don’t you dare.'”