There is no shortage of action in Widows, director Steve McQueen’s whizbang, Chicago-set, female-led heist film that opened this month. Consider it Ocean’s 8 on an eightball. Still, when Cynthia Erivo shows up there’s a palpable jolt. As hairdresser-turned-getaway-driver Belle, her first moments onscreen are silent but riveting. Sporting a shock of close-cropped platinum-dyed hair, she works on a client in a South Side salon with the focus of an Olympic gymnast — all nimble fingers and pulsing biceps, and an eyes-in-the-back-of-her-head awareness.

A single mom who runs on street smarts and instinct, Belle is all fight, no flight. That’s by design. “I wanted to make sure you didn’t see her as this weak or flighty woman,” says Erivo, a compact, 5-foot-tall dynamo. “Every time you see her, I wanted her to give you energy. She’s not apologetic and she doesn’t cower under anyone.” In a tense face-off with Viola Davis’ ringleader, Belle refuses to back down. “She could run and hide,” Erivo says, “but that’s not what she does. That’s not what I do. I don’t run and hide very often.”

'Widows' Review: Four Women, a Heist and One Hell of a Ride

On the contrary, Erivo sprints headlong at every challenge. A 31-year-old graduate of the Royal Academy of Dramatic Art, the London-born actress has already notched a Tony, a Grammy and an Emmy Award for her work as Celie in The Color Purple on Broadway. (If she wins an Oscar in the next seven years, she will be the youngest star ever to achieve EGOT status.) It was backstage at that show in 2015 where McQueen first met Erivo — and cast her within five minutes, despite the fact that she’d never acted on film before. She’s since been cast in four other movies, including October’s Bad Times at the El Royale, where she shared the screen with Oscar winner Jeff Bridges and, playing a singer, showed off her powerhouse pipes a cappella.

“There is nothing she can’t do,” says McQueen, who calls Erivo the next Barbra Streisand for the breadth of her talent and the impact he believes she’ll make on the entertainment industry. “There’s a determination. She will do whatever she has to, train and train until she’s the best.”

This tenacity extends to personal goals as well: After Erivo decided she wanted to one day run a marathon in under four hours, she did. On her first try. Three hours and 57 minutes, to be exact. Plus, she sang the national anthem at the start. (Competing for most exhausting day imaginable: the Saturday during training that she ran the Brooklyn Half-Marathon in the morning, then reported for regular duty on Broadway: a matinee followed by an evening show.) A fraction of her shame-inducing physical fitness is on display in Widows, as she sprints through a ritzy Chicago enclave on a reconnaissance mission, scaling walls, and later introduces a punching bag to the business end of her fists. No particular level of conditioning was required for the role; Erivo just enjoys working out — hard.

While she calls exercise a “meditation,” Erivo also wields her passion for it as a public service announcement, routinely posting video clips of her grueling workouts to Instagram, hoping to inspire her followers — and perhaps a few casting directors. “My body is muscular, and I won’t shy away from it, which a lot of women are forced to do. I want to be an example for women who are afraid of their own strength and fitness to embrace it,” she says over a lunch of salmon and salad at Brooklyn’s Dumbo House, a private club overlooking the East River. “And I don’t want to be given a role that requires I pretend I can do something when, if I put my mind to it, I actually can do it myself, without someone having to step in for me. I want to be able to do the Tom Cruise roles, the superhero roles. I’m not going to pretend I’m not strong.” 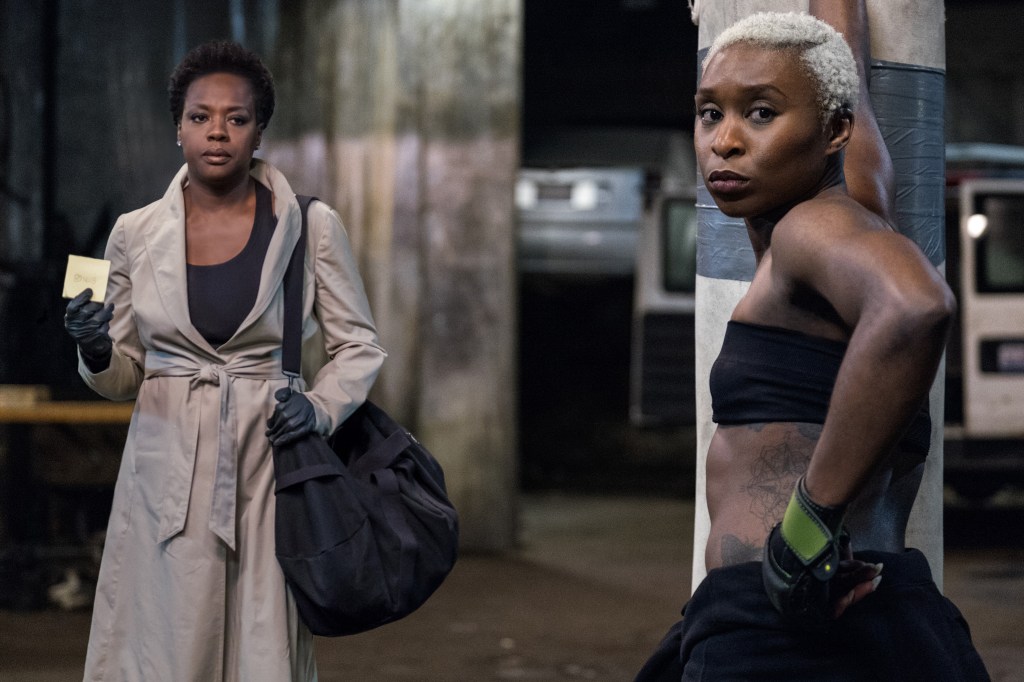 She’ll get her chance to live up those words with her latest undertaking — starring as Harriet Tubman in a biopic that began filming in Virginia in October. The role plays to Erivo’s physical strengths — “I’m going to be carrying people and things, riding horses, running barefoot through the woods, all of that,” she says — but the weight of Tubman’s legend has her “petrified.”

“She’s this mythical superhero,” she explains. “People know about her achievements, but they don’t know of her, the woman. My task is to tell the story of the human being that became the superhero.”

Making matters tougher, the job carries the burdens of a complex history some feel Erivo has not earned the right to represent. When her casting was announced, online backlash was swift in some circles, with many questioning whether an English woman was qualified to portray this most singular American (despite the fact that Celie Johnson is another character firmly rooted in the American slave experience). It’s a concern Erivo understands and hopes to meet head-on.

“It is incredibly humbling to think that anyone thinks I am responsible enough to take care of those entities as an English girl,” she says. “But it also hopefully speaks to the fact that I can understand that experience as a black woman. And I do not take it lightly. I do the work because I want to tell the stories as truthfully as I possibly can. And I want those who are deeply connected to those stories to know that I don’t take that for granted.”

Growing up, Erivo was drawn to the arts from a young age. She has said that the first time she sang in front of people, at the age of five, she realized it made them happy — and that made her happy. From that point on, her path was chosen.

Her mother, Edith, a Nigerian immigrant who worked as a visiting nurse, was unambiguously supportive of her older daughter’s ambitions. Her one piece of advice: Make sure you work hard. Erivo’s younger sister, Stephanie, also bought into the family credo. Today, she works in the sports sciences and public health in the U.K., encouraging preventative wellness through, yes, exercise. Erivo talks with both women every day.

Erivo’s father, on the other hand, was never much in the picture. During the girls’ occasional visits with him, he would often disappear into his room and close the door, leaving them to play on their own. When she was 16, Erivo says, he disowned her at a London Tube station. “He said, ‘I don’t want to see you or your sister again,’” she recalls. “And he stuck true to his word.”

“We all have small things that affect our lives,” she says haltingly, searching for words. “I don’t know that that is a trauma. And if it was, I learned how to deal with that trauma.” She pauses. “I think it comes out in the roles I choose and the decisions I make.”

Erivo is, unsurprisingly, the type of person who keeps a running list of specific goals. Just a few years ago, she wrote down what she calls “fantastical things” and says she was shocked to tick off several of them in record time: be in a Broadway show; win a Tony; win a Grammy; attend the Met Gala, which she’s now done three times; sing on the Kennedy Center stage. She demurs on this point, but it’s clear that none of these accomplishments can be chalked up to luck. Timing, maybe. But to attribute her success to the whims of divine intervention would diminish the grit and work ethic that are her calling cards. Those qualities, combined with her immense natural talent, have turned her into something of a supernova.

They also imbue her with bona fide, dictionary-definition confidence. Though she’s not yet paparazzi-famous, when Erivo strode into the restaurant for this interview — self-styled in ripped jeans, open-toed heels, giant hoop earrings, a T-shirt emblazoned with the words “Good Energy” and a purple, floral-print kimono — heads turned. The woman is so self-possessed it’s almost disorienting.

Erivo will appear in at least two other films next year: Chaos Walking, a sci-fi adventure set in a dystopia where there are no women, and Needle in a Timestack, another sci-fi, this one about time travel and directed by John Ridley, the Oscar-winning screenwriter of 12 Years A Slave. Whatever downtime she has in between promoting those movies and accepting invitations to sing — in September, she took the stage for an Aretha Franklin tribute at BET’s Black Girls Rock! awards and performed at the Baltimore Symphony Orchestra’s opening gala — Erivo will spend it in Brooklyn with her roommate, a maltipoo named Caleb, and her boyfriend of a little more than a year.

Her list of goals, meanwhile, is growing. While filming El Royale, Bridges told her he’d made nearly 70 films over his career; making 70 films went on the list. She’s working on an album of original music (sorry, Broadway fans, but Erivo is explicit that “it’s not gonna sound like a musical, because that’s not how I sing outside of that [context]”). She also wants to have her own production company. And she’s already been asked to write a book. Specifically, she was offered a deal for a memoir, which she dismissed out of hand because, “I’m only 31, I’ve only begun my life!” However, she would consider writing something more in the vein of self-help. “I would love to use the book as a way to give people permission to follow a dream,” she says, “to be steadfast in a belief and to know that literally anything is possible. An-y-thing.”

As for dream roles, icons from Tina Turner to Serena Williams and Cleopatra make the list. Could she ever play a damsel in distress? Erivo thinks for a beat. “I haven’t tried it yet; I don’t know!” she says, a bedazzled nail tapping her cheek. “It depends on what kind of damsel she is and why. It would be interesting to see if I could do it.” She pauses. “See: Now I have a challenge.”