It’s a good thing for moviegoers that Nora Lum was, in her own words, “the worst” at her chosen art: playing the trumpet. “Oh my god, I was horrible,” says the Queens-born actress known as Akwkafina, calling from China in June, where she was filming an as-yet-untitled movie with director Lulu Wang. Though she attended New York City’s prestigious LaGuardia High School for performing arts (a.k.a. the Fame school) specifically to study the horn, the next Dizzy Gillespie she was not. Says Lum, “My dad went to a parent-teacher conference and my teacher told him, ‘Y’know, for some students, the best thing that ever happens to them is getting into LaGuardia.’”

Thankfully, for Lum, that turned out not to be true. Instead of ending up in a jazz quartet, she’s hit the big screen in two of this summer’s biggest films. To play stealthy pickpocket Constance in Ocean’s Eight, alongside Sandra Bullock and Cate Blanchett, she was paired with a sleight-of hand coach and became proficient enough that she can snatch the watch off your wrist. For her role in Crazy Rich Asians (opens today), the highly anticipated adaptation of Kevin Kwan’s best-seller set in high-society Singapore, no special training was necessary. She imbued her character Goh Peik Lin, the bottle-blonde bestie to the lovelorn Rachel (played by Constance Wu), with a hip-hop swagger and a Miley Cyrus-meets-New Jersey patois, and improvised her way to some of the movie’s biggest laughs. (See: her gleeful gatecrashing of a party at Rachel’s billionaire fiancé’s opulent family estate.) It’s a singular, unforgettable take on the often-forgettable BFF part.

So how’d she get from LaGuardia misfit to blockbuster breakout? The fastest route possible: YouTube. Despite her teacher’s bleak assessment of her musical talents, Lum channeled a love of hip-hop into songwriting, unwittingly launching her career with the 2012 release, at the urging of a friend, of her first rap video, “My Vag.” Thanks to lines like “My vag a chrome Range Rover, your vag hatchback ’81 Toyota,” it went viral (2,632,000 views and counting). And while it got Nora Lum fired from her job as a publicity assistant at a publishing company, it made Awkwafina an underground sensation.

“That is what I did right, in my whole life,” Lum says of posting the video. “I didn’t expect anything to happen. There was no game plan. I had nothing to lose, y’know. And to this day, everything that has happened to me — my first movie gig, my first non-music gig — was all from that.”

That’s not an oversimplification. When it came time to cast Crazy Rich Asians, director Jon M. Chu didn’t need an agent to slide him a Nora Lum headshot. “I’ve watched her for years on YouTube, in her rap videos, and she had a show where she interviewed people in a bodega,” Chu says. “I was always a fan but had nothing to put her in, because she’s just such a unique creature.” Though the character of Peik Lin is very different in the book than the one on-screen (“She comes from money, and that’s pretty much where the similarity ends,” he admits), once a friend brought up Awkwafina, “I couldn’t get her out of my head,” Chu says. “In a romantic comedy, you get very earnest, and you need someone who can pop it, who feels confident and different, not the same old sidekick.”

Chu was so sure that Lum was right for the role, he included her name in his pitch packet to Warner Bros. Not that he told her that. “We were coy with her,” he explains. “We had to do our due diligence and see everybody, but ultimately we knew she would hit it out of the park.” He even had screenwriter Adele Lim start writing to her voice long before she was cast. “With Awkwafina, I didn’t want to give her an accent, I didn’t want to lay anything on top of her spirit,” he says. “She’s a truth-teller. I wanted her to be the funniest, harshest she could be.”

With that goal in mind, Chu also gave Lum free rein to improvise — a privilege she ran with. The result: Some of Crazy Rich Asians’ most uproarious scenes and, Lum notes with a mixture of pride and sheepishness, the movie’s only F-word. She apologized right after it slipped out, but Chu says the take was just too funny to cut. “The cool thing is that Peik Lin was literally born on-screen,” Lum says. “Jon was never trying to steer me. A lot of times you do improv and it just goes into the heavens, but a lot of it made it into the film, and that was really, really cool.”

In conversation, Lum toggles between the laid-back, unfiltered wisecracking Awkwafinatics love and a more contemplative, sincere side that may surprise those who only know her on-screen persona. Despite her bottle-rocket rise to fame, she still feels very much connected to the struggling twentysomething who just a few years ago took jobs at a video store and a sushi restaurant to pay the rent while she worked on her music and honed her comedic persona through her Verizon Go90 variety show, Tawk. Filmed in New York City delis and subway cars, it featured skits and interviews with comedians such as Pete Davidson and Hasan Minhaj, as well as a regular segment starring her sassy grandmother, whom she dubbed “Grandmafina.” When she’s not on location in Barcelona (for the upcoming boarding school-set fantasy Paradise Hills) or walking a red carpet in Hollywood, she returns to the same Greenpoint, Brooklyn, apartment she’s been living in for years.

“It’s rent-controlled,” says Lum, an only child who, after her mother died when Lum was four, was raised largely by Grandmafina. “Sometimes I’m sitting on my toilet, looking at my bathroom, and I’m like, I can’t believe this is my house, dude. This house is fucking gross.” Laughing, she rattles off a laundry list of its lowlights, including “foam, office-tile” ceilings and a secondhand Ikea futon, adding, “I need to upgrade.” 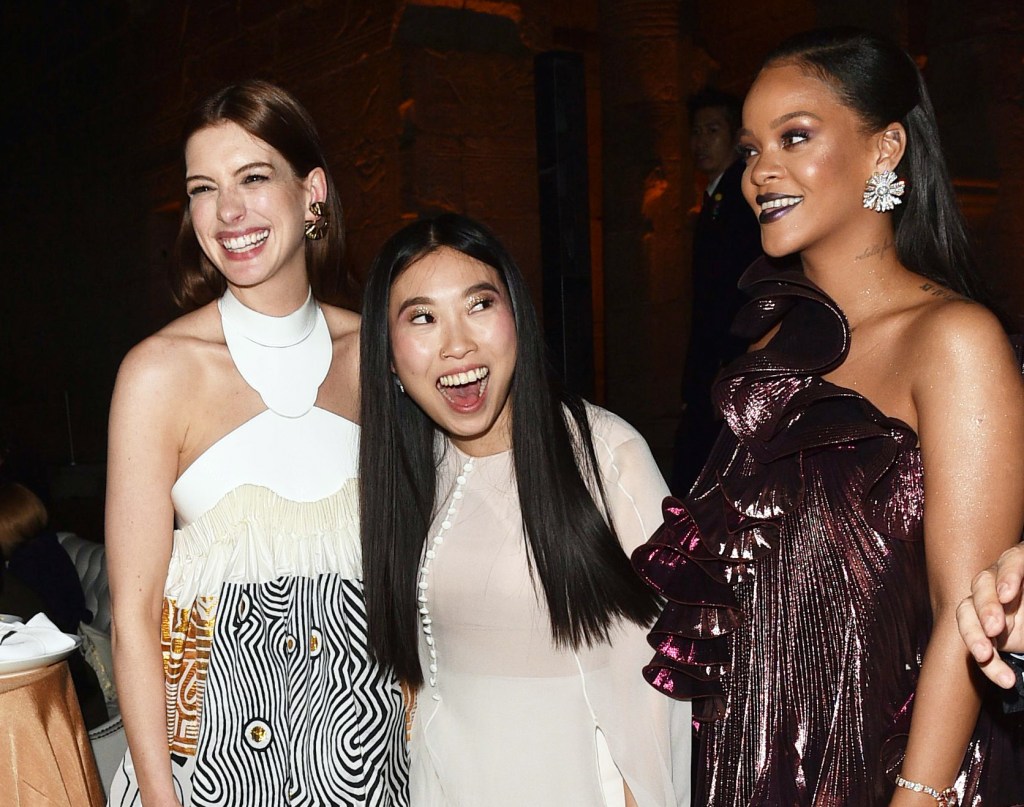 She’s had a few flashes of amazement at the turn her life has taken, like when she was shooting a scene for Ocean’s with Rihanna in Manhattan and realized she was across the street from the publishing house that had axed her. “Moments like that, I know I can tell myself, You’re OK now,” she says. But then she quickly reverses course: “The funny thing is, I never feel OK. Like everyone says, ‘This is the best year of your life! Your life is never going to have any stumbles [after] this!’ But I don’t want to think like that.”

To that end, she’s something of a workaholic. In addition to filming three movies set to bow in 2019 (or recording, in the case of The Angry Birds Movie 2), Awkwafina is fine-tuning her sophomore album, the follow-up to 2014’s Yellow Ranger. She considers music her first — and longest-running — love. “I’ve been with hip-hop since I was extremely young,” Lum says. “J Dilla, DJ Rashad, I worshipped these people. I had a Mac Book and GarageBand and started producing beats when I was 16 years old. By the time I was 18, I had 500, 600 songs I had produced or sung or rapped on, sitting on a hard drive.” Even now, making beats is her escape, the first place she turns for relaxation when she gets back to her hotel after a long day on set.

“People think I’m a parody rapper, like a Weird Al type, but the tragic thing is, I would love to be considered a serious musician,” she says. “Then I did a song called ‘Queef’ and that kind of shattered it. But that’s how it goes.”

That mix of drive and humility served Lum well on the Crazy Rich Asians set. Despite her being relatively inexperienced and self-conscious at the start of filming, Chu says Lum attacked the role, going “all-out” to bring Peik Lin to life. “It was so fun to watch her grow and gain confidence,” he says, “to see an artist become the artist throughout a shoot.” But as much as he’s a fan of what Awkwafina brought to the role, Chu appreciates Nora more. “She’s the kindest, nicest person. Yes, she’s always ranting about one thing or another, but the other side of her is what I love most, actually,” Chu says. “She’s an observer, soaking everything in at every moment. It seems like she’s always talking, but actually she’s always listening. You can tell because she says brilliant stuff that you can’t know if you’re just always ‘on.’ So my favorite part of her is her sensitivity and her anxiousness, because you know there’s a real person there.”