There’s a strong argument to be made that Uncle Junior is The Sopranos’ funniest character. He was the writers’ favorite, according to David Chase, because he was “very direct and outrageous.” Whether he was insulting whoever was nearby, telling off-color jokes, or just taking a spill in the shower (“Ah! Your sister’s cunt!”), the famously bespectacled old crank was guaranteed to bring a moment of levity to the show’s often dark proceedings.

Corey Stoll is better known for drama than comedy, but the brooding characters he’s played in everything from House of Cards (the alcoholic Congressman Peter Russo) to Ant-Man (the villainous Darren Cross) and even Julius Caesar (he was Brutus in a New York presentation of Shakespeare in the Park) have plenty in common with Uncle Junior — simmering resentment and constipated rage, for starters. That’s a vein Stoll taps liberally in his performance as a younger version of Corrado Soprano in the new prequel film The Many Saints of Newark.

Stoll’s Junior is as quick to take offense as he is to attack in kind, and in a few scenes, he even gets to recite memorable turns of phrase that actor Dominic Chianese used on the original series. “For the superfan, that could be a bit of pressure, to say those authentically,” Stoll acknowledged during a recent Zoom interview. “But I just felt like it was this incredible gift that David gave me to be able to dip into that mythology a little bit.”

Stoll, who can next be seen on the small screen in HBO’s remake of Ingmar Bergman’s Scenes From a Marriage (September 13th), and on the big screen in Steven Spielberg’s West Side Story reboot (December 10th), spoke with Rolling Stone about making one of TV’s most iconic characters his own. 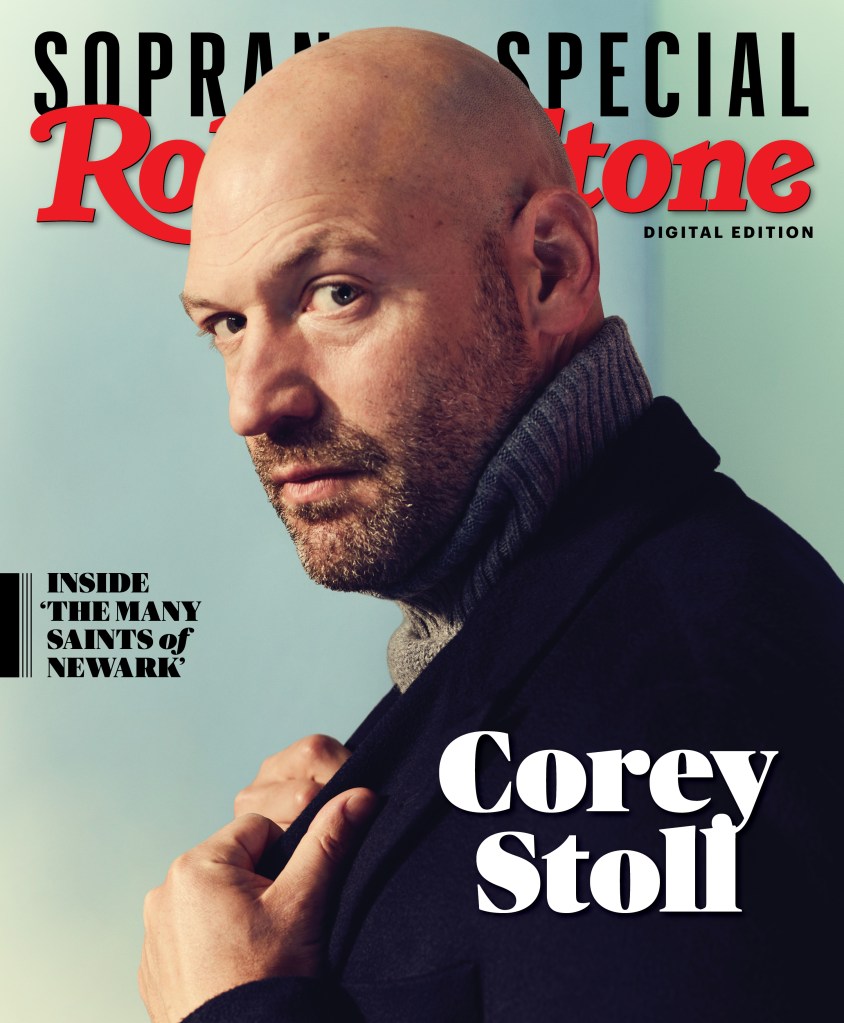 Corey Stoll photographed by Joe Pugliese for Rolling Stone. Produced by Walaa Elsiddig and Shelby Gordon. Grooming by Melissa Dezarete for Kalpana US. Styled by Luis Campuzano. Coat by Hermes. Turtleneck by Stoffa.

Did you watch The Sopranos back in the day?
I’ve seen every episode at least three times. Saw it when it first came out, and then when my wife was pregnant, she had never seen it, and we spent that summer going through it. We had to slow down a little bit. It’s a very stressful show. We didn’t want her to give birth prematurely. And then when I was cast, I rewatched it all really quickly — which I really don’t recommend. I definitely recommend anybody see it, because it really holds up. But give yourself some time. Don’t watch three or four episodes a night. It’s just brutal.

What did you like about the show back then?
It was the beginning of when TV was starting to be respectable. Growing up, I had a picture of Martin Scorsese on my wall when other people had Pamela Anderson. That’s the world I wanted to work in: film! [The first time I saw The Sopranos] I was somewhere in a hotel room, and it was on HBO, and I said, “Oh, my God, this is as good as any movie out there.” I was hooked immediately. Just the humor and the intelligence and the scope of the show, that you could have this family drama, and this crime drama, and it pulls back wider and gives you a broader, more sociological thing. Every scene was so well-written, and everybody was so well-cast. It just worked.

What did you think of Uncle Junior as a character when you were originally watching?
I loved him! He got so many of the best lines. And as a character, he deepened as the series went on. He started out as this somewhat buffoonish villain. And if you take it all the way to the very last scene that he has, there was this incredible pathos. There’s a real deep sadness in him that’s undeniable.

What was your reaction when you heard about the possibility of being in Many Saints?
I said, “Yes!” My agent was like, “We think it’s a good role?” I don’t think they knew [who it was]. And I started reading it and went, “It’s gotta be Junior.”

Why did you think it would be Junior?
It makes sense. I think I’m good casting in a lot of ways. I’m very different from Dominic, but aside from obviously being bald, I play a lot of characters who have a villainous side but also a real humanity to them. And a lot of protagonists that I play have a weakness that leads them to not be exemplary people.

Why do you think you keep getting those kinds of roles you just described?
Must be something about me, I don’t know [laughs]. I think I’m drawn to that kind of complexity. 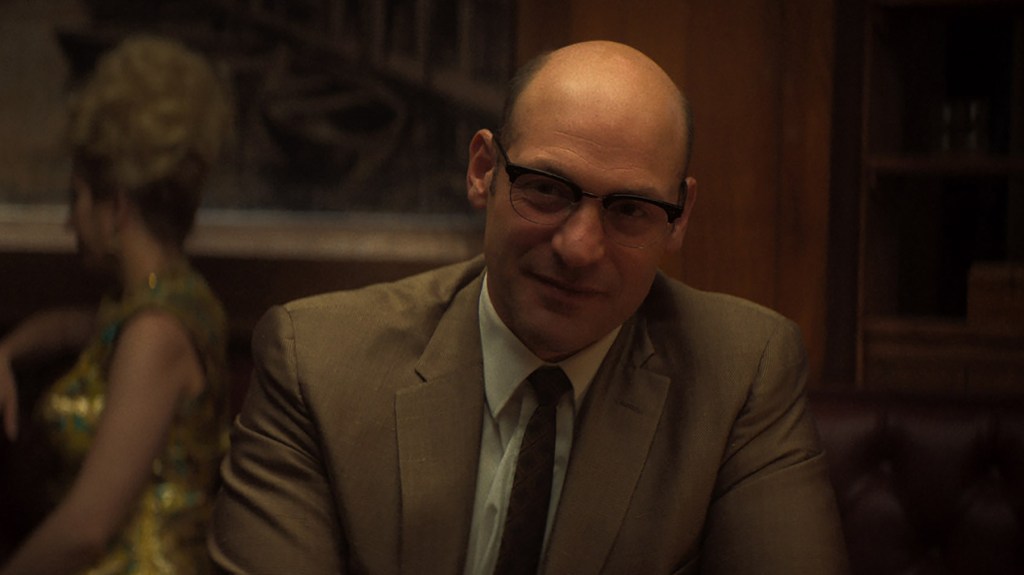 Stoll as Junior Soprano in “The Many Saints of Newark.”

A lot of the movie’s actors have shared similar stories about being given coded material at first. How much did that stuff resemble the actual shooting script?
There was a lot of rewriting. It was very different. I think they had a lot of conflicting pressures on this project. Honestly, if David Chase was not the one writing it, it could have been a mess. Because there are these fans who are so loyal, and it’s such a rich mythology, that you don’t want to mess it up. But you want to get in new people. The fact that they had David at the center of it, calling the shots, really gave it an authenticity and a spine.

David is famously paranoid about spoilers — he even had spies on The Sopranos set to sniff out leaks. But Marvel may be even more paranoid. Where was that sense of secret-keeping more palpable: on Many Saints or when you joined the MCU for Ant-Man?
The MCU. I could actually get a paper copy of the script for Many Saints. For the MCU, it was this thing with a link, and I’m sure they could tell exactly how many seconds you were online looking at it.

What did you pick up from watching Dominic Chianese play Junior in the series that you wanted to incorporate into what you were doing for Many Saints?
First is just the mannerisms, the vocal inflections. That stuff, you have to get on a certain level but then reverse-engineer it. How would this sit in a younger man? What has he developed in his personality since the events of this movie that we then see in the series? It was a rare gift to have 86 hours of material [to work off of]. Dominic isn’t in all of that, but he’s in a lot of it. The dialect coach made me this supercut of all the jokes that Junior tells. I listened to it over and over again. He’s a great joke teller! Uncle Junior has this glint in his eye. I think there’s a comfort that Dominic had in his body that my Junior hasn’t quite developed yet. Junior has, which so many villains share, a feeling of being passed over. And a feeling of entitlement [about what] he doesn’t get, in terms of power and respect, both within and without the family. That was a recurring theme: There was always some moment of insult to his pride.

When we see Uncle Junior in flashbacks on the show, played by Rocco Sisto, he still has some hair. Did they talk about you wearing a hairpiece of some kind?
We did a whole wig fitting. It looked like Michael Caine in the Sixties, this sort of bushy, longish hair. It was kind of cool. There was a moment where we were gonna show this huge transformation from the Sixties to the Seventies, [but] it’s just not a big enough span of time. He’s already an adult. He already has this sense of style, and he’s not gonna lose his hair that quickly. We just went with what I had.

As a fan of the show, what was it like being in scenes where Vera Farmiga is so perfectly capturing Livia, or John Magaro sounds so much like Silvio?
I didn’t fall into a dissociative state where I didn’t know where I was, but I had constant fanboy moments. If this was a straight-up sequel, or just previous to the events of the series, I think it would have been a lot weirder. But the fact that it was a whole other world, and it’s a movie, and the storytelling is very different … That helped give us all a little bit of ownership of the characters. There’s a real epic quality to this that is very different from the TV show. There’s a grandeur to the way this story is told.

At this point in your career you’ve done so many different kinds of movies and TV shows. Are there particular projects you get recognized for over and over when you’re out in the world?
It’s really funny — sometimes, I feel like I can predict before they open their mouths what it’s going to be. “OK, it’s going to be House of Cards.” Or, “That’s gonna be The Strain.” Non-Stop, the Liam Neeson movie, I actually get a lot, because it’s on TV all the time. And then there are the people who are really into me as Hemingway [from Midnight in Paris]. When Billions was on the air, it was that, and I’m sure it’ll be that again when it’s back this fall.

You also have Steven Spielberg’s West Side Story remake coming up, where you’re playing Detective Schrank. What was that experience like?
It was great. I was the guy who got to come in, not have to sing or dance, or really rehearse. And it was just all these amazing performers who had been training and rehearsing for months before I even showed up. So it was really a wonderful vibe on the set. A lot of really young performers, it was their first time on camera, a Steven Spielberg movie. There was a real excitement, and a joyous energy on that set. I got the feeling that Steven was feeling it, too.

How did that manifest itself?
I’ve never worked with him before, so I don’t know what to compare it to. But he was ebullient. He really seemed inspired by the energy of the singers and the dancers and that sort of storytelling.

If they had wanted you for one of the musical roles, can you sing?
No. I mean, I could’ve done it, but I don’t think people would’ve wanted to spend $15 to go to the movie theater to listen to me sing.

In This Article: The Many Saints of Newark, The Sopranos