The Complete History of the Joker, From Comic Books to the Big Screen - Rolling Stone

Laugh it up, film fans! Todd Phillips and Joaquin Phoenix’s Joker is almost upon us, ready to unleash a wave of crime — and think pieces — the likes of which Hollywood hasn’t seen since Heath Ledger terrorized Gotham City in The Dark Knight over a decade ago. But the story of the most infamous villain in Batman’s rogues gallery is itself as interesting as any of the character’s adventures either on screen or the printed page. Here’s a quick guide to the madcap history of the Caped Crusader’s deadliest enemy ….

An Origin Shrouded in Mystery
The Joker debuted in Batman #1, the Spring 1940 launch of the Dark Knight’s dedicated comic-book series; it also revealed the superhero’s origin for the first time and contained the first appearance of Catwoman. (Batman first appeared in a separate series, Detective Comics, which gave DC Comics its name and in which he still stars to this day.)

But the creation of the Clown Prince is shrouded in controversy, with the three men involved — writer Bill Finger and artists Bob Kane and Jerry Robinson — each offering a different account of how the Joker came to be. The exact order of events varies depending on who you believe, but in essence, the character was a hybrid of influences. Robinson produced a joker playing-card design. Finger provided inspiration in the form of a clown-face logo from Coney Island and, crucially, a picture of actor Conrad Veidt playing the disfigured, permanently grinning title character in the 1928 horror film The Man Who Laughs. Both Robinson and Kane, who for decades received sole credit for the creation of Batman, designed the character on the page, while Robinson and Finger helped develop the concept of the Joker as Batman’s nemesis. The result was a villain unlike any of the gangsters and mad scientists Batman and his recently added sidekick Robin had ever faced before.

Toronto 2019: 'Joker' and the Tears of an Intellectual-Property Clown 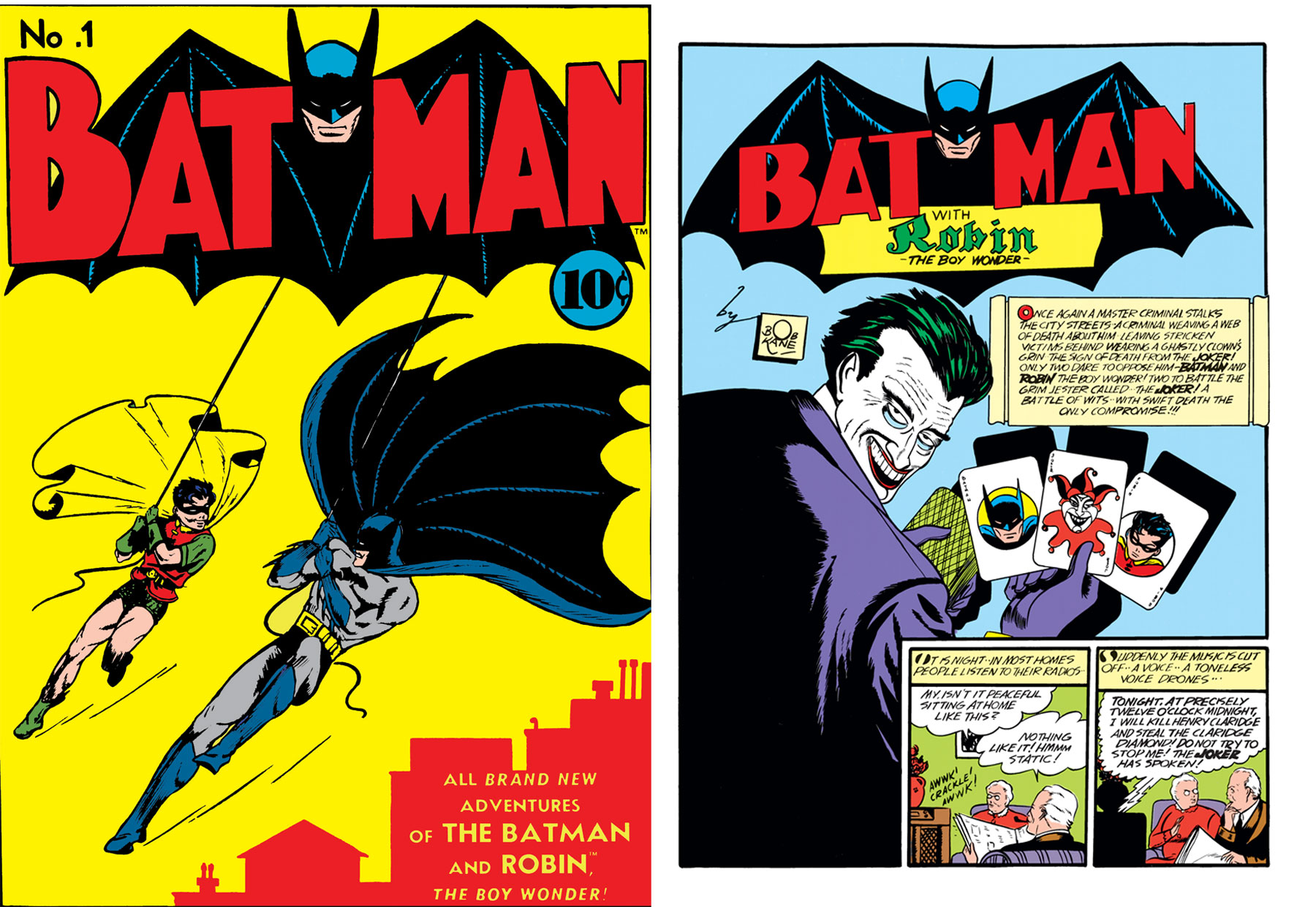 From Sick Jokester to Merry Prankster
In his first outing, the Joker is a cold-blooded maniac with an unnerving smile, who goes on two separate murderous crime sprees before Batman brings him down. The Joker’s “venom,” a poison that leaves a macabre rictus grin on its victims faces, made its first appearance in the character’s very first rampage.

But the killings stopped in 1942, by which point the Joker was one of Batman’s most popular and frequent opponents. After that, his crimes evolved into traps and heists that were elaborate, comical, and largely harmless — see Batman #44 (1946), in which the Joker wins big at a casino and is inspired to build a huge slot machine to try and off Batman and Robin by dropping giant coins on them. (When that fails, he tries to crush them with massive dice.) His tendency toward such spectacular set pieces grew even more pronounced after the rise of the censorious Comics Code Authority in 1954.

During this transitional period in the character’s history, Bill Finger devised his most frequently cited origin story. Published in 1951, Detective Comics #168 revealed that the Joker was once the Red Hood, a masked criminal who fell into a vat of acid while attempting to escape from Batman. When he emerged from the cauldron, the villain was cursed with green hair, corpse-white skin, and that unnerving perma-grin. It was this account of the Clown Prince’s creation that Alan Moore and Brian Bolland would draw from in their seminal 1988 graphic novel The Killing Joke.

Bam! Pow! TV Icon!
The Joker had largely faded into obscurity when pop-culture superstardom came calling. The campy Clown Prince of Crime was the perfect fit for William Dozier and Lorenzo Semple Jr.’s pop-art Batman television show, launched in 1966. The most frequently recurring villain on the show, he was portrayed by aging heartthrob Cesar Romero, who famously refused to shave off his trademark mustache for the role and simply had the character’s greasepaint applied over it. 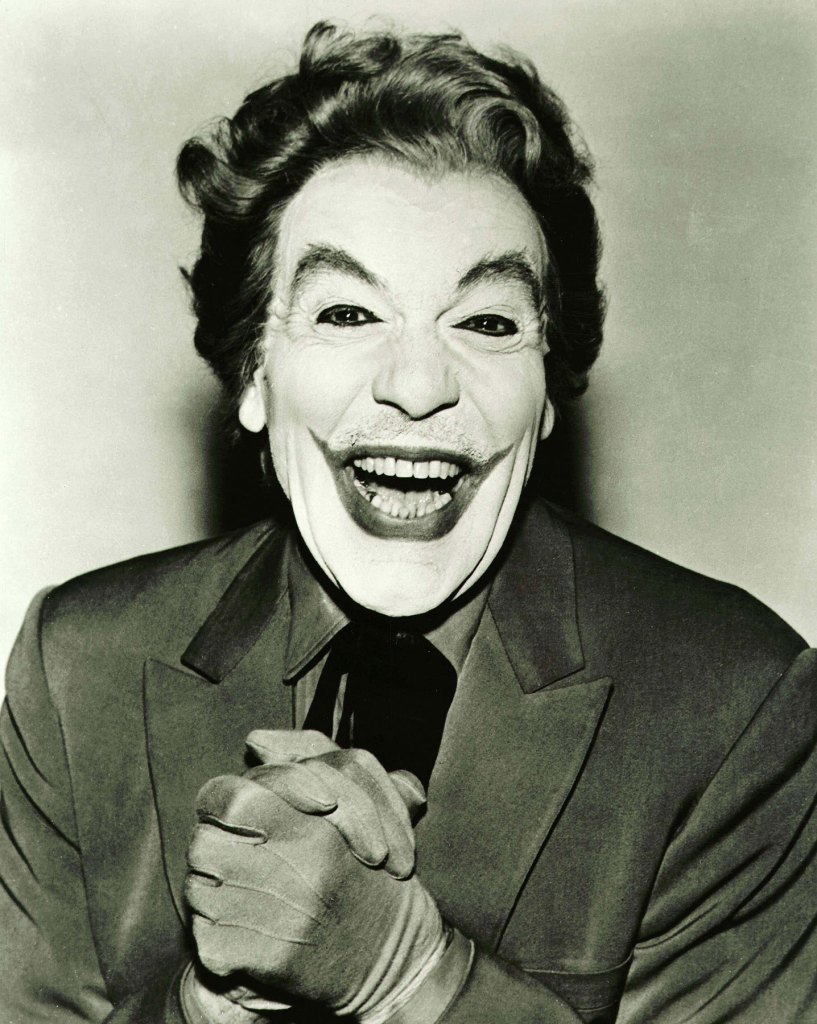 The Swingin’ Sixties Batman series has fallen in and out of favor with fans over the years, with some decrying its deliberate unseriousness and others praising its vibrant design and tongue-in-cheek performances. Romero’s Joker is a far cry from the sinister, slightly more psychotic version that we’re used to seeing now, to be sure — but his flamboyant theatricality has definitely influenced all subsequent portrayals of the Dark Knight’s archenemy.

A Return to Darkness
As the fervor for the TV show faded, the Batman comics, which had aped the series’ bam-pow-zap style during its run, began to drift back to their grim 1940s roots — a move made possible by the loosening of the Comics Code rules and a new generation of creative talent rising in the ranks. In 1973’s Batman #251, writer Dennis O’Neil and artist Neal Adams reintroduced the Joker to the comics page after a four-year absence. More importantly, they added murder back into his repertoire for the first time in over 30 years. The Clown Prince of Crime was once again free to traffic in carnage.

Teaming with artist Irv Novick, O’Neil would also introduce the Clown Prince’s mad court: Arkham Asylum, a mental institution for the criminally insane, which comics readers first got to visit in 1974’s Batman #258. The duo additionally helped to launch the Joker’s very first solo series in 1975. Whether teaming up with other villains like Lex Luthor, Two-Face, and the Penguin or striking out on his own, the character remained a mainstay of the entire DC Universe from that point forward.

The Eighties’ Fearsome Foursome of Joker Tales
The back half of the 1980s, however, were arguably the best period in the Joker’s publishing history. His hot streak began with Frank Miller’s genre-defining 1986 Batman opus The Dark Knight Returns, the story of a dystopian future in which both characters emerge from “retirement” more dangerous than ever. The writer-artist’s disturbing rendition made the villain a mass murderer who laughs once, and only once: When he frames the Caped Crusader for his murder by breaking his own neck following a pitched battle in an amusement park.

Back in the present day, the Clown Prince began eating away at his nemesis’ supporting cast like acid. Widely considered the best Joker story ever told (though its writer has largely renounced it), Moore and Bolland’s 1988 opus The Killing Joke emphasized the symbiotic relationship between hero and villain. Fresh from his revisionist triumph Watchmen, Moore reintroduced the “Red Hood” origin story, reimagining the man who would be the Joker as a down-on-his-luck comedian forced to pull a heist in order to support his pregnant wife. In one of his worst acts of violence yet, the psychopathic prankster crippled Gotham City Police Commissioner Jim Gordon’s daughter Barbara, aka the hero known as Batgirl. 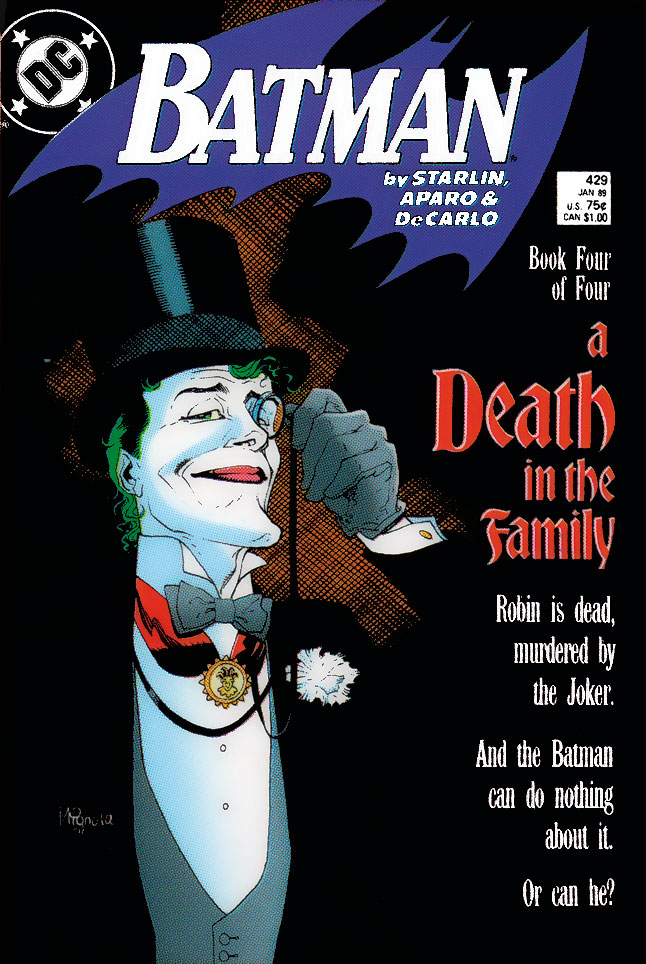 Batman’s primary sidekick Robin fared even worse that same year. In writer Jim Starlin and artist Jim Aparo’s A Death in the Family, the Joker brutally beat Jason Todd, the second kid to hold the position of Boy Wonder, with a crowbar before killing him in an explosion. Readers were able to call a hotline to vote for whether Jason lived or died; the Joker himself would have been pleased with the result.

The fourth entry in this new Joker canon — and namesake of the smash-hit video game series decades later — was 1989’s Arkham Asylum, from visionary writer Grant Morrison and multimedia artist Dave McKean. The pair portrayed the Joker as a nearly mythical avatar of mayhem in a story that saw Batman infiltrate the home of his worst enemies, nearly going mad in the process. It’s a smeary, hallucinogenic nightmare of a Joker story, and one of the more bone-chilling takes on the character.

The Clown Prince of Hollywood
Released in the summer of 1989 after insane levels of hype, Tim Burton’s Batman featured Jack Nicholson as the Joker, a role many thought he’d been born to play. It’s no slight against Michael Keaton’s idiosyncratic turn as Bruce Wayne and his costumed alter ego to say that Nicholson’s wisecracking, art-defiling crimelord deserved his top billing. His performance took the high-camp aspects of Romero’s take on the villain and added a sense of volatility into the mix; only Jack could take a line like “You ever dance with the devil in the pale moonlight?” and somehow make it seem genuinely unhinged and menacing. (When the acclaimed Batman: The Animated Series, which ran from 1992-1995 and was created by Paul Dini and Bruce Timm, introduced the character, who did they pick to give voice to the Joker? None other than Luke Skywalker himself, Mark Hamill. He always did have a bit of the dark side in him.) 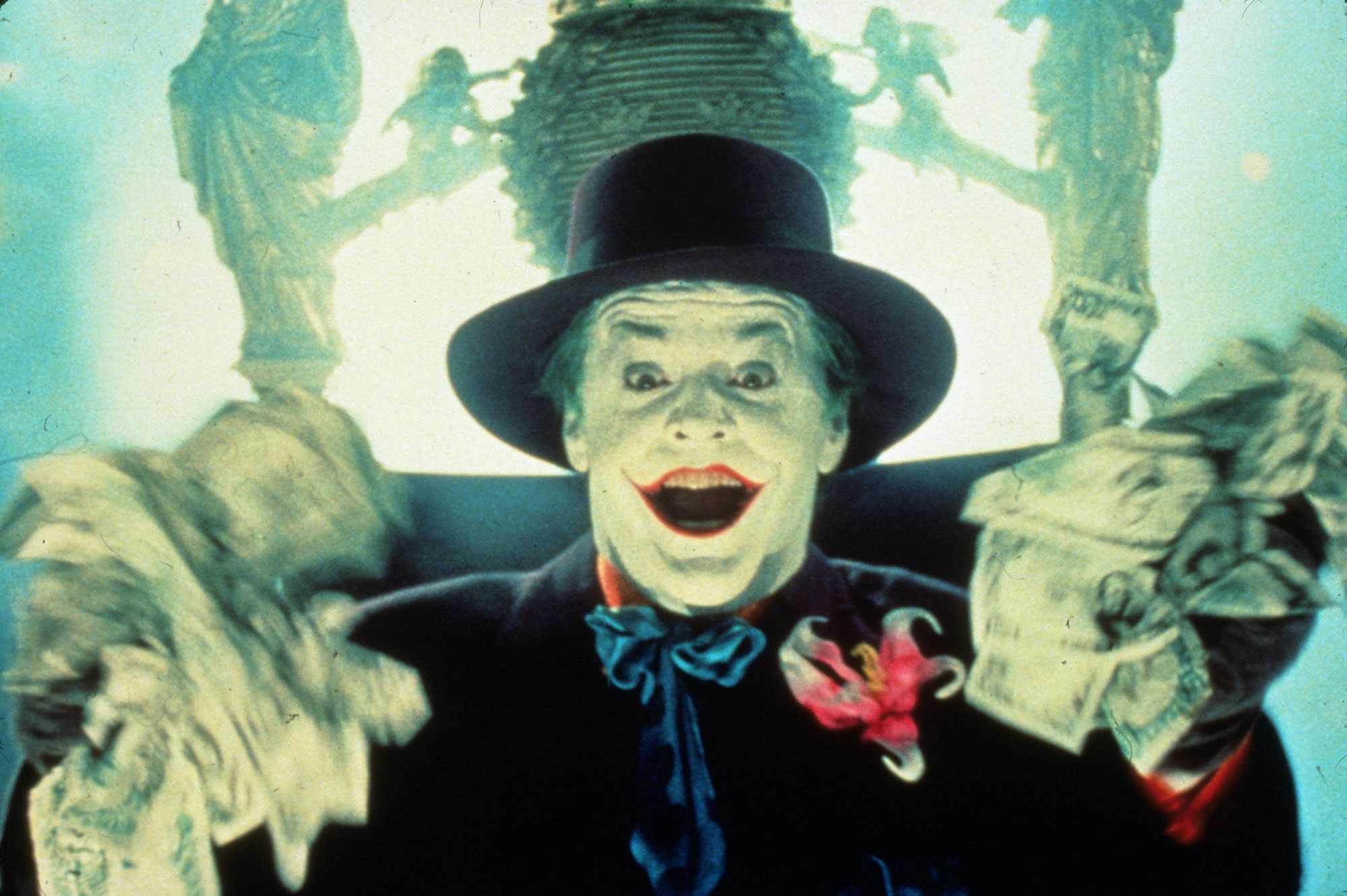 It took nearly 20 years, but Nicholson’s stint as the Joker in the minds of the masses was finally supplanted by the late Heath Ledger in Christopher Nolan’s gamechanging movie The Dark Knight. Ledger won a posthumous Oscar for his portrayal of the character as a heavily scarred anarchist, whose conflicting origin stories echoed the contradictory stories put forth in the comics. (The Killing Joke aside, DC has never officially designated the Clown Prince’s “real” origin, and theories range from abuse survivor to immortal being.) For many fans, it’s the definitive take on the character — a supervillain that’s one part mad genius, one part John Wayne Gacy and one part nihilistic agent of chaos.

In the next wave of DC Universe superhero movies, the role was inhabited by Jared Leto in David Ayer’s Suicide Squad. Lean, mean, and heavily tattooed, Leto’s supporting-player Joker adopted a sort of flashy narco-chic look as filtered through your local Hot Topic, a vibe his one-time love interest Harley Quinn, portrayed by Margot Robbie, only enhanced — to say the film underserved the iconic character would be putting it mildly. It did nothing to damage the character’s popularity among both comic and movie fans, naturally, but it was proof that playing the Joker required more than just a giggle and a grotesque grin.

And throughout this time period, the character has thrived on the comics page. In recent years, he’s survived having his face torn off, and faced competition from an alternate-reality hybrid of himself and the Dark Knight called “The Batman Who Laughs,” currently the comic-book DC Universe’s most influential evildoer. 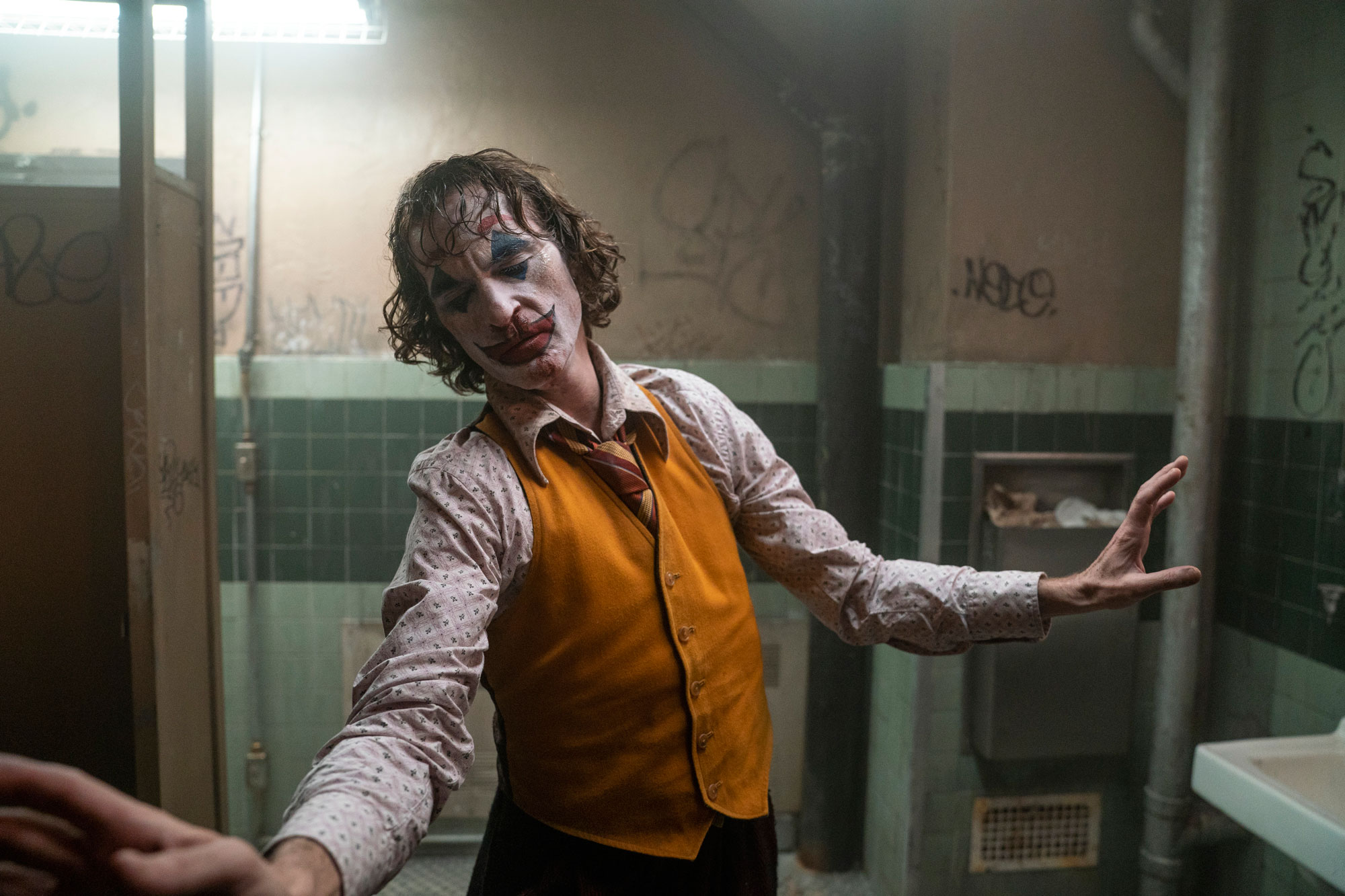 Now the Clown Prince is poised to conquer Tinseltown all over again in Todd Phillips’ Joker, starring Joaquin Phoenix. The director has made no secret of the film’s debt to characters from the filmography of Martin Scorsese — notably Taxi Driver’s Travis Bickle and The King of Comedy‘s Rupert Pupkin — while Phoenix can’t help but bring shades of past characters like The Master‘s mentally ill Freddie Quell to the table. The film won the Golden Lion at the Venice International Film Festival; early critical reception has been mixed. Would it really be a Joker movie if everyone were in on the joke?

Which brings us to the major difference between this Joker and all of his cinematic forerunners: He is now the hero, or antihero, of his own story. Romero, Nicholson, and Ledger’s versions of the character had Batman as a foil, while Leto’s played second fiddle to Harley Quinn. Phoenix’s origin-story incarnation, however, is just a sad-sack everyman who gets his start without a superhero in sight. Has the Joker become such a massive pop-culture presence that moviegoers will find themselves compelled by a Clown Prince without the crimes? He started out as a colorfully deranged, stone-cold killer. Now he gets the spotlight to himself. We can’t wait to hear the punchline.