Luca Guadagnino is sitting in a hotel in Beverly Hills, but his mind is back in Italy. The 46-year-old director is doing press duties for Call Me By Your Name, his rapturous romance about star-crossed lovers falling for each other over one memorable, wistful summer. (It hits theaters on November 24th.) And when he’s asked if he’s ever had a comparably whirlwind, sun-splashed fling – one that may have helped inspire his sensual, startling love story – you get the sense that the filmmaker has momentarily left the room. He is now somewhere back in his native country, imagining the sound of lapping waves and cicadas, maybe a light breeze blowing as dusk sets. He’s transported himself. Then, suddenly, he’s back.

“I haven’t got that experience,” says Guadagnino after a moment. “But I know the feeling, though. I know the smell of that feeling, which is a summery smell – the smell of the night, where you can’t sleep because you are restless.”

Set in gorgeous Northern Italy during the summer of 1983, Call Me By Your Name follows a talented, sensitive 17-year-old named Elio (Chalamet) who is thunderstruck by Oliver (Hammer), the dashing, charismatic but slightly guarded 24-year-old who moves into his villa to study with Elio’s decorated scholar father Lyle (Michael Stuhlbarg). Over a series of tranquil, humid days and nights the teenager tries resisting his slowly building feelings for this stranger, who seems too occupied with the local female beauties to notice. Eventually though, through a series of elegant glances and gentle gestures, a romance blossoms. But how long can it last considering that Oliver won’t be staying more than a couple months?

It’s the tyranny of limited time, and not social bigotry or the claustrophobia of the closet, that acts as the movie’s chief antagonist – an irony not lost on Guadagnino, given that he spent years waiting for the right moment to bring André Aciman’s 2007 novel to the screen. “When I started making movies, I was impatient,” he says.”I wanted to make things now. And then I was disappointed. We don’t have such a thing as development in Italy as you do in Hollywood.”

Initially, Guadagnino was just a consultant on the film; he was busy preparing I Am Love, his 2009 breakthrough movie starring Tilda Swinton. But the producers needed help nailing down the specifics of the period setting, however, so came on board to to offer some regional expertise. Guadagnino began working on the screenplay with Oscar-nominated James Ivory, with the expectation that the Room With a View director would be the one to make the film. During that process, the Italian filmmaker met the actors who would eventually play Elio and Oliver.

Chalamet, who had landed a small role in Interstellar and scene-stealing turns in indies such as Miss Stevens, was suggested by the actor’s agent. “He said, ‘This young man, I just signed him – you should meet him because he has the qualities to be Elio,'” recalls Guadagnino. “He was so vivid. He was so ambitious in his desire for excellence. He was restless, and yet he was a boy.” 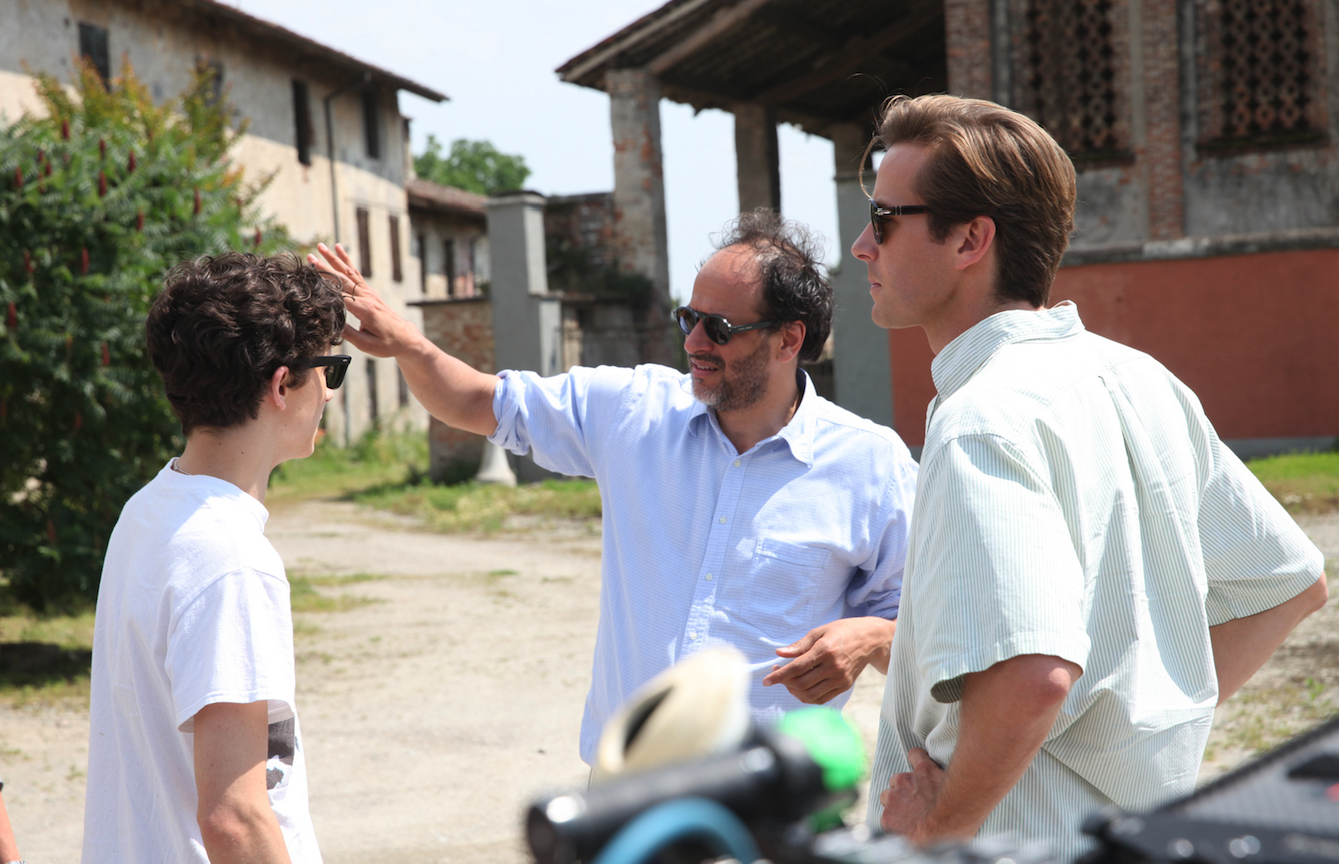 But that first meeting was four years ago – back when Chalamet was 17 and, like Guadagnino, learning that films can take forever to get off the ground. “It looked like perhaps it was going to come together that summer … and it didn’t,” the actor says. “And then maybe the following summer … and it didn’t.” But he refused to leave a project that spoke so deeply to him. “It was complex, layered, contradictory, real and relatable – it was an awesome and accurate lens into what a young person experiences.”

Hammer’s wait was even longer. “I met Luca about seven years ago and had one of the best meetings I’ve ever had,” he says. The face-to-face wasn’t about any particular project – it was just to get to know one another. “I went over to his place, and we sat for hours, discussing literature and art and movies … everything. I walked out and thought, ‘I fucking nailed that.’ Then I didn’t hear anything from him for, like, six-and-a-half years.

By 2016, Guadagnino had made his I Am Love follow-up, the sultry English-language thriller A Bigger Splash; after the producers suggested he take the reins – at that point, who knew the material better than he did? – the Italian director decided that Call Me would be his next project. “I knew I was [also] going to make Suspiria” – his forthcoming remake of the Italian horror classic – “so it was more of the challenge of making two movies back-to-back in the same year, à la Soderbergh or Fassbinder. But then when you say yes, you get invested in the movie a hundred percent.”

And though he claims he had no intention of spearheading the movie until he was asked, Call Me By Your Name feels so in tune with his two previous films (the carnal and romantic exploits of characters, sumptuous locales, unlikely lovers undone circumstance and fate) that some have billed it as the final chapter of Guadagnino’s “Desire trilogy” – a moniker that the filmmaker is a little sheepish about. “They wanted to have a quote for the press book in Sundance,” where the film premiered, he explains. “I was trying to decide what to say about it. And then it came to my mind that, in fact, the last three movies I made were all, in a way, different declarations of the concept of desire. That’s why I came to this idea that this was the last chapter of a possible trilogy.” He smiles, like he’s been found out. “I was trying to articulate a way to run away from the not-nice feeling that I’m repeating myself. I’m thinking, ‘Another movie about rich people lounging by the pool …'”

What helps distinguish the film are its dynamic leads, who formed a fast bond and friendship based on shared admiration for each other’s work. It also doesn’t hurt that Chalamet and Hammer learned to rely on one another while shooting the film’s love scenes. As Hammer puts it, “I can tell you that, when you and one other person are the only naked people in a room full of non-naked people, it kind of galvanizes you a little bit.” 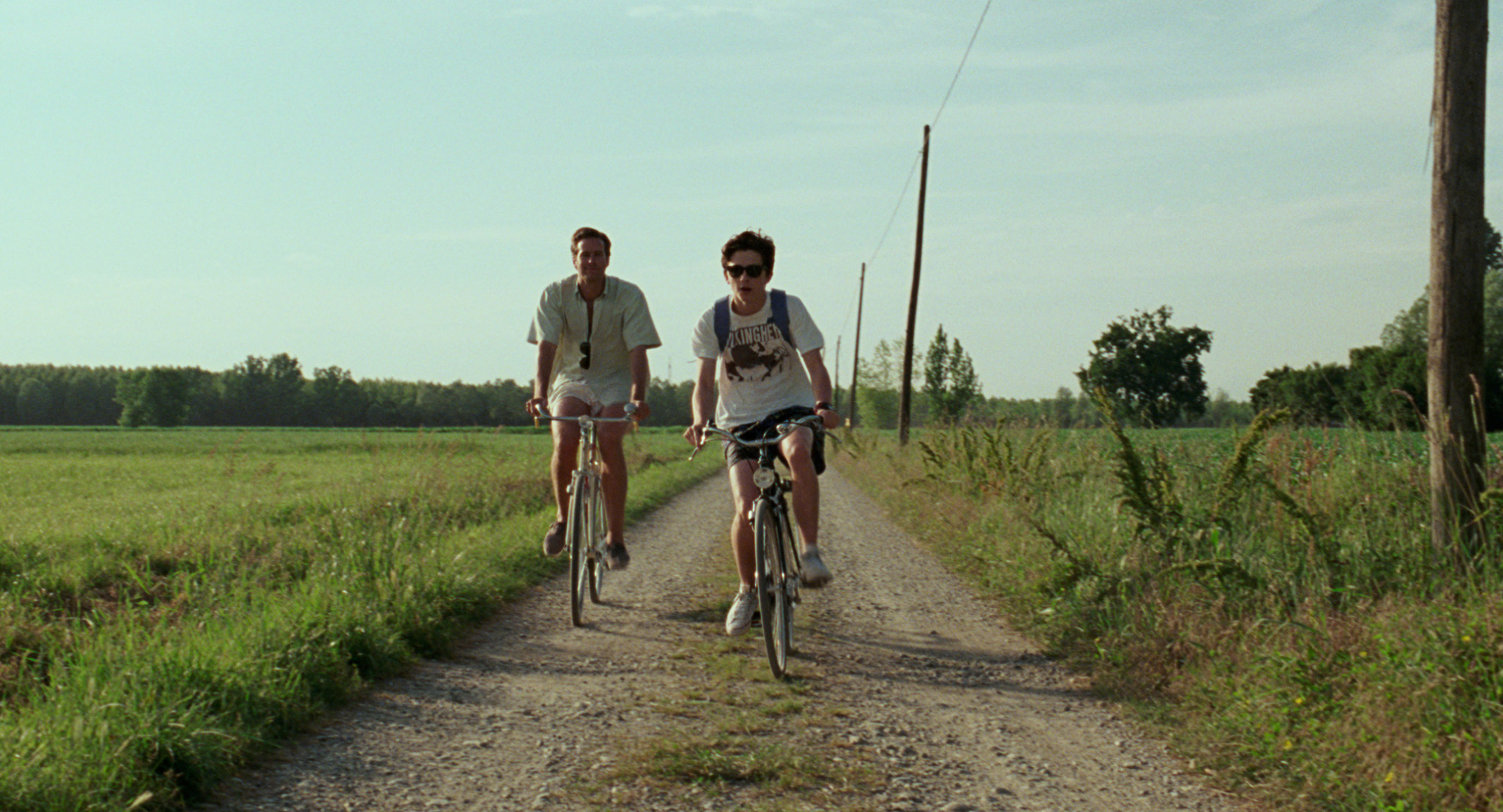 More than a decade ago, some criticized another beautiful gay love story, Brokeback Mountain, because of its casting of straight actors, alongside a straight director. But Guadagnino finds such logic insulting to his process of finding the right performers.

“I am a gay man,” he states flatly. “I’m attracted to men; I’ve always been. I live my life with a companion that is a man. I have admiration for the expression of a lot of LGBTQ artists today … but I struggle with the concept of defining a person by his or her sexual identity. It makes me so uncomfortable. I just don’t get it, and I don’t believe that the fight for civil rights – which is so crucially important – goes hand-in-hand with indictment of someone by his or her identity.”

Continuing this thought, he adds, “I do not cast my actors by their sexual identity. I cast them because I desire them. And I desire them because I can feel they mutually desire me. I think that this is a very queer emotion, and I think it’s much more queer than casting a renowned gay man to play a gay character. I think it’s parochial and borderline conservative to think like that.”

“When you and one other person are the only naked people in a room full of non-naked people, it kind of galvanizes you a little bit.”
–Armie Hammer

Guadagnino brought his cast to Crema in Northern Italy to prepare for the production, shooting on location in sequence. But according to Stuhlbarg, the prep time was not spent digging into the movie’s themes of fleeting love and the anxious thrill of stumbling upon a possible soul mate. “We had one day of sitting around a table reading the whole thing together, just to sort of lightly touch on everything,” Stuhlbarg says. “But then we went about making it together, and we didn’t talk about things.”

Even as fans of Guadagnino’s previous work, the actors can’t entirely pinpoint how he produces such unhurried, everyday transcendence in Call Me. “What he allows us to see in certain [scenes], and the angles from which he allows us to see them…?” Stuhlbarg muses aloud, almost in a daze. “‘Look at this weaving path here. Look at this leaf. Look at the rain. Look at a waterfall.’ All of these, in some perverse and magical language, help tell the story.” The actor shakes his head. “I don’t know how he did it.”

“Luca’s films are boundary-less,” says Chalamet, who notes that Guadagnino never had him read for the part, instead trusting his instincts that the young actor would be perfect. “Anything within the composition of a shot bleeds into another part of a shot. The house is a character, the town is a character, the grass is a character…” Searching for an explanation, he adds, “There’s a scene in I Am Love – Tilda Swinton is making love in the grass – and it’s the most beautiful combination of nature and humanity that I’ve seen in a film.” 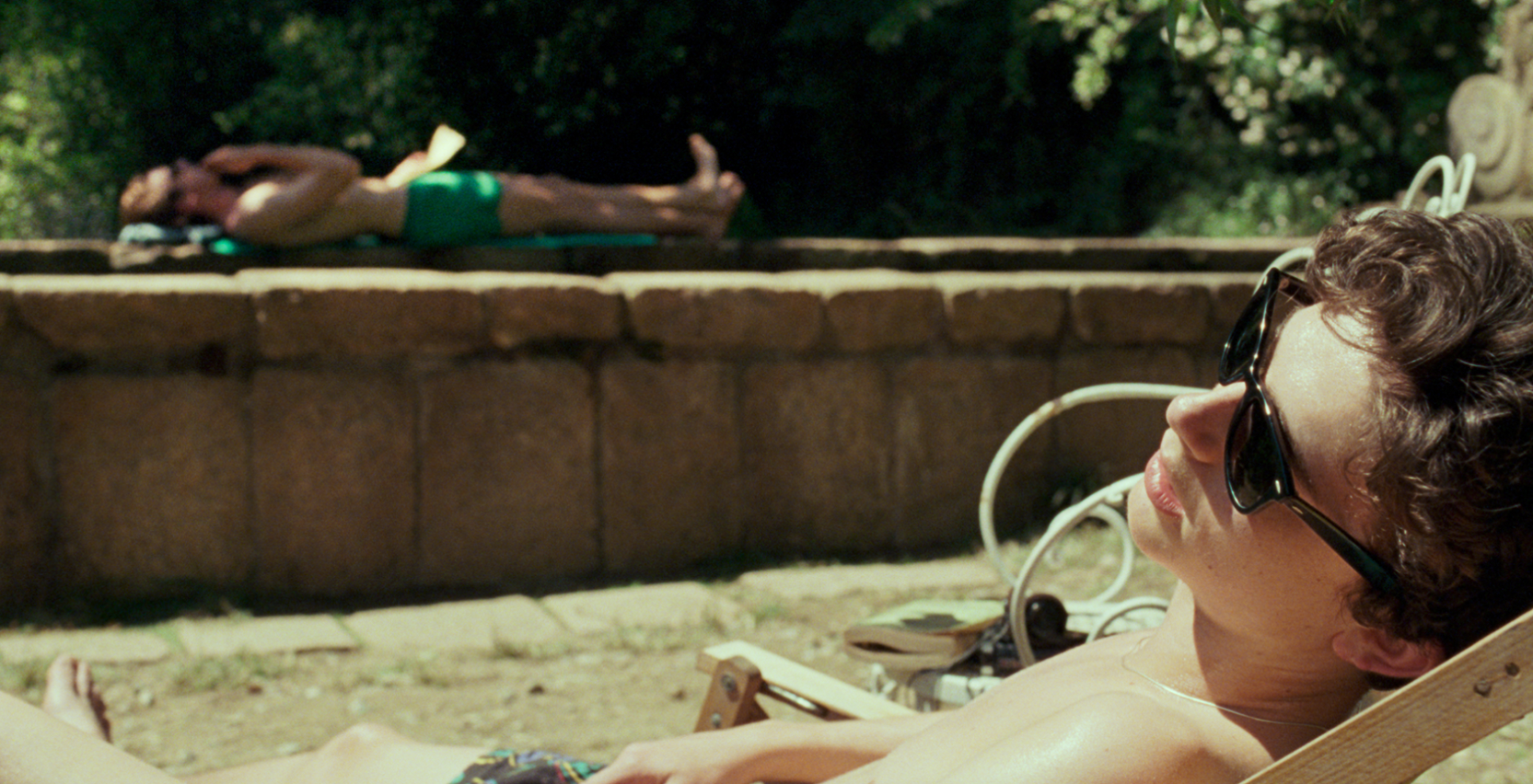 Guadagnino, who’s also a passionate cook, uses a culinary metaphor to explain his methods. “In food, you can make a broth, a stock,” he says. “But ultimately, you can make a consommé, and the consommé is the purest essence of the stock you have made. I want to process myself into making consommé of films – take out everything that is not really necessary.”

To that end, Call Me‘s first cut was four hours, ultimately trimmed to a swooning two hours and ten minutes. But while the film never strains for significance, it’s anchored by a stunningly compassionate and wise valedictory monologue delivered near the finale by Stuhlbarg to his son, telling him to follow his heart and not live a life characterized by regrets and what-ifs.

Stuhlbarg recalls his agent sending him the script with one comment: “Wait ‘til you get to the end.” Best known for his work in the Coen brothers’ A Serious Man and some key TV supporting roles (Boardwalk Empire, Fargo), the modest actor seems overwhelmed by the response his pivotal speech has inspired in critics and viewers. “It seems to have an impact on people, which is really interesting,” he says. “I had no expectations. But it’s provoked some wonderful conversations about parenting, generosity, compassion. How wonderful to participate in a discussion about kindness towards each other.”

Call Me By Your Name concludes on a lyrical, melancholy note, though that may not be the whole story. Aciman’s novel follows Elio and Oliver throughout the course of their lives, and Guadagnino has said he wants to make several sequels that continue the young men’s love affair. (“I thought Luca started talking about it as a joke,” Hammer says when his director’s comments are brought up. “But he seems to get more and more serious about it.”) Whether this tale ends up being the beginning of something or the conclusion of it, the director and his actors have captured that universal, bittersweet moment when a seasonal fling begins to grow, hits full bloom and then ultimately runs its course.

“I mean, I grew up in Southern California and the Caribbean,” Hammer says. “So it was just always summer. But I definitely had really intense emotional relationships when I was younger where you just think, ‘This is it – I am madly in love and will be for the rest of my life.’

“And then you grow up,” he continues, “and maybe you grow apart. But don’t cry because it’s over – smile because it happened.”