Blood Brothers: Meet the Men Behind 'What We Do in the Shadows' - Rolling Stone
×
×

You can tell it’s an all-­male household from the towering stack of dirty, unwashed dishes in the kitchen sink. There’s a rotating chore wheel on the wall, but it hasn’t been updated in a while. The flat’s decor may be Gothic mansion, but the vibe is pure bachelor pad — the sort of post-collegiate dudeness you find when four single guys live together.

The resident uptight roommate, Viago, has a tendency to call a lot of apartment meetings. Vlad is the ladies’ man; Deacon is the “young bad boy of the group”; Petyr, the oldest of the four, keeps mostly to himself. Still, that doesn’t mean they won’t get dressed up and hit the clubs together. Assuming they can get personally invited in to these night spots, of course: The quartet are all centuries-old vampires. They’ve also got a documentary crew following them around, filming their every passive-­aggressive argument over who’s going to clean up all that spilled Type O from the previous night’s feeding.

That’s the premise of What We Do in the Shadows, a horror-­comedy-cum-mockumentary courtesy of co-directors/stars Flight of the Conchord‘s Jemaine Clement and the Oscar-nominated New Zealand director Taika Waititi (Boy) currently playing in theaters. “Usually, mockumentaries are about very realistic things — like Best in Show, which is a great movie,” Waititi says during a stop in New York. “But sometimes you think a real life documentary on the subject would have been just as funny. We liked the idea of doing a documentary about something you couldn’t document.”

The long­time friends and collaborators go way back, having worked together in the early 2000s as the comedy duo Humourbeast. (Waititi later directed a handful of Conchords‘ episodes; Clement also starred in the director’s breakthrough 2007 movie Eagle vs. Shark.) When the duo first conceived of doing a comic faux-­doc a decade ago, they toyed with the idea of chronicling an alien invasion before settling on the subject of vampires. Waititi cast himself as the nerdy, lovelorn Viago; Clement, naturally, took on the role of the sexed-up, hot-to-trot Vlad. The idea was fortuitous: In the 10 years it took for the project to come to fruition, most people’s reference point shifted from Count Dracula to Edward Cullen. But the hapless, old-world bloodsuckers of What We Do in the Shadows could not be more at odds with their True Blood and Twilight counterparts. They’re a bunch of misfits trying to be cool, and who get hung up on the banalities of life. In other words, they’re just like us.

“I think everyone has experienced those boring arguments about whose turn it is to do the dishes,” Waititi says. “A lot of things that were added to the film came from our own experiences of student life in our twenties — like the chore wheel. That’s something that my ex-girlfriend and her sister had that I used to make fun of all the time.” While we see the bloodsuckers engage in traditional vampiric past times, most of the film is devoted to detailing these creatures of the night engaging in everyday activities: watching reality television, making Skype calls and bidding for stuff on eBay. “People are used to seeing vampires flying all the time,” says Clement. “We’re trying to show them in their off moments.” 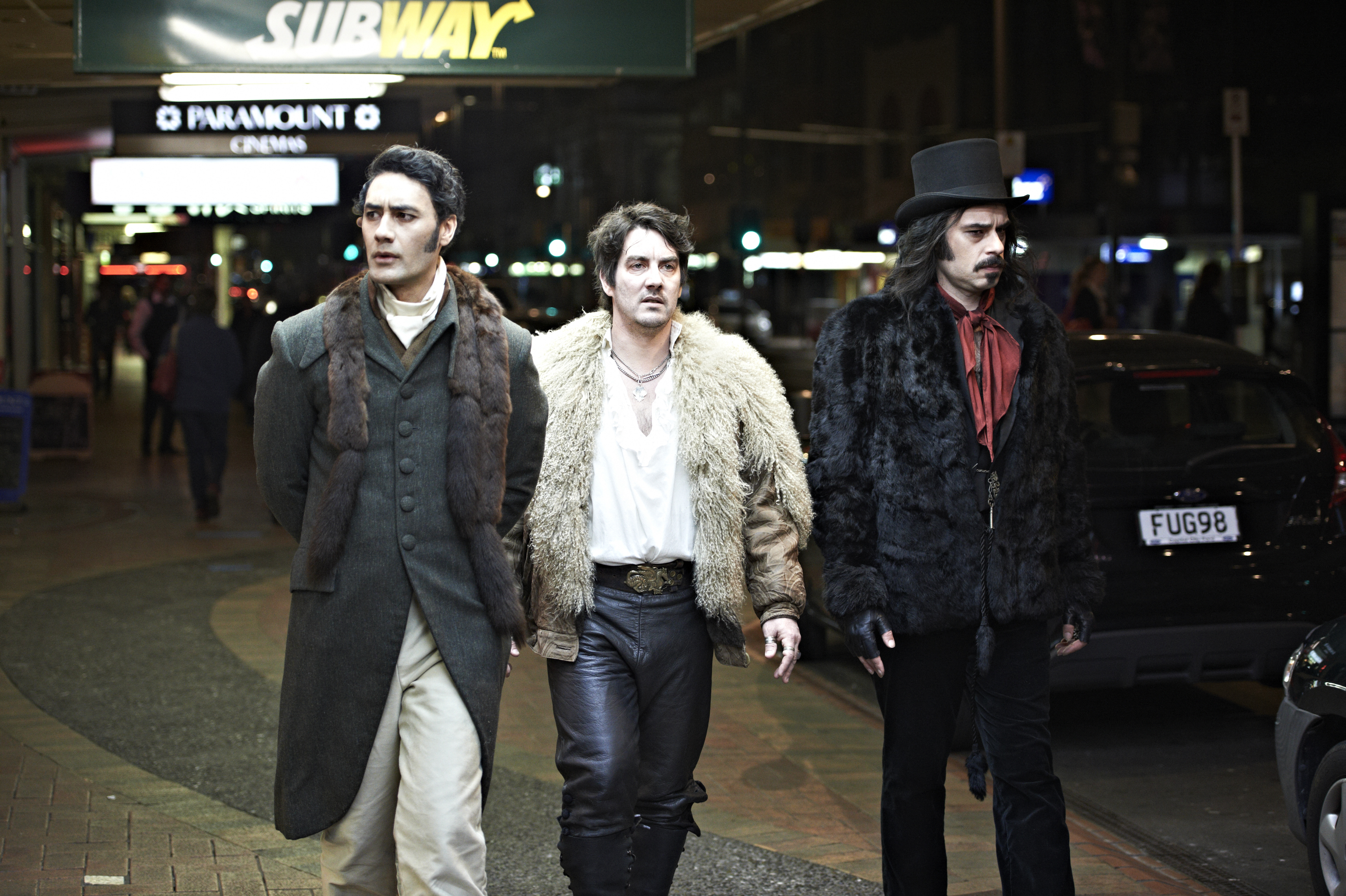 In addition to turning vampire lore on its head, Clement and Waititi repurpose a number of other horror movie conventions in Shadows for variety’s sake: a local pack of werewolves resemble an Iron John-ish men’s group (“We’re werewolves, not swearwolves”); a zombie gingerly asks a human if he’s “predeceased.” “The way we use blood or fright is to make people to laugh,” Clement says. “We didn’t really think of it as a scary movie; we thought of it as a comedy about scary things you’d usually see in horror movies.” Waititi adds: “A lot of the time we looked at the footage and were like, ‘no one is going to be frightened by any of this!’ If the scary bits are scary…that’s luck, really.”

Shadows was filmed over five weeks in Wellington, New Zealand, where Clement and Waititi have both lived for most of their lives. Presumably then, what comes through in the almost-entirely improvised dialogue is a particularly kiwi sense of humor: deadpan (or rather, un-deadpan), self-deprecating, and dry as a mouthful of sawdust. Or perhaps it’s more a hallmark of Waititi and Clements’ styles, in which the awkward banter always seems undercut with pathos: If the earlier parts of the film are inspired by the duo’s younger, sloppier days, the last half introduce more middle aged concerns like loss and regret.

“Usually you’re writing a few years behind yourself, or about experiences you’ve had,” Clement admits. “The stuff about death and friendship, grudges and relationships — that all came from us being older.” They joke that in the past decade they’ve aged “way more than 10 years,” yet matured only one. “Half the time we were just struggling to figure out what was going on,” Waititi says. He’s talking about filmmaking, and yet it’s a sentiment that most people could relate to. Maybe even a few vampires.