Kay Cannon is ticking off names, one finger at a time. “There’s Amy Heckerling,” she says, mentioning the Fast Times at Ridgemont High director, “and Tamra Davis … Nora Ephron did at least one … and the two women behind the Bridget Jones‘ movies, I can’t remember their names.” After some memory-jogging, both Betty Thomas (Private Parts) and Martha Coolidge (Valley Girl) are added to the list; so is Rough Night‘s Lucia Aniello and, thanks to Jumpin’ Jack Flash, Penny Marshall. “You know, there’s a pot-smoking scene in It’s Complicated,” Cannon declares, leaning in. “Which meant the MPAA couldn’t give it a PG-13 – so Nancy Meyers skirts in by a toke!”

She laughs, then momentarily frowns as she looks down at her hands, noting that all of her fingers still aren’t extended yet. And then she laughs again. “It’s ridiculous that I’m trying to figure out whether, in the entire history of studio movies, I’m only the ninth or tenth woman to ever direct an R-rated comedy,” Cannon says. “But fuck it. I’m just so proud to be part of this group now.”

As the director of Blockers, Universal’s latest big-budget raunch-com, the first-time filmmaker has indeed gained entry to a regrettably elite behind-the-camera sorority. But Cannon’s movie has given her numerous reasons to be beaming with pride, even with a title involving a popular term for running interference on someone’s hook-up (the prominent placement of a rooster in the poster should fill in the blanks for you). The premise is simple: Three young women, all best friends since elementary school, have promised each other they’re all going to lose their virginity on prom night. Their respective parents – played by John Cena, Leslie Mann and Ike Barinholtz – have decided they’re going to stop this from happening by any means necessary. The hard-R rating would be more than earned even if Cena didn’t have a beer bong stuck up his ass and then accidentally sprayed someone in the face with the contents.

But in addition to the “butt-chugging,” the flagrant bad behavior, the shit-talking about everything from penises to Mounds candy bars and the “naked Marco Polo” game and the single funniest close-up of distressed male genitals since There’s Something About Mary, Cannon’s comedy also gives audiences something else beside run-of-the-mill raunchiness. Somehow, amidst all the hilarious vulgarity being spewed rat-a-tat at viewers, Blockers weaves in a surprisingly tender tribute to female friendships and the pain of letting go and knowing the difference between protectiveness and helicopter-parenting en extremis. With its mix of outrageousness and sensitivity, the movie feels more like an XX-chromosome companion piece to Superbad than the second coming of Porky’s. Mention this to Cannon, and she immediately replies, “Wait, so you think those genitals are distressed? That’s the actor’s real junk. Should I tell him to go see a doctor? 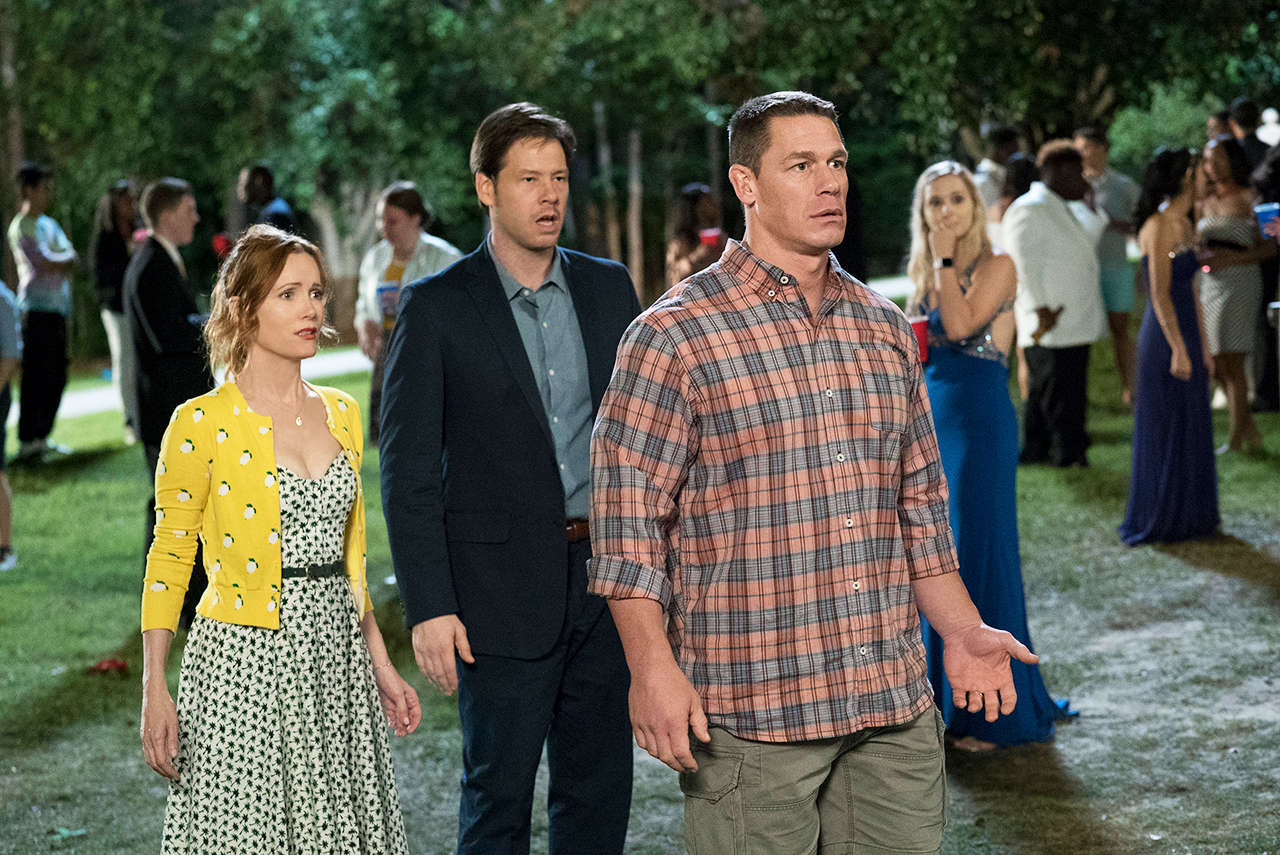 “Actually, it’s funny you mention Superbad,” she continues, “because that last talk between Jonah Hill and Michael Cera, when they say they love each other – I think about that scene a lot. I remember laughing really hard the first time I saw it but also feeling, ‘I actually care about these guys.’ Tonally it should not work, but it completely does. I hadn’t seen anything like that before. And I am a huge fan of the silly and the heartfelt. I love having butt-chugging happening right next to a coming-of-age movie about teen girls.”

Having honed her comic chops in Chicago’s legendary improv scene and a stint in Boom Chicago in Amsterdam – where she performed sketches alongside Jordan Peele, Seth Meyers and future Blockers star Ike Barinholtz – Cannon parlayed her stage experience into a writing job on 30 Rock. She’d soon work her way through what Barinholtz calls “the Tina Fey University of Comedy,” becoming a co-producer on both the show and Fey’s 2008 movie Baby Mama; a joke on the sitcom about collegiate a cappella groups led to Cannon writing the screenplay for Pitch Perfect, which proved you could seamlessly combine slang-heavy girl talk with grossout humor and turn it into a box-office success. She was suddenly a hot commodity in Hollywood. The chance to pen more Barden Bellas misadventures followed, as did stints as a writer and executive producer on some critically praised TV series (New Girl) and some one-and-done shows (Girlboss).

But it was an offer to join the writing room on Neighbors 2: Sorority Uprising that would help her nab the Blockers gig. Recruited to pitch jokes and punch up the Seth Rogen comedy, she impressed the star and his partners at the production company Point Grey. They thought: This woman is a director. She needs a project ASAP. So when Jim and Brian Kehoe’s script about a trio of concerned adults intercepting text messages about their kids’ senior-year sex pact, it made its way to Cannon’s doorstep. “It was a straight offer to direct, which I was pretty shocked to get,” she says. “I mean, I’d been a showrunner, and it had come up in conversation before, but it was not part of my plan at all. Then I read the script and thought, ‘It’s super funny, it feels like this was written by men – and I know exactly what my spin on it would be.’ I knew what to do with this. And I knew what I would change.”

For starters, Cannon says, she noted that the script leaned far more heavily on the parents’ storyline than the teens’ side of things – and that if you made it more of a 50/50 balance, the movie suddenly opened up in a whole new way. “I tried to remember what high school was like for girls and everything they – we – had to deal with,” she adds. “And I wanted to give each of the three daughters a specificity, the idea that they were each going through their own experience. I didn’t want them to be interchangeable.” That meant not only fleshing out subplots involving leaving for whether to go to an out-of-state college and breaking away from an overly sensitive father but also, in the case of Gideon Adlon’s character, adding in the idea that she’s struggling with her sexuality and coming out. 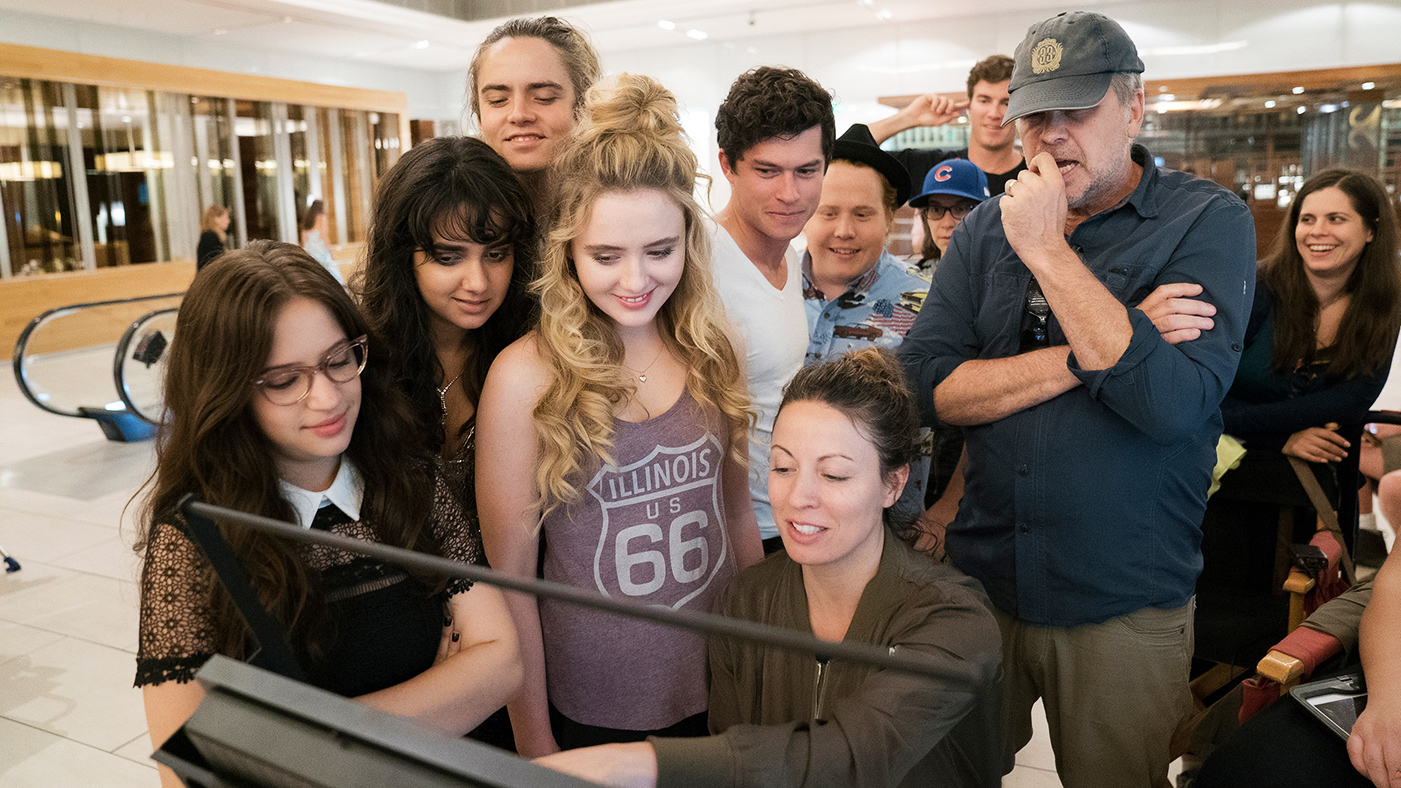 According to Cannon, she auditioned hundreds of young women to play the three teen parts and cast Adlon (daughter of Better Things‘ Pamela Adlon), Kathryn Newton and Geraldine Viswanathan right before shooting was set to start. (“None of them were at the table read,” she notes, “which tells you just how 11th hour finding them was.”) She knew from the get-go that she wanted Mann for the part of Lisa, the single mom who has trouble envisioning her “best friend” daughter leaving the nest; she had taken note of Cena’s comic chops when he was hosting the ESPYs and realized she had found her Mitchell, the teddy-bear–ish jock dad who’ll do anything for his kid. “Including have IPA pumped up his ass,” Cannon says, proudly. “John’s an athlete, so he understands timing – he’s had 20 years of knowing exactly how and when to do something to elicit a response when he’s in the ring. And he brings that same discipline to comedy. He’s pretty much willing to do anything.”

And for Hunter, the party-all-the-time manchild of a dad who’s the sole voice of reason among the adults, Cannon reached out to her old friend Barinholtz, who she knew could nail the right mixture of sleaziness and empathy. “The thing about Kay that I’ve always loved,” the actor says, “is that she’s this mixture of a very traditional, Midwestern ‘proper’ lady and this take-no-shit, boss-ass bitch. Which, when you think about it, is Blockers in a nutshell: this sort of Puritan idea of ‘not my daughter!’ on one side and ‘we’re modern women, we can do whatever the fuck we want’ on the other. I feel like she was one of the only people who could totally understand both sides of the fence. She has a high comedy I.Q. And because she comes from improv, she’s the most collaborative director you could ever work with.”

To exemplify that last point, both Cannon and Barinholtz point to one of the movie’s stand-out scenes, which involves Mitchell and Hunter breaking into a neighborhood house while avoiding a sexually adventurous couple (played by Gary Cole and Gina Gershon) playing a game involving blindfolds and nudity. The idea, she says, originally came from Seth Rogen and Evan Goldberg, who’d pitched her a few possible jokes as a favor for her Neighbors 2 script consulting. Once Cannon decided to shoot the couple “like the dinosaurs from Jurassic Park,” a whole realm of possibilities opened up. Something, however, was missing – until Barinholtz suggested that, because the dads have to remain silent among these naked bodies, what if they mouthed their dialogue? And then you add subtitles to the exchange? Bingo. “That came from us rehearsing the scene and all of us going, ‘This is good. What can make this better?'” she says. “With me, the funniest idea wins. That’s as close to a directing philosophy as I have.”

Still, Cannon is quick to emphasize that the goal wasn’t how-low-can-we-go for laughs but how does the funny work for the characters – a mix, she says, that even in our post-Apatovian world, still throws people off when they expect their raunch-coms to be nothing but a blizzard of dick jokes. She’s ecstatic that Blockers‘ premiere last month at SXSW got a reception that fell somewhere between batshit insane and Beatlemania, and she knows that there’s an audience for comedy that reflects “the days when we do really crazy shit and then have a serious conversation with someone the next minute. The crying-laughing to just-crying days.”

But she’s already heard stories of folks wondering why someone would put out a “retrograde” comedy about parents “saving” their daughters’ purity – “Would they be freaking out if this was their sons trying to lose their virginity?” – and Cannon hopes that “the folks who are crossing their arms going ‘I refuse to see this’ get dragged to it and actually see what it is, actually enjoy it. You know, I remember hearing a lot of folks going, ‘Female a cappella group, not interested,’ and then later having them tell me ‘Pitch Perfect is hilarious!’ So hopefully they’ll come out.” (The movie’s $21 million opening this weekend suggests that the answer is yes.) Barinholtz remembers talking to her on set about sneaking this subversive, progressive story about female empowerment into a raunch-com and telling her, “The dudes who think this is the next American Pie – that’s really who you want to see this. They are the ones who need this message. We’ve seen the bro version of this story – now it’s time for the bra version.”

As for Cannon, she’s just happy that she’s made something she finds funny while injecting a female sensibility into a genre that’s had a checkered history when it came to representation. Hopefully, if Blockers becomes an out-of-the-box success that shows some staying power, it will pave the way for other filmmakers to add their voices to the mix. “It’d be great if, the next time we meet, we couldn’t name every female director who’s made an R-rated comedy off the top of our heads,” she says. “It’d be great if I was forced to grow another few hands to count them all.”