In the late Seventies, an African-American police officer infiltrated a Colorado Springs chapter of the Ku Klux Klan simply by replying to a classified ad. That unbelievable-yet-true story is the basis of Spike Lee’s action-packed new BlacKkKlansman, made all the more disturbing since it’s set in what seems like a sleepy hamlet on the Rockies’ front range, then a city of around 200,000 at the foot of regal Pikes Peak.

Lee brilliantly uses the story to weave together the threads of supremacist culture in the Seventies with the election of President Donald Trump, illustrating how Trump’s slogans and policies reflect Klan ideologies — “America First,” making America great “again,” honoring bigots in power. It’s an allegory for the world at large right now. Lee has said that its point was to demonstrate how right-wing fascism and hate culture are shaping global culture. To me, though, the movie’s peaceful setting was a reminder that even among the beauty of the mountains, ugliness lurks. In the case of BlacKkKlansman, it was in my backyard. I was born in Colorado Springs shortly after the movie’s plot ended and lived there until college.

Spike Lee on 'BlacKkKlansman' and Life in Trump's America

I still have vivid memories of how hate culture persisted in the state in the Eighties and Nineties. I grew up hearing white friends — and, more shocking, their parents — casually use the n-word and other slurs. It’s also a patently conservative area, due to the presence of evangelical Christians and two military bases. To drive home his message, Lee ended BlacKkKlansman with footage of last year’s riots at a white supremacist rally in Charlottesville, Virginia, including the moment a counter-protester named Heather Heyer was run over and killed, juxtaposed with Trump’s mealy-mouthed reaction to it. Lee has said that from the moment the Charlottesville tragedy happened, he knew it would be the movie’s ending — “This is someone whose daughter has been murdered in an American act of terrorism — homegrown, apple-pie, hot-dog, baseball, cotton-candy Americana,” he told Rolling Stone. It’s a brilliant, heartrending ending but I immediately imagined a different coda: an epilogue that traces the rest of Stallworth’s real-life story and — despite the film’s suggestion to the contrary — Colorado Springs’ lasting, rich history of racism, anti-Semitism and homophobia, which still resonates today.

Stallworth’s time in Colorado Springs was relatively short. He moved there from Texas in 1972 and conducted the investigation depicted in the movie between October 1978 and the following April. He left the force in 1980, worried that two of his superiors would hold him back, and now lives in El Paso. Stallworth claims that his investigation 40 years ago thwarted three cross burnings and two bombings of gay bars, and unmasked Klansman working in the military. Since it was an intelligence operation, no arrests were made (Sorry to Bother You filmmaker Boots Riley has offered a detailed account of the operation’s supposed actual goals in a pointed critique of the movie) and it’s ultimately questionable what its long-term effects were in the city and state.

At the time the police chief ended Stallworth’s intelligence operation, fearing allegations of entrapment, Stallworth was in contact with the KKK’s Denver chapter leader, Fred Wilkins. Six months after Stallworth moved on, Wilkins entered a Denver radio station and threatened to kill the outspoken liberal, Jewish talk-show host Alan Berg, who criticized white-power groups. Wilkins backed off, and he and Berg reached an out-of-court settlement, according to The Gazette (the paper that hosted the Klan’s ad in the Seventies). But in June 1984, a supremacist group in Idaho called the Order successfully carried out a hit on Berg, as dramatized in the play and subsequent Oliver Stone film adaptation, Talk Radio. The driver in the assassination, David Lane, had been present in at least two meetings that Stallworth’s white counterpart in the investigation also attended. Lane later gained notoriety for coining the white-supremacist “14 Words” oath: “We must secure the existence of our people and a future for white children.”

“When I heard about the Alan Berg killing, that’s probably the first thing I thought of: Had we been able to pursue this, we might have known about the plot to kill him before it happened and could have prevented it,” Stallworth said in a July interview with The Gazette. 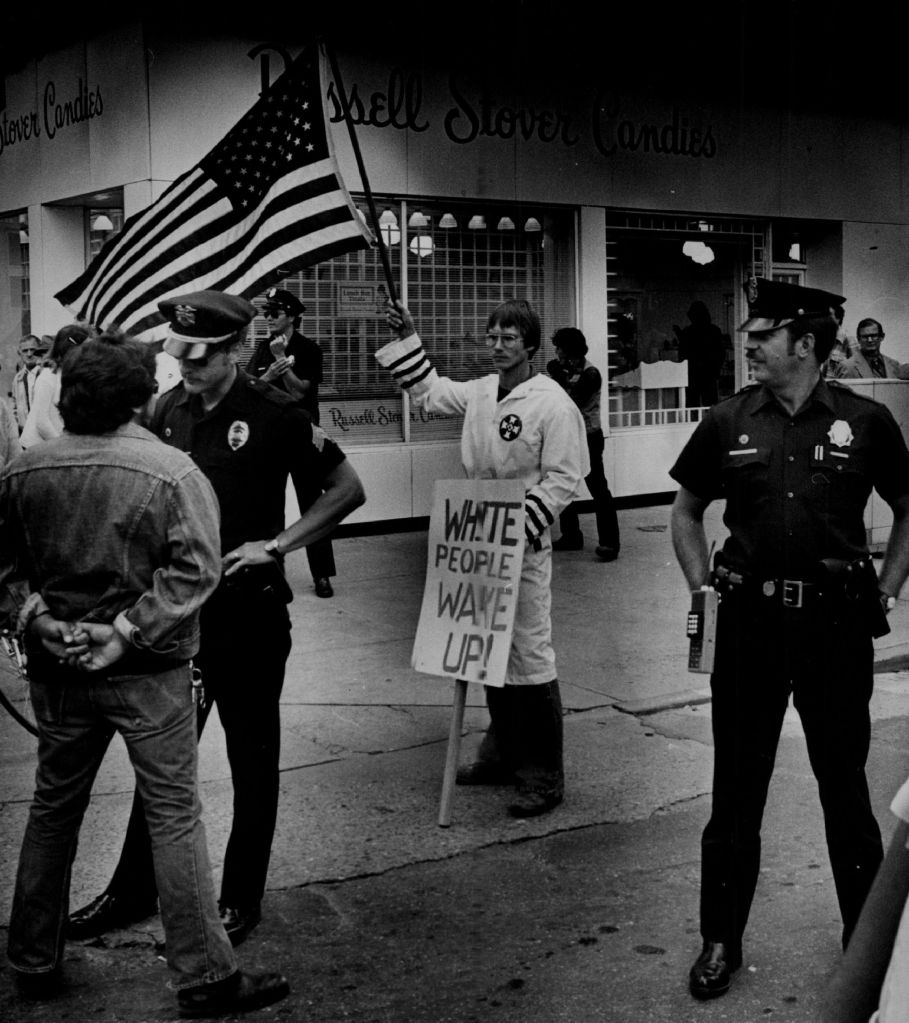 September 1979: Police protect a Klansman during a Chicano march through downtown Denver.

Less than a decade later, a political move affecting the LGBT community got Colorado pegged as “The Hate State.” In 1992, voters approved a measure that forbade civil rights for homosexuals. Gay rights groups, the mayors of New York, Chicago and Philadelphia, and even Barbra Streisand called for boycotts of the state. One of the most outspoken people behind the bill, according to the Denver alt-weekly WestWord, was a Colorado Springs car salesman, Will Perkins. The United States Supreme Court overruled the amendment in 1996, but Perkins continued to push his homophobic agenda in the city.

In 1996, Perkins criticized the newspaper at the Springs’ Palmer High School (my alma mater) for printing a 1,000-word cover story about gay teenagers, “Finding True Love: Gay Teens Search for a Place.” Perkins made it a cause célèbre for his organization, Colorado for Family Values, a conservative lobbyist group that fit right in with the city’s deep-pocketed, evangelical institutions. The group’s mission at the time, according to the National Catholic Reporter, eerily echoed the Klansmen’s “14 Words” oath: to “lead and assist those opposing the militant homosexual attacks on traditional family values.”

Perkins’ group led a postcard campaign urging concerned parties to petition the board of education to vilify homosexuality in its schools, and it claimed to have gotten some 7,500 people to endorse it. Many of the signatories had never even seen the article, but the number was significant enough that it spurred to a town hall hearing over the issue, which I attended. The school district ultimately resisted the outcry, though years later it would be the target of a lawsuit for preventing students from forming a Gay-Straight Alliance as an official club. Perkins later staged his own arrest for making homophobic comments as a publicity stunt in 1997, and as recently as 2006 he supported another ballot measure that would define marriage as a heterosexual union, which ultimately passed. (In brighter news, in 2016, Palmer became the first school in southern Colorado to adopt a gender-inclusive bathroom.)

Racial injustice, too, has continued to be a problem in Colorado, possibly because of its deep-seated roots. A PBS documentary about Colorado’s relationship with the KKK says that at one point in the Twenties it had the second-highest per-capita membership in the group (after Indiana) and that the Klan reemerged there in the 1990s. These days, the Southern Poverty Law Center identifies 21 active hate groups in Colorado with several Nazi, anti-Muslim, anti-immigrant organizations stationing themselves there alongside the KKK; this number is comparable to that of Alabama, though it’s a fraction of the number in Florida, California and New York. Vestiges of Colorado’s supremacist past remain: Until 1995, Denver’s airport was named after its former mayor, Benjamin Stapleton, a Klan member whose name is still proudly displayed on buildings around town. 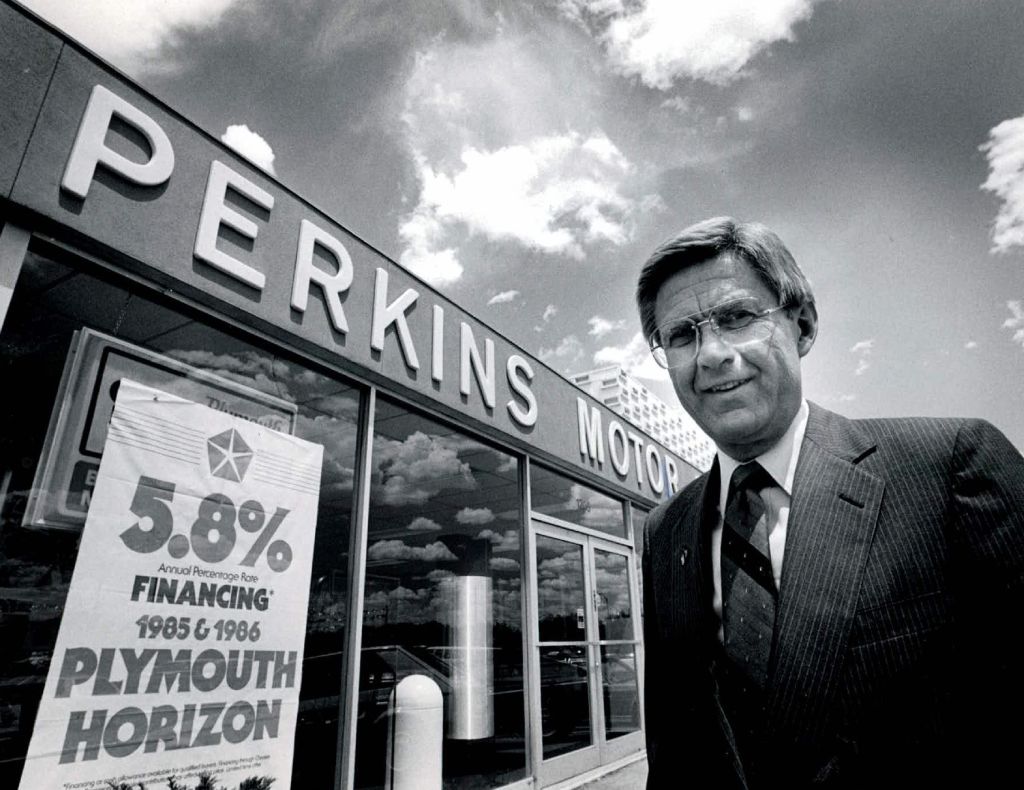 More than twice as many people live in Colorado Springs today as when Ron Stallworth lived there, and the state has become a paradox. Colorado has legalized recreational marijuana (though Colorado Springs has banned its sale) and its voters have backed the Democratic presidential candidates in the last three elections. Colorado Springs has named roadways after Reverend Dr. Martin Luther King, Jr., and Reverend Dr. Milton E. Proby, an African-American civil rights leader who lived in the city. A voting ballot this year will possibly end gerrymandering, and an African-American woman is running for Congress there as a Democrat in a traditionally Republican district. There is nevertheless a long way to go.

In 2016, a report showed that black men and women were disproportionately arrested and imprisoned more often than whites in Colorado; African-Americans made up only 4.2 percent of the state’s population at the time but they accounted for 12.4 percent of arrests. In 2017, Colorado Springs had to pay $212,000 to settle a racial profiling suit in which two men accused police of holding them at gunpoint and searching them without cause. And this past May, a white man fired three shots at a black man while yelling racial slurs, leading to a five-hour-long standoff with police. While none of these instances tie directly to the Klan, racial tensions remain high in the area, even as the population has grown.

“White supremacy never dies,” Stallworth told The Denver Post in July. “They go underground and then they come back at certain times to spread their hate. We’re in that period again now, and that’s why this movie, and this story, mean something.”

Lee has said that the message of BlacKkKlansman is for people to wake up. “That’s been in almost all my films,” he told Rolling Stone. “Wake up. Be alert. Don’t fall asleep. … Let’s make the best of the time we have on this earth, and not get into this hate and all this other bullshit.” It’s a crucial memo to the world, and coming from Colorado Springs — a place that looks like a utopia beneath purple mountains’ majesty — it’s a reminder that despite Lee’s hero shot of Stallworth and his radical girlfriend ready to take on the Klan at the end of the movie, the story didn’t end there.