He repeats himself three more times in his musical baritone before unleashing one of the 20th century’s most seductive smiles, satisfied he’s made his point. “There are certain individuals whose legacy you will never forget,” he says, taking a sip of his Tuesday-afternoon beverage, a vodka-lemonade concoction. “I’ve always tried to create this — Billy Dee Williams.”

Williams, who turned 82 in April, came out of semiretirement to reclaim the role of star-faring smoothie Lando Calrissian in December’s Star Wars Episode IX: The Rise of Skywalker, which means his Hollywood career now spans 60 years, beginning with 1959’s The Last Angry Man. “It goes back to when I was a kid, saying, ‘Let me do this a little bit differently,’ ” he recalls. “I always wanted to be one of the greatest actors America ever created. But I also realized . . . branding. Branding! If you want a career, brand!” He looks at my drink. “Do you want another one?”

'Black Widow,' 'Cruella' and 20 Other Movies to Stream on Disney+ Right Now

Williams is sitting on a bright-red couch under a black umbrella on the sun-splashed porch of a West Hollywood day spa owned by an old friend; a couple of the actor’s accomplished paintings hang inside, including an energetic portrait of a jazz club, which leads Williams to reminisce about the time he, Miles Davis, and Cicely Tyson attended a dinner at the Reagan White House. While they waited to meet the president, Davis had a question: “Say, Billy, who does your hair?”

Williams has always had star quality to spare. His mom was a talented opera singer who wanted to be a movie star: “I’ve lived out all her dreams.” As a kid in Harlem, his real passion was painting. He won a college scholarship to study art, but sheer charisma pushed him onstage and in front of cameras. As a young man, he was once mobbed outside a Frankie Lymon concert by young girls who assumed he had to be a member of Lymon’s group, the Teenagers. “They started tearing off my clothes,” Williams says. “The cops had to pull me out of there.”

By the time of his twin early-Seventies successes, Brian’s Song and Lady Sings the Blues (alongside Diana Ross), he was a full-fledged sex symbol, touted as the “black Clark Gable.” At the latter movie’s premiere, he recalls women flat-out fainting at the sight of him. “I created romance,” says Williams. “Nobody’s ever done that, that looked like me. Hollywood had no idea what to do with it.”

Williams once said that in the Sixties, Sidney Poitier got most of the roles he wanted, which only demonstrated the paucity of parts for black leading men. He had a lot of fun that decade, living in New York and doing theater and television, but his slow-building film career ate at him, until he found a cure. “LSD saved my life,” says Williams, who’s otherwise firmly anti-drug. “I wasn’t doing it to get high. It let me get inside of myself.”

The lack of suitable roles back then “goes under the heading of bigotry,” says Williams. But that’s a rare admission from him; as early as 1981, he told Ebony magazine he was bored of “the question of race,” and these days, he hesitates to even identify as black. “I see myself as . . . an everything,” he says. There’s some Native American ancestry in his family, but mostly, he doesn’t want to be pinned down. “We always want to lock ourselves into a singular point of view, and that’s not who we really are. We’re this incredible universal being.”

“I love glamour,” he adds, from behind Tom Ford sunglasses. He’s wearing black silken trousers with a white sports jacket, and carrying a white-tipped black cane. “My favorite movies are with Fred Astaire and Ginger Rogers,” he says. “I wanted to do sophisticated comedy, to be that guy wearing a tuxedo who solves crimes. I didn’t want to be sitting around talking about ‘Oh, woe is me, I’m a slave, and my life is not happy.’ ”

He loved that Lando Calrissian wasn’t written for any particular ethnicity. “I met with George Lucas, and he explained he had gotten flak about Darth Vader, the big dark figure, being a villain, and all he [had been] thinking was, a guy in a white hat, a guy in a black hat,” Williams says. “He wasn’t thinking racially. So when they gave me the script, I said, ‘This guy wears a cape? And Calrissian — what is it? Italian?’ I looked it up. Armenian! What an opportunity to move outside of the box.”

“To me, I’m Lando,” adds Williams, noting his respect for the actor who attempted the role in 2018’s Solo. “I love that Donald Glover. He’s a brilliant young man. But his hair was not how I thought of Lando. He was more Afrocentric with his hair. I have nothing against that. But when I created Lando, he was beyond all of that.”

He was also perplexed by Solo’s suggestion that Lando was in love, maybe even lust, with a droid. “I think that’s the reason they didn’t have the success they could have had,” he says. “Because they were going for something that was topical, instead of an adventure that’s far beyond those questions. If you’re talking about this huge, incredible story, why lock yourself into this tiny moment between a character like Lando and his robot friend?”

He misses jousting with Harrison Ford, recalling the time Williams was hanging off a barge on Return of the Jedi and an explosive went off, injuring his foot. “Harrison is acting up a storm while I’m yelling, ‘I’m hurt!’ I said, ‘Boy, Harrison gets serious. He’s acting his ass off.’ ” He notes, playfully, that he and Ford didn’t share the screen all that much. “If we’re on together for more than a few moments, who do you think will win?”

He grieves for Carrie Fisher (“I loved that child”) and is fond of Mark Hamill, though he’s unsurprised Hamill became a voice and character actor rather than a leading man. “He had a boyish quality,” Williams says. “He didn’t have that mature, masculine . . . not that he wasn’t masculine, but he was like a little kid.”

Williams, who’s been married to his third wife, Teruko, since 1972, is proud of his post-Star Wars career, including a long run as a spokesman for the malt liquor Colt 45 — to him, it’s proof of his brand’s power. Besides, “there’s nothing bad about drinking beer.” He was displeased when Chris Rock used the ads as a punchline after a woman accused Williams of battery in 1996. (The misdemeanor charges were dropped.) “I’ve never slapped a woman,” says Williams. “I’ve never abused women. . . . I heard about his comments, and I have always wanted to — but decided not to — address that with him.”

These days, Williams takes it slow, gets up late, doesn’t even do much painting anymore. He enjoys the freedom his age affords him — “I’m 82 years old, and I don’t give a shit” — and he’s pretty sure Skywalker is his final acting job, as much as he enjoyed it. On set, says Lucasfilm president Kathleen Kennedy, “He had a smile on his face the entire time we were shooting.”

Old friends keep dying, most recently the actress Diahann Carroll, so it’s hard not to think about mortality. He wonders about reincarnation, especially since acid showed him there’s “something beyond three dimensions.”

“I don’t fear death,” he says, his sunglasses off now, revealing warm brown eyes, “so much as I would not like to leave.” But he’s happy, at least, with how he could be remembered. “My kids and my grandkids, and later on my great-grandkids, they can say, ‘Wow. My great-grandfather was Lando Calrissian.’ ” 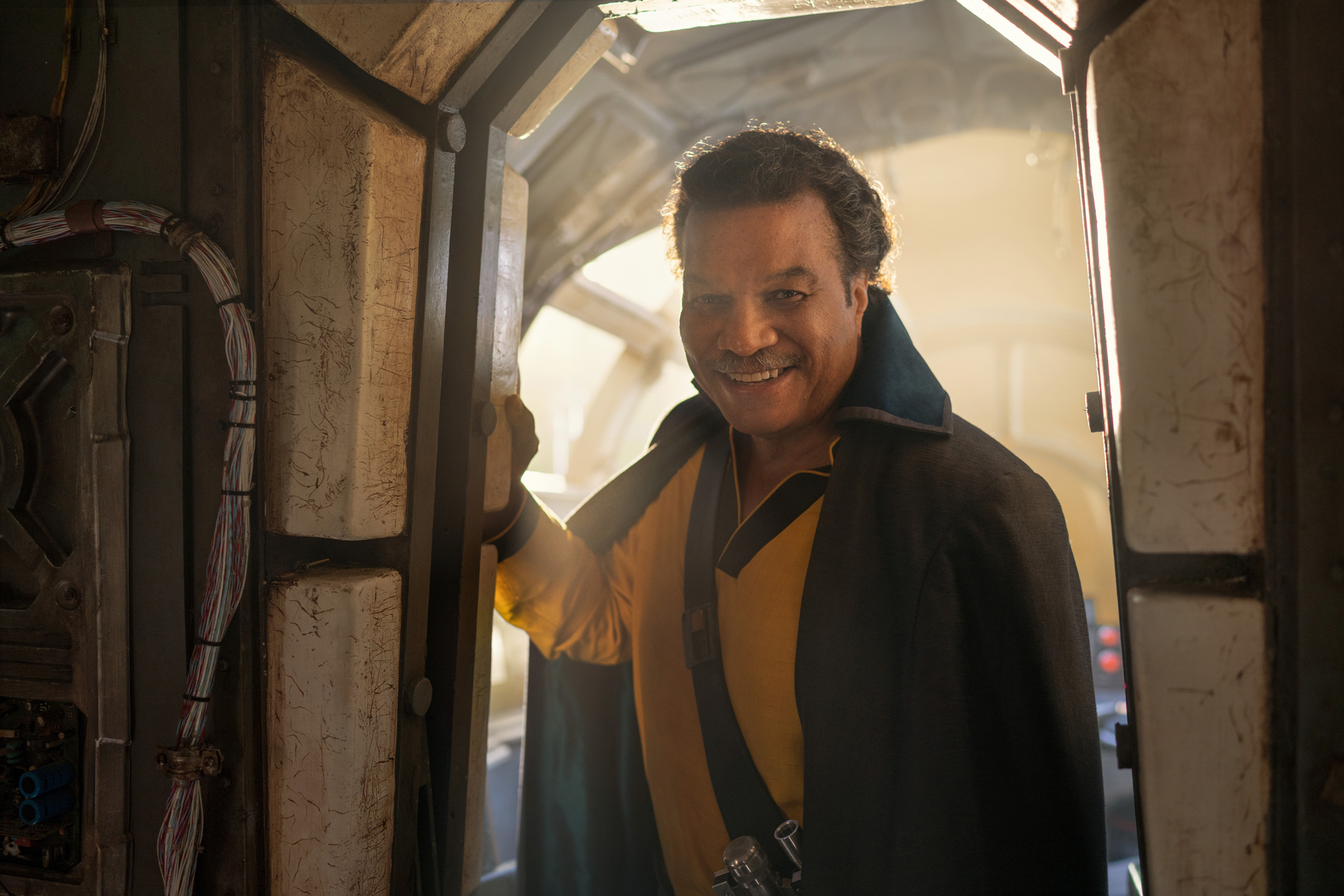 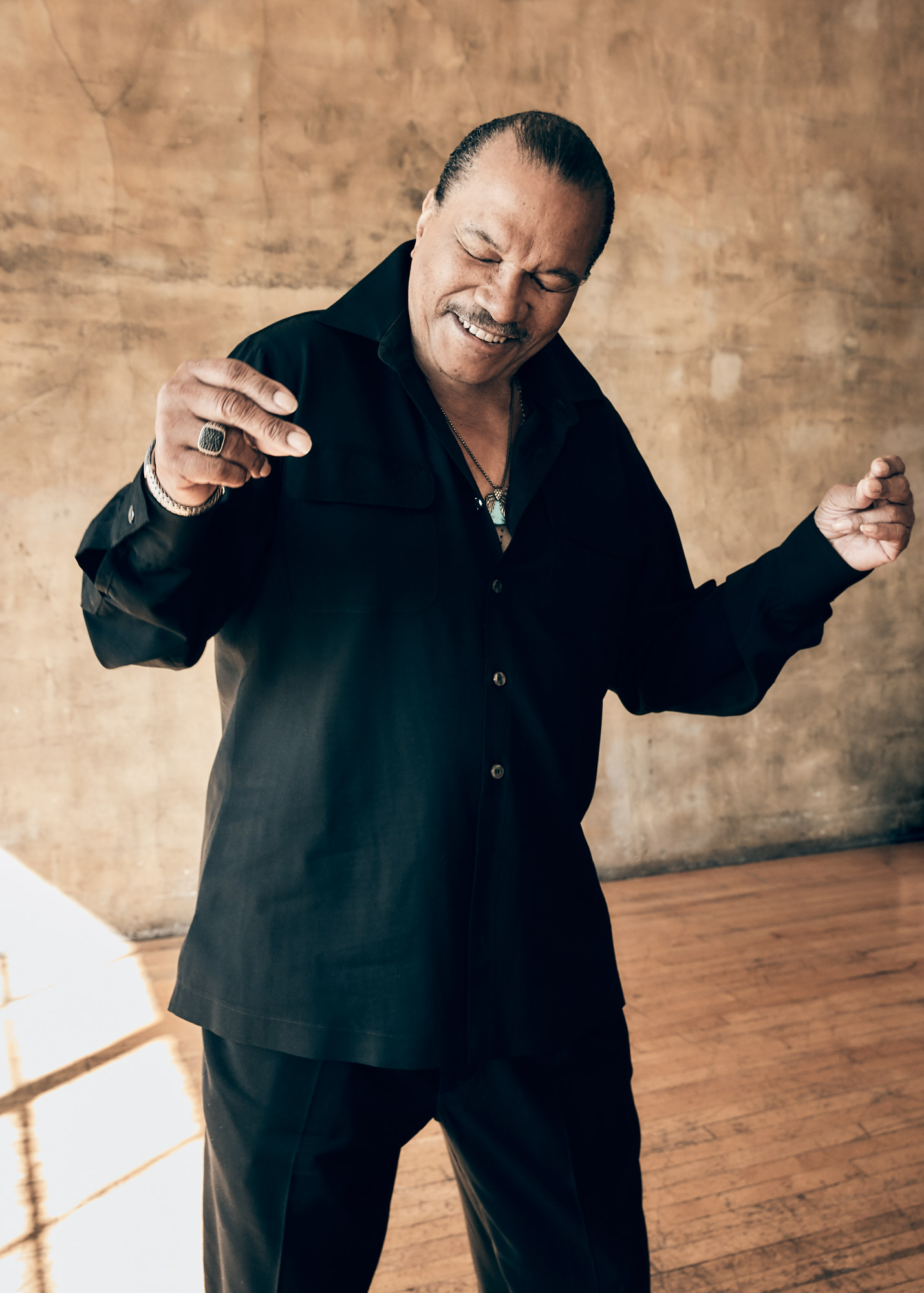