Ben Dickey: The Man Who Would Be 'Blaze' - Rolling Stone
×
×

To see Ben Dickey at all is to spot him from a country mile away. The 41-year-old musician is milling about something called the Gibson Showroom in Austin, a sort of multi-purpose space decorated in vigorous 21st-century guitar chic, and clocking in well over six feet tall, the Little Rock, Arkansas, native dominates whatever square footage he is in. The dude is big, and a little husky. But you wouldn’t call him intimidating. In fact, when you watch Dickey in Blaze, Ethan Hawke’s semi-biopic about singer-songwriter Blaze Foley (it opened in Austin on August 17th, and starts going into wide release in September) one of the first things you notice about him is a sort of sheepish, yards-wide smile. Granted, that grin can become a sad-clown grimace as life breaks the late, great Foley down; there’s a reason that Lucinda Williams was compelled to write the heartbreaking “Drunken Angel” about this legendary beautiful loser. But in person, the man who would be Blaze seems like a guy upon whom life would be hard pressed to leave a scratch.

“Let’s head into the back,” Dickey says, gesturing to some couches as Hawke takes a call from his mother, a camera crew sets up and several publicists zip around. “Much easier to hear.”

A running buddy of Townes Van Zandt (and like Dickey, a native of Arkansas), Foley was a skilled, if troubled, songwriter who cut one album — a self-titled 1984 LP — in his lifetime. Something of a legend in his community, he was shot to death in 1989 after an altercation involving the son of a friend. His craft inspired songs from fellow troubadours like Williams, Van Zandt (“Blaze’s Blues”) as well as four tribute albums and numerous covers  — notably Merle Haggard’s elegiac version of “If I Could Only Fly.”

It’s a difficult role and Dickey is in virtually every scene of the emotionally complicated picture, playing Foley as an optimistic young man in the 1970s and an increasingly drug-and-drink-addled artist in the 1980s. But the first-time actor does a savvy, emotionally detailed job — and he seemed awfully comfortable with the music bits, thanks to the fact that this self-described “spelunker, a music history buff” has been kicking around the American musical underground in various outfits for the last 20 years.

“I was surrounded by music as a kid,” he says. “My grandfather had a Gibson L30 from the depression era. And when he got sick in 1987, when I was 10 years, he used to always let me play the guitar supervised. He gave it to me about eight months before he passed away, and I took it really seriously, I was like, ‘This is my granddad’s guitar,’ so I just took it upon myself to start learning how to play songs.” Various record collections from relatives filled out his informal musical education: “I had a huge library of [records] at my disposal, and I considered it very crucial to who I was.”

In high school, in the middle of a solid arts local scene, Dickey discovered punk and started sneaking into shows, though he admits he was never much of a hardcore kid. “Mosh pits were less interesting than what was happening on stage,” he admits. “I was never a hardcore kid, but the energy of the community made sense to me.” Then when he was 17 or 18, Dickey saw Fugazi in Oxford, Mississippi, and “I saw this enormous power emanating out of peaceful creatures. It wasn’t snarling for the sake of snarling. I was like, ‘Wow, that’s really what I want to do.'”

Soon, he and some pals started the post-hardcore act Shake Ray Tubine in 1995. “Clay Simmons — the other guitar player — and I wrote songs, we’d present them to the other guys in the band and they would turn into something else,” Dickey says. “We’re searching together and finding things and I got addicted to the process.” The band cranked out a solid LP “The Sauce of Solution” in 1997, played their final Arkansas show with Fugazi in 1998 and soon decamped for Philadelphia, where the band dissolved in 2000.

Once in the city of brotherly love, Dickey ran a trio called Amen Booze Roster that disintegrated quickly; his classic rock urges found stronger purchase in the group Blood Feathers. (“The Kinks, the Beatles and the Stones,” Dickey says, by way of explaining the band’s sound.) They made three albums, one of which remains unreleased, of complicated pop rock starting around 2005. It was during the Blood Feathers era that he first head Foley’s “Clay Pigeons,” covered by John Prine on his album Fair & Square. It was a revelation.

“I was like, ‘How did I miss this?,'” Dickey says. He began digging online and elsewhere for Blaze’s music. “He’s got a line on the song ‘For Anything Less’ that’s like, ‘Don’t try to change me, I can’t even change myself. I know, I’ve tried.’ How did this not grip hold of that whole scene? How do we not know this guy?!” 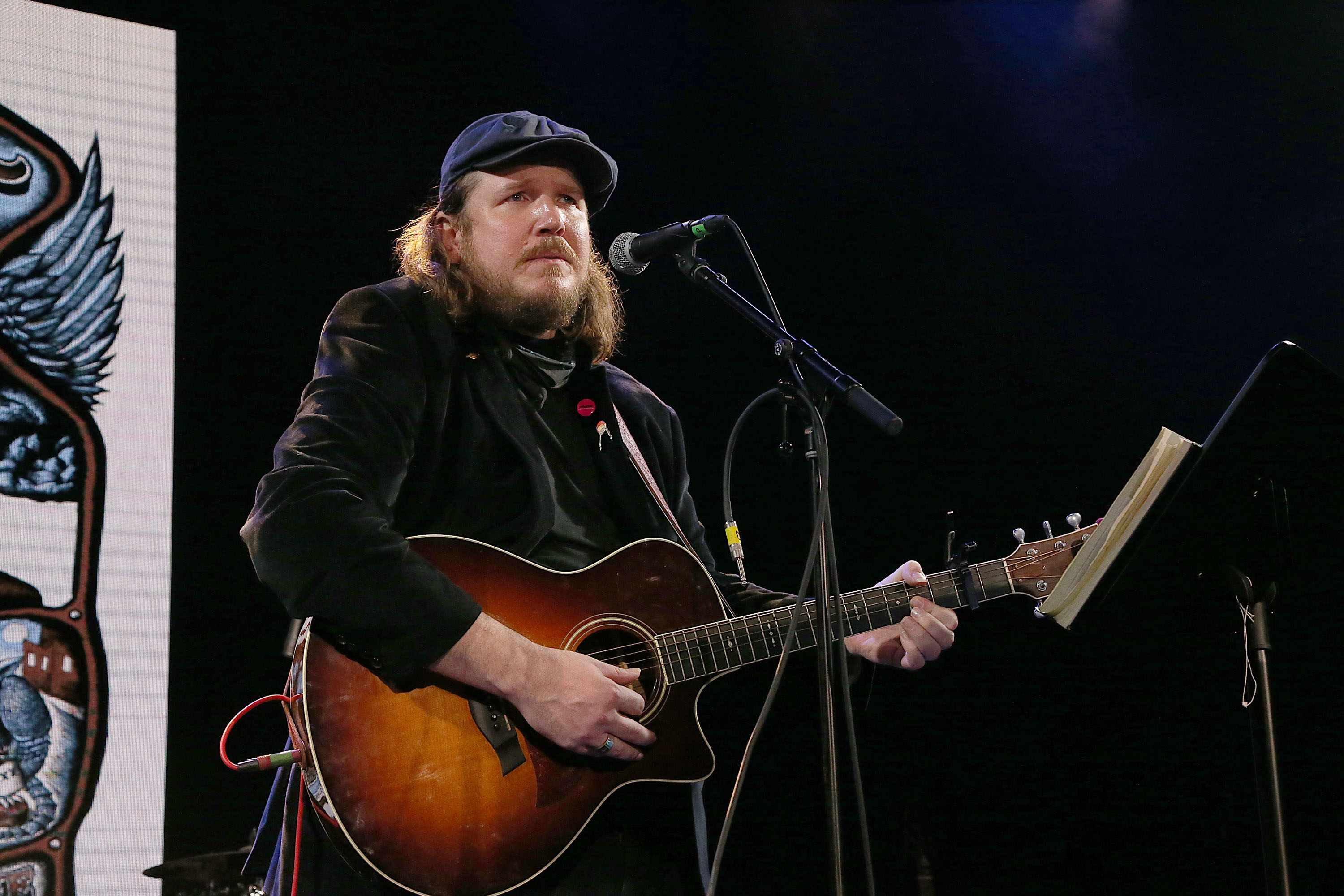 AUSTIN, TEXAS – AUGUST 16: Ben Dickey attends the afterparty for the screening of “Blaze” at Violet Crown Cinema on August 16, 2018 in Austin, Texas.

And roughly around the same time, Dickey ended up becoming pals with Hawke, who was married to Ryan Shawhughes, the best friend of the singer’s girlfriend. “He’s from Texas, I’m from Arkansas, we’re both kids of divorce and we both had to go back and forth between our parents thing,” Dickey says, “We both loved Southern culture and rock and roll and movies.” Over the next eight or nine years, the two men would bond over their mutual interest in Foley’s work. Dickey even helped out Hawke by being a glorified extra in the actor-director’s 2006 movie The Hottest State (“He said to me and my sweetie, “Hey, would you guys be the kissing couple in this scene?'”). But he wasn’t particularly interested in acting, and Dickey eventually decamped for Louisiana in 2014, intending to give music his full attention.

“Then, on a dime, New Year’s Eve 2015,” he says with a laugh. “It’s like Ethan got possessed [with Blaze]. He may have been percolating on it, but he didn’t let on that he was.” To hear Hawke tell the story, Dickey had been staying with at the actor’s house and sleeping on his couch when, late one evening, the singer picked up a guitar and starting reciting the stage banter banter from Foley’s posthumous concert Live at the Austin Outhouse. Suddenly, the concept of doing a Blaze biopic, an idea he’d been toying with for a while, didn’t seem so far-fetched anymore. “I said, ‘It’d be a lot of work. . . . Would you do it? Would you take acting lessons? Would you go down that rabbit hole?’ ” Hawke says. “He replied, ‘Fuck, yeah.’ The electricity went through my back.”

“I got involved in this to stand up for Blaze Foley,” Dickey says. He told Hawke he would be happy to do the music. Hawke wanted more: “He said, ‘I know I have to do this and I know you have to do this.’”

Complicating matters was Dickey’s roots/indie 2016 solo album, Sexy Birds & Salt Water Classics, which he had recorded piecemeal over the preceding years. “I was preparing to tour,” he says, “and Ethan was like, ‘Look, we can do this and we can start shooting in 10 weeks. If you want to do it, the preparation’s gonna be serious.’ So, I had to dam up my own songwriting and turn towards toward Blaze.”

He began studying Foley music with laser-like focus, especially the late artist’s singular playing and singing. “That loping three-fingered style with his voice rolling over it … it isn’t that easy,” Dickey says. “And I wanted to represent that to a T.” He also began studying acting with Vincent D’Onofrio, who teaches on the side. “Vincent helped me chop out all my overthinking. The basic rule is: ‘I don’t have permission to think.’ You have permission to flatly ingest that words that you’re supposed to say, and use your mind and your imagination to understand what the director’s asking … and then go breathe in front of a camera.”

Dickey also bonded quickly with both Sybil Rosen, Foley’s ex-partner and the author of Living in the Woods in a Tree: Remembering Blaze Foley, the 2008 memoir that Hawke’s movie is largely based on, and the actor Alia Shawkat, who plays Rosen in the movie. “I was listening to Blaze talk,” he says. “He has such a particular way of talking, and I wanted to represent that but not do an impersonation. And Sybil said, ‘Be yourself — and that’s Blaze.’ And Alia wildly generous to somebody that was as green as I was.”

After shooting wrapped, Dickey got to work on his next album, which his costar Charlie Sexton (he plays Townes Van Zandt) produced. And he’s the first to admit that embodying Foley and studying his work changed his own songwriting in a big way.

“About 20 years ago, I went through a period of only listening to Mississippi John Hurt,” Dickey says, “Just that simple ‘boom-boom, boom-boom,’ that two-step loping blues. Once I went deep into Blaze’s stuff and we started filming, the more I started getting into that lope, into how much you can do with so little. It recalibrated a bunch of my tendencies. I must’ve written 25 songs in two weeks. It’s like there’s been a secret revealed to me.”

In December 2017, Dickey recorded nine of those songs (and a Foley cover) with Sexton at Austin’s Arlyn studios; according to him, the album, A Glimmer on the Onskirts, is about hope in any form — “from, ‘Hey, lunch is in 10 minutes’ to ‘The house is on fire and someone’s bringing water.'” (He also recently shot a Western called The Kid, which was directed by D’Onfrio and stars Hawke and Chris Pratt.)

“I keep thinking about the lone, roving fixer,” Dickeys says. “The Eastwood character that comes roving in to bring justice, and Blaze having those ideologies of … ‘Just there’s hope coming, it’s out there, on the outskirts.'”