“In The Third Man, there’s no one getting kicked in the face.”

Director David Leitch isn’t saying the classic post-war thriller suffers from lacking a critical face-kicking element – but let’s just say his new movie takes full advantage of that missed opportunity. Set in East and West Germany in the winter of 1989 – the moment in which the Berlin Wall finally came down – Atomic Blonde sounds on paper like a John le Carré novel, pitting weary spies against each in pursuit of a list that could leave them all exposed. The former stuntman-turned-filmmaker, however, says he wanted to make something that was “not your daddy’s Cold War spy movie.” Silencers and poison were out. The business end of a corkscrew was in.

Three years ago, Leitch and his partner, Chad Stahelski, revitalized the action genre – and Keanu Reeves’ career – with the revenge thriller John Wick, which turned dozens of brutal headshots into the sort of choreographed ballet unseen since John Woo left Hong Kong. While the latter went solo for that movie’s recently released sequel, the former turned his attention toward the continued reinvention of Charlize Theron as a formidable action star after her electrifying turn in Mad Max: Fury Road. In Atomic Blonde, the Oscar-winning actor’s experience as a dancer feeds into an elegantly lethal performance as Lorraine Broughton, an MI6 agent who partners up with a shifty Berlin station chief (James McAvoy) to retrieve “the List” before it falls into enemy hands.

Bono: 60 Songs That Saved My Life

Working in a style he called “neon-noir,” Leitch builds the movie around a handful of gorgeously rendered action sequences, each with their own distinct flavor of brutal excess. While on the set of Deadpool 2, which he’s directing for release next summer, Leitch walked us through five of Atomic Blonde‘s standout set pieces – from Theron fending off Berlin cops with available household items to busting up multiple attackers in close quarters. (The scenes are scattered throughout the movie, all the way to the climactic melee – so the spoiler-averse should consider themselves hereby forewarned.)

1. Upon arriving in Berlin, Lorraine gets picked up by the wrong chaperones, leading to a three-way fight scene inside a fast-moving car – with one high-heeled red shoe serving as an improvised weapon.
“It’s funny. Coming from an action background, I always approach the action sequences in any script as kind of placeholders. When I originally got the script, that [scene] was a fight in an elevator at the airport, in the terminal. Doing this movie with the budgetary constraints we had … it was really done independently. We did it like John Wick. But we still wanted to find ways to expand the action, so I came up with: ‘Why don’t we do a fight scene in a car?’ It’s still contained, but we can have some driving shots. Something a little more exciting, but you still get that confined, mano-a-mano experience.

One of the standing orders for the action to the stunt team was, we wanted to use found objects as props. How could a spy who’s maybe outmatched by weight and size defeat a larger opponent? I think the red shoe was just part of those choreography sessions, where we sit around and brainstorm in our stunt gym in L.A., coming up with crazy ideas. It became apropos with all the wardrobe changes – the fun, pop sensibilities of the piece – that we could stage a major fight scene with a red shoe. It was perfect.

In the stunt world, fights and vehicles are often two different disciplines. For most of my career, I was heavily involved in the [former] – fighting and wire-rigging and choreography. The vehicle-stunt world is so specialized. But when you spend so long in it as a stunt coordinator, you’re exposed to all the disciplines, so it’s always fun to combine the two ideas – a car chase and a fight scene – and make something more dynamic. And people are doing it more and more now.”

2. Lorraine searches the apartment of a spy killed in an operation to retrieve the missing list. When the Berlin police arrive on the scene, she uses household items – including a garden hose – to fight her way to freedom.
“We were scouting in Budapest, and the original sequence was that she would meet these cops on top of a building; it would be a protracted, Bourne-style foot chase where you go rooftop to rooftop. You’d have to logistically secure these rooftop locations … you’re racking up location fees and need stunt-rigging with cranes. So I offered up a solution: ‘Why don’t we put it in a more contained space, and we can build an apartment set where the fight scenes can really go off?’ I find fight scenes actually more interesting, in a way, than chase scenes because you’re watching your character go through this problem-solving process and fight the antagonist mano-a-mano. It’s more powerful, more emotional.

We approached the scene like more of a Jackie Chan model where you can use found objects and have fun with props. We had the counter-weight-descender idea [Theron’s character uses a thug tied to one end of a hose to help her descend from a balcony] that I’ve been wanting to do for a long time: ‘We have to get this scene in the movie.’ So that’s what they came up with – pots and pans and kick-ass fighting. But it’s a combination of a practical location and two sets: an exterior façade for the building, for the jump, so we can have Charlize jump and tie her into the action; and a set piece where we can remove walls and get that long tracking shot of the tied-up guy getting dragged through the apartment. Something you couldn’t do on a practical location.

We constructed a set piece where she does the lead-up to the big jump, which we did on location. You’ll see a medium-wide shot where we’re pulling Charlize on techno-cranes and she vaults off, leaves the frame and jumps down, like, 10 feet to mats on stage. Then we cut to the wide exterior shot of Monique Ganderton, the stunt double, on a wire rig jumping, basically, off the real balcony. So you find ways to tie the actor in as dynamically as possible, and [Charlize] was always game.” 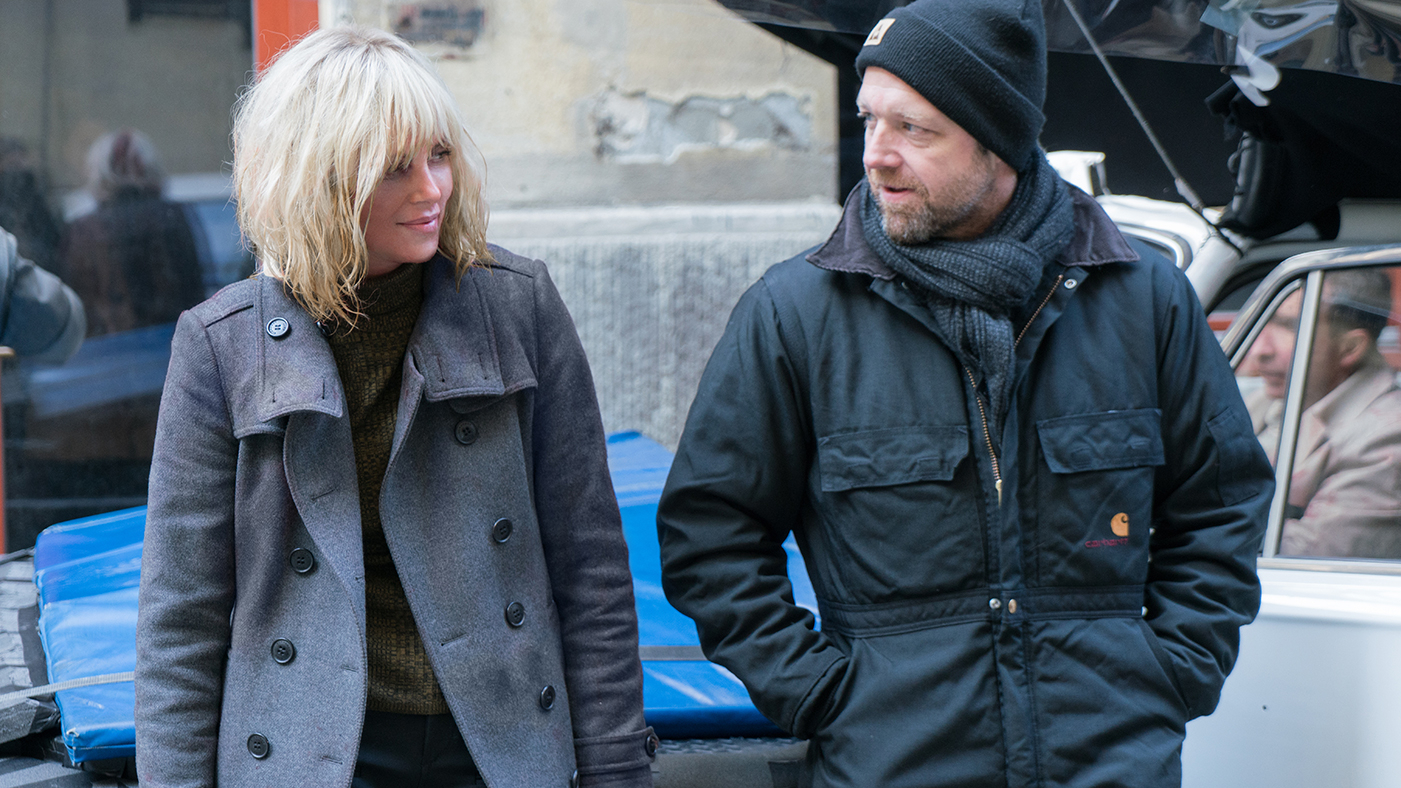 3. In what may be Atomic Blonde‘s action centerpiece, Lorraine gets into a protracted fight in an apartment and stairwell, in what appears to be (but isn’t) a single take.
“I wanted to do something that was really provocative and shocking to the audience. So the idea was to stay with the character and really feel immersed in the action – to feel every punch and [all of] her fear. Basically, we wanted to not give the audience a chance to take a breath. Psychologically, with the illusion of a single take … you’re always waiting for the cut. The edit makes you feel like you’re in a movie. So when you’re not seeing them, your mind goes to a different place.

Logistically, it’s probably assembling 20-plus shots. That being said, for those nine minutes of screen time … there are some really long pieces of choreography that involved coordination with stunts, special effects and actors. Everyone had to be on their game to get these long takes that were, like, over a minute long. If you messed up any beat in the middle, you had to start over. But it is assembling several takes. To do that, we used a lot of old-school camera tricks with whip-pans and lens-crafting, using frames to create split-screens. It’s not as high-tech as you think; it’s really a lot of clever, old-school filmmaking.

The [single-take forest assault] sequence in Children of Men was something that always really fascinated me when I first saw it. I think the departure we wanted to take is that, in that movie, the action goes on around a protagonist. What I wanted to do was, ‘Okay, she is sort of the trigger point of the action.’ So instead of watching explosions in the background and a war going on – she is the war going on. It’s going to feel physically exhausting, and also more unbelievable that you were able to keep the camera rolling for that long.

What’s great about Charlize is, when I said, ‘I want to make this special,’ the way to do it is to dive into the training:  do your own choreography and stunts. Never break character and never break the illusion in using the convention of the stunt double, or the over-the-shoulder shot of the stunt double and just your close-up. We need to see you do it in wide shots and long pieces. I threw down the gauntlet early, but she snatched it up willingly. She gave it 110%. Once she understood what we wanted to do, she was all over it.”

4. A one-on-one fight spills onto the stage behind a screening of the Russian science-fiction movie Stalker, as Lorraine and her assailant battle in silhouette before busting through the screen.
“Obviously Stalker and all of [Andrei] Tarkovsky’s works, visually, are touchstones for cinephiles. He’s an incredible filmmaker. And I’m not claiming to be his biggest fan, although I found it interesting when my production designer came to me and was like, ‘We need to pick a film that could be on the theater for the fight.’ The movie just happened to be playing in Berlin at that time, so I thought, ‘Let’s do it.’

During shooting, as we were getting closer to that fight – which was originally going to take place in a back hallway – I came up this idea of, ‘Wouldn’t it be great and stylish if we could just have it backlit and they’re fighting behind the clips? Can we find the clips?’ So the producer and David [Scheunemann], my production designer, went out to see if they could license it. We built a rear-screen projection scene; it’s supposed to look like they ended up fighting behind Stalker. It’s just one of those ideas that sort of gels out of this crazy pop-culture mash-up movie we were doing.

Spy movies have certain tropes, and we let the tropes be the tropes. But we just wanted to set a really exciting background for these characters – a heightened background and a stylish and fun one. An agent who wears stylish clothes and fights Russian bad guys? These are things in a lot of spy movies. We just wanted to take them to a heightened level and let you enjoy the ride. Atomic Blonde is about the characters’ bigger existential crisis and their world. It’s not so much the conceit of the spy game; it’s more that being a spy sucks. But we’re going to make it fun to watch.

5. The finale, in a luxury hotel room, pits Lorraine against her biggest adversary and his henchmen.
“The standing order to Jonathan [Sela], my cinematographer, was, ‘I want to make this entire movie feel like a protracted Eighties music video.’ It sort of gives you that throwback feel – though at the end of the movie, there’s sort of a transformation into something that feels more contemporary. We wanted it to be this moment of Lorraine’s ultimate redemption and getting out of the life finally closing the chapter in this moment where she had to play this triple agent. She sort of reclaims her life, and there is this metaphor in the slow-motion and the beauty – beautifying the violence that’s happening there.”