Steven Bognar and Julia Reichert still remember how they felt when they heard the news: It was 2014, and Fuyao, a Chinese company specializing in manufacturing glass for automobiles, announced plans to open a plant in the filmmakers’ economically depressed hometown of Dayton, Ohio. “It was really good news,” Reichert says by phone, pointing out that the rust-belt community was still reeling from the devastating closure of a General Motors plant in the wake of 2008’s Great Recession. That shuttering led to the loss of thousands of jobs. “[It] was a shock wave that was terrible. It was like a bomb going off in the blue-collar middle class of Dayton.”

“That plant meant so much to so many people,” Bognar adds. “There was a lot of hope that it could be like those old, good GM jobs. There was genuine excitement.”

The movie that these veteran documentarians made about what happened next is an engrossing chronicling of how that optimism eventually devolved into contentiousness — and how the “old, good jobs” that once defined our nation’s middle class may be gone forever. American Factory, recently Oscar-nominated for Best Documentary, follows American and Chinese workers as the new plant struggles to merge two cultures. It’s hardly a spoiler to reveal that the initial excitement didn’t last. What is surprising, however, is the way Bognar and Reichert maintain a scrupulously even-handed perspective, placing the blame on no one party in particular. Instead, the film argues that we live in a globalized, stratified society in which labor and management aren’t just on opposite sides — they’re practically sworn enemies.

“We had an opportunity to do a snapshot of what it’s like in the world where working-class people, regardless of where you’re from, [are] under more pressure,”  says Reichert. “Opportunities are fewer, the billionaire class is growing, and the possibilities for your lives are getting squeezed. This film asks big-picture questions: Is this the way the world has to be? Is this sustainable? Is this right?”

Ironically, American Factory was initially the brainchild of local and state government reps, who knew Bognar and Reichert’s earlier films — particularly The Last Truck: Closing of a GM Plant, a 2009 short the duo made about the end of the Dayton plant. “It was a huge hit in Ohio!” Reichert says, chuckling at her faux-brag. “But every public library had five copies and everybody saw it.” The government reps proposed the Fuyao plant as a worthy follow-up. This could be historic, she remembers being told. Everybody was in tears at the end of Truck; why, the powers that be wondered, didn’t they try to tell a positive story?

Fuyao was on board, although Bognar and Reichert insisted on total editorial control and unfettered access. Also, they didn’t want a dime from the Chinese company. “That surprised them,” Reichert recalls, “because I think they thought, ‘Oh, we’re going to pay these guys. We’ll pay them well to make this film.'” 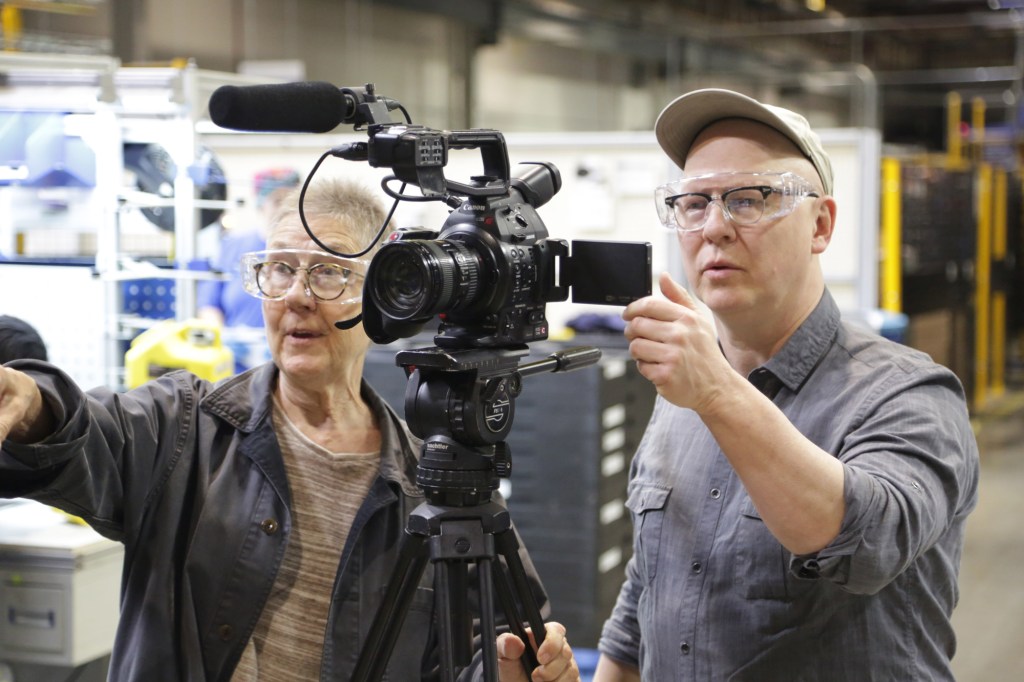 The couple started out with three cameras, which eventually morphed into five as they interviewed different employees and spent time in their homes. But as deeply embedded as they were, Bognar and Reichert soon realized that to tell the full story, they needed to bring on Chinese co-producers Mijie Li and Yiqian Zhang to help acclimate them to the customs and worldview of another country’s workforce. As a result, American Factory introduces us to people like Wong, a furnace engineer who’s devoted more than 20 years to the company and comes over from the mainland to help out; he talks about desperately missing his wife and two children, whom he won’t see for a couple years. If the American workers are coping with reduced wages, their Chinese counterparts find themselves marooned in a strange land in order to seek a better life for their families.

Still, early on, Bognar and Reichert sensed that this could be an uplifting tale. “There was a lot of goodwill going both directions [between the Americans and the Chinese],” Bognar says, “and that lasted a long time. But we started noticing the tensions growing when the plant was not making a profit after one year. What we heard repeatedly from the Chinese side is that, in China, they will build a factory from the ground up and it’s profitable after 12 months. When pressure started coming down on the Chinese workforce, then they put pressure on the Americans — and in many little ways, people started getting frustrated with each other.”

Over the three years that the filmmakers kept their cameras rolling, a narrative spine began to emerge: Concerned about lax safety standards and low pay, the American workforce considers forming a union, which Fuyao bitterly opposes. The American and Chinese plant workers forge bonds despite language barriers, while Fuyao chairman Cao Dewang becomes the closest thing to the movie’s villain — a ruthless businessman who offers a smiling face to his employees while plotting against the unionizing effort.

But in a sign of the film’s nuanced look at all its subjects, Reichert admits to some sympathy for the C.E.O. “He invested over half a billion dollars [in the Dayton plant],” she says. “He went against his family, and he went against the advice his country gave him. They all said, ‘Don’t go to the U.S.’ He’s exactly my age — he’s 73 within a month — and I think that’s one reason we liked each other so much.

“I mean, he’s a son of a bitch,” the filmmaker adds. “But he’s also a very deeply thoughtful, philosophical Buddhist. He’s a kind, caring guy…and he’s also is a brutal capitalist.”

“This film asks big-picture questions: Is this the way the world has to be? Is this sustainable? Is this right?”—Director Julia Reichert

Reichert’s allegiances are much more aligned with the workers; she describes herself as working-class. Indeed, for the first 18 months of the project, the couple “had no money at all,” recruiting co-conspirators who didn’t mind working for cheap. One of their cameramen, Erick Stoll, was Reichert’s former student. (“We paid lunch and gas,” she says.) Another, Jeff Reichert, is a filmmaker and critic who also happens to be Julia’s nephew. (“He would crash at our house,” she says. “We just paid his airfare, and we made supper and breakfast.”)

Despite their familiarity with labor issues, the documentarians was surprised during filming to learn about a decades-old industry known as union avoidance: the act of hiring these firms to discourage a company’s employees from unionizing. “It’s a multimillion-dollar industry that started in the late Seventies when the labor movement started its decline,” Reichert says. In American Factory, we watch as representatives from the Labor Relations Institute invade the plant, telling employees that they’ll get a far worse deal with a union contract. Employees are forced to attend mandatory LRI meetings — the filmmakers were barred from those meetings, although they obtained audio from one of them — and ownership starts finding ways to dismiss pro-union sympathizers. The full-court press has a chilling effect: The vote to organize goes down to defeat.

“I always say to audiences, ‘We believe in America,'” Reichert says. “‘We believe in fair, democratic elections. Do you think that [unionizing] election was fair when people were clearly fired because they were union supporters?’ That’s illegal, but you can always find a reason to fire somebody and walk them off [the premises]. It happens all the time.”

Netflix acquired American Factory at Sundance, receiving increased visibility when Higher Ground, the production company headed by Barack and Michelle Obama, boarded the project. And although Bognar and Reichert are very pleased about their partners, they’re also tickled that the film has found its way into China — where Netflix isn’t allowed.

“Filmmakers usually frown upon piracy,” Bognar says, laughing, “but in this case we’re really happy that people are watching the film all over China. The social-media comments in China have been really thoughtful. They’re asking soul-searching questions about China’s success and the costs of that success.”

And as far as the Oscars is concerned, Bognar and Reichert are honored to be recognized by their peers, and happy that the nomination for Best Documentary will bring more awareness to American Factory and its themes. But they aren’t hung up on awards. “We’re trying to make films to tell meaningful stories about…” Bognar pauses, almost as if he’s embarrassed to utter such a clichéd phrase. “…about the human condition. But the real gift to our lives is that people trust us — that people put up with us and our cameras. They put up with us knocking on their door or showing up at five a.m. and asking them nosy questions, and not going away — for month after month after month. Sometimes years.”