“Have you ever heard Rudy Vallee’s version of ‘As Time Goes By’?” asks Mike Mills. He’s been trying to pin down the vibe of his new movie, and after a few false starts, the 50-year-old filmmaker thinks he may have found it. “So play that song in your head for a second.” He waits for a few moments, so the sound of the old-timey crooner’s 1943 take on the American standard can echo through his listener’s skull. “Ok, now switch over to the Buzzcocks’ ‘Why Can’t I Touch It?'” he says, and the effect of suddenly, mentally dropping the needle on the first-generation punk band’s infectious 1979 hit is enough to melt your frontal lobe.

'Moonlight': How an Indie Filmmaker Made the Best Movie of 2016

“So imagine those two musical bodies of energy,” Mills continues, “and think of them trying to work in a mother-and-son dynamic. Those two forces butting heads … that’s the movie.” The filmmaker sounds happy that, after years of working on this script and decades living with a variation of this story, he finally seems to have figured this out. “That’s kind of the relationship I had with my mom.”

It’s hard watching 20th Century Women (opening in theaters today), Mills’ extraordinary ensemble piece about a young kid coming of age in late-Seventies Santa Barbara and being raised by an extended, makeshift family of females, without wondering how much of it is autobiographical. Like the movie’s young, confused hero Jamie – played by newcomer Lucas Jade Zumann – the writer-director grew up in the Southern California during the end of the Carter era, listening to punk records pilfered from his older sister. Like the movie’s free-spirited matriarch (viva Annette Bening!), Mills’ mom was a child of the Depression and an iconoclastic woman with a penchant for big-band music. He’ll be the first to tell you that there plenty of other pilfered aspects of his past in the mix as well, ranging from Greta Gerwig’s older art-school mentor to Elle Fanning’s late-night confidante. Not to mention both of those aforementioned songs.

But even if the former graphic designer and hip music-video auteur hadn’t explicitly mentioned the familial parallels, his movie brims with the sort of insider-y intimacy and knowing period details – that namedropped feminist literature, those funky-as-hell Cali-fashion statements – that screams first-hand knowledge. The last thing Mills wanted to do, he says, was make “a self-absorbed memoir.” But by digging deep into the personal, the hope was that he’d strike a universal chord about the importance of nurturing, smart, savvy women in both a young man’s life and society at large. “Because I knew women like my mom and my sisters and friends,” Mills declares, “because I love them so much and they confuse me, and I still have such deep, unresolved feelings about them – ironically, that was the best route for me to make something that was actually for everybody. I didn’t want a therapy session. I wanted a story that I could share.

“People have been referring to this as a love letter to the women who raised me,” he adds. “But that’s kind of over-the-top.” He searches for another analogy. “It’s more like a nice, handwritten thank-you note.”

The idea to draw on his experiences growing up and his push-pull bond with his mom, who passed away in the late Nineties, was something that occurred to Mills while he was making the press rounds for his second film Beginners, which detailed the story of a grown man reconnecting with his fresh-out-of-the-closet gay father. Anyone who had noted that there would be similarities between the characters onscreen and Mills and his own dad, who also came out late in life, would not be wrong; folks who would have thought his next project would naturally deal with the other side of his family by default, however, would be off the mark.

“There was no sense of ‘well, Mom needs equal time,'” he confirms, laughing. “But there’s that thing about the more specific you get, the more universal something becomes, and Beginners really proved that to be true. There would be times when I was at, you know, the Denver Film Society or at some Atlanta megaplex doing Q&As – when people had gone into the movie not even knowing it was about a geriatric gay man – and I’d talk to these audiences who really, really connected with it. It was like, oh, so you can be personal and not be self-involved? That was a revelation.”

Having felt like he now had license to follow the dictum of “write what you know,” Mills started to look even further back to his childhood, when he was growing up in a city that was close enough to L.A.’s burgeoning punk scene yet just far away from it to feel like it might have been Narnia or Oz. He thought of his sister Meg, who, like Gerwig’s in-house boarder Abbie, went to art school in New York, fell in with the avant-garde crowd and returned home after getting diagnosed with cervical cancer. He thought of several girls he knew in his formative years who’d tell him about their hectic home lives and sexual escapades – “which, obviously, did not involve me in the slightest” he jokes – and who informed Fanning’s amalgamated blond girl next door.

And then he found himself zeroing in on his mother, a woman who’d trained to be a fighter pilot during WWII (the war ended before her training finished), who chain-smoked and who affected a definite bohemian persona – the one who helped guide Mike through adolescence because “my dear, sweet gay dad was not present. He was around, but not, like, emotionally present. That was all Mom. She was like Bogart meets Amelia Earhart.” As he began to write the script, he gave the character of Dorothea a lot of her characteristics, while steering clear of making her a carbon copy. “I never write with actors in mind,” Mills says, “because you never get the people you want when you do that – it’s like you jinx it. But at some point, I thought, Annette kind of has that same punky vibe. She reminded me a lot of her.” He sent her agent the script. “It really came down to one important question,” he says, mock-somberly. “‘So Annette Benning, do you like my script?'” Then Mills cracks up.

“Oh, I had no idea who this woman was, at all,” Bening admits, when asked later what she saw in the character. “It was more like, I read it and my head exploded. I mean, I’d seen Beginners and heard Mike interviewed, but this … I grew up in San Diego, so I knew the landscape. I remember the time period; I knew those people. I found myself putting the script down and digging in my closet, going ‘Wait, do I still have that macramé-fur handbag that my boyfriend’s bisexual sister gave me back then?’ So it was sort of a given after that.” 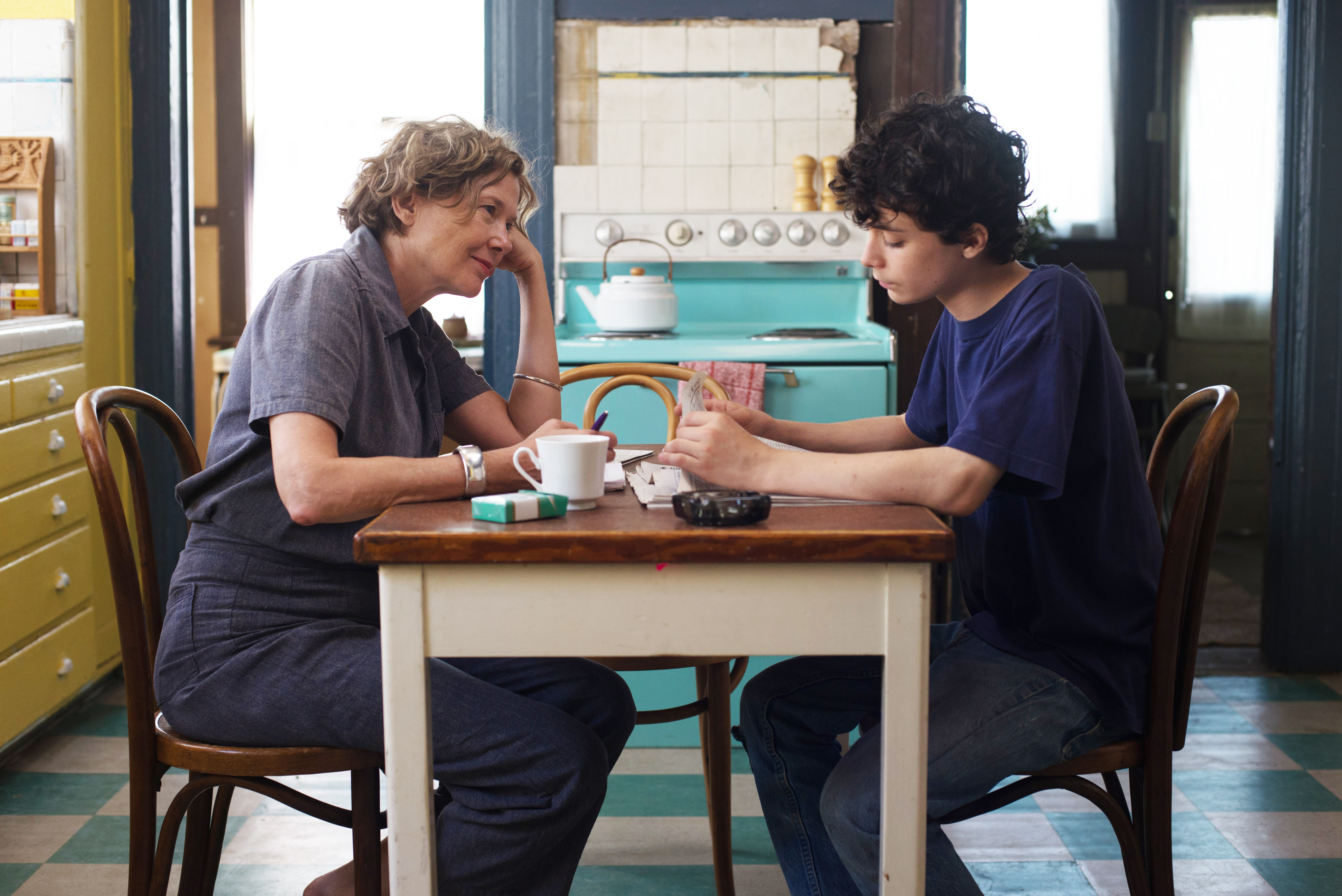 When Mills and Bening started talking about Dorothea, the actor claims that neither of them wanted her to be an imitation. “But there was a lot of ‘tell me all about your mom’ discussions independent of talking about the movie, oddly enough,” she says. “We both shared an obsessive love of talking about her. It wasn’t like, so what is this character like? It was, ‘I want to know about the time your mother did this or that.’ I knew she was the point of departure. And she just sounded fascinating.”

Once she came on board, Mills began filling out the rest of his cast. He wanted to Gerwig to play Abbie, Jamie’s dyed-redhead guide to the world of spirit-of-’79 performance art and punk, because he’s a huge Frances Ha fan “and she’s one of the few modern actresses who you could believe actually listens to Suicide, Siouxisie and the Banshees and the Raincoats.” He liked Fanning not only because “she looks just like one of those pretty Santa Barbara blond girls from the 1970s,” but “she can go to these really dark places on a dime, and that’s what my friends were like.” Zumann was “a Hail Mary pass” after seeing over 350 actors for the role; for William, the sensitive-male handyman based loosely on someone he knew as a teen, Mills cast Billy Crudup, who “looks just like a young James Taylor, which is kind of perfect.”

And while the writer-director magpied other personal elements into 20th Century Women – a dinner-party outburst about menstrual pride came from an anecdote that his wife, author-filmmaker Miranda July, told him; Louis Armstrong’s “Basin Street Blues” soundtracks a key scene because that was the first song Mills ever played his son – he was adamant that this not turn into a recreated home movie. “The thing I kept saying to all of them was, let’s not be precious about these things,” Mills admits. “I mean, I can tell you where this particular scene came from, or what was happening in that person’s life at that time. But change something if you don’t relate to it. Make it your own. Honestly, after working on the script for three years, I was so fucking happy to hand this over to other people and tell them, ‘It’s now up to you to breathe life into this.'”

And more importantly, he says, he wanted a feminine perspective firmly embedded into the film, which meant relying on his cast to infuse their own life experiences into the mix. “The thing about Mike is, he’s a real feminist,” Gerwig says, when told about Mills’ comments later that day. “A lot of men are in theory, but it was in the water for him when he was being brought up. And instead of relying on his memories, he went back and interviewed a lot of women he knew about that time in their lives, to make sure it felt right. He wanted to put himself in the place of not knowing. Which is rare for anyone, much less a male writer-director.”

“I was raised by women,” Mills declares, before he says goodbye, “and they taught me what it meant to be a man.” He singles out a scene in which Bening and Crudup put on a Black Flag record, in order to better understand what her son is listening to; confused by the hardcore they’re hearing, they switch it out for a Talking Heads tune and begin joyously dancing around the room. “But more than that, my mom taught me to be authentic and free,” he says. “She loved Glenn Miller. But she could find something in the Talking Heads to dance to. So in many ways, the kernel of this movie is my acknowledgment of that.”