15 Things We Learned Hanging Out With Jared Leto - Rolling Stone
×

Whatever Suicide Squad‘s box-office fate, Jared Leto isn’t done with the Joker: In interviews for his Rolling Stone cover story, he says he’s signed a contract that commits him to the character for a while to come. “They take your blood and your toe nails, as well,” he deadpans. “They’d be fools if they didn’t do that. It would be fun to jump back into the Joker. It would be an honor to do that again.” Here’s more of what interviews with him (and his collaborators) revealed:

Leto’s found his unconventional path to music and movie success by following his instincts.
“I have always tried to listen to my gut and to do what I’m compelled to do,” he says. “It’s not often the cleanest choice or the safest choice or the choice that’s going to make everybody else happy. I listened to myself and maybe other people I like working with or that I care about, like my brother. And made decisions based on what would be the best for the work, for me, for us. I think that’s a pretty good way to operate; I would recommend it. It’s been, at times, uncertain. Which is really good and also kept me terrified. Because safety, doing what is thought to be the ‘right’ next move, feels good.”

Jared Leto: The Unlikely Triumphs of a Rock-Star Movie Star

At least when he’s home in L.A., Leto doesn’t go out much.
“I don’t visit places that are known hangouts and places where you would be photographed,” he says. “It’s not even like I’m purposefully avoiding it for that reason. I just don’t go to there. When I’m in L.A., I’m either working in the studio or at home. LA is the kind of place where you can make a nice home for yourself — it’s not like you need to get out of your one-bedroom apartment. It’s pretty pleasant.”

He embraces failure.
“The thing I think about is how much that I’ve failed,” he says. “A lot. More than most. That’s where you learn the biggest lessons. I wrote 1,000 songs just to get 10 on a record over the course of years. You whittle it down. The same way you do 50 takes on the set with David Fincher, just so you get one that’s good enough — or maybe it’s 100 takes with Fincher.”

During his long break from movies last decade, he questioned himself as an actor.
“I wondered whether I had anything to offer,” he says, “and if I was interested in pursuing it. I had a very full plate with music at that time, and I knew that I had to put everything into this one area in order for it to work. At that point, the impossible was happening. We were playing arenas around the world and headlining some of the biggest festivals in the world. We really watched something grow and build and it was like, you know, we knew we had to. It was necessary to do that sort of thing, to focus, to commit. And I’m glad I did that. I have no regrets. ”

As of July, Leto’s band, Thirty Seconds to Mars were “80 percent done” with their next album, due next year.
“It’s a very different album,” he says. “I think we’ve done a pretty good job of letting go of our past a bit each time. There’s a real evolution on this album. With every song, you have to remember, you have permission to redefine yourself, reintroduce, reimagine and to do whatever the fuck you want to. There are no rules. You have complete permission to do whatever you desire and that’s intoxicating” Leto’s brother and bandmate, Shannon, says the album will “be more stripped down … real simple. Really clean, more clarity, if that makes sense.”

Leto has trouble imagining the end of the band.
“I think of the band as an extension of our life,” he says. “It’s not our job – it’s so much of who we are. I don’t. It’s so personal. I don’t think that it would ever really be gone. But I don’t know if we’ll tour the way we toured in the past.” Adds Shannon, “That’s something that’s an ongoing conversation. We’re going to keep making music as long as it makes sense. If the connection’s not there with music, we’ll stop making music. There has to be a love there. If that starts disappearing then, onto the next thing. 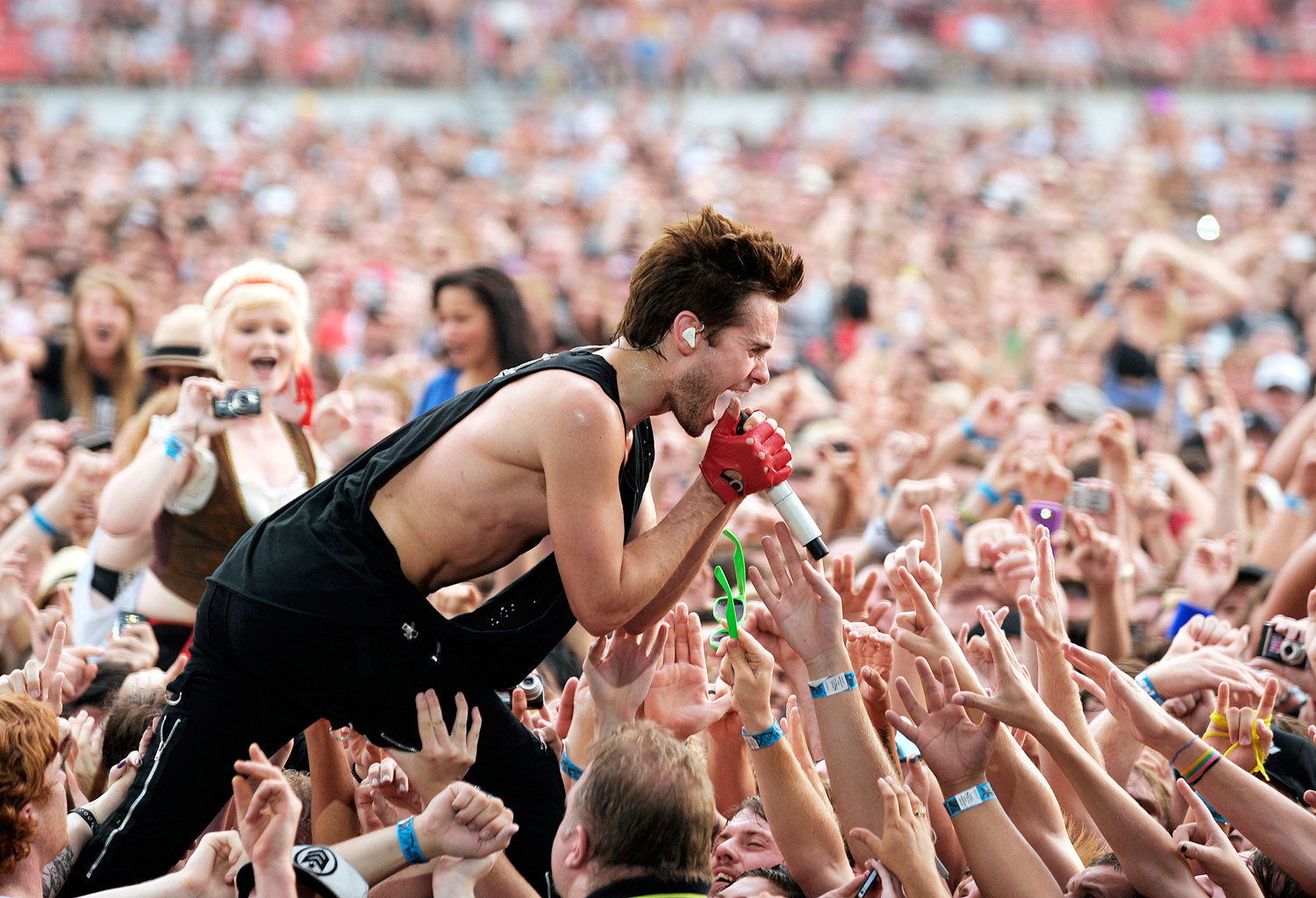 Leto thinks some people assume he’s “wasted all the time, that I’m just this party guy.”
People say, ‘My friend thought that you were fucked up at this thing,'” he says. “I’m like, ‘What? What are you talking about?'”

He tells other actors that it’s okay to lose weight for roles, but that they should reconsider gaining it.
“Once you gain 67 pounds or whatever I did [to play John Lennon’s murderer in 2007’s Chapter 27], you’re never really the same,” he says. “Even if you lose it, it’s really hard on your body. I’ve had actors and directors call me and say, can I ask you a few things about weight gain? The first thing I say is, don’t do it. I’ll spend 15 minutes on the phone with anybody, trying to talk them out of doing it. It’s like, just put a pillow in your shirt.”

But he’s not anxious to slim down again for a role.
“I’m kind of over it,” he says. “You have to make just as much of a transformation in your mind. The body part of it gets a lot of attention because it’s easy to notice. But can you imagine if I would just wing it? ‘Oh my god, he’s normal!'”

Years ago, he wanted to play doomed outdoorsman Christopher McCandless in his own adaptation of Into the Wild.
“I actually tried to contact the family,” he says, “and I guess Sean Penn had been speaking with them.” Instead, Emile Hirsch ended up playing the part, with Penn directing.

Leto thinks the steady progression of his career has helped him stay grounded.
“I never woke up one morning and I was rich and famous,” he says. “I had a nice slow burn. I have never had like an overwhelming, film success where it was like, oh my god, the world changed and I’m grateful for that. I’ve had awhile to adjust to things as they’ve gone on. I’ve never woken up with buried in a pile of money and success. And I’m grateful for that. But Dallas Buyers Club and winning an Oscar — I’ve been in the business for a long time and I would never say that wasn’t life changing. It was an incredible experience.”

Leto has one beauty tip. “I would tell everyone to sleep as much as you can. A lot of people don’t sleep enough, that’s a big one.”

He has weird dreams. “I have the craziest post-apocalyptic dreams,” he says. “It’s insane. Things out of science fiction books. Or I’m flying or something over a city The wildest dreams. Hyper-real dreams. The first Thirty Seconds to Mars album was based a lot on dreams. It was about space and dreams. At the time there were so many people screaming about their dads and shit — It was like an indulgent me, me, me thing. There were other things to sing about. I was more interested in imaginative, conceptual stuff.”

Leto could see himself retiring from showbiz, or at least acting, at some point.
“I think I could just walk away,” he says. “There’s a big world out there. There’s a lot to explore. Some people have fun doing it into their 80s or 90s and there’s great examples of directors and actors doing wonderful work as they’re older, but I don’t think that I would. But what the fuck do I know? I have no idea. I think it would be interesting to explore other avenues.”

Rapper/actor Common happily compared and contrasted Kanye West with Leto’s Joker.
“Kanye definitely is not as dangerous as the Joker,” the occasional West collaborator — who has a small Suicide Squad role — says. “He doesn’t have that dark, evil energy at all. Kanye is a lot more compassionate and expressive and passionate. The Joker has a lot of things stirring up in him that you don’t know and that’ll come out at the end of the conversation.  Kanye will let you know at the beginning, ‘This is what I am thinking, and it’s not meant to harm you — it’s just to let you know where he stands. But the Joker will toy with you. He’ll take you to different places and be setting you up to destroy you.”