The cast and creators of Star Wars: The Last Jedi had a whole lot to say in our new cover story – from writer/director Rian Johnson’s revelation that he considered making Luke Skywalker blind to Adam Driver’s confession of total emo ignorance to Daisy Ridley’s declaration that she was done with the saga after the next movie (she’s since attempted to walk that one back). But our in-depth interviews for the article yielded even more revelations that didn’t quite fit. Here’s what we learned.

1. J.J. Abrams couldn’t resist returning for Episode IX, out in 2019. “I had no intention to return,” says Abrams, who directed 2015’s The Force Awakens.  “But when the opportunity presented itself to finish a story that we had begun with these new characters, to tell the last chapter of their story, it felt like there was a chance to do it in a way where we could go beyond, and  do better than we did in Seven. I learned so much in that movie and I saw that this was a chance to sort of realize something that we hadn’t quite achieved – and part of that was it was simply the beginning of these new characters and their story. The opportunity to sort of take what we had learned, to take the feeling of who these characters are and what they are and give them a final chapter that felt in the spirit of what we begun? It was too delicious of an opportunity to pass up.”

2.  Ridley cried when she heard Abrams was coming back. “Everyone was saying it was going to be Rian
and everything, so I was genuinely quite surprised,” she says, “and was like ‘Oh my God!’
and I started crying immediately with three people in the office. And they were
like, ‘What the fuck just happened?’ So I emailed J.J. saying, ‘Oh my God I am
crying.’ And he goes, ‘Oh my God, me too.’ And then we had a conversation a few days
later and we stay in touch. But we stayed in touch the whole time anyway.”

3. As he shaped the story for Last Jedi, Johnson found it challenging to grapple with the “patterns” in the Star Wars movies.  “It was a real process,” he says. “There’s a lot of possibilities with how to take it… Even just as a Star Wars fan, you realize there are patterns etched into your brain of how you think it should go.  It’s tough, because you don’t want to let yourself be guided by those deep-set grooves in your brain, but you also don’t want to make creative decisions just to spite those. It’s an interesting line to ride. I felt that I had to be conscious of those patterns and those grooves. Whether I was going to subvert them or play along with them. You could say, ‘I’m going to just ignore them and tell my story,’ but then you’re fooling yourself and you’re probably just going along the same path. I had to be conscious of them and even incorporate them. This can’t drive it, but you have to incorporate them, almost in a meta way, into the narrative itself.”

4. For Johnson, the identity of Rey’s parents is less important than the character’s reaction to the information. “What does it mean to her, what does it mean to us,” he says. “I really, really believe that it has to be rooted in something that has an emotional impact, and that’s the only thing that matters. Surprise is fine, but surprise by itself is cheap. The emotional and deeply-rooted resonance of ‘I am your father’ [in The Empire Strikes Back]  is why we remember it. Not because, ‘Oh my god, I never would have guess that he was.’ Now especially that that’s set as a pattern, the audience’s expectations are now that, ‘Oh, you’re going to pull something out of your hat for this or that.’ And you can, and that’ll be fine, but you better damn well make sure that it also means something and is satisfying beyond just the, ‘Oh, it was this,’ reveal.” 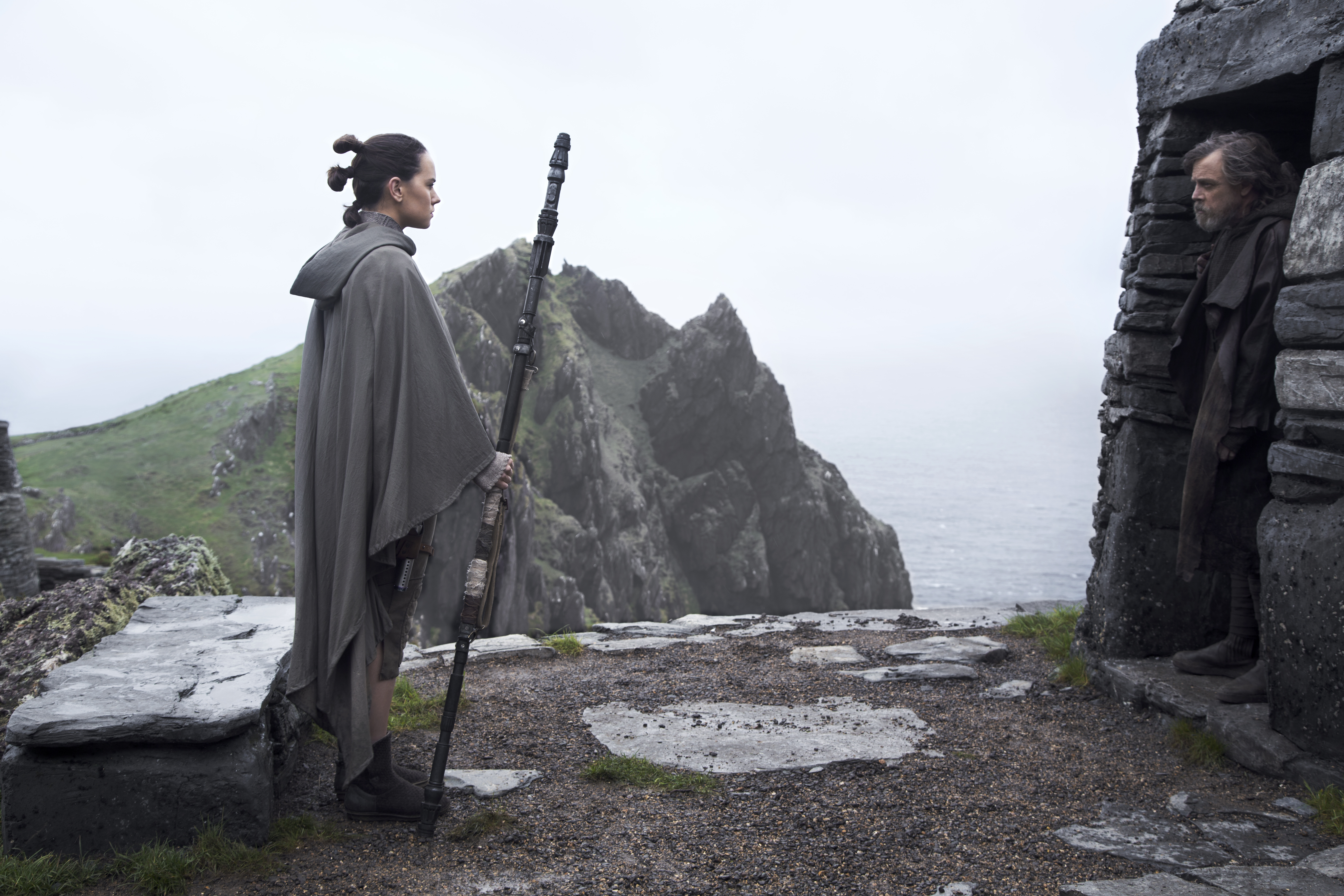 5. The lead characters’ histories will play a larger role this time. “There is more tying to things about the past,” says Ridley. “There really wasn’t that much tying in Force Awakens, because we were literally on a physical adventure, but I love knowing where we’re going and why people are making the choices they are making. Which again are totally influenced by the past.”

6. Johnson paid special attention to the flashback in The Force Awakens that gave clues to Rey’s past – but he also watched the rest of the movie “a thousand times.” “I love The Force Awakens, and my job was to continue that story in every sense of the word,” he says. “So in that way, J.J. gave me everything I needed, which is the first chapter of a story. I need to tell a second chapter, which is a failure if it doesn’t continue organically what the first chapter started. So what seems like a blue sky suddenly turns into hacking in the jungle, finding a path that exists. Just like any process of writing, it’s more excavation than sculpture. You’re finding it as you go, and you realize it wants to be a certain thing. So yeah, the flashback was essential, but the dynamic between each of the characters was essential. Every single thing in The Force Awakens, I studied forensically.”

7. Porgs, the lovable, fuzzy little creatures in the film (already controversial among some Ewok-hating fans), had a simple origin story. “When we first scouted Skellig Michael, the island where we shot Luke’s stuff, it was covered in puffins,” says Johnson. “It’s a bird sanctuary, actually. So there were all these adorable little puffins all over the island. It was first just like, ‘OK, let’s come up with the Star Wars version of that.’ Also, I knew that I wanted any opportunity for lightness or comic relief I could find on the island. So that combination led to the Porgs. I apologize. [Laughs] No, I love ’em, I really love ’em!”

8. We will see something “more interesting” from Gwendolynne Christie’s Captain Phasma. “Definitely more physically dynamic,” promises Christie. “I think there’s something extremely interesting about a battle of wills, don’t you? Force Awakens set up this relationship between Captain Phasma and Finn. I love that John Boyega, who is wonderful, describes Captain Phasma as the ‘worst boss you’ve ever had.’ Rian used to say that too, before we started shooting. There’s something about this relationship that is undermining, vindictive and feels belittling.”

9. At the very beginning of the creative process, Johnson hung out with Lucasfilm’s Story Group because he didn’t want to go nuts writing alone. “I really wanted to have somebody to engage with while I was breaking the story, even before I started writing,” he says. “For me, the scariest thing was coming into this and just doing it alone. I had visions of being Barton Fink – locked in a room, and it was due six months ago and I have three paragraphs written. That was my biggest fear. So the first thing I did was move up to San Francisco for three months. I was still coming up with the story. For me, I outline outline outline, and I notebook notebook notebook, then the last 10 percent of the process is actually typing the script. I plan it all out first. So while I was doing that, I was going in twice a week and sitting down and just vomiting these ideas out and talking them through with [Story Group development lead] Kiri Hart and her whole group.”

10. But the Story Group – who are known as continuity guardians – didn’t have to do much reining in to keep Johnson in tune with the saga’s growing new canon.  “That was part of it,” he says, “but probably a smaller part of it than you would think. Because I was drawing forward from The Force Awakens, and also because I have had Star Wars implanted in my brain for the last 40 years, and I was trying to make a Star Wars movie. It’s not like I was saying, ‘and then they beam down to the planets.’ [laughs] I know the mythology we’re operating in. There weren’t a lot of things where I had to be batted back into the cage. No, truly, the real usefulness of it was that they’re really smart, cool people who I trusted, who I could toss stuff out [to]. Also, it was a lot less them saying, ‘No, you can’t do that.’ It was a lot more them giving me permission to do things that I was like, ‘Can I do this?’ Especially when you’re doing something as big and scary as a Star Wars movie, just being given that permission to be weird, I guess, that, more than anything, was really useful.”

12. Though Carrie Fisher had finished shooting the film before her tragic death in December 2016, she hadn’t completed ADR – the customary in-studio re-recording of dialogue – which posed some technical problems. “We had to do a lot of
sound work and that was kind of tough, but we managed,” says Johnson. “We have a great sound
team and we managed to pull her dialogue out and find little snippets from here
and there and make it work. You do what you’ve gotta do.”

13. As the first Asian-American woman to star in the saga, Kelly Marie Tran (who plays new character Rose Tico) feels pressure. “I would love to live in a world where no one person has to represent a very large group of people,” she says, “just purely because of the fact that there’s not many of those types of people in movies or TV or writing or producing or directing. I would like to live in a world where there are a bunch of different types of people doing those things. But obviously we don’t, and it’s something I think about a lot. I don’t take it lightly at all. Me and John [Boyega] talked about that too. Just the idea that we are people of color, that’s something we always address in interviews. We actually had this one moment on set that I still hold really close to my heart. This one day we were shooting this scene and I remember John stopping and saying, ‘Kelly, we’re making history right now,’ and we were. Because not only are we making a Star Wars movie, we have scenes where it’s just John and myself.”

14. Hamill expects it will take a while before he decides what he really thinks about The Last Jedi. “The movie is finished, it belongs to the public,” he says. “So if people are expecting me to come out and weigh in with what I think about it, they’re going to be disappointed, because it takes me a long time. I’m just about ready to talk about Empire Strikes Back! [laughs] And then I’ll get on to Return of the Jedi. Because it takes me a long time.”