The Toronto International Film Festival is a grab-bag — all fests are, of course — but the 43rd annual edition of what’s arguably the major North American film event of any given year felt like an especially whiplash-inducing, something-for-every-film-nerd get-together this year. You could walk out of a prestige-seeking, Oscar-courting drama about parents dealing with drug-addict kids (there were a few to choose from) and right into a an eight-hour Chinese documentary about Communist “re-education” camps. You had your choice of watching Natalie Portman, Elle Fanning or Lady Gaga play pop chanteuses — or see actual footage of one of the greatest opera stars ever trilling out high notes. Would you prefer Julianne Moore boogieing to Laura Brannigan’s “Gloria” or a rigorous German movie about the end of humanity? When it comes to science fiction, are you in the mood for something Swedish or simply a futuristic parable involving Juliette Binoche and a literal sex machine?

Toronto Film Festival 2018: 'A Star Is Born' Is Damn Near Perfect

Now that the dust has settled and we’re closing the door on TIFF 2018, here’s a look back a dozen of the best things we saw over the past week-plus. Apologies to the numerous movies we were dying to check out and somehow regrettably missed; we hope to catch up with you soon. A Bronx cheer to the disappointments that wasted our time, especially if you had unreliable narrators. And special shout-outs to: Ash Is Purest White, Burning, Halloween, High Life, If Beale Street Could Talk, Long Day’s Journey Into Night (especially that mindblowing 3-D second half), Museo, Outlaw King, 3 Faces, The Trial and Walking on Water. 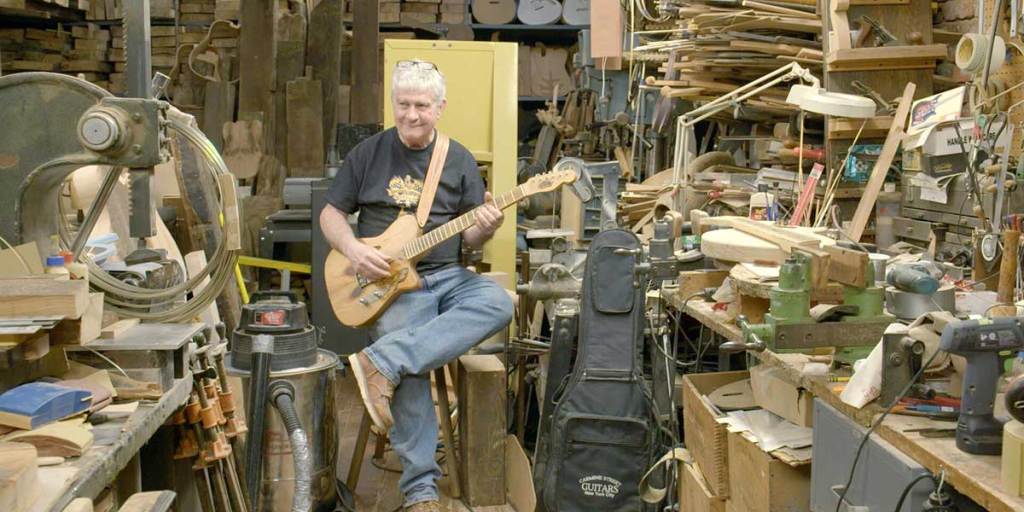 Carmine Street Guitars
A gentle, warm, immensely satisfying portrait of a West Village institution, i.e. Rick Kelly’s custom guitar shop. Filmmaker Ron Mann documents a work week in the life of this old-school storefront — and a surprisingly celebrity-filled five days at that — as the seventysomething owner and his young apprentice use repurposed NYC wood to fashion custom, intricately designed axes. Notions of community, tradition, gentrification and maintaining something small and intimate in an increasingly corporate world are dealt with deftly and never hit-you-over-the-head dogmatically. All this, plus you get Bill Frisell playing the central “Surfer Girl” lick. 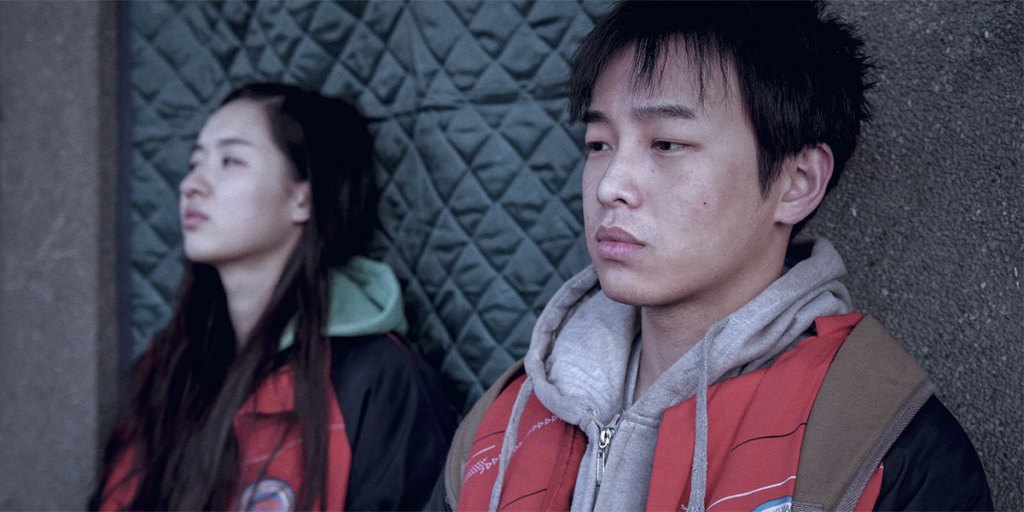 An Elephant Sitting Still
Chinese filmmaker Hu Bo takes four story strands — involving a gangster, a bullied schoolboy, a female student and a retired elderly teacher — and, over the next four hours, interweaves them as the characters eventually meet up for a collective date with destiny, if by “destiny” you mean a train ride in search of a mythical sitting zoo animal. It’s a jaw-dropping, ambitious debut film, the sort of marathon-length movie that somehow feels too short. And though it’s a drama filled with images of death and despair — all of which take on an extra layer of resonance when you know that the gifted young artist committed suicide shortly after finishing the project — it’s also a film that brims with humanity no matter how hardcore pessimistic it gets. Phenomenal. 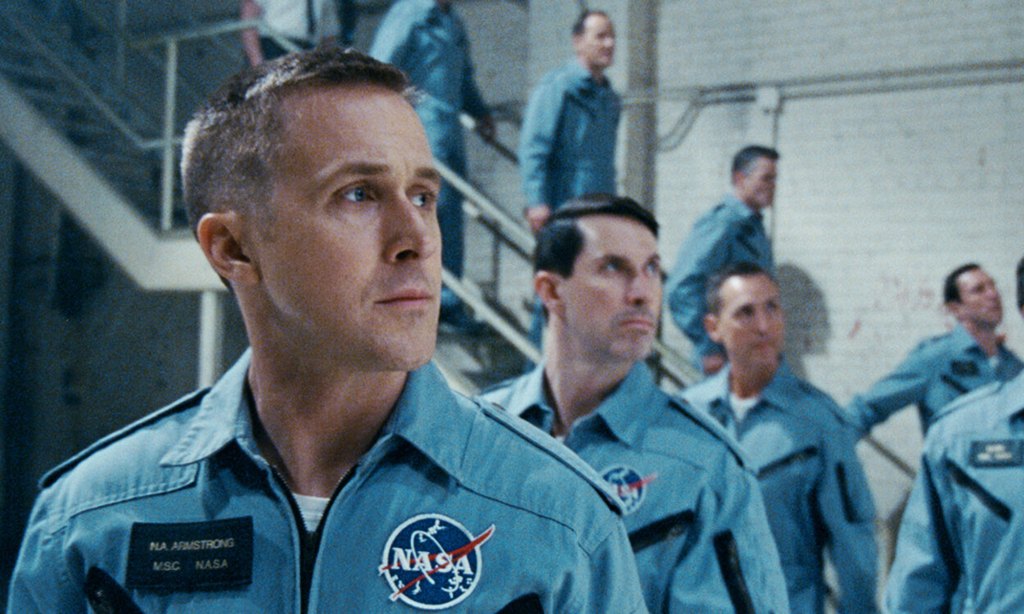 First Man
Space biopics — the final frontier. La La Land‘s Damien Chazelle reteams with Ryan Gosling to tell the story of Neil Armstrong, an aeronautical engineer who tested planes up in the stratosphere and participated in a few other notable flights as well. Early word out of Venice, where First Man had its world premiere, was that it was too chilly for its own good, though you wonder if those folks mistook its subject’s cowboy-like stoicism (Gosling’s face is the second most placid surface in the movie) for a remoteness on the part of the movie itself. It feels almost impossible not to be moved by any number of moments here, from Claire Foy letting the archetypal astronaut’s wife finally losing her cool to the last awe-inspiring 20 minutes, where giant leaps make history. A week later, we still can’t get some of those proto–avant-garde sequences of shaky rocket travel and that silent lunar stroll out of our heads. 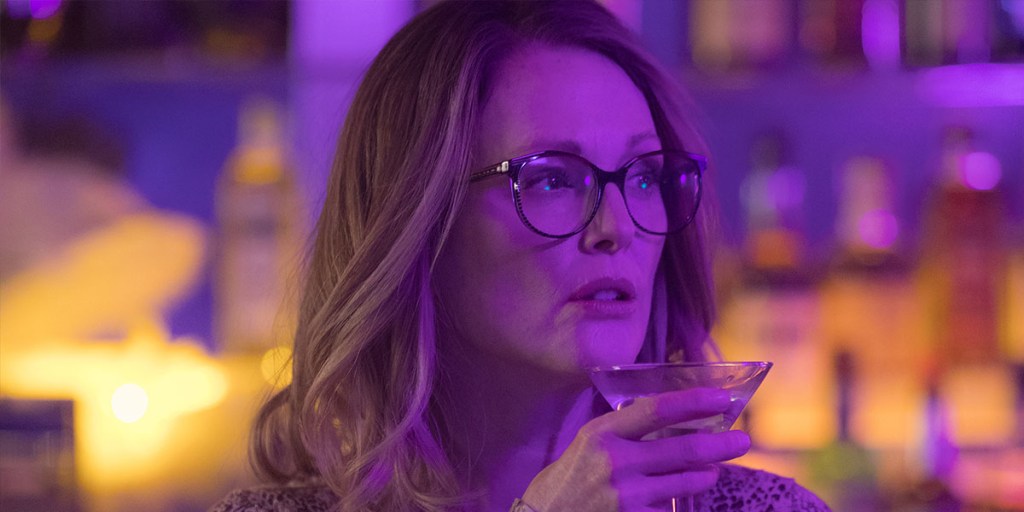 Gloria Bell
In which Chilean director Sebastián Lelio remakes his own 2013 dramedy about a single older woman looking for love in all the wrong places and avoids the curse of the English-Language Remake. He somehow finds new notes to play from this tune, courtesy of Julianne Moore’s take on the title character — this is a canon-level performance — and John Turturro as her commitmentphobe romantic interest. (Also some kudos to Brad Garrett, who almost steals the movie as her nostalgic, fumbling ex-husband.) It plays off the original without making you feel that an American redo is automatically a sellout. And who would have thought that one of the single most inspiring moments of 2018 would involve Moore, a paintball gun and “Total Eclipse of the Heart?” 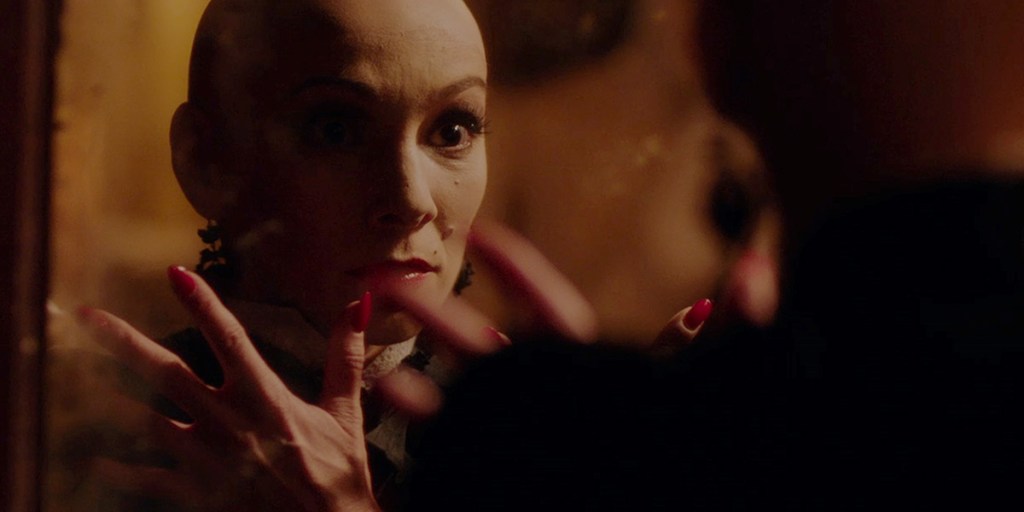 In Fabric
One haunted dress, two customers, a half dozen witches and an unlimited amount of fetishistic perversity — why yes, it is a Peter Strickland movie! The British filmmaker who gave the world The Duke of Burgundy continues to excavate the darker, danker corners of Eurosploitation cinema and British horror, all clammy hands and tongue firmly in cheek, with this bifurcated tale of a possessed garment wreaking supernatural havoc. Few people could get away with making a gliding piece of couture seem spooky and primal without being kitschy, or turn ridiculously verbose customer service into something both funny and unnerving. A top-notch Hammer homage, an eerily personal trip through its creator’s warped psyche and a good reminder never to buy clothes from a boutique run by a coven. 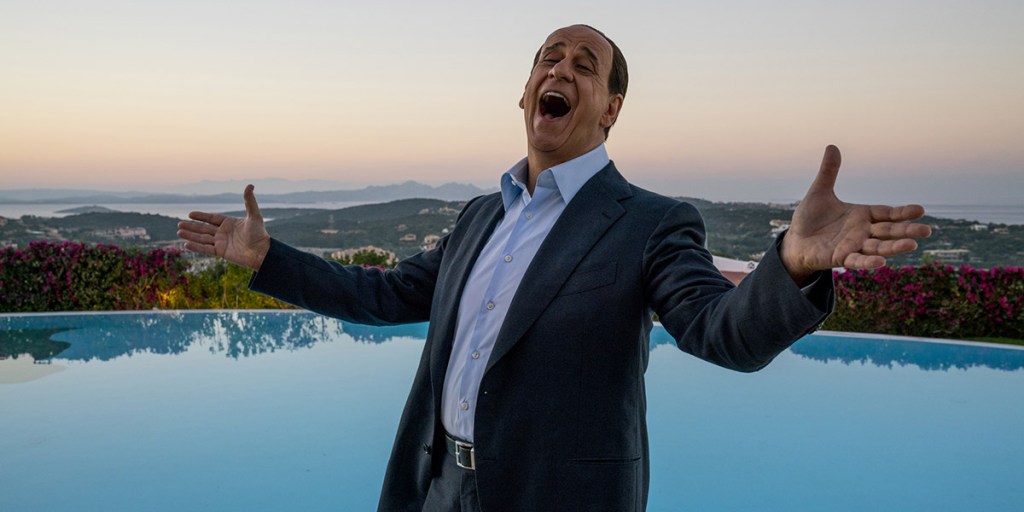 Loro
This fantastic (in all senses of the word) look at former Italian prime minister Silvio Berlusconi comes neither to bury this political Caesar nor to praise him. Instead, director Paolo Sorrentino (The Great Beauty, HBO’s The Young Pope) concocts a Felliniesque pageant around him, anchored by Toni Servillo’s baroque performance and fueled by cinema du bunga bunga spectacle. Corruption seems to spread out from this man at the center of the country’s rotten money-sex-power core, tainting everybody from his wife Veronica (Elena Sofia Ricci) to a hustler (Riccardo Scamarcio) hoping to get into Il Nuovo Duce‘s good graces. Funny, sad, eye-popping and scathing, though not necessarily in that order. 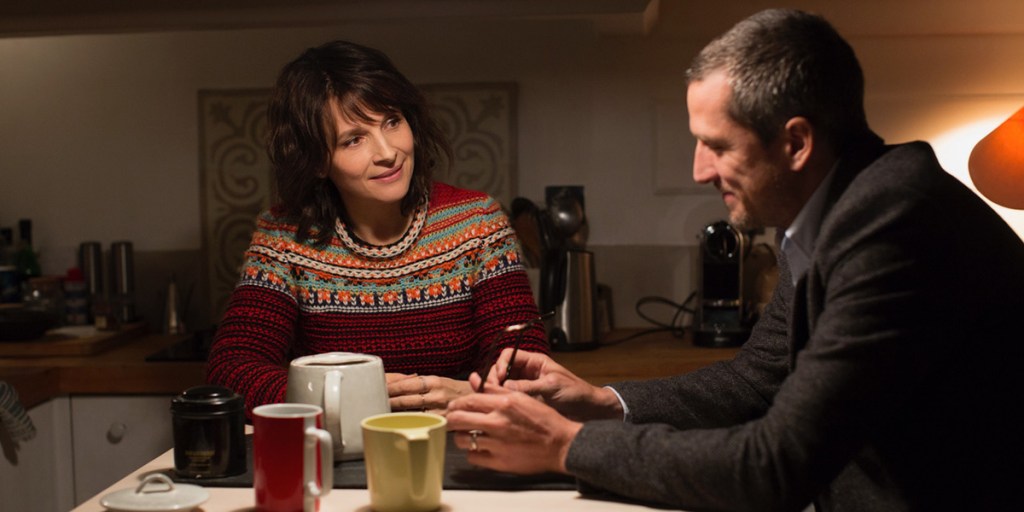 Non-Fiction
A book publisher (Guillaume Canet) tries to deal with the ever-metastasizing digital landscape of his industry, a pesky bad-boy writer (Vincent Macaigne) and a TV-star wife (Juliette Binoche) who’s trying to wriggle her way out of a role on a popular cop show. Olivier Assayas’ sharp, talky comedy takes place in the world of Literature Inc. — but any resemblance to other mediums currently suffering from distribution dilemmas, changing consumer habits and issues of cultural relevance are, of course, not the least bit coincidental. A feast of food for thought, especially if you care about how the 21st century affects your favorite 20th-century art forms. Bonus points for the greatest running Michael Haneke joke of all time. 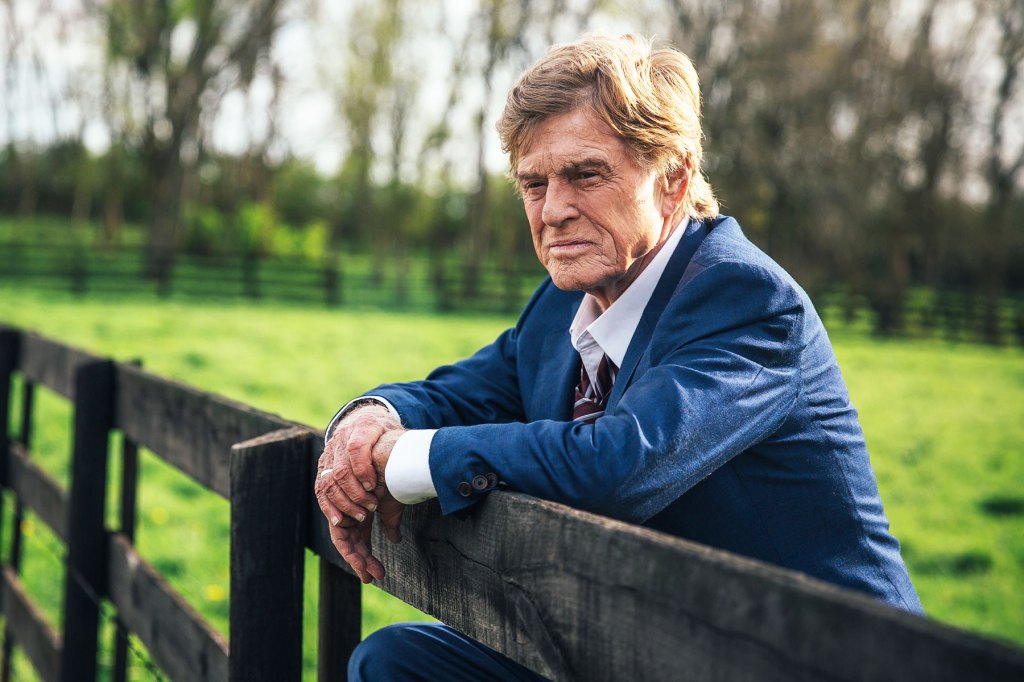 The Old Man & the Gun
Robert Redford’s last film is a swan song fit for a Seventies-cinema king: the story of Forrest Tucker, a gentleman bandit who loved robbing banks, breaking out of prisons and the ladies, especially if they’re a human sunbeam like Sissy Spacek. After decades of playing the Sundance Kid, the movie star finally gets to play Butch Cassidy — a gleam-in-the-eye rogue who views crime less as a vocation than a calling. David Lowery shoots the whole thing in a grainy 16mm, making you feel like you’ve stumbled across a lost, long-buried New Hollywood treasure. There’s a shot of Redford on a horse, riding against the horizon that will make you swoon. There’s a look that crosses Spacek’s face as she falls in love with this man at a diner that’s the acting equivalent of the first time you tasted ice cream. There’s the creeping feeling that you’ve just watched an instant classic the minute the credits roll. 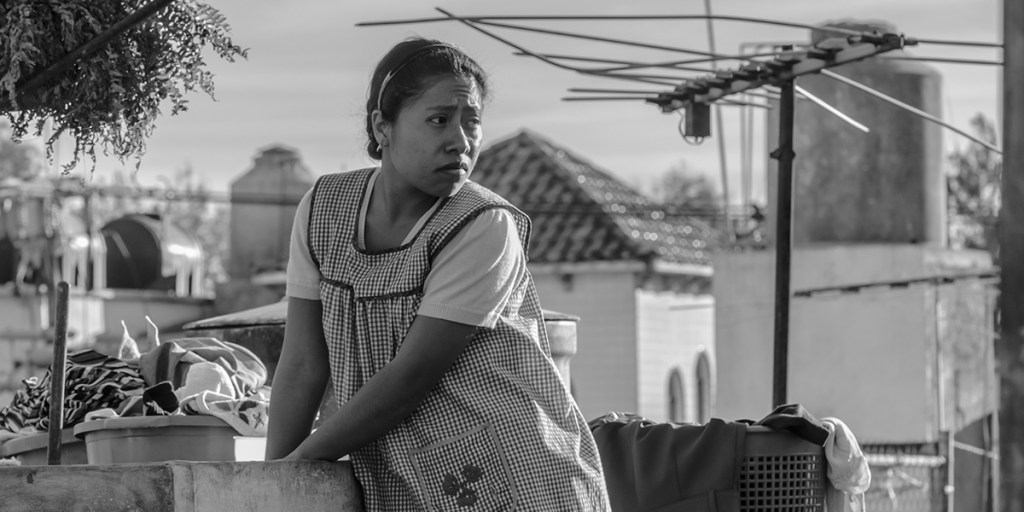 Roma
The standout of this year’s festival, a personal tale from director Alfonso Cuarón (Gravity) that wasn’t a movie so much as a time machine, whisking you back to a Mexico City circa 1970 that’s rendered in gorgeous black-and-white. Following a domestic worker named Cleo (Yalitza Aparicio, extraordinary) as she becomes an invaluable part of an upper-middle-class family’s life, falls in with an irresponsible martial-arts enthusiast/manchild and experiences the turbulence of history, this semi-autobiographical story is a triumph on every conceivable level. (Memo to Netflix: This is the dictionary definition of a movie that requires a proper theatrical experience. You have a real chance to prove to folks you are not the enemy here but may, in fact, be the savior of the Seventh Art in terms of films that aren’t obsessed with I.P. or major media branding. Don’t fuck this up. Give this masterpiece its due. It deserves it.) 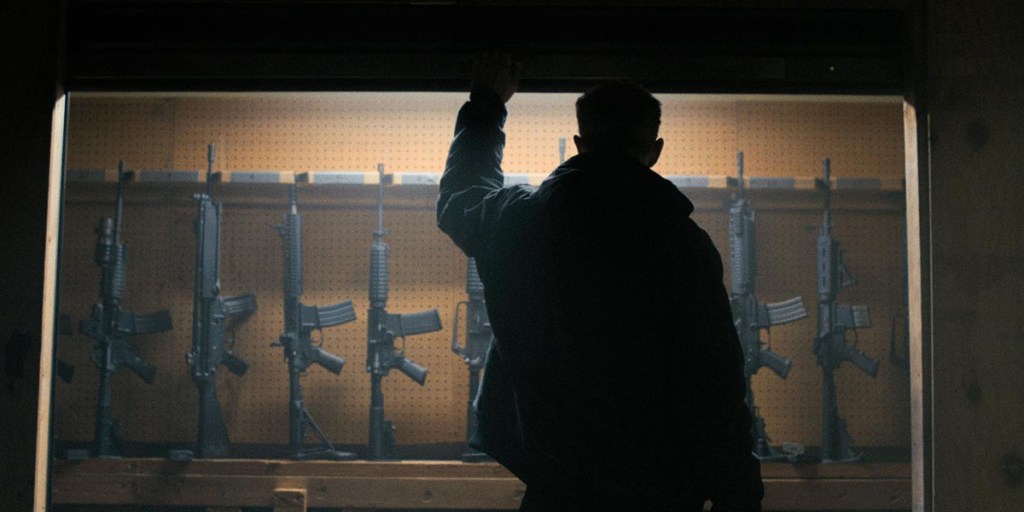 The Standoff at Sparrow Creek
A genuine out-of-left-field gem, and the stealth find of this year’s Midnight Madness program. Writer-director Henry Dunham’s debut — a tale of paranoid militia men stuck in a warehouse, trying to figure out if one of them shot up a cop’s funeral — should not work nearly as well as it does. But it’s a theatrical piece that somehow displays a surprising sense of cinematic chops, from its excellent use of widescreen compositions and negative space to some razor-sharp editing; it boasts some strong work from its character-actor ensemble, especially James Badge Dale (who also does yeoman’s work in Hold the Dark, another strong festival entry); and it turns an Agatha-Christie-mystery-as-scripted-by-David-Mamet set-up into a feature and not a bug. This one took us by surprise. 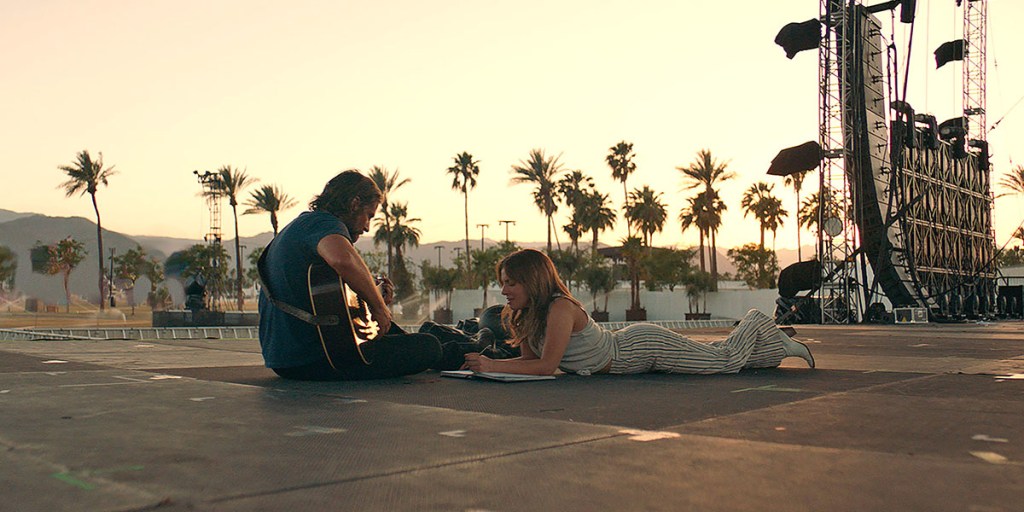 A Star Is Born
You may commence believing the hype now. The fourth remake of the old Hollywood chestnut about the fading male star and his young female ingenue ascending the ladder to success takes a page from the 1976 version — there’s a bearded country-rocker and a leading lady with a gorgeous Roman nose — then shoots this warhorse into the stratosphere. The songs, notably the soon-to-be-a-juggernaut “Shallow,” are spot-on. We knew Lady Gaga could act, but who knew she could delve this deep? We knew Bradley Cooper might be a decent director, but who knew he could step up and give this Golden Age nugget a vision so attuned to the here and now? Who knew a studio would still put out a movie like this? The first hour is absolutely perfect. The second half is merely deliriously great. 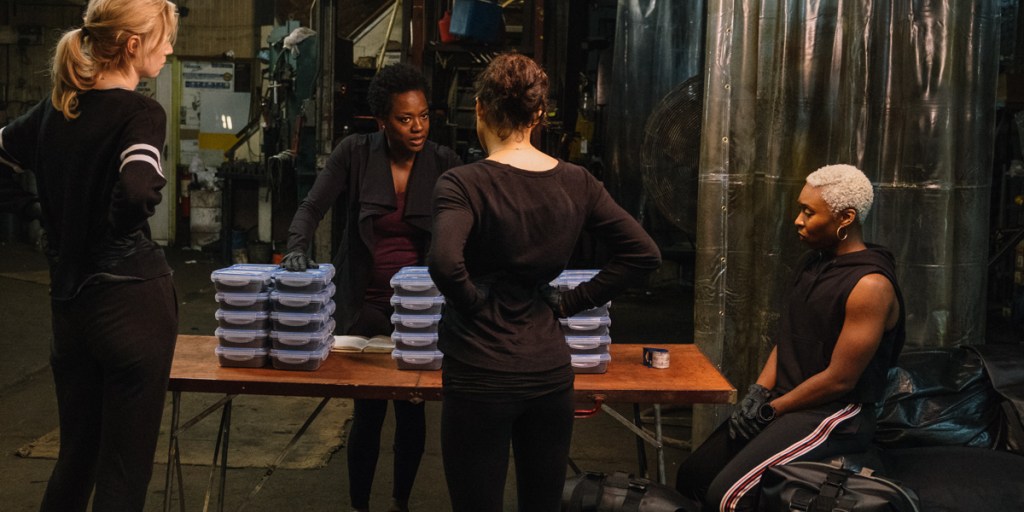 Widows
Hey, you like heist movies? How about ones starring Oscar-winning actors and directed by a world-renowned visual artist/world-class filmmaker? Like The Departed, Steve McQueen’s crime flick — an adaptation of a 1983 British miniseries — finds a director lending his distinct sensibility to a genre movie and, in the process of elevating the material, finding liberation in working with something so wonderfully pulpy. A gang of thieves is ambushed during a job; the gangsters who hired them want to know where the missing dough went, which means the criminals’ respective widows, led by Viola Davis, have to step up and rob someone else. You can tell it’s a McQueen film from the high-art visuals, the bone-white rooms and the numerous shots of people crying. As for the cast, there’s not a single bum performance in the bunch, though MVP status is a tie between Elisabeth Debicki’s reluctant criminal and Cynthia Erivo as a hairdresser brought in as a driver.