The darkest funeral dirge sounds almost peppy compared to the goth apocalypse of the Cure‘s Disintegration, a 1989 album completed under such fraught circumstances that frontman Robert Smith seriously wondered if it would be the band’s last. When they managed to endure following a series of personnel changes, Smith and Co. tackled their next project with a new, cautiously optimistic outlook.

Released in 1992, Wish would be the Cure’s commercial apex, a diverse collection of instantly accessible songs that combined Smith’s talent for creating dense lyrical thickets with some of the most tuneful melodies the group ever recorded. Though a few clouds appear on the horizon (see the heartbreaking ballad “Apart” and the epic drama of “From the Edge of the Deep Green Sea”), the album flaunts an upbeat tone. “High” is a musical sugar rush, and “Doing the Unstuck” features the shockingly un-Cure-like lines, “Kick out the gloom!/Kick out the blues!/Tear out the pages with all the bad news!”

Chief among the album’s highlights is “Friday I’m in Love,” an unrepentantly catchy pop song dripping with exuberance. It became one of the Cure’s highest charters, and also one of the most identifiable singles of their 40-year-plus career.

In spite of the album’s comparatively sunny sound, Smith balked at any suggestions that he was (gasp!) happy. “Say ‘happier.’ I’m still miserable overall,” he insisted to Spin just after Wish‘s release. “I think, words-wise, there are only two songs on the new album that are miserable, so I guess I can’t be that miserable at the moment – but I am, really. It’s that same core of despair that never goes away.” Perhaps it’s only fitting that the Cure’s next album would be titled Wild Mood Swings.

The Cure’s most pop-friendly LP to date was also among their biggest sellers, debuting at Number Two on the Billboard charts. Today Wish remains a cornerstone of the band’s catalogue and one of their most beloved works. In honor of its 25th anniversary, we look at some fascinating facts about the album’s smash single, “Friday I’m in Love.”

1. The song was recorded in Richard Branson’s rural Tudor mansion.

Virgin Records magnate Richard Branson purchased the expansive country estate Shipton Manor in 1970, installing a state-of-the-art recording studio for burgeoning artists on his label. Located near Oxford, an hour outside of London, the facility became popular with a host of major acts. Before the decade was over, Manor Studios had hosted Queen, Van Morrison, John Cale and Gene Simmons, among many others.

Ironically, this impressive rock & roll pedigree originally gave Robert Smith pause. “This place symbolized for me everything wrong with music in the mid-Seventies,” Smith told Spin from inside the studio as the band wrapped recording in early 1992. “It’s like, ‘Oh no, you’re going to the Manor and you’re gonna get hexed and end up there for like a year’s time.’ But when you get here, you realize that it was the mentality of the people who recorded here that gave it that reputation. We visited around 12 or 13 residential studios around the country. This wasn’t the best studio but it had the best atmosphere. That shows our intentions from the start.”

The Cure took a unique approach to decorating the studio during their tenure. Quotations from Wordsworth, Dickinson and other literary figures were taped to the wall, alongside magazine clippings of random objects and self-drawn cartoons that bordered on the pornographic. One noteworthy decoration was “Mary’s Manor Mad Chart,” a list of all the Manor’s staff and residents, ranked “in order of instability,” drawn up by Smith’s wife, Mary Poole. “We all voted and we had an award night,” Smith told Q in 1992. “It was very moving”

Perhaps the most unique decorative touch was an enormous mural Branson had commissioned in the atrium, depicting Boy George, Bono, Phil Collins and other members of British pop royalty, clad in gaudy neo-Renaissance attire. The Cure found the piece “grotesque,” and lightheartedly defaced it under cover of darkness by replacing Collins’ long hair with a more accurate bald pate. 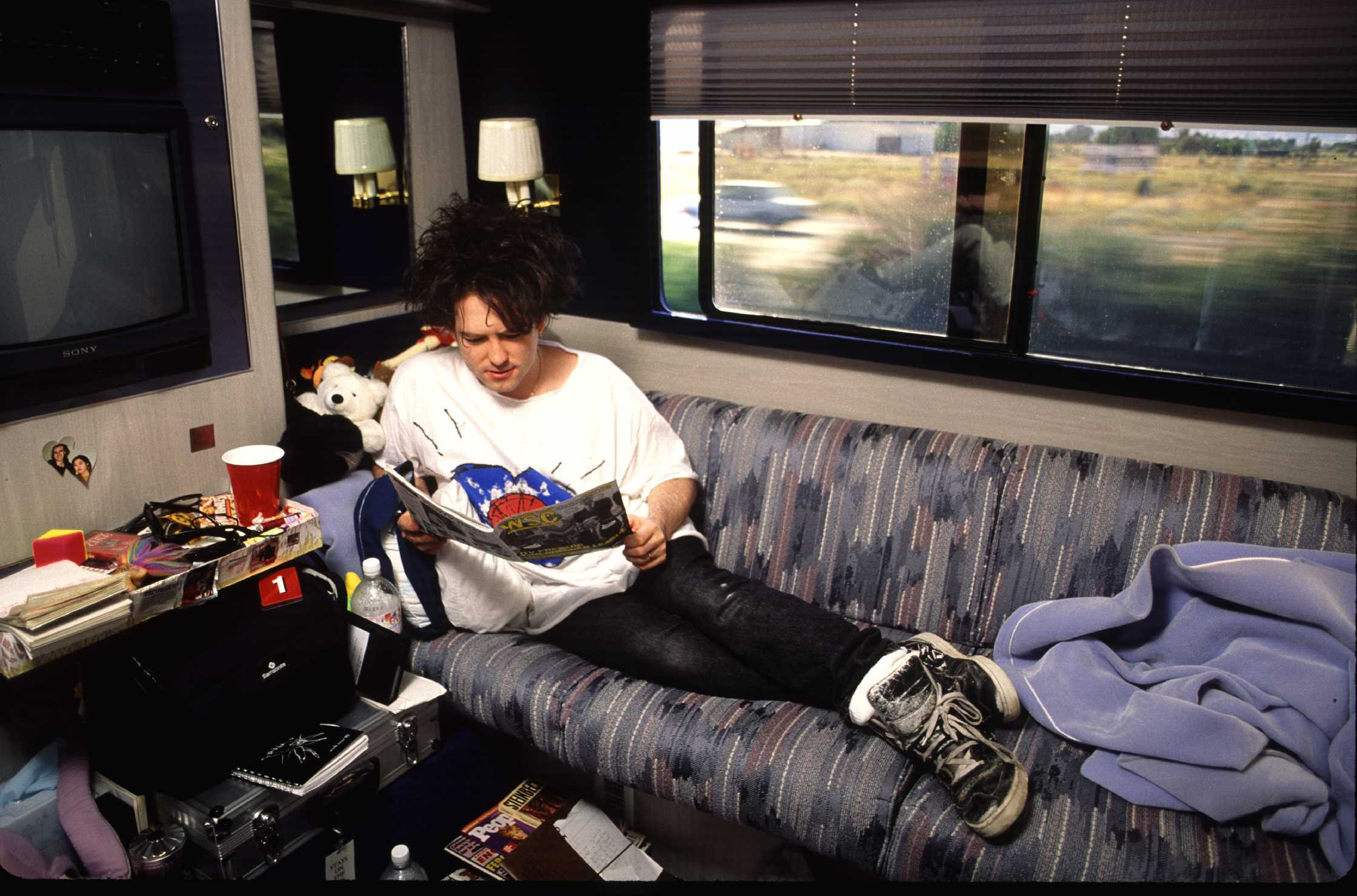 2. Robert Smith was paranoid that he had stolen the chord progression from someone else.

Smith had a difficult time believing that – much like Paul McCartney’s apparently effortless writing of “Yesterday” – he had seemingly pulled the music to “Friday I’m in Love” out of thin air. “I mean, ‘Friday I’m in Love’ is not a work of genius, it was almost a calculated song,” he admitted to NME in 2008. “It’s a really good chord progression, I couldn’t believe no one else had used it and I asked so many people at the time. I was getting drug paranoia anyway: ‘I must have stolen this from somewhere, I can’t possibly have come up with this.'”

Like McCartney, he sought out his musically inclined friends to see if they could help him place the melody. “I asked everyone I knew – everyone. I’d phone people up and sing it and go, ‘Have you heard this before? What’s it called?’ They’d go, ‘No, no, I’ve never heard it.’ On the same album there were songs which I’d slaved over and I thought at the time were infinitely better, but ‘Friday’ is probably the song off the Wish album that’s the song.”

3. Smith found the “dumb” lyrics harder to write than emotional ones.

Robert Smith is not known for having a particularly cheerful outlook, which makes an unabashedly optimistic song like “Friday I’m In Love” unique in the Cure’s canon. “‘Friday I’m in Love’ is a dumb pop song, but it’s quite excellent actually, because it’s so absurd,” he told Spin. “It’s so out of character – very optimistic and really out there in happy land. It’s nice to get that counterbalance.”

Ironically, “dumb pop songs” proved harder for Smith to write. “Genuinely dumb pop lyrics are much more difficult to write than my usual outpourings through the heart,” he continued. “I went through hundreds of sheets of paper trying to get words for this record. You have to hit something that’s not cringing – a simplicity and naiveté that communicates. There’s a dumbness that sort of cracks. We’ve always done pop songs. It’s just sometimes they’re way too down – sort of desperate.”

The lyrical concept, like many great things, came to him during a trip to the bar. “I met the others in the group outside this pub near the studios, and it was a Friday afternoon,” he said in 1997. “I’d been thinking, ‘Has anyone ever done the days of the week?’ I felt really good about [the idea], and I wrote this song on the journey.” 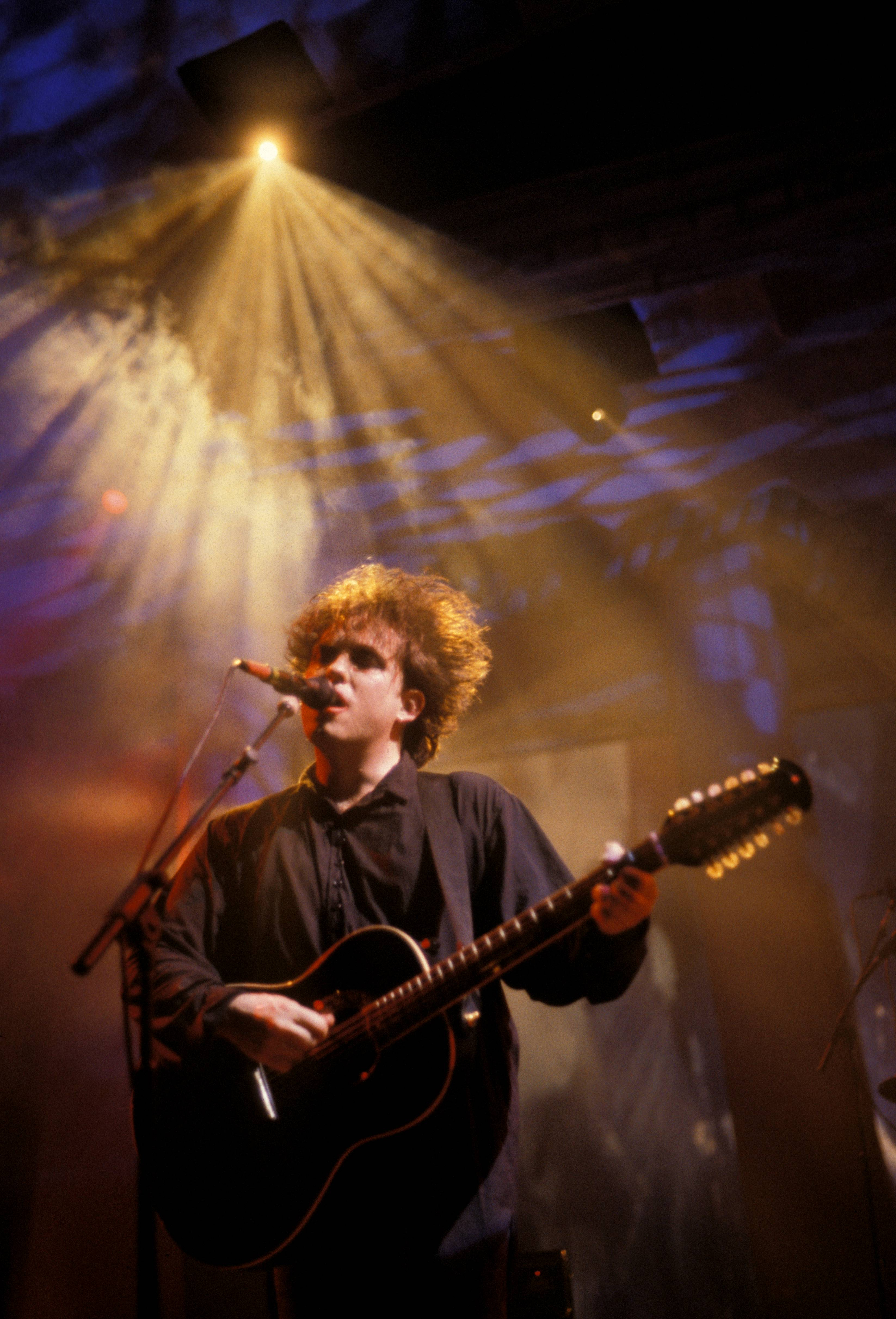 4. The song was sped up on record because of a careless tech mishap.

“Friday I’m in Love” was originally recorded in the key of D major, but the version on record was inadvertently sped up by a quarter tone. “That was an accident,” Smith admitted to Guitar Player in September 1992. “I was playing with the vari-speed [pitch control] and forgot to turn it off.” Luckily, he liked the effect that resulted. “The whole feel changed, and the fact that it’s the only song on Wish that’s not in concert pitch really lifts it out and makes it sound different. After working on the record for months, hearing something a quarter tone off makes your brain take a step backwards.”

5. The song was one of the first to feature Perry Bamonte, who had been promoted from roadie to bandmate.

Drummer, keyboardist and founding member Laurence “Lol” Tolhurst’s status in the band began to slip in the mid-Eighties due to his increasingly worsening substance abuse problems, and by the time the Cure released Disintegration, his album credit had been reduced to “other instruments.” Roger O’Donnell briefly replaced him on keyboards, before the band hired their guitar tech, Perry Bamonte, to take on a permanent role. In addition to his keyboard parts, the promoted roadie contributed guitar to Wish, adding to the album’s six-string-centric sound.

“Friday I’m in Love” is awash with glistening, Byrds-like guitars and features an ultra-trebly lead on the break. “It’s taken me a long time to come to terms with having guitar solos in our songs – I used to abhor them,” Smith told Guitar Player in 1992. “I didn’t like the whole wanky idea of stepping to the front and saying, ‘Look at me!’ But now it doesn’t bother me, because it suits what we’re now doing musically. It would have been dumb in the past to put in a guitar solo just because someone felt like playing one, but it would be equally dumb now to stop someone from doing one if that’s what the song needs to make it more exciting.”

6. The music video took only two hours to film, and features homages to silent-film pioneers.

The Cure enjoyed a long and fruitful collaboration with filmmaker Tim Pope, who directed more than 35 innovative videos for the band, starting with 1982’s “Let’s Go to Bed.” Pope’s work on “Friday I’m in Love” is a joyous expression of controlled chaos. Shots of the band on a soundstage playing with oversized toys are intercut with performance footage while vintage theatrical backdrops change seemingly at random. “We had cameras continuously running – just mucking about,” described Bamonte in a 1992 MTV interview on the set. “Lots of props and things going on, backdrop changing. And us having fun.” According to Pope, at least a few of the odd items were actually borrowed from the home of Smith’s parents.

Pope’s work frequently required long, arduous shoots, but “Friday I’m in Love” was a much breezier affair. When Smith, during a 1997 interview, named the video as one of his “favorite three” that the band had ever done, Pope quickly pointed out that it only took two hours to shoot: “And that‘s why you enjoyed it!” Brevity aside, the whimsy of the video reflects the ecstasy of the music. “It was such fun to do, and it did capture the song perfectly,” Smith continued. “They might be intertwined.”

The “Friday I’m in Love” video includes some subtle nods to pioneering silent filmmakers. A figure dressed as Oliver Hardy – of the comedy duo Laurel and Hardy – wanders through, and the planetary background props are a tribute to Georges Méliès’ 1907 short film The Eclipse: Courtship of the Sun and Moon. Pope himself makes a cameo in the video, appearing as a rocking-horse-riding director yelling, “Cut!” into a megaphone.

7. Robert Smith has an uneasy relationship with the song – and, at times, he hates it.

The popularity of “Friday I’m in Love” was a double-edged sword for the Cure. Many who learned of the band via MTV, where the video was in constant rotation, erroneously believed them to be a New Wave pop band, leading Smith to denounce his new devotees. “The people who like ‘Friday I’m in Love’ aren’t actually fans of the Cure,” he told Musikexpress in 2000. “They’re not the ones who buy my records.”

Fame would be particularly taxing on Smith, who was so wary of touring that he convinced the record label that he suffered from a non-existent flying phobia in a desperate effort to limit his commitments. “We had spent such an awful long time to get well known. [When] it happened, though, I found it very uncomfortable,” he told EW in 2007. “For a long time, I didn’t like certain songs because I thought, ‘You’re to blame, you bastard. You made me popular.’ ‘Friday I’m in Love’ is a perfect example.” Despite this complex relationship, he’s also referred to it numerous times as “one of my three favorite Cure singles ever.”