System of a Down obliterated the boundaries of modern metal with their self-titled 1998 debut, a musical Jenga tower constructed from brutal distortion, Middle Eastern melodies, proggy rhythmic shifts, kooky surrealism, raw-nerve political angst and demented circus-master shrieks. It still seems inconceivable, but the public responded to the madness, and the album went gold. But how could the band expect to match that level of originality next time out, much less top it?

In March 2001, the quartet reunited with producer Rick Rubin and entered Hollywood’s Cello Studio. After four months of relentless experimentation, they emerged with Toxicity: 44 minutes of freewheeling insanity that expanded their sonic reach with rock balladry and vocal harmonies, while digging deeper into the melodic motifs of their Armenian heritage. Three tracks with soaring choruses – “Chop Suey!,” “Toxicity” and “Aerials” – all cracked the Billboard Hot 100, catapulting the album to Number One status.

Serj Tankian on 'Personal' Film Soundtrack, State of System of a Down

System continued to evolve across their next three LPs, but Toxicity – which Rolling Stone ranked the 57th Best Album of the 2000s – remains their masterstroke. “They clearly didn’t fit, but they were so good that they transcended not fitting,” Rubin told the BBC in 2014, summarizing the band’s – and album’s – importance. “Those are the artists that I like the best.”

To celebrate its 15th anniversary, here are some lesser-known facts about the singular Toxicity.

1. The album was released a week before 9/11 and topped the Billboard 200 the week of the tragedy.
System achieved their commercial triumph during one of the most painful and precarious months in American history. As the album skyrocketed up the Billboard chart, selling 222,000 copies in its first week, its politically-oriented material was analyzed in a new light after 9/11, and Clear Channel placed the song on its list of songs with potentially “questionable” lyrics. It probably didn’t help that “Chop Suey!” – originally titled “Suicide” – includes the line “I cry when angels deserve to die.” (Granted, that list also included seemingly mild, inoffensive choices like Kansas’ “Dust in the Wind” and Phil Collins’ “In the Air Tonight.”)

After the attack, Tankian published an essay exploring 9/11’s fallout from multiple angles. “If we carry out bombings on Afghanistan or elsewhere to appease public demand, and very likely kill innocent civilians along the way, we’d be creating many more martyrs going to their deaths in retaliation against the retaliation,” he wrote. “As shown from yesterday’s events, you cannot stop a person who’s ready to die.”

2. Producer Rick Rubin offered the band crucial feedback on their reliably demented lyrics – even though he had no idea what they meant.
From “wired were the eyes of a horse on a jet pilot” to “pull the tapeworm out of your ass,” Tankian and Malakian crafted some of the most vividly perplexing lyrics in rock history on Toxicity. Rubin ate up the absurdity, helping to foster the band’s unorthodox approach. In a 2015 Genius annotation for the title track (though most likely referring to the album’s other signature song, “Chop Suey!”), the Zen master explained: “Serj didn’t have words for the bridge. We were at my house doing the vocals and working on the idea, and I remember the idea of the father happening and then us trying to make it biblical in that way. It’s really heavy.”

“I don’t know what it means, but I know how it makes me feel,” he gushed of the band’s linguistic style. “It’s like a lot of Neil Young songs, where the lyrics don’t necessarily make sense, but they give you this feeling of something going on. This does that. And it goes from that wackiness of the verse to the epic sadness of the chorus. It’s so weird. And listen to how much harmony there is. Vocal harmonies — no one has vocal harmonies.”

3. In contrast to the band’s first album, guitarist Daron Malakian went wild with overdubs on Toxicity.
Malakian took a minimalist approach on System of a Down, rarely padding his riffs with extra overdubs. But his playing exploded on Toxicity: Take the intro to “Chop Suey!,” on which he layers acoustic guitar and twin electric leads before lurching into a thick wall of distortion.

“I know what I’m doing,” he told MTV before the release. “There are just certain things that I thought could have been better from the last record … I knew what I wanted to do with the guitars to make it more furious. On the last record, there were two tracks of guitars. On this record, there’s 12 tracks on each song.”

Universal Pictures clearly didn’t look beyond the surface level of this dizzying track, which they incorporated into their animated 3-D comedy (and its corresponding soundtrack). It’s easy to imagine SOAD cracking up as they watched a poodle headbanging to their song about group sex.

5. Metallica were huge fans of the album.
Both Kirk Hammett and Lars Ulrich are hardcore System devotees, which they proved with their Rolling Stone ballots for the Best Albums and Songs of the 2000s. Ulrich named Toxicity the second-best album of the decade, with Mesmerize following at Number 16; he also voted for “Toxicity” and “B.Y.O.B.” on the songs list. Hammett named Mesmerize the second-best album of the decade and “Violent Pornography” the 16th-best song. At a November 2003 concert promoting Steal This Album!, Hammett even joined SOAD onstage to play “Aerials,” Toxicity‘s poignant centerpiece. 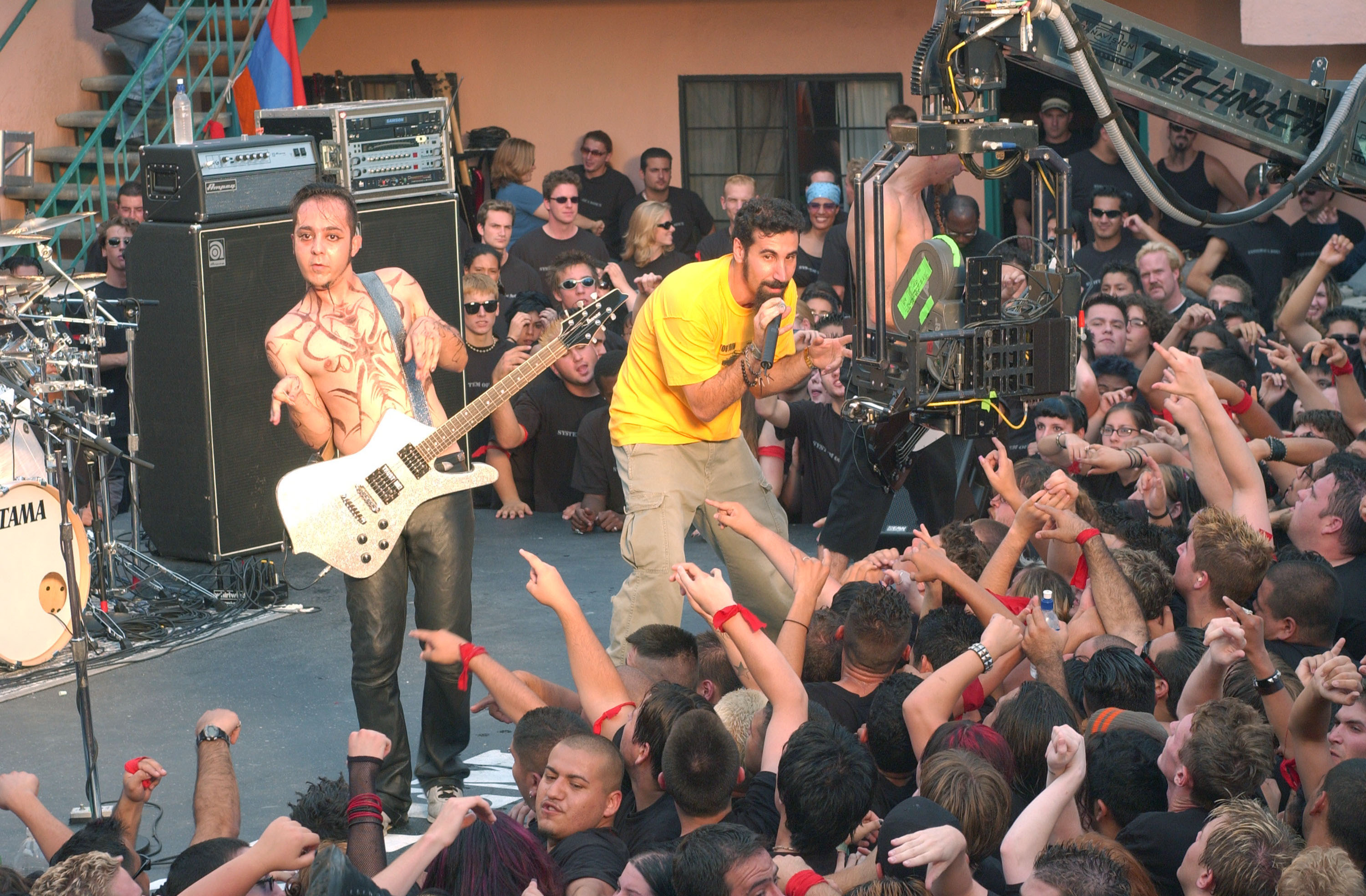 6. The band viewed hidden track “Arto” – their first song without guitars – as a crucial creative breakthrough.
After 14 shapeshifting tracks, Toxicity closes with its biggest curveball. “Arto,” named after guest musician Arto Tunçboyacıyan, features a snaking duduk solo from the Armenian jazz/folk player, backed by percussion and lush chanting from the band.

“There’s no guitars or anything on that one,” bassist Shavo Odadjian proudly told MTV. “We used these Armenian instruments and we all chanted. It’s really emotional, and my mom cries every time she hears it. I wanted to remember all the Armenians that died in 1915 during the genocide.”

7. At one point during the sessions, Malakian and drummer John Dolmayan beat each other up severely – but later viewed the showdown as a badge of honor.
SOAD is one of rock’s most visceral live bands – they’ve been known to stage-dive, flail around violently and even tackle each other. During the Toxicity sessions, that animalistic passion almost got the best of them.

“There were times when we fuckin’ threw down,” Malakian told journalist Jon Wiederhorn. “John and I were totally going at it. My lip was all cut up, and I took a microphone stand and hit him across the head and his head was all bashed in. Shavo and Serj were looking at us saying, ‘Awww, man, we’re done.’ But right after we fought, we took each other to the hospital and got stitched up right next to each other. Both of us were sitting there laughing, saying, ‘This is one of the coolest moments in the history of our band.'”

8. The Beatles helped the band learn how to balance the wacky metal aggression of their early work with concise pop song structures.
“Going into [Toxicity], I knew Serj wanted to sing more, so I guess that was a kind of a progression and an evolution for the band,” Malakian reflected in 2005. “I wanted to do all that, yet not lose the heaviness of the band and I guess the hard, punk, metal aspect. You could lose that sometimes when you get a little too eclectic. So we were just trying to balance that fine line and not lose the fans.”

With Toxicity, System proved they were more than shock artists, capable of crafting as many hooks as odd time changes.

“The Beatles made me realize song structure, putting things into three minutes – compress these things,” Malakian told Guitar.com. “Maybe take some things out, which as a songwriter I think is the hardest thing in the world. It’s easy to keeping throwing ideas in because you love all your ideas. But to make the song great, you gotta sometimes pull things out and that’s the hardest part. What part of the song do you pull out to make it great? That’s the biggest challenge.”

9. System wrote more than 40 songs for Toxicity.
SOAD were exploding with creativity in the studio: The quartet wrote roughly 45 songs and recorded 33, with no idea how to whittle the results down to one track list. “It took us a long time to even approach that subject,” Dolmayan told MTV. “It was really tough,” Odadjian added. “We all had to choose from all those great songs. We had to pick 17 that Andy [Wallace] mixed, and out of those 17 we had to pick 14 that made the album.”

The next summer, unfinished versions of the other 16 tracks wound up on file-sharing sites (packaged as Toxicity II), leaving the band puzzled on how to proceed. “These tracks are unfinished and don’t reflect the group’s high standards of recorded sound,” the group said in a statement. “We are disappointed that our fans are listening to anything less than the best possible recordings from System of a Down.”

But SOAD ultimately handled the annoyance with their trademark subversive charm. After re-recording most of the material and re-shaping the track list, they released the cleverly titled Steal This Album!, packaged in a CD jewel case with no artwork.

10. The brooding “ATWA” was inspired in part by Malakian’s fascination with Charles Manson.
With its melancholy lullaby lyrics (“Hey you, see me, pictures crazy/ All the world I’ve seen before me passing by”) and relatively concise arrangement, “ATWA” is one of Toxicity‘s least surreal moments. But its inspiration is the most surprising: The acronym “ATWA” – “Air, Trees, Water, Animals” – was coined by notorious convict Charles Manson as a term to promote harmony through nature.

“It’s something that he tends to really be focused on,” Malakian said in an interview promoting the LP. “Even his so-called ‘family’ that he’s had: There was a method behind what happened there. … The Charles Manson everybody sees on television – everything is always one-sided on television … I don’t agree with killing anybody. I don’t agree with going in and slashing anybody’s throats or anything, writing shit on the walls. That’s not what I’m into. That’s not the side of the Charles Manson that I’m into. It’s more of his ideas and his thoughts on society.”