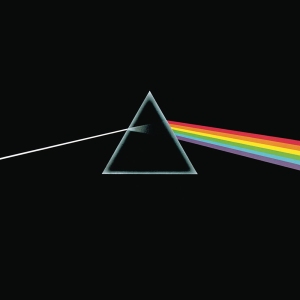 The principal creators of Pink Floyd‘s masterpiece The Dark Side of the Moon all spoke with Rolling Stone senior writer Brian Hiatt. In this conversation with Storm Thorgerson, the band’s graphic designer explains how he created the record’s iconic cover.

At what point were you introduced to the Dark Side material? Did you go to the shows where they played it or did you hear some of the demos?
I heard a bit in the studio. I don’t have much to say about music. Usually I like it, and I just absorb it. I don’t have much to say, and they ain’t let me say anything anyway. They say “For God’s sake, Storm, do not harm our song. Do not murder our tune.” So I never say anything, really, about the music. I just let it go over,  really, I suppose. It’s my job to reinterpret it, really. So it doesn’t really matter what I think, it matters what comes out the other end. And with Dark Side it was very much about the madness of the lyrics and about something that Rick said to me. He said “Could we not have one of your funny pictures, Storm?” and I said “What do you mean? That’s what I do. Pictures. How about a change?” I said “But I don’t do graphics.” He said “Well, why is it a challenge?”

Did the idea of the prism in some way relate to what you were hearing on the record directly?
No, it related mostly to a light show. They hadn’t really celebrated their light show. That was one thing. The other thing was the triangle. I think the triangle, which is a symbol of thought and ambition, was very much a subject of Roger’s lyrics. So the triangle was a very a useful – as we know, obviously – was a very useful icon to deploy and making it into the prism – you know, the prism belonged to the Floyd.

Pink Floyd's 'Dark Side of the Moon': 10 Things You Didn't Know

According to legend, was there one version of the cover that had the Silver Surfer, the Marvel Comics character?
Yeah, a photographic version, but they turned it down.

What do you mean a photographic version? You actually painted someone silver and put them on a surfboard?
Probably. I don’t know, I never got to do it, did I? I did a drawing. Unfortunately we lost them, otherwise they’d be straight to your inbox. We can’t find them.

Marvel Comics might have stopped you from doing that anyway, right?
Well, I think because it was photographic, they couldn’t really do much. I mean. think about it, it wouldn’t be the Silver Surfer, it would be a man on a surfboard. I was more interested in the wave, actually. I was interested in a tiered wave, because I thought it was a very good representation of the Floyd and the fans. I don’t think you can copyright a wave. Or can you?

Well, no, not a wave. He surfed in space, anyway.
Exactly. So I think that I probably would have gotten away with it, but they didn’t like it anyway, so it was thrown out.